RUSSIA MUST END THIS WAR 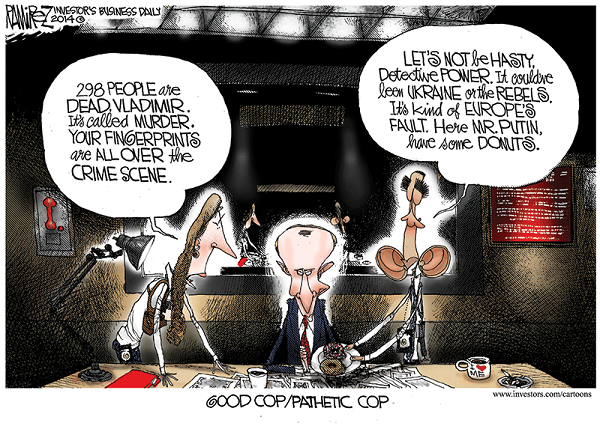 [This is the statement of US Ambassador to the United Nations Samantha Power delivered to the UN Security Council on Friday, July 18]

Yesterday, we were all shocked by the downing of Malaysian Airlines Flight 17. All 298 people aboard – 283 passengers and 15 crew – were killed. As we stared at the passenger list yesterday we saw next to three of the passengers names a capital "I." As we now know, the letter "I" stands for infant.

To the families and friends of the victims, it is impossible to find words to express our condolences. We can only commit to you that we will not rest until we find out what happened. A full, credible, and unimpeded international investigation must begin immediately. The perpetrators must be brought to justice. They must not be sheltered by any member state of the United Nations.

Let me share with you our assessment of the evidence so far.

We assess Malaysian Airlines Flight 17 carrying these 298 people from Amsterdam to Kuala Lumpur was likely downed by a surface-to-air missile, an SA-11, operated from a separatist-held location in eastern Ukraine.

The Ukrainians do have SA-11 systems in their inventory. However, we are not aware of any Ukrainian SAM systems in the area of the shoot-down. And, more importantly, since the beginning of this crisis, Ukrainian air defenses have not fired a single missile, despite several alleged violations of their airspace by Russian aircraft.

If indeed Russian-backed separatists were behind this attack on a civilian airliner, they and their backers would have good reason to cover up evidence of their crime. Thus, it is extremely important that an investigation be commenced immediately.

In the first instance, the OSCE Special Monitoring Mission should act as a first responder, laying the foundation for efforts by other international organizations and individual nations including those whose citizens who were victims of this tragedy. Yesterday, President Obama assured Ukraine’s President Poroshenko that U.S. experts will offer all possible assistance upon his request. President Poroshenko has invited the independent and credible International Civil Aviation Organization to join an investigation.

International investigators must be granted immediate, full, and unfettered access to the crash site. All those concerned – Russia, pro-Russian separatists, and Ukraine – should agree to support an immediate ceasefire to facilitate access by international investigators. In this regard, we look to the SMM also to reach agreement with separatists and others in the region to make this possible.

All evidence must remain undisturbed, and any evidence removed from the site by the Russian-backed separatists operating in the area should be promptly returned and handed over. Russia needs to help make this happen.

While it may take us some time to firmly establish who shot down a plane filled with innocents, most Council members and most members of the international community have been warning for months about the devastation that would come if Russia did not stop what it started, if it did not reign in what it unleashed.

The context for yesterday’s horror is clear: separatist forces – backed by the Russian government – continue to destabilize Ukraine and undermine the efforts of Ukraine’s elected leaders to build a democratic Ukraine that is stable, unified, secure, and able to determine its own future.

Russia says that it seeks peace in Ukraine, but we have repeatedly provided this Council with evidence of Russia’s continued support to the separatists. Time after time, we have called on the Russian government to de-escalate the situation, by stopping the flow of fighters and weapons into Ukraine, pressing separatists to agree to a cease-fire and release all hostages, and support a roadmap for negotiations.

Time after time, President Putin has committed to working towards dialogue and peace: in Geneva in April, in Normandy in June, and in Berlin earlier this month. And every single time, he has broken that commitment.

Here is what we know:

It is because of these continued destabilizing Russian actions that the United States imposed sanctions on the defense, energy, and financial sectors of the Russian economy-including financial institutions. These measures include freezing the assets of Russian defense companies and blocking new financing of some of Russia’s most important banks and energy companies.

The message is unified and clear: If President Putin continues to choose escalation over de-escalation, the international community will continue to impose costs on Russia.

But this is not what any of us want. We and our allies remain committed to a diplomatic solution, as are the Ukrainian government and the Ukrainian people, who have seen their neighbors, friends, and family members killed in a needless conflict.

President Poroshenko has consistently backed up his words with actions. He proposed a comprehensive peace plan and declared a unilateral ceasefire, both of which were cynically rejected by the illegal armed groups and their backers in Moscow.

President Poroshenko’s plan offered amnesty to separatists who lay down their arms voluntarily, and who are not guilty of capital crimes.

He committed to providing a safe corridor for Russian fighters to return to Russia; he established a job creation program for the affected areas; included an offer of broad decentralization and dialogue with eastern regions, including the promise of early local elections; and granted increased local control over language, holidays, and customs.

President Poroshenko also has reached out to the residents of eastern Ukraine and is pursuing constitutional reform which will give local regions more authority to choose their regional leaders and protect locally-spoken languages. He has said he will meet with separatist at any safe location inside or outside of Ukraine.

The United States’ goal throughout the crisis in Ukraine has been consistent: to support a stable, peaceful, and democratic Ukraine. We will not be satisfied with a temporary halt to violence. Russia must stop destabilizing Ukraine, and allow all of the people of Ukraine to decide their country’s future through a democratic political process.

As we sit here, the remains of nearly 300 people – of innocent infants, children, women, and men – are strewn across a blackened, smoldering landscape in Ukraine. Those victims came from at least nine different nations. They could just as easily have come from any of ours. We must treat all of them as our own victims.

We have a duty to each and every one of those individuals, their families, and their countries to determine why that jet fell out of the sky and to hold the perpetrators accountable. We must stop at nothing to bring those responsible to justice.

This appalling attack occurred in the context of a crisis that has been fueled by Russian support for separatists — through arms, weapons, and training — and by the Russian failure to follow through on its commitments and by its failure to adhere to the fundamental principles of the UN Charter.

This tragedy only underscores the urgency and determination with which we insist that Russia immediately take concrete steps to de-escalate the situation in Ukraine, support a sustainable cease-fire, and follow the path toward peace that the Ukrainian government has consistently offered.