RUSSIA IS LITERALLY DYING OFF 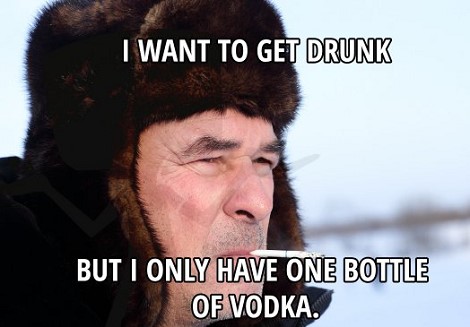 The population of the Russian Federation is falling by 700 people a day, or more than a quarter of a million a year (Narzur.ru, September 23).

The decline stems from a combination of rising death rates, changes in the age structure of the population (resulting in fewer women in the prime child-bearing cohort but more elderly), dramatically falling immigration rates, and ever greater shortages of medicines and even medical facilities.

And of course, alcoholism off the world scale.

Some of these factors are the product of long waves of demographic development—the echoes of echoes of deaths in World War II, as Russian officials say.

But most are the result of specific government policies, including reductions in the number of hospitals, sanctions against medicines previously imported from abroad, restrictions on immigration, and failures to enforce either anti-drinking measures or health rules governing the quality of food.

Ever more Russian analysts are describing the current demographic situation as a disaster for the future, one that may make it increasingly difficult for that country to field a sizeable military or generate economic growth.

In recognition of this, Prime Minister Dmitry Medvedev recently declared that addressing these negative population growth problems has become a priority for next year’s budget. Numerous observers note that many of these problems took a long time to arise and will take at least as long to resolve.

But if these problems are not addressed soon and more effectively than they have been in the past, Russia’s population could decline by more than ten million by mid-century (Demoscope.ru, September 20).

This portrait of Russia’s demographic decline is provided by the Russian government’s own statistics agency, Rosstat. It says that in the first seven months of this year, there were 928,900 births in Russia, approximately 40,000 fewer than for the same period in 2017.

Furthermore, the agency notes that the number of deaths had risen by 15,000 over the same period to 1,099,000. For Russia as a whole, deaths now outnumber births by a factor of 1.2; and in some regions, especially predominantly ethnic-Russian ones, the relationship between births and deaths is far worse (APN, September 23).

Only in predominantly Muslim republics in the North Caucasus is the situation better because there are more younger women in their populations and they still have more children on average than Russian ones do. Moscow has sought to counter this by not making maternal capital payments to North Caucasians, citing budgetary shortfalls (Capost.media, October 1).

The consequences of this pattern are already obvious.

Since the end of Soviet times, the population of Murmansk Oblast has fallen by 34 percent, of Sakhalin by 31 percent, and of Arkhangelsk by 26 percent, with these declines increasing in rapidity over time. Moreover, there have been declines of 25 percent or more in Russian regions like Amur, Kirov, Ivanovo, Tver and Kostroma Oblasts, and of 15 percent or more in Vladimir, Ryazan, and Oryol Oblasts.

Meanwhile, the populations of the predominantly Muslim republics in the North Caucasus in particular have grown by almost equal amounts.

Yet another factor depressing fertility rates among Russian women while they remain relatively higher among Muslim ones is that the former are far more likely to delay the appearance of their first child in order to pursue an education or careers—a pattern still far less true among Russia’s Muslim women (Izvestia, October 3; Snob.ru, September 24).

This pattern largely reflects deep-seated trends rather than specific government policies, but not entirely. Among the moves the Russian government has made in recent years that have depressed the size of the population are the following:

And it is cutting the number of medical facilities even in major cities like St. Petersburg, where officials seem more concerned about having churches close by to where people live than ensuring accessible medical care (Kasparov.ru, October 3).

To date, the government has not developed any effective policy against unregistered alcohol. At the very least, international health officials say, alcohol in its various forms remains “the main cause of death” in Russia (Thinktanks.by, October 3).

That dire picture may come as a shock to those who have repeatedly heard Vladimir Putin talk about increases in life expectancy in Russia. But in truth, those increases are the artifact of a statistical quirk.

From Soviet times on, Moscow has sought to drive down infant mortality, achieving significant success and allowing it to claim ever longer life expectancy from birth. It has not made a similar commitment to reducing mortality rates among older groups since doing so would not have given it the propaganda victory it craves.

However, it is the death rates that are the root of the problem, which Moscow’s own policies have been exacerbating for decades.  When a country’s death rates greatly exceed birth rates, as in the case of Russia, that country is literally dying off.