2 The Point News » Behind The Lines » Free Articles » RUNWAY ABLE

Tinian Island, Pacific Ocean.  It’s a small island, less than 40 square miles, a flat green dot in the vastness of Pacific blue.  Fly over it and you notice a slash across its north end of uninhabited bush, a long thin line that looks like an overgrown dirt runway.  If you didn’t know what it was, you wouldn’t give it a second glance out your airplane window. 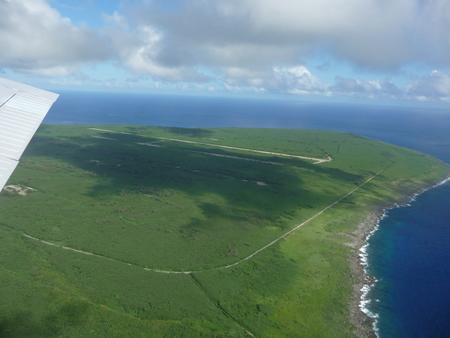 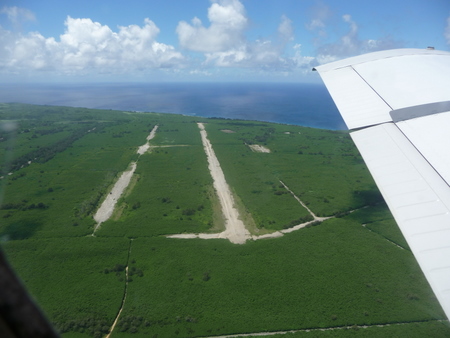 On the ground, you see the runway isn’t dirt but tarmac and crushed limestone, abandoned with weeds sticking out of it.  Yet this is arguably the most historical airstrip on earth.  This is where World War II was won.  This is Runway Able: 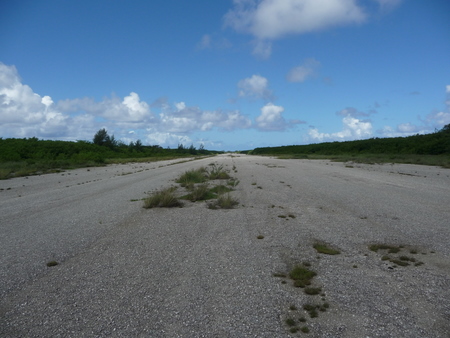 On July 24, 1944, 30,000 US Marines landed on the beaches of Tinian.  Eight days later, over 8,000 of the 8,800 Japanese soldiers on the island were dead (vs. 328 Marines), and four months later the Seabees had built the busiest airfield of WWII – dubbed North Field –  enabling B-29 Superfortresses to launch air attacks on the Philippines, Okinawa, and mainland Japan.

Late in the afternoon of August 5, 1945, a B-29 was maneuvered over a bomb loading pit, then after lengthy preparations, taxied to the east end of North Field’s main runway, Runway Able, and at 2:45am in the early morning darkness of August 6, took off.

The B-29 was piloted by Col. Paul Tibbets of the US Army Air Force, who had named the plane after his mother, Enola Gay.  The crew named the bomb they were carrying Little Boy.  6½ hours later at 8:15am Japan time, the first atomic bomb was dropped on Hiroshima.

Three days later, in the pre-dawn hours of August 9, a B-29 named Bockscar (a pun on "boxcar" after its flight commander Capt. Fred Bock), piloted by Major Charles Sweeney took off from Runway Able.  Finding its primary target of Kokura obscured by clouds, Sweeney proceeded to the secondary target of Nagasaki, over which, at 11:01am, bombardier Kermit Beahan released the atomic bomb dubbed Fat Man.

Here is "Atomic Bomb Pit #1" where Little Boy was loaded onto Enola Gay: 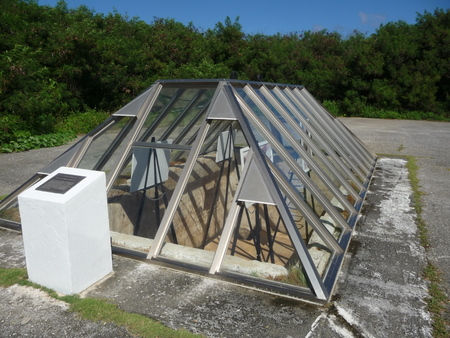 There are pictures displayed in the pit, now glass-enclosed.  This one shows Little Boy being hoisted into Enola Gay‘s bomb bay. 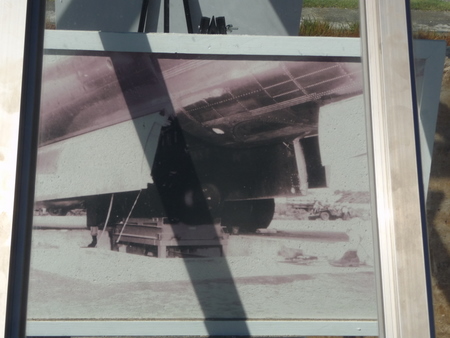 And here on the other side of ramp is "Atomic Bomb Pit #2" where Fat Man was loaded onto Bockscar. 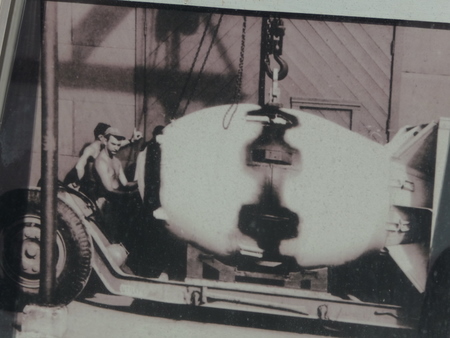 The commemorative plaque records that 16 hours after the nuking of Nagasaki, "On August 10, 1945 at 0300, the Japanese Emperor without his cabinet’s consent decided to end the Pacific War."

Take a good look at these pictures, folks.  This is where World War II ended with total victory of America over Japan.  I was there all alone.  There were no other visitors and no one lives anywhere near for miles.  Visiting the Bomb Pits, walking along deserted Runway Able in solitude, was a moment of extraordinarily powerful solemnity.

It was a moment of deep reflection.  Most people, when they think of Hiroshima and Nagasaki, reflect on the numbers of lives killed in the nuclear blasts – at least 70,000 and 50,000 respectively.  Being here caused me to reflect on the number of lives saved – how many more Japanese and Americans would have died in a continuation of the war had the nukes not been dropped.

Yet that was not all.  It’s not just that the nukes obviated the US invasion of Japan, Operation Downfall, that would have caused upwards of a million American and Japanese deaths or more.  It’s that nuking Hiroshima and Nagasaki were of extraordinary humanitarian benefit to the nation and people of Japan.

Let’s go to this cliff on the nearby island of Saipan to learn why:

Saipan is less than a mile north of Tinian..  The month before the Marines took Tinian, on June 15, 1944, 71,000 Marines landed on Saipan.  They faced 31,000 Japanese soldiers determined not to surrender.

Japan had colonized Saipan after World War I and turned the island into a giant sugar cane plantation.  By the time of the Marine invasion, in addition to the 31,000 entrenched soldiers, some 25,000 Japanese settlers were living on Saipan, plus thousands more Okinawans, Koreans, and native islanders brutalized as slaves to cut the sugar cane.

There were also one or two thousand Korean "comfort women" (kanji in Japanese), abducted young women from Japan’s colony of Korea to service the Japanese soldiers as sex slaves.  (See The Comfort Women: Japan’s Brutal Regime of Enforced Prostitution in the Second World War, by George Hicks.)

Within a week of their landing, the Marines set up a civilian prisoner encampment that quickly attracted a couple thousand Japanese and others wanting US food and protection.  When word of this reached Emperor Hirohito – who contrary to the myth was in full charge of the war – he became alarmed that radio interviews of the well-treated prisoners broadcast to Japan would subvert his people’s will to fight.

As meticulously documented by historian Herbert Bix in Hirohito and the Making of Modern Japan, the Emperor issued an order for all Japanese civilians on Saipan to commit suicide.  The order included the promise that, although the civilians were of low caste, their suicide would grant them a status in heaven equal to those honored soldiers who died in combat for their Emperor.

And that is why the precipice in the picture above is known as Suicide Cliff, off which over 20,000 Japanese civilians jumped to their deaths to comply with their fascist emperor’s desire – mothers flinging their babies off the cliff first or in their arms as they jumped.

Anyone reluctant or refused, such as the Okinawan or Korean slaves, were shoved off at gunpoint by the Jap soldiers.  Then the soldiers themselves proceeded to hurl themselves into the ocean to drown off a sea cliff afterwards called Banzai Cliff.  Of the 31,000 Japanese soldiers on Saipan, the Marines killed 25,000, 5,000 jumped off Banzai Cliff, and only the remaining thousand were taken prisoner.

The extent of this demented fanaticism is very hard for any civilized mind to fathom – especially when it is devoted not to anything noble but barbarian evil instead.  The vast brutalities inflicted by the Japanese on their conquered and colonized peoples of China, Korea, the Philippines, and throughout their "Greater East Asia Co-Prosperity Sphere" was a hideously depraved horror.

And they were willing to fight to the death to defend it.  So they had to be nuked.  The only way to put an end to the Japanese barbarian horror was unimaginably colossal destruction against which they had no defense whatever.  Nuking Japan was not a matter of justice, revenge, or it getting what it deserved.  It was the only way to end the Japanese dementia.

And it worked – for the Japanese.  They stopped being barbarians and started being civilized.  They achieved more prosperity – and peace – than they ever knew, or could have achieved had they continued fighting and not been nuked.  The shock of getting nuked is responsible.

We achieved this because we were determined to achieve victory.  Victory without apologies.  Despite perennial liberal demands we do so, America and its government has never apologized for nuking Japan.  Hopefully, America never will.

Today, America is faced with another barbaric evil that wishes to destroy it.  A greater danger than Islamofascist terrorism or Chicom subversion and imperialism.  A barbarism that demands America jump off a Suicide Cliff, and has been doing its fanatical best to push America off that Suicide Cliff for the past two years.

The explicit goal of the Democrat Fascist Party has become the destruction, the suicide, of American freedom and prosperity.

How Democrats became this way is not the question, any more than how the Japanese became demented.  The question is:  are enough Americans determined to do what it takes to stop the Democrats’ attempt to destroy their own country?

At this moment, with November 2nd little more than three weeks away, the answer seems to be yes.  But this only brings up an even more critical question:  will enough Republicans in Congress be determined to do what it takes to stop Democrats from destroying their own country?

Will they have enough nerve to politically nuke Democrats in Congress, in the White House, and in the regulatory agencies?

Will they have enough nerve to defund not just ObamaCare but entire federal agencies such as the Department of  Education and the EPA?  To make federal public employee unions illegal and defund their exorbitant rip-the-taxpayer-off pension plans?  To eliminate capital gains taxes and sales taxes on gold?  To privatize Social Security similar to how Chile successfully did it?

The list goes on and it is politically as radical as nuking Japan was militarily.  But the latter was required to end World War II and the former is required to save the greatest economy in man’s history from doom.

A real fear is that John Boehner is no Harry Truman.  Truman gave the order for those two B-29s to take off from Runway Able.  Can Boehner do the political equivalent, or does he want to be nice and liked instead?  On November 3rd, the results will be in, our B-29s loaded and gassed up on Runway Able.

The Dems need to be nuked.  It would save America and save them too, for it just might make them civilized again.  Don’t wimp out, Speaker-to-be Boehner.  Order your planes to take off on Runway Able.

Note:  Tinian and Saipan, along with a third island, Rota, form a very interesting political jurisdiction, The Commonwealth of the Northern Mariana Islands or CNMI, which both is and is not a part of the U.S.  It is directly north of Guam (the islands north of Saipan are currently uninhabited).: 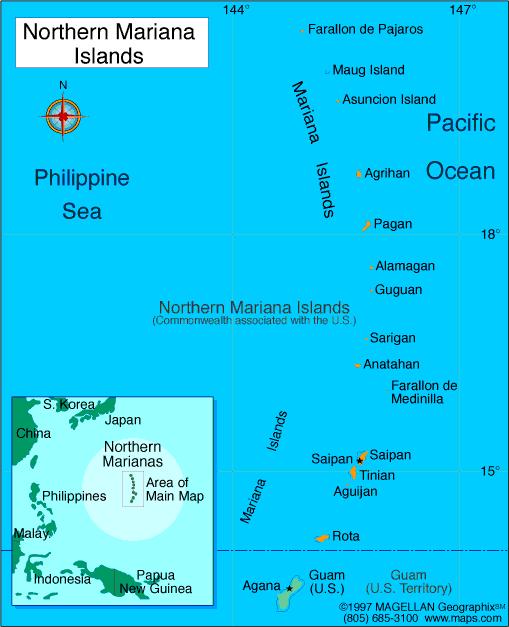 I am here on business, for CNMI is open for business.  CNMI-based companies do not pay US corporate taxes but CNMI corporate taxes of 6%.  CNMI residents (who are US citizens) do not pay federal income taxes to the IRS, but pay CNMI income taxes of 9%.  The CNMI is one of the best kept secrets in the tax-haven world.  I’ll be telling you more about this as I learn more.

Oh, yes… Guinness lists Saipan as having the best, most equitable, weather in the world.  And the beaches?  Well, take a look: 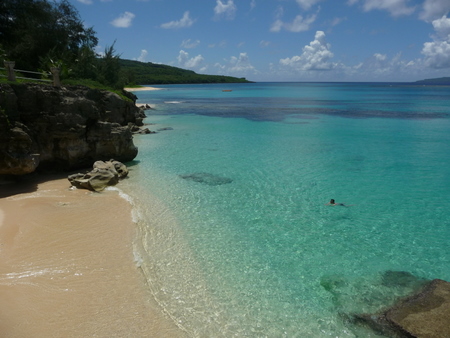