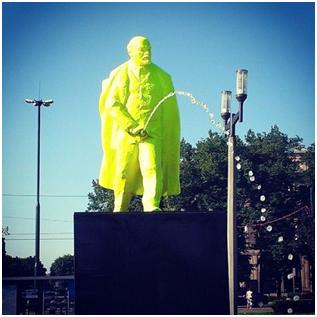 When Poland was able to free itself from Soviet imperialism in 1990, the Poles proceeded to systematically tear down the giant statues of Lenin (never life-size as Lenin was 5-foot-3) infesting every town in the country.

One of the largest stood in the Plac Centralny, the central square of Nowa Huta, an industrial town near the historic city of Krakow in the south. The huge bronze statue was pulled down in a pre-independence protest in 1989. The square was renamed Plac Ronalda Reagana.

Recently, however, the artistic community of Nowa Huta decided the city needed another statue of Lenin, to appropriately honor the father of Soviet Russian tyranny.

The statue’s creators, led by artist Bartosz Szydlowski, painted it in radioactive yellow-green, and entitled it “The Fountain of the Future.” It’s a fountain, you see, depicting Lenin relieving himself.

And it’s adjustable. The leader of the proletariat need not be always firehosing like a superhero. His stream can be slowed down to the level of toiling workers and peasants. 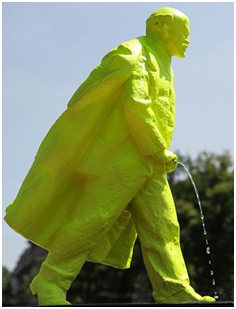 Here’s how the London Telegraph covered the story. Who knew the Poles have such an exhilarating sense of humor?