2 The Point News » Behind The Lines » Free Articles » RECONQUISTA

Santiago de Compostela.  If you want to feel Christianity, feel it in your bones, feel it resonate with history, feel its promise for the future, here is where you come.

Sant Iago – St. James – is the patron saint of Spain, and here is where the faithful believe he is buried.  For over a thousand years, peregriños, pilgrims, have followed the Way of St. James from all corners of Europe, over the Pyrenees, and across northern Spain to its northwestern corner in a region called Galicia.

Their goal is the Cathedral of Santiago de Compostela, which houses the tomb of Christ’s Disciple.  As it has been for centuries, so it is now.  Every day sees swarms of peregriños arrive, having completed their pilgrimage, flooding streets of the ancient city, filling up the cathedral to worship and pray.

Close to 200,000 Christians of all ages will walk to Santiago de Compostela this year, and more are expected next year.  They come to pay homage to the saint known as Santiago Matamoros – St. James the Moor-Killer – whose images of killing Moslems are here for all to see.  St. James is the savior of Spain from Islam.  He is the patron saint of the Reconquista.

The Biblical St. James was the son of Zebedee, a fisherman on the Sea of Galilee, and his wife Salome, sister of the Virgin Mary (cf. John 19:25 with Mark 15:40).  He and his brother John were asked by their first cousin Jesus to be one of the Twelve Disciples.

In the years between Christ’s crucifixion (ca. 29 AD) and James’ execution by Herod Agrippa in Jerusalem (44 AD, Acts 12:1-2), James according to medieval tradition preached the Gospel in the Roman province of far western Hispania.

A thousand years before, sea-faring Phoenicians founded trading colonies along the Mediterranean coast of a land they called i-shaphan-im, the land of hyraxes (a furry critter that looks like a rabbit with tiny ears).  Centuries later, Roman colonists Latinized this to Hispania – España to the Spanish, Spain to us.

The civilization that Rome, and later the Roman Catholic Church, deeply established in Hispania endured until the 5th century AD, when it was conquered by two waves of Germanic tribes.  The first was the Vandals, who called their conquered territory Vandalusia.  Next to come were the Visigoths.

Becoming Christians, the Visigoths established a kingdom with its capital at the old Roman city of Toletum (Toledo) that lasted for almost 300 years.

In 711, an invading force of Berbers from North Africa, who had just adopted a religion called Islam, landed at a huge rock promontory called Mons Calpe at the southern tip of Hispania.  The invaders’ leader was Tariq ibn Ziyad, so they renamed the monolith Jabal Tariq, the Rock of Tariq – subsequently shortened to Gibraltar.

Waves of Moslem invaders followed, sweeping the Visigoths away and conquering all Hispania, which they named Al-Andalus, their pronunciation of Vandalusia.  (Southern Spain is called Andalusia to this day.)

A Visigothic nobleman named Pelagius fled to a remote tangle of mountains in northwestern Hispania (called today Picos de Europa, Peaks of Europe) determined to resist these heathen Moros (Moors, after the Latin maures – itself after the Greek mauros  – for “dark skin”).

In 718, Tariq sent a Moslem army under a commander named Al Qama to capture Pelagius.  At a place called Cavadonga, Pelagius and his guerrilla forces wiped out the Moslem army and killed Al Qama.  At a conference of tribal leaders in the region, Pelagius was elected to be their king, establishing the Kingdom of Asturias (after the most prominent tribe, the Astures).

For the next 19 years until his death in 737, Pelagius expelled the Moslem conquerors from an ever-widening area and expanded the borders of the first Christian kingdom in the wake of the Islamic Conquest of Spain.  So began one of the great heroic epics in the history of Christian Civilization:  the Reconquista, the recapture of Christian lands from Islamic invaders.

Pelagius (Spanish Pelayo, Portuguese Palagio) is revered in Spain as the founder of the Reconquista.  His descendant Alfonso II (757-842) assumed the throne in 791, expelled the Moors from the neighboring region of Galicia and in 814 proclaimed a miracle – that the bones of Santiago, St. James himself, had been discovered at a place in Galicia called Campos Stellae, the field of stars.

Alfonso cited the ancient story of St. James’ preaching in Hispania, and declared that after his martyrdom in Jerusalem, his disciples transported his body by sea back to his beloved Hispania where he wanted to be buried.   A church was constructed over the tomb and a pilgrimage site founded, known as Santiago de Compostela.

In 859, Alfonso’s grandson Ordoño I and his Asturians destroyed a huge Moslem army led by the Emir of Cordoba (the capital of Al-Andalus) at Monte Laturce east of Zaragosa, with 12,000 Moslem cavalry dead.

With this victory, other Christian kingdoms emerged and kicked the Moslems out of their territories:  Navarre at Pamplona, Catalonia at Barcelona, and Aragon between the two.  By 910, Asturias had expanded into becoming the Kingdom of Leon.

150 years later, the King of Leon, Alfonso VI (1039-1109), decided it was time to declare a formal Reconquista to liberate all of Al-Andalus for Christianity.

To do so, he utilized the legend of St. James and the aid of a legendary knight, Rodrigo Diaz de Vivar (1040-1099), known to history as El Cid (the Noble One, Cid being an adoption of the Arabic honorific Sayyid).

For the former, Alfonso explained that the miraculous victory of his ancestor Ordoño I at Monte Laturce in 859 was in fact due to the intervention of St. James – Santiago.  He got the history confused, however, saying the great battle was won by Ordoño’s father Romiro I in 844 at a place near Leon called Clavijo.

At Clavijo, according to Alfonso, St. James appeared at Romiro’s side riding a pure white horse and wielding a flashing sword that cut down the Moors in great swathes.  It was, proclaimed Alfonso, this incarnation of Santiago Matamoros – St. James the Moor-Killer -that gave the Christians their victory over the Moslems at Clavijo, and would now lead them to victory over all Moslems in España.

With the spiritual help of Santiago Matamoros and the physical help of El Cid, Alfonso liberated the region of Castile and conquered the Moorish city of Toledo on May 25, 1085.  Alfonso became a hero to all Christendom and was personally lauded by the Pope.  The “miracle at Clavijo” had been reaffirmed, as had the “heavenly care for Spain” by her patron saint.

But the miracle was soon over.  The 12th century would see one Christian defeat and one Moslem advance after another until the Moslems amassed such a gigantic army under Caliph al-Nasir that it seemed Christian Spain was doomed.

Alfonso VIII of Castile prayed to St. James for deliverance, and persuaded his rivals Sancho VII of Navarre and Peter II of Aragon to join him in a Christian alliance of desperation.  In the early morning hours of July 16, 1212, Alfonso led his 30,000 Christian knights through a hidden mountain gorge for a surprise attack on the Caliph’s 200,000 warriors encamped on the Plains of Tolosa (Las Navas de Tolosa).

The knights swore they saw St. James riding his white charger and swinging his fearsome sword beside them as they fought.  At the battle’s end, 2,000 knights were slain, while over 100,000 of the Moslem enemy lay dead.  The Caliph fled to Africa where he soon died.  The back of Moslem power in Spain was broken.

Within a few decades, one Moslem stronghold after another fell to the Kings of Castile, so that by the end of the 13th century, all that was left of Moslem Al-Andalus was the Sultanate of Grenada in the far south.

Castile expanded to control most all of central and southern Hispania, while Aragon had done the same in the north.  So when Ferdinand, King of Castile (1452-1516) married Isabella, Queen of Aragon (1451-1504) in 1469, they decided to rid Hispania of the last Moslem vestige.

Their siege of Grenada began in the spring of 1491.  On January 2, 1492, they entered the captured city and reconsecrated the principal mosque as a Catholic church.  Seven months later, they set Christopher Columbus across the unknown ocean blue.

At last, after 781 years, all of Hispania was liberated from the Moslem invasion and united as a Christian nation.  Ferdinand and Isabella gave thanks to Spain’s deliverer and patron, St. James the Moor-Killer.

Now let’s take a look at him.  Here is the great Cathedral of Santiago de Compostela: 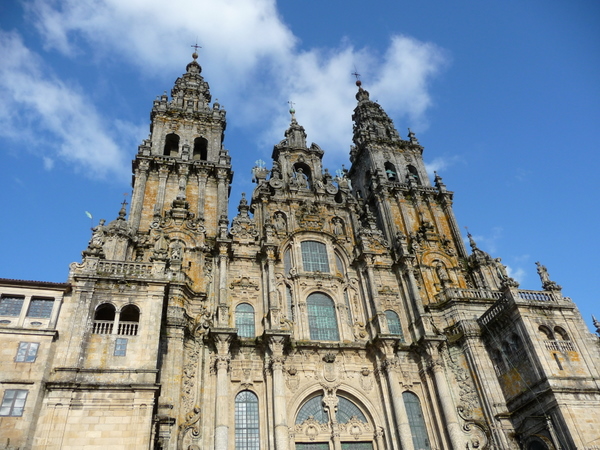 This is the sumptuously Romanesque main altar, on top of which is an enormous gilded platform called a baldachin.  Look closely way up there and you can see the statue of a white horse and rider.  That’s Santiago Matamoros. 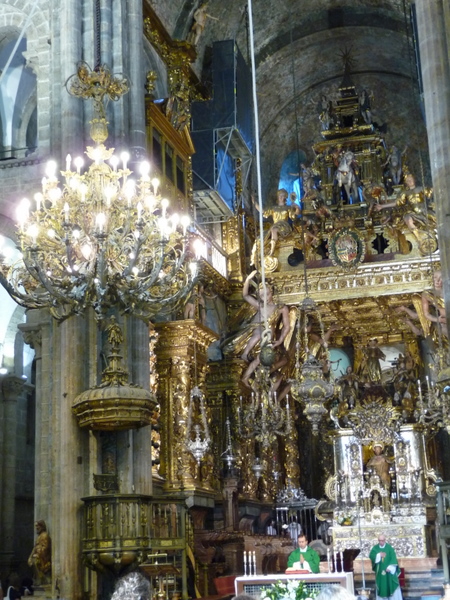 The best zoom I could get on the statue was this.  Note Santiago is swinging his sword – and note especially the headless Moor soldier he has just decapitated. 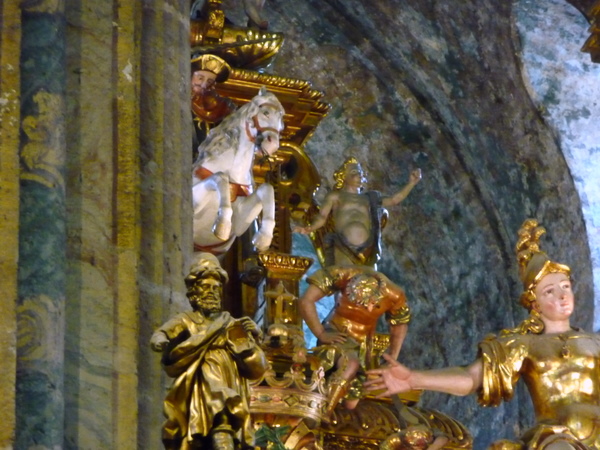 There is a massive organ with the pipes placed high on the side of the nave.  Way up on top of this structure is another sculpture grouping of Santiago Matamoros killing Moors: 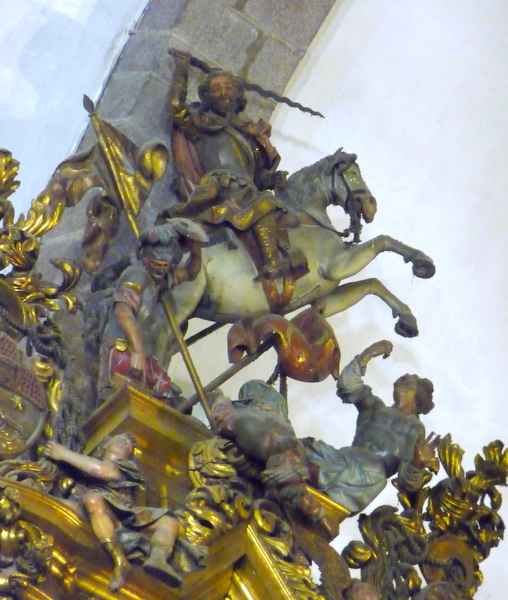 Along the aisles of the nave are a series of chapels, one of which is dedicated to Santiago Matamoros.  Here is the Moor-Killer in all his gruesome glory: 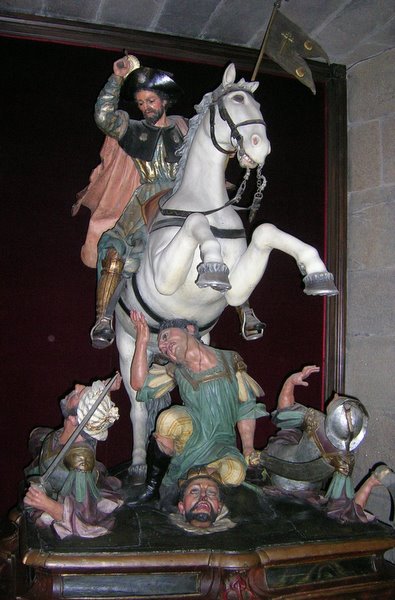 Today, Western Civilization – Christendom – is under a Moslem imperialist assault.  It is a Jihad conducted in part through bloody terrorist slaughter, which America experienced on September 11 eight years ago, and which our Marines and soldiers must fight against in Afghanistan and Iraq.

Yet for the most part, their Jihad is conducted culturally.  The goal of the Moslems’ Jihad is our submission to them – for that is what “Islam” means in Arabic, submission.  Their goal is the destruction of our cultural identity, our civilization, and its founding religious principles.

Thankfully, a Cultural Reconquista does not involve gory slaughter.  It requires the absolutely resolute determination to stand up for freedom being shown now in the Town Halls and Tea Parties.

The American people are awakening to the threat to their freedom posed by the very individuals they elected less than a year ago.  The question of the moment is:  how to grow that awakening into a full-fledged Cultural Reconquista?

It took the Spaniards centuries.  It need take us a few years, or less.  It is inspiring to be here in Santiago de Compostela, to see with your eyes how Christianity is still alive for so many.  Our civilization still has a spark, it has fight in it yet.

I sense an American Reconquista coming.  The day is not far away when our land will be liberated from the Left as Spain was liberated from the Moors, and our civilization will leave Islam with nothing but an empty dreams of a vanished Al-Andalus.