[ssba]Did the Russians hack the emails of the Democrat National Committee (DNC) and Hillary Clinton? 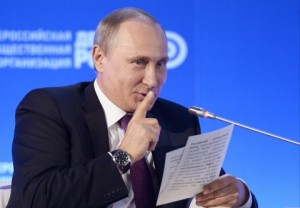 The answer is almost certainly “yes,” but that does not mean that the DNC and other emails were released on behalf of the Kremlin to help Donald Trump. The basis for my skepticism of the charge that the email dumps were ordered by Russian President Vladimir Putin is as follows.

To begin with, I am no fan of Mr. Putin and the Russian government, as I was subjected to Russian-Bulgarian disinformation campaigns; because of my high-profile work on the economic transition in Bulgaria and Russia in the early 1990s; and my expose of Russia payments to members of the Bulgarian Parliament to support the now-abandoned proposed gas pipeline from Russia to Bulgaria 2 years ago.

It is well known that a number of countries — including Russia, China, Israel, France, the United Kingdom and the United States — routinely monitor international phone calls of people of interest, including government leaders, suspected terrorists, potential wrongdoers, international business people and others.

Remember the flap when it was revealed that the United States was listening in on German Chancellor Angela Merkel’s phone calls? The problem was that it was revealed, not that it happened. Emails that are not highly encrypted are relatively easy to hack into. Sophisticated state actors like Russia can do it without leaving “fingerprints.”

This is why FBI Director James Comey said it was “possible that hostile actors gained access to Secretary Clinton’s personal email account.” It would be my bet that not only Russia, but China and other state actors, gained access, because it would be a dereliction of duty for any major state intelligence agency not to have done so, given Mrs. Clinton’s position as secretary of State.

Consider that the Clintons have been covert financial allies of Mr. Putin for a number of years. We know that Russian money, from state-controlled energy companies Rosneft and Gazprom, found its way to at least one Bermuda-based foundation.

This foundation, in turn, supplied tens of millions of dollars to the Sea Change Foundation (a bundler for environmental groups), which then sent millions on to the Sierra Club, the National Resources Defense Council and others.

These environmental organizations are allies of President Obama and the Clintons, and are actively involved in a war against fossil fuels and pipeline projects. There have been detailed and easy-to-find stories about the above in the press for the last couple of years.

Related is the curious fact that Mikhail Lesin, who built the RT TV network for Mr. Putin and then became a senior official of Gazprom, was beaten to death in a Washington hotel room on Nov. 5, 2015. Lesin was almost certain to have known what monies went from Russian sources to the U.S. environmental groups and the Clinton Foundation.

Consider that the Clinton Foundation has been the recipient of Russian-sourced money, some through its Canadian affiliate. The New York Times published a very lengthy story, including a front-page version on April 23, 2015: Cash Flowed to Clinton Foundation Amid Russian Uranium Deal.

It documented how tens of millions of dollars flowed from Russia and Kazakhstan through intermediaries to the Clinton Foundation and other Clinton allies.

The complex scheme eventually “gave the Russians control of one-fifth of all uranium production capacity in the Uranium One.” The fee was “paid by Renaissance Capital, a Russian bank with ties to the Kremlin.”

Questions to ponder: The major Russian intelligence agencies are well skilled in hiding their tracks when doing email hacks — so why would they in this case leave tracks back to a Russian source?

Given the close financial relationship between the Clintons and the Kremlin, why would Mr. Putin want to switch his support to Mr. Trump?

If the Russians do have copies of Hillary’s 30,000 missing emails, wouldn’t they be more useful as potential blackmail than to reveal them during the campaign?

Disinformation and deception are used by state actors and others, as Israeli analyst Dima Adamsky has written, “to manipulate the adversary’s picture of reality, misinform it, and eventually interfere with the decision-making process of individuals, organizations, governments and societies.”

Having been a target of disinformation, I can testify to how disconcerting it is to be the subject, along with colleagues, to false newspaper stories and TV “documentaries,” strange phone calls, computer hacks and other forms of harassment.

Mr. Putin may have a real favorite in the U.S. presidential race, but, remember, when trying to answer the question of his preference, it is relatively easy for skilled operatives to make emails appear to come from sources other than the real source, to alter emails, and to make hacks appear to have come from others.

Political campaigns have always been subject to disinformation, e.g., false news stories and rumors. The digital age just makes disinformation easier, and, hence, we all need to be less naive about alleged “facts.”