ONE MUELLER INVESTIGATION COINCIDENCE TOO MANY 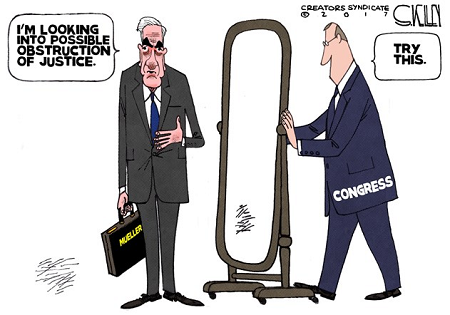 Stacking the deck with anti-Trump staffers is proving to be a really bad idea.

Special prosecutors, investigators, and counsels are usually a bad idea. They are admissions that constitutionally-mandated institutions don’t work — and can be rescued only by supposed superhuman moralists, who are without the innate biases inherent in human nature.

The record from Lawrence Walsh to Ken Starr to Patrick Fitzgerald suggests otherwise.

Originally narrow mandates inevitably expand — on the cynical theory that everyone has something embarrassing to hide. Promised “short” timelines and limited budgets are quickly forgotten. Prosecutors search for ever new crimes to justify the expense and public expectations of the special-counsel appointment.

Soon the investigators need to be investigated for their own conflicts of interest, as if we need special-special or really, really special prosecutors.

Special investigations often quickly turn Soviet, in the sense of “Show me the man and I’ll find you the crime.”

Special Counsel Robert Mueller has led what seems to be an exemplary life of public service. No doubt he believes that as a disinterested investigator he can get to the bottom of the once contentious charge of “Russian collusion” in the 2016 election.

Something has gone terribly wrong with the Mueller investigation. The investigation is venturing well beyond the original mandate of rooting out evidence of Russian collusion.

Indeed, the word “collusion” is now rarely invoked at all. It has given way to its successor, “obstruction.” The latter likely will soon beget yet another catchphrase to justify the next iteration of the investigations.

There seems far less special investigatory concern with the far more likely Russian collusion in the matters of the origins and dissemination of the Fusion GPS/Steele dossier, and its possible role in the Obama-administration gambit of improper or illegal surveiling, unmasking, and leaking of the names of American citizens.

Leaks from the Mueller investigation so far abound. They have seemed calibrated to create a public consensus that particular individuals are currently under investigation, likely to be indicted — or indeed likely guilty.

These public worries are not groundless. They are deeply rooted in the nature and liberal composition of the Mueller investigative team — whose left-leaning appointments just months ago had understandably made the liberal media giddy with anticipation from the outset.

Vox, on August 22, wrote: “Meet the all-star legal team who may take down Trump.”

Special Counsel Mueller was himself appointed in rather strange circumstances.

Former FBI director James Comey (now reduced to ankle-biting the president on Twitter with Wikipedia-like quotes) stated under oath that he had deliberately leaked his own confidential notes about conversations with President Trump, hoping to prompt appointment of a special investigator to investigate a president — whom he said, also under oath, that he was not investigating.

Comey’s ploy worked all too well. Department of Justice officials, now in the Trump Justice Department but who once served in Barack Obama’s administration, selected Comey’s close friend and long associate Robert Mueller as investigator.

From that germination, an innate conflict of interest was born — given that Mueller’s appointment assumed that Comey himself would not come under his own investigation, a supposition that may be increasingly untenable.

Okay — one such conflict of interest swallow does not make a discredited spring.

But then there was the weird position of Comey subordinate and deputy director of the FBI Andrew McCabe. He ran the Washington, D.C., office that was involved in the Clinton email investigations.

For some strange reason, McCabe did not recuse himself from the email investigation until one week before the presidential election, even though just months earlier his wife, Jill McCabe, had announced her Democratic campaign for a state senate seat in Virginia — and had received a huge donation of more than $675,000 from the political organizations of Governor Terry McAuliffe, a longtime Clinton supporter and intimate.

Like it or not, the behavior of the FBI during the Clinton email investigations also extends to the Russian-collusion probe, especially as it pertains to the Clinton-funded Fusion GPS/Steele dossier.

Okay — Washington is an incestuous place, and such conflicts of interest may be unavoidable. Perhaps McCabe himself was not really so directly involved in the FBI investigations of Clinton, and perhaps he had not even talked about the current Mueller investigations.

But then it was announced that at least six of Mueller’s staff of 15 lawyers, who previously had donated (in some cases quite generously) to Hillary Clinton’s campaigns, were now investigating her arch foe Donald Trump.

Okay — no doubt, such apparent conflicts of interests are not what they seem (given the overwhelming preponderance of liberal lawyers in general and in particular in Washington). After all, no one should be disqualified from government service for his or her political beliefs.

But then we came to the inexplicable case of Peter Strzok, an FBI investigator assigned to the Mueller investigation of Russian collusion. Strzok and Lisa Page, a consulting FBI lawyer (part of Mueller’s once-ballyhooed “dream team”), were for some reason relieved from the investigation of Trump in late summer 2017.

Mueller’s office refused to explain the departure of either, other than to let the media assume that the departures were both unrelated and due to normal revolving or transient appointments.

Okay — even dream-teamers and all-stars occasionally move on, and the less said, the better.

But then we learn that the two, while part of Mueller’s investigation of Trump, were having an extramarital affair, and exchanging some 10,000 texts, of which at least some were adamantly anti-Trump and pro-Clinton.

One wonders, Why did that information, now confirmed, come out through leaks rather than through official Mueller communiqués?

In other words, if there is nothing now deemed improper about the two Trump investigators’ amorous political expressions or in the anti-Trump nature of their exchanges, why was there apparently such a reluctance in August and September to avoid full disclosure concerning their abrupt departures?

Okay — perhaps indiscreet electronic communications and affairs in the workplace are no big deal in Washington.

But then Strzok apparently was also responsible for changing the wording of the official FBI report on the Clinton email affair.

He crossed out the original finding of “grossly negligent,” which is legalese that under the statute constitutes a crime, and replaced it with “extremely careless,” which does not warrant prosecution.

Okay — perhaps we can shrug and suggest that Strzok surely did not have the final say in such verbal gymnastics. Or perhaps his anti-Trump, pro-Clinton sentiments were not germane to his mere copy editing or his reliance on a thesaurus.

But then we learned that Andrew Weissmann, who is another veteran prosecutor assigned to Mueller’s legal team, praised Sally Yates, an Obama-administration holdover at the Trump Department of Justice, for breaking her oath of office and refusing to carry out President Trump’s immigration order (Yates was summarily fired).

“I am so proud,” he emailed Yates, on the day she publicly defied the president. “And in awe. Thank you so much. All my deepest respects.”

Okay — it certainly does not look good that a disinterested government attorney investigating the president was so indiscreet as to write his admiration to a fellow Obama holdover who was fighting with Trump.

To give the anti-Trump attorneys the benefit of the doubt, perhaps Weissmann was merely reacting to Yates’s panache rather than to her shared political views?

But then we learned that another attorney on the Mueller staff, Jeannie Rhee, was at one time the personal attorney of Ben Rhodes, the Obama deputy national-security adviser who is often mentioned as instrumental in making last-minute Obama-administrative-state appointments to thwart the incoming Trump administration.

Rhee also provided legal counsel to the Clinton Foundation and was a generous donor to Hillary Clinton’s presidential campaign.

Rhee seemingly could not be a disinterested investigator of Trump, given that she has had financial interests with those, past and present, who are fiercely opposed to the current likely target of her investigations.

Okay —perhaps in Washington’s upside-down world, lawyers are mere hired guns who have no real political loyalties and they investigate, without bias, those whose politics they detest. Why should they feel a need to be shy about their political agendas?

But then, most recently, it was disclosed that a senior Justice Department official, Bruce G. Ohr, connected with various ongoing investigations under the aegis of the Justice Department, was partially reassigned for his contact with the opposition-research firm responsible for the Clinton-funded, anti-Trump “dossier” — which in theory could be one catalyst for the original FBI investigation of “collusion” and thus additionally might be the reason cited to request FISA orders to surveil Trump associates during the 2016 campaign.

And note that it was also never disclosed that Ohr’s wife, Nellie Ohr, whose expertise was Russian politics and history, actually worked for Fusion GPS during the 2016 campaign, when the opposition research firm’s discredited anti-Trump dossier alleging Russian collusion was leaked shortly before Election Day 2016.

Okay — perhaps Ohr, as part of his job, was merely learning about aspects of the dossier from one of its owners, for future reference.

But then again, we learned of the strange career odyssey of yet another person on Mueller’s legal team, Aaron Zebley (supposedly known in the past as Mueller’s “right-hand hand”).

Yet Zebley, as late as 2015, represented one Justin Cooper. The latter was the IT staffer who set up Hillary Clinton’s likely illegal and unsecure server at her home, and who purportedly smashed Clinton’s various BlackBerries with a hammer in fear they would be subpoenaed.

Zebley had come into contact once earlier with congressional investigators, when he was legal counsel for Cooper — and yet Zebley now is on Mueller’s team investigating Donald Trump.

By now there are simply too many coincidental conflicts of interest and too much improper investigatory behavior to continue to give the Mueller investigation the benefit of doubt. Each is a light straw; together, they now have broken the back of the probe’s reputation.

In inexplicable fashion, Mueller seems to have made almost no effort to select attorneys from outside Washington, from diverse private law firms across the country, who were without personal involvement with the Clinton machine, and who were politically astute or disinterested enough to keep their politics to themselves.

What then is going on here? No one knows. We should assume that there will be almost daily new disclosures of the Mueller investigation’s conflicts of interest that were heretofore deliberately suppressed.

Yet Donald Trump at this point would be unhinged if he were to fire Special Counsel Mueller — given that the investigators seem intent on digging their own graves through conflicts of interest, partisan politicking, leaking, improper amorous liaisons, indiscreet communications, and stonewalling the release of congressionally requested information.

Indeed, the only remaining trajectory by which Mueller and his investigators can escape with their reputations intact is to dismiss those staff attorneys who have exhibited clear anti-Trump political sympathies, reboot the investigation, and then focus on what now seems the most likely criminal conduct: Russian and Clinton-campaign collusion in the creation of the anti-Trump Fusion GPS dossier and later possible U.S. government participation in the dissemination of it.

If such a fraudulent document was used to gain court approval to surveil Trump associates, and under such cover to unmask and leak names of private U.S. citizens — at first to warp a U.S. election, and then later to thwart the work of an incoming elected administration — then Mueller will be tasked with getting to the bottom of one of the greatest political scandals in recent U.S. history.

Indeed, his legacy may not be that he welcomed known pro-Clinton, anti-Trump attorneys to investigate the Trump 2016 campaign where there was little likelihood of criminality, but that he ignored the most egregious case of government wrongdoing in the last half-century.