2 The Point News » Behind The Lines » Free Articles » OF ALL THE WORLD’S COUNTRIES, WHICH IS THE LEAST RACIST?

OF ALL THE WORLD’S COUNTRIES, WHICH IS THE LEAST RACIST?

How many countries – sovereign, independent nations – are there in the world?  206, according to the List of Sovereign States.  Of these 206, I have traveled to and had personal expriences in 193.

As the Democrat Media and Democrat Moonbat Left play the Race Card with mounting hysteria, it behooves us to take a look at racism around the world and see where America ranks.  It is jejune to compare racial reality in America solely with some Platonic Ideal of pure racial harmony, which has never existed in any society in the history of mankind.

Further, such a look must be based either on personal experience or solidly persuasive evidence, rather than hearsay or leftwing fairy tales.  This is why I mention that number of 193 out of 206.  I have not been everywhere, and many people know particular places in the world far better than me – but there are very few folks who know the world as a whole better than I do.

This at least gives me good grounds for being able to answer questions such as, what are the least racist countries in the world, what are the most racist, and where does America come out among them?  I cordially invite anyone who disagrees with these answers to provide counterexamples based on their knowledge and experience.

We have to start with defining just what “racism” is – for the left has divested the term of any meaning.  It has no more current meaning than gibberish, like “schlacism” or “bltspilzh.” It only signifies dislike by the speaker, like yelling “boo!” or a crude expletive.

It’s supposed to mean dislike of and prejudice towards people based on purely somatic difference.  Such differences in bodily appearance give rise to distinctions of “race” – e.g., Caucasoid, Negroid, and Mongoloid.  Martin Luther King, Jr. in his famous I have a dream speech used the term correctly when he condemned judging a man merely on the color of his skin instead of the content of his character.

As such, “racism” is a primitive form of collectivism, judging human beings not as individuals but as members of a collective – blacks, whites, workers, bourgeois, 99%, 1%, believers, infidels.  The political Left is incurably collectivist.  The only rights the left agitates for are those they claim belong to groups of people as such – the poor, the workers, homosexuals, minorities, etc. – never individuals as such.

All varieties of collectivism are those of us-vs.-them tribalism.  Tribalism is the most ancient bane of mankind, tribal violence the original form of human savagery.

Rousseau’s claim that primitive peoples were innocent and noble children of nature before the evil exploitative West perverted them has been exploded by anthropologists such as Lawrence Keeley, who documents the fantastic level of violence perpetrated by pre-Columbian Amerindian tribes upon each other in his book War Before Civilization: The Myth of the Peaceful Savage.

So – racist, tribal savagery is ancient and primitive.  What about the world today?

Irruptions of it still occur in tribal Africa, Papua and Indonesian New Guinea, or the Solomon Islands.  It is most blatantly practiced by Moslem terrorists, who are clearly now the world’s most murderously violent racists.

Still, racist tribal savagery is isolated and not globally prevalent.  What about racist tribal bigotry – people of one tribe being treated as an inferior form of humanity by those of another tribe?

The answer is: it’s ubiquitous. A better question is to ask:  where isn’t such tribal bigotry prevalent?

The Japanese during World War II were murderously racist on the level of Biblical savagery.  Today, they are among the most peaceful and polite of peoples.  Yet behind the smiles and gracious manners, Japanese regard all non-Japanese as gaijin – which, to capture the emotional and not just the literal meaning, should be translated as the N-word, not simply “foreigner.”

All foreigners are n**gers in Japanese eyes.  That’s why it is next to impossible for any non-Japanese to become a Japanese citizen.  Korean immigrants (called Zainichi) who have lived in Japan for generations are rarely granted citizenship.  Japan even has an Untouchable caste as in Hindu India called Buraku (village people), descendants of outcast rural communities.

A formal assessment published by the United Nations Mission to Japan in 2006 found racism, racial intolerance and xenophobia to be “deep and profound” in Japan.

The Han Chinese have been xenophobic for thousands of years, with all non-Han regarded as barbarians.  As a result, China today with the world’s largest population of 1.3 billion, is over 90% Han.  Yet there is an ancient racism within the Han themselves based on skin color:  Han with lighter skin traditionally despise those with darker skin, who are regarded as lowlife peasantry.

Thus even though Western whites remain gui lao, foreign devils, who have disgusting body odor and hairy arms and legs, the Han hold them in far higher regard than African blacks.  The ghastly racism experienced by African black students in China is legendary.

Exemplifying Han anti-black racism is the story of Lou Jing from Shanghai.  The daughter of a Chinese mother and a Black American, she has been subjected to virulent racial hatred as a television show contestant.

Interestingly, discrimination by lighter-skinned people towards darker-skinned people is virtually universal.  The phenomenon has been dubbed colorism, resulting in pigmentocracy which is global.

In Italy, as a European example, lighter-skinned northern Italians look upon darker-skinned southern Italians as “Africans.”  The southerners in turn sneeringly refer to the northerners as “Germans.”

Perhaps the most racist society on earth is that of the Hindu caste system in India.  The Brahmins at the top of the caste heap are the lightest-skinned Indians, while the Dalits (Untouchables) the darkest.  Almost all of India’s Bollywood movie stars are light-skinned.

You see colorism and pigmentocracies all over Africa.  Ads for skin whiteners are common.  Here’s a typical one I recently saw in Togo: 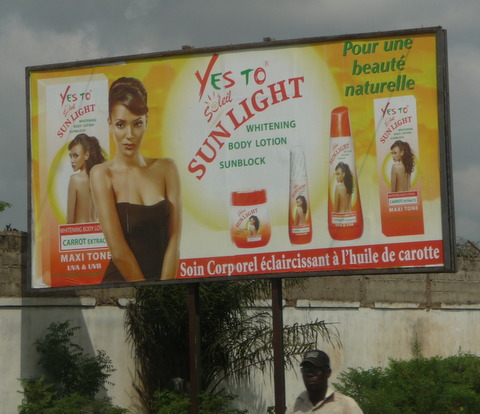 Where does America come out in all of this?  One way to answer is to ask, where else in the world have more peoples of different ethnicities been made more welcome and given more opportunities to flourish than in America?  Looking around the world, I don’t know of any.  If you do, please let me know.

Or:  what other country has striven harder to overcome racial tribal bigotry endemic to all human societies than America?  Again, if you know of one, I’d like to hear of it.

Which makes the endless guilt-mongering of Democrats and leftie race hustlers totally insufferable.  Which brings me to Zero’s Son.

His name is Tyrone Woodfork of Tulsa, Oklahoma.  After the black teenager was arrested on March 15 for breaking into the home of a white couple, Bob (age 90) and Nancy (age 85) Strait, raping Nancy so violently she died the next day, beating Bob so badly he’s struggling for his life in a hospital, then stealing their car and burglarizing their home, the President of the United States held a Rose Garden press conference and said:

“This is a tragedy.  If I had a son, he’d look like Tyrone Woodfork.”

Oh, wait.  He said that about a black kid named Trayvon who was slamming a Hispanic guy’s head into concrete who shot him in self-defense.  Nonetheless, you might think just for the sake of balance and sheer decency, the President would have a word of sympathy for Bob and Nancy Strait.  But no, not a word.

Nor a single word in the national media, just the local Tulsa press.  It took the London Daily Mail in England to make anyone outside Tulsa aware of a monster capable of raping and killing an 85 year-old woman.  The story will break your heart – but it didn’t touch Zero’s, nor that of any member of the US Enemedia.

“Stupefyingly naïve (to believe) that this election ‘heals’ the wound of racism and the legacy of slavery, so that nevermore can Sharpton-type race hustlers claim that America is an incurably racist nation.

This is delusionary.  Accusations of racism are going to increase, not vanish.  The left’s mantra going into this election was that the only possible reason for not voting for NMP was racism.  Yet roughly 47% of voters or about 57 million voted for McCain instead.  That’s 57 million racists!  Racism is still a massive, gigantic problem haunting America’s soul, it is still America’s Original Sin – and every failure of NMP and the Dems running Congress can be blamed on it.

The real racial problem in today’s America is anti-white auto-racism – racial self-hatred of whites by white liberals – which is what empowers black race hustlers to promote anti-white racism among blacks.  This election is going to inflame both.

Does anyone not terminally naïve believe that Al Sharpton or Rev. Jeremiah ‘God Damn America’ Wright are going to start loving and forgiving white folks now?  Or that Teddy Kennedy-type liberals are going to cast aside all feelings of liberal guilt and stop apologizing for their and America’s existence?”

Liberals cannot cast aside their guilt and guilt-mongering.  But we can brush it all aside.  Believing in America’s racial guilt is like believing in voodoo:  if you don’t believe it, it has no power over you.

So – the next time some libtard starts to sound off on “Racist America,” here’s what to do.  Interrupt him to ask, “Excuse me, but can you name a country, based on your personal experience of it, that is less racist than America?”

As he’s trying to get out of his rattled cage, follow up with, “There are over 200 countries in the world.  Dozens and dozens of them, at least, are more racist than America.  Surely you can name a few that are less.”

Even if he does come up with, say, Canada, ask him for others.  With any luck, you might possibly get him to think – an unsettling experience for a liberal – and thus question his assertion.  More likely, of course, is he’ll just get mad and attempt to be intimidating.  That’s your cue to laugh.  And laughter does to libtards what water did to the Wicked Witch of the West.