NO FEAR OF THE EVIL EYE: Aristotle, Einstein, and Mussolini

Ever play the Ultimate Dinner Party parlor game – where you get to imagine inviting people from history to converse over dinner and explain why them? At such a party, one conversation I’d most like to hear would be between Aristotle and Einstein. (And no, Mussolini would not be invited – we discuss him after dinnertime.)

Einstein would first have to bring Aristotle up to speed with what science had learned since the 4th century BC.  In particular, he would blow Aristotle’s mind about inertia.

Once Aristotle grasped Newton’s First Law explaining motion – that something will stay put unless pushed, but once pushed will keep moving until and unless something else stops it – it would alter his entire concept of the structure of the universe.

Aristotle thought that for something to move it had to be continuously pushed, and if the pushing stopped so would its moving.  With inertia, his concept of the Universe would thus have no need of an “Unmoved Mover.”[1]

But once he digested this and Einstein paused to take a breath, Aristotle would ask him – “So, all of us here at dinner are famous – what are you famous for?” When Einstein answered, “The Theory of Relativity,” Aristotle would respond: “What is it that’s relative?”

“Time is relative,” comes the reply. “People, or ‘observers,’ experience time differently if they are moving differently from one another, or are in what I call different ‘inertial reference frames.’ Since we’re all in one big such frame called Earth, time is the same – but for people outside it, in a spaceship, say, it would be different.”[2]

“So time is, as I always maintained, a ‘measurement of motion,’ and if the motion is different for one set of people than another, then time will also be different for them?” Aristotle would inquire.

They both say together with a laugh… “No time!”

After another glass of wine and perhaps a little small talk, Aristotle would want to press further. “Still, nothing is simply relative, just like nothing is simply ‘large.’ A thing can be ‘large’ only in comparison to something else. So there must be something constant, something that always stays the same and isn’t relative, to hold your “Relativity’ theory together.”

“But light isn’t that way. You could be running a thousand, a million, stades a second and if you lit a torch, the light from it would not move the slightest bit faster than if you were standing still.”

Aristotle would be stunned. First to know that light goes that fast (the Greek measurement of distance was the stade, equaling 606ft 10in; at 8.7 stades to the mile, light travels at 1,618,200 stades a second). And secondly, that it goes that fast – never faster, never slower – no matter the speed of its source.

Yet once he had assimilated this, there is no doubt about what he would ask his new friend Albert next: “Then why isn’t your theory called The Theory of Constancy, since all of what is ‘relative’ depends on this constant?”

We can be sure that, after seeing how Aristotle’s mind works by reading his Metaphysics and other books, this would be his central question to Einstein. What is a puzzle is why this question was never asked by Einstein of himself.

Physicists commemorate the year 1905 as the annus mirabilis, the “miraculous year,” when a 26 year-old unknown clerk in a Swiss patent office published four papers in an obscure German-language physics journal that revolutionized science and changed the way we look at the universe. In one of these, “On the Electrodynamics of Moving Bodies,” Einstein introduced his Theory of Special Relativity.

Yet this was an incredible misnomer – for what Einstein did was replace one absolute – time – with another – the speed of light. This misnomer is one of the great social tragedies of modern times.

This allowed every intellectual fraud in the world to transform relativity into relativism. As Time Magazine editor Walter Isaacson[3] put it when Time proclaimed Einstein to be “The Person of the Century” (January 3, 2000 issue):

“Einstein’s theory of relativity not only upended physics, it also jangled the underpinnings of society. For nearly three centuries, the clockwork universe of Galileo and Newton—which was based on absolute laws and certainties—formed the psychological foundation for the Enlightenment, with its belief in causes and effects, order, rationalism, even duty.

Now came a view of the universe in which space and time were all relative. Indirectly, relativity paved the way for a new relativism in morality, arts and politics. There was less faith in absolutes, not only of time and space but also of truth and morality. ‘It formed a knife,’ historian Paul Johnson says of relativity theory, ‘to help cut society adrift from its traditional moorings’.”

This is where is all began.  On the terrace of a Portuguese cocoa plantation called Roça Sundy on an island you never heard of, Príncipe, off the coast of Gabon in West Africa.[4] 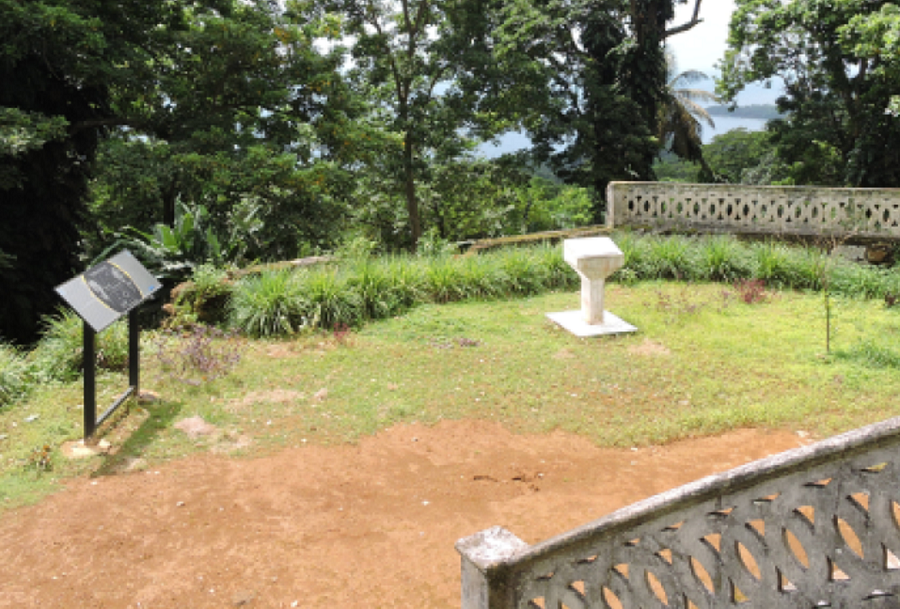 This is where Einstein became EINSTEIN, the most famous scientist of modern times, by far.  Those four papers he wrote in 1905 caused a stir among the physicists of the day, but he remained totally unknown to the outside world.  Further, his Theory of Special Relativity did not incorporate gravity, which he knew was a very serious defect.

It took him ten years to present, in 1915, his field equations of gravitation which became known as his Theory of General Relativity.

Einstein’s Theory of General Relativity precisely predicted that gravitation would bend light twice as much as did Newton.  English astronomer Sir Arthur Eddington knew the way to test this was during an eclipse of the sun – which would show how much the sun’s gravitation would bend the light compared to normal observation.

An eclipse of almost 7 minutes took place on Principe on May 29, 1919.  Eddington was there and got two successful astrographic plates.  On November 6 at the Royal Astronomical Society in London, Eddington announced the results confirmed Einstein.

The next day, November 7, the English-speaking world’s most widely read newspaper, The Times of London, ran the immortal headline on its front page: “Revolution in Science – New Theory of the Universe – Newtonian Ideas Overthrown.”  The rest is history. 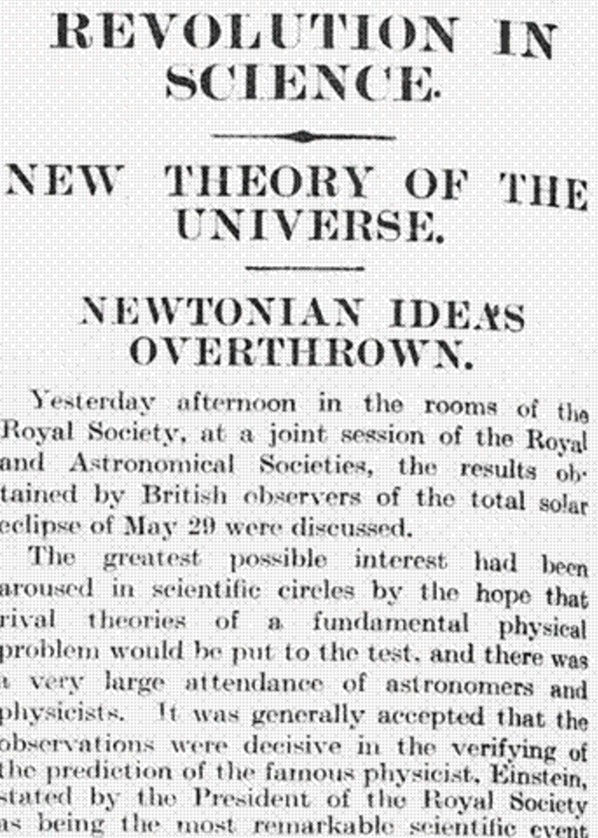 This is memorialized on the Roça Sundy terrace:

Nine days after that London Times headline – November 16, 1919 – there was a general election for Italy’s Chamber of Deputies to govern the country.  One of the contending parties was Fasci Italiani di Combattimento ­– Italian Fascist Combatants – led by Benito Mussolini.

He named his party and followers after the fasces bundle of rods around a battle axe symbolizing the unity of a people under state law and power for Ancient Rome.  Many governments have used it – the US Mercury Dime, minted from 1916 to 1945, depicts it on the reverse side to symbolize “E Pluribus Unum” – “Out of Many, One “ –  along with an olive branch to symbolize peace: 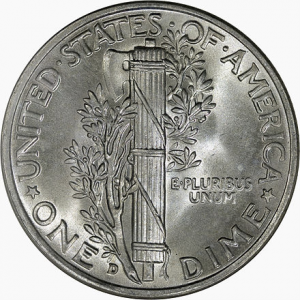 No olive branch for Mussolini, just the fasces of raw state power – so much so his 1919 campaign slogan was
“Vote for Mussolini – the Lenin of Italy.”

“There is only one way in which the murderous death agonies of the old society and the bloody birth throes of the new society can be shortened, simplified and concentrated, and that way is Revolutionary Terror.”[5]

So enamored that he wrote a book on it in 1908, which had a permanent effect of Mussolini: Reflections on Violence. In it, he argued that violence – actual real physically destructive and murderous violence committed by the exploited workers upon the lives and property of the exploiting capitalists – was a moral virtue, as it was the only way to achieve social justice.

Another great admirer of Sorel was Lenin.  When he and his Bolsheviks seized control of the Russian Revolution in October 1917 they immediately put Sorel’s argument into practice.  So much so, Sorel had this praise for Lenin in the April 1920 issue of Soviet Russia, the Official Organ of the Russian Soviet Government Bureau:

And in 1921, Sorel returned the admiration of his disciple: “Mussolini is a man no less extraordinary than Lenin. He, too, is a political genius, of a greater reach than all the statesmen of the day, with the only exception of Lenin.“[6]

Nonetheless, Mussolini, for all his admiration of Sorel, was unsatisfied with his mere assertion that violence was a virtue.  He saw the solution in all the hyperbolized confusion over Einstein’s “revolution in science” that was without a shred of justification converting his science of relativity into moral relativism.

He saw, at the start of the 1920s, every Marxist from artists, journalists and writers to university professors seizing on Marx’s claim that reality is contradictory to say Einstein “proved” there were no longer any absolutes – that just as time and space are relative (never ever pointing out the speed of light is not!), so knowledge and truth is relative, so good and evil is relative.

Mussolini saw his chance to provide the philosophical foundation for his ideology of Fascism.  In 1921, he did it in his book Diuturna (The Lasting), stating:

“Everything I have said and done in these last years is relativism by intuition. If relativism signifies contempt for fixed categories and those who claim to be the bearers of objective immortal truth, then there is nothing more relativistic than Fascist attitudes and activity. From the fact that all ideologies are of equal value, that all ideologies are mere fictions, the modern relativist infers that everybody has the right to create for himself his own ideology and to attempt to enforce it with all the energy of which he is capable.” [7]

What “progressive” preaching “tolerance” and “diversity” could disagree?  Mussolini’s Fascism and Marxist Communism have precisely the same morality: Might makes right.  The end justifies the means.

[1] . Aristotle would also, of course, be astounded that the Earth goes around the Sun, not the other way around, as do the other planetai, “wanderers,” that the galaxías kýklos (“milky circle”) is composed of stars like the Sun in a rotating galaxy of hundreds of billions of stars, that the universe contains one to two trillion galaxies and is over 13 billion years old.  Quite a lot to assimilate!

[2] . See Note 2 in Chapter 5, viz. GPS navigation works because of special relativity. The clocks of orbiting satellites tick at a different speed than those on Earth because of their differing velocities. Yet GPS technology needs to have clocks in perfect synch with those on Earth to allow it to nail down position to a precise degree.

The slight difference between satellite and earth clocks would cause errors of several parts per billion. This would be enough to make them useless for all modern purposes including aerial and submersible navigation and military operations. Einstein’s equations correct the difference, so that airplanes land on the runway and not 40 feet to the side.

[4]  Originally uninhabited when discovered by Portuguese explorers in 1471, the islands of São Tomé and Príncipe were a Portuguese colony until achieving peaceful independence in 1975.

[7]  The Italian original is translated by Prof. Henry Babcock Veatch in Rational Man : A Modern Interpretation of Aristotelian Ethics