NEW YORK CITY HAD IT COMING 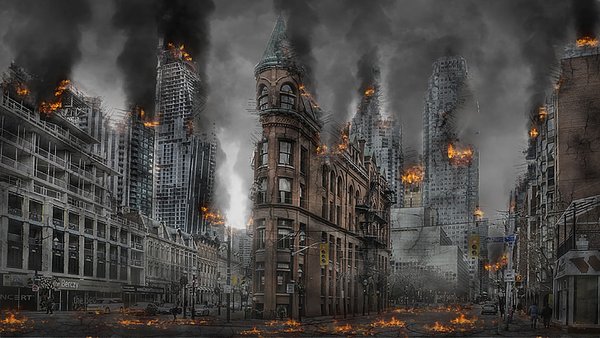 What do you expect when New Yorkers elect a Communist for their mayor – twice?

I used to love New York City. There was so much to do and see, but if one were from the heartland like me, one could be perfectly content to just walk the streets and look at architecture and people.

One might seek out venues one had seen in the movies, such as in Woody Allen’s Manhattan; perhaps Elaine’s. And when one got weary from walking, one could sit down at one of two major opera houses. And after a performance one might grab a beer at P.J. Clark’s across the street from the Met and muse about what a wonderful city one was visiting, where the Bronx is up and the Battery’s down.

It really was a helluva town.  Tragically, I used to love New York City, but there’s not much left to love.

In the wake of the riots and vandalism things aren’t so wonderful in the Big Apple anymore. Many are saying the city is dead and isn’t coming back.

It’s a longish article with three charts, but it’s worth your time, as it has insights that might be transferable to other cities:

“NYC has never been locked down for five months. Not in any pandemic, war, financial crisis, never. In the middle of the polio epidemic, when little kids (including my mother) were going paralyzed or dying (my mother ended up with a bad leg), NYC didn’t go through this.”

At least a half-million of productive New Yorkers have left the City in a “mass exodus,” and Altucher thinks they won’t be coming back. Even so, many are taking their jobs with them.

They don’t need to commute to work, as they can telecommunicate to work. That’s because of the huge increases in bandwidth, Altucher tells us. Why ride the subway to work when one can fire up one’s computer and Zoom to work?

Altucher himself held out on moving from his beloved NYC until June, when the riots began. He has kids, and upon seeing videos of rioters trying to break into his building after curfew, Altucher had had enough and decamped for Florida.

Altucher’s article got a lot of buzz. The New York Post reprinted it in its entirety on then ran a counterpoint article by a Manhattan lawyer. At the Blaze, Glenn Beck read Altucher’s entire article on the air; it takes more than 14 minutes (it’s also here). On Fox Business, Maria and Dagen interviewed Altucher, and the first thing he went into was lost tax revenue, deficits, and mass bankruptcies.

But here’s the thing, there was already talk of bankruptcy for NYC back in 2019. So although the lockdown was the fatal blow, NYC already had huge problems.

There’s one key word that never appears in Altucher’s article: “Blasio.” (To soften that observation for Italian-Americans, Mayor Bill de Blasio, the chief villain in NYC’s demise, chose his name; his real name is Warren Wilhelm, and he’s from Norwalk, Connecticut.)

So, is Altucher guilty of having voted for de Blasio? If he voted to re-elect de Blasio, then Mr. Altucher is responsible, at least in part, for the ruination of his city. Even before his re-election, virtually everybody it seems in NYC “disapproved,” to use a kind word, of the mayor. Yet, he got a second term.

Are we talking massive voter fraud here, or is the NYC electorate a bunch of dummies?

NYC’s brilliant oh-so-sophisticated residents reflexively vote Democrat. Only when life in the Big City becomes too “unpleasant” will New Yorkers consider voting GOP. They did this in the 1990s when they elected a law-and-order Republican for mayor – Rudy Giuliani – to clean up the messes created by their previous voting mistakes.

Rudy leads us to the main reason for NYC’s possible demise: the situation in the streets.

NYC’s streets are now too dangerous and too disturbing for normal folks to tolerate. If they’re not being attacked, beset, robbed, or murdered, they’re being disgusted. The streets are the problem that must be fixed before we can consider a resurrection for NYC.

The psychotics, thugs, panhandlers, loiterers, tent campers, muggers, and everyone else making life in the city a trial need to be removed and never tolerated again. New York City was America’s premier metropolis. It should be reserved for “movers and shakers,” ne’er-do-wells should reside elsewhere.

Last year when hoodlums started dousing NYC cops with buckets of water and little was done about it, NYC’s fate was sealed. Giuliani would never have allowed the streets of NYC to descend into the chaos that de Blasio has let happen; Rudy would have stopped it cold.

If New York is to be revived, then a new policy of zero tolerance for bad behavior must be instituted. Panhandling, public urination and defecation, nudity, sex in the streets, loitering, malingering, tent encampments, etc. should no longer be tolerated.

They need to start voting for decent candidates. Perhaps their whole municipal system of government needs to be scrapped. New York City needs to be reorganized in bankruptcy, receivership, or by some federal overlord. But there should be no federal funds for a bailout.

New Yorkers need to accept responsibility for the destruction of their city. That might start by electing Michelle Caruso-Cabrera to Congress for the 14th district. Yes, she lost to Occasional-Cortex in the primary, but she still seems to be on the ballot in the general under the Serve America Movement Party. Unlike AOC, Michelle is an adult.

If Occasional-Cortex and the other commie idiots New Yorkers have sent to Congress are re-elected, then maybe we could sell Manhattan back to the “Indians.”

Jon Hall regrets to say he not the famous handsome actor Jon Hall (1915-1979) who played Tarzan in the movies, but is happy to report he’s very much alive as a computer programmer in Kansas City.