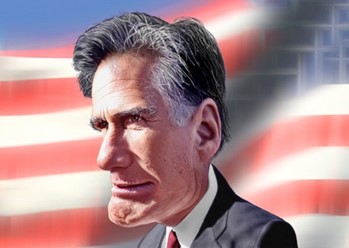 Mitt Romney prides himself on being a thorn in President Trump’s side, but he is just a gnat buzzing about the Leftmedia that now revere him.  He’s become a joke but has yet to realize it.

Romney wins the prize among the pathetic group of RINOS who think they can vanquish Trump by treating him and his supporters like pond scum.  The problem with the Left and the RINOS is that they assume, with no hint of irony, that they are smart and the rest of us are not.

Actually, it is they who are blinkered to the point of blindness. They take for granted their revealed conviction that Trump-supporters and the American citizens of our middle and working classes are unworthy of respect.

Just as they regard all those illegal aliens they’ve invited to cross our border without regard for the horrific indignities they must endure on their journey north.

The Biden/Harris administration knows full well that those women and children are subjected to all manner of abuse and torture, that each migrant must pay the cartels and can enter the country only with their paid permission and wearing a bracelet to confirm that permission.

Wasn’t Romney the Republican presidential candidate in 2012? Wasn’t he elected a Republican Senator in 2016?  But Romney now seems to love Democrat Biden and endorses his Democrat destructive policies all around.  He loves to show up on the Sunday shows and condemn President Trump.

Clearly, the man has no scruples, no core values.

Had Romney won the presidency in 2012, he may have been marginally better than Obama, but, like Biden, he would never have put America first.  He’s a born globalist, which explains his affinity for Biden and the Leftmedia.

Romney is fawned over by the hapless Chuck Todd and venal Jake Tapper, two of the most radical non-journalists who have doled out carefully constructed fake news on a daily basis for years.  No wonder their ratings have crashed.  Romney is happy to be one of their stooges.

Todd and Tapper (and Wallace, Stephanopoulos, Williams, Maddow, O’Donnell, etc.) are long-term de facto activists for the Democrat party and do their bidding without regard for the truth.  They now embrace the vacuous Mitt Romney – a traitor to his declared party and to the values of the Latter-Day Saints he has long espoused: the primacy of family and country.

What a nasty piece of envious work.

Romney voted to expel President Trump twice — over the phone call with the new President of Ukraine and then over the FBI-instigated demonstration at the Capitol on January 6.

This is why he was booed at the Utah GOP convention in May.  He is the Liz Cheney of Utah.  He has nothing to say about the damage Biden has done so far and is doing to our country in order to please Putin and the CCP.

He dismisses the notion of election fraud, made a point on CNN Sunday (6/27) to insult the great and magnanimous patriot Mike Lindell and the best mayor N.Y. ever had, Rudy Giuliani, a man whose shoes Romney is not fit to shine.

Romney is a little man, not in stature but in spirit.  He is a toady of the Left.  How the voters of Utah fell for his conservative act is a mystery.  You can bet they won’t make that mistake again in 2022!

He is as transparent as Jen Psaki, superciliously venal.  As for the people and businesses the Biden administration is destroying?  Pierre Delecto, his once-upon-a-time Twitter handle, does not care; he’s got his massive wealth and only means to protect and grow it.

On Sunday, he said, “There is a battle going on in the world right now between the nations like China and Russia and nations that believe in democracy.  If the autocratic nations can point to United States which is the birthplace of this modern democracy and can say, look, they can’t run an election there that is not fraudulent, how can you possibly run it in your country?”

He seems not to realize that (1) we are a republic, and our states have rights, and (2) by supporting the Biden agenda, he is supporting China and Russia.  Biden is a bought and paid for tool, a puppet of both.

Like the rest of the Left and the anti-Trump RINOs, Romney made a decision to dismiss any and all evidence of election fraud early on — fraudulent ballots, ghost voters (dead or nonexistent), machine tampering, not to mention the Soros-funded Transition Integrity Project , Perkins-Coie’s successful plot to alter election law in all the swing states, and Molly Ball’s gleeful confessional in Time Magazine.

He clearly chose as well not to read the Navarro Report or the volumes of evidence and/or sworn affidavits Giuliani has made public; thousands of people have sworn under penalty of perjury that they witnessed election fraud in numerous states.

Romney blissfully ignores any information that does not comport with his certainty that the election was fair, even though Biden could not muster two dozen people anywhere throughout the campaign and Trump drew multi-thousands.

There was an article about Ghislaine Maxwell where she is quoted as saying about the young girls she provided (pimped) to Jeffrey Epstein: “These girls are nothing.”

That is exactly how men and women like Mitt Romney, Chuck Todd, Jake Tapper, Chuck Schumer, Nancy Pelosi, et al. consider those of us without massive wealth and power: irrelevant, unworthy of notice, let alone concern.

They are authoritarians at heart, which explains their absurd and overly aggressive campaign to vaccinate every single person without regard for the too-often catastrophic consequences.  Romney is of course part of the vax-everyone crowd.

Unsurprisingly, he’s on the global warming hoax bandwagon, too; anything goes when it comes to controlling the masses.  As with COVID, fear-mongering is the name of their game.

Romney wanted to be President Trump’s secretary of state, but he was not selected because he has virtually no knowledge of foreign policy.  Neither he nor any of his five sons has ever served in the military.  He was not qualified for that job.

Thus he has had it in for Donald Trump ever since he failed to get the Cabinet post he wanted, and he has exposed his dark and malicious soul.

He should beware: “It is never wise to seek or wish for another’s misfortune.  If malice or envy were tangible and had a shape, it would be the shape of a boomerang.” —Charley Reese