2 The Point News » Behind The Lines » Free Articles » LIMBIC PICTURES

What launched the “Reagan Doctrine” – the strategy that dismantled the Soviet Empire – was a series of pictures. They were ones I had taken of individual Afghans, Nicaraguans, Angolans, and others who were risking their lives to rid their countries of Soviet tyranny. At a meeting in the White House in late November 1983, for the first time those attending actually saw what these people looked like – rather than reading classified reports about them, ink on paper.

There were plenty of pictures of folks with weapons. But the picture that got to them most was of Amin, a young Afghan boy whose hands had been blown off by a Soviet butterfly bomb disguised to look like a toy: 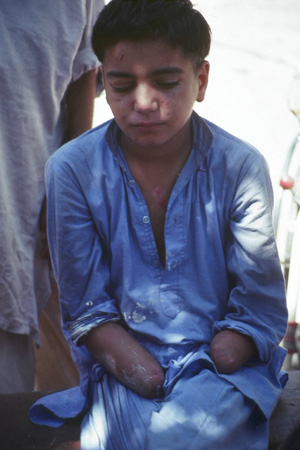 When I appealed to them to develop an offensive strategy of comprehensive support for the emerging world-wide phenomenon of resistance to Soviet imperialism – rather than a piecemeal effort to help the Afghans here, Solidarity there, etc. – there were a lot of nodding heads in the audience, after they had seen this picture.

There is famous story among Reaganauts about CBS News reporter Leslie Stahl and then-White House press secretary Larry Speakes. He had given her a video of Reagan meeting with a group of children and she used it for a story in which she rhetorically savaged the president in her commentary.

The next day, he congratulated her on her “terrific” story. Confused, Leslie asked him: “Didn’t you hear what I said?” Larry smiled and answered: “Leslie, people watch television, they don’t listen to television like radio. The visuals are what counts – nobody paid any attention to your words.”

This week, the Swimming Senator, Teddy Kennedy fulminated yet again about the Abu Ghraib prisoner-abuse scandal. Mention “Abu Ghraib,” and the pictures pop into your head, right? Like Pvt. Lynndie England smiling broadly while humiliating a captured terrorist. Without the pictures, there would have been no scandal.

The Republican “Contract With America” was stopped dead in its tracks by a picture. After the Republicans gained over 50 seats in November 1994 and ended the Democrats’ 64 year-long monopoly of power in the House (the two interregnums of 1946 and 1952 don’t count), the Republicans’ promise to roll back government seemed unstoppable when Newt Gingrich was sworn in as Speaker on January 4, 1995.

It was all over 105 days later. On April 19, 1995, the Oklahoma City Federal Building was blown up by a man portrayed as a right-wing anti-government terrorist. What enabled Bill Clinton to connect Timothy McVeigh to anyone (such as Republicans in Congress) advocating a reduction of governmental control and intrusion in peoples’ lives was this picture: 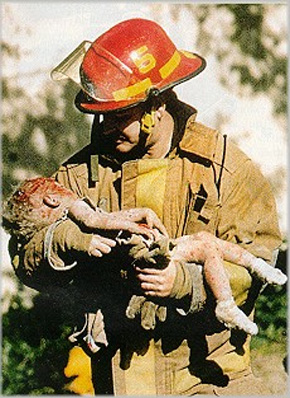 On the cover of TIME and every other magazine in America, it broke people’s hearts – and their will to oppose governmental power.

Timothy McVeigh claimed he blew up the Murrah Building in revenge for the atrocity committed by the US government in Waco a year earlier, when Bill Clinton’s Attorney General, Janet Reno, ordered the FBI to slaughter 87 men, women, and children by poison-gassing them to death.

There was no public outrage at this atrocity committed by our own government because, unlike the Oklahoma bombing, there were no pictures. No photographers were allowed at the site, and only much later did Congressional investigators acquire copies of coroner’s photographs, such as this one of Crystal Martinez, a little five year-old girl, her charred body burned beyond recognition and twisted in the ghastly rictus contortion typical of subjection to hydrogen cyanide. 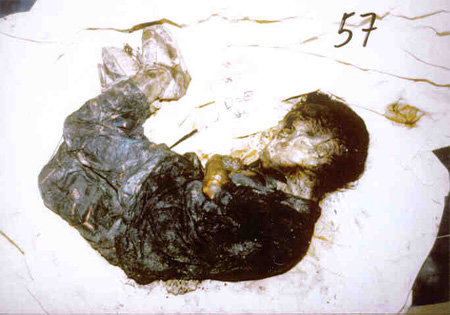 (For a detailed account of how Janet Reno used poison gas upon the Davidians at Waco, see my America’s Saddam, written in 2002.)

This past weekend I attended two very powerful presentations. One was by a lawyer of Terri Schiavo’s parents. As he described the utterly inhumane horror of how she died in agony, the natural question to ask was: How could the American people have allowed this to happen? The answer came when he explained that Judge Greer would not allow her to be photographed.

Had Americans seen pictures or video of Terri – of how alive and aware she was before she was judicially murdered, and of the physical nightmare she became during that drawn-out homicide – they would have been completely revolted and outraged. Judge Greer, knowing this, never let the American people see what he was doing. (He also never had the courage to ever once personally visit and examine Terri himself.)

The second presentation made me sick to my stomach – and that was its purpose. America has condoned the slaughter of over 40 million babies because, without pictures, such slaughter is an abstraction. The Center for Bio-Ethical Reform means to correct that. The pictures of aborted babies they display on their website are simply too sickening for me to display here. You need to be prepared for it.

The reason is that pictures can bypass all the information-and-analysis processing filters we have in our neo-cortex, and go directly to the primitive, emotional structure of the brain called the limbic system. That is why the pictures in this article and the pictures of Abortion No reach us to the core. They are Limbic Pictures, hitting the brain’s emotional bullseye.

The Pro-Life movement has begun to understand the power of limbic pictures. With them, it is going to defeat the Pro-Abortion movement, and now you know why: because the pro-abortionists can’t counter with limbic pictures of their own. They don’t have any pictures. An end to America’s holocaust may be in sight.