2 The Point News » Keeping Your Sanity » KEEPING YOUR SANITY XVI

In Book X §274-335 of Homer’s Odyssey (ca. 750 BC), the god Hermes offers Odysseus a flower called “moly” enabling him to defeat Circe, the sorceress who has captured his men and turned them into swine.

(The scene above is from the 1997 NBC miniseries, “The Odyssey,” starring Armand Assante as the Greek hero.)

That was written over 2,700 years ago, and only until recently has science determined what the “moly” flower really is: the snowdrop. 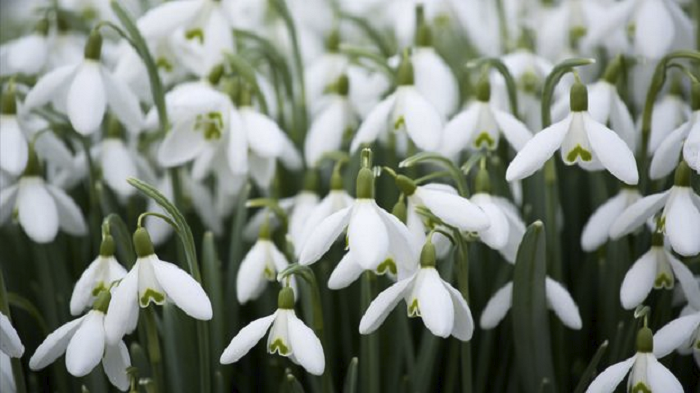 Galanthus nivalis is native to Europe from northern Spain all the way to Ukraine.  Research published in the Journal of Clinical Pharmacology reveals: Homer’s Moly Identified as Galanthus nivalis:

“The antidotal properties of certain naturally occurring medicinal plants against central nervous system intoxication appear to have been empirically established in ancient times. Homer, in his epic poem, the Odyssey, described a plant, “moly,” used by Odysseus as an antidote against Circe’s poisonous drugs. Centrally acting anticholinergic agents are thought to have been used by Circe to induce amnesia and a delusional state in Odysseus’ crew.

We present evidence to support the hypothesis that “moly” might have been the snowdrop, Galanthus nivalis, which contains galantamine, a centrally acting anticholinesterase. Thus the description of “moly” as an antidote in Homer’s Odyssey may represent the oldest recorded use of an anticholinesterase to reverse central anticholinergic intoxication.”

The research suggests that Circe used species of Datura plants widespread in Europe containing atropine, hyoscyamine, and scopolamine causing “anticholinergic delirium”  — an inability to separate reality from fantasy and causing severe amnesia, among many other unpleasant symptoms.

So…. What has all this got to do with Keeping Your Sanity?  The answer has everything to do with a neurotransmitter in your brain (and everyone else’s) called acetylcholine.  Everything your brain does – every thought you have, memory you store or retrieve, every will to move a muscle – is performed with various neurotransmitters with different functions.

Acetylcholine has a number of functions – like enabling your muscles to function, if you don’t have any you’re paralyzed (why Datura can cause paralysis).  We’re interested in what it does for your thinking.  Acetylcholine could be called your brain’s “focus juice” – enabling you to think clearly, to focus and concentrate, to not be distracted, to store and retrieve memories efficiently.

Obviously, you want optimal levels of acetylcholine in your brain, and do not want an overabundance of the enzyme that eats it up – acetylcholinesterase.

This is not easy to do, especially as you get older.  You can’t take acetylcholine directly – your brain has to manufacture it in the cell bodies of its neurons from certain ingredients in your diet. The basic ingredient or precursor is a nutrient called choline.  With other co-factor nutrients, the brain will synthesize or convert it into acetylcholine.  Without vitamin B5 (pantothenic acid) for example, the conversion is minimal.

Choline is highly electric – it needs energy to get past the blood-brain barrier, so it’s use-it-or-lose-it.  That is, lack of stimulation, or creative or active thinking will cause choline to degrade and not get through the barrier.

To do this right, to optimize your brain’s level of acetylcholine, is impossible with just the food you eat – again, especially as you get older.  You need a supplement.  So here’s the secret to my retaining my memory, focus and clear thinking.

Daily for over 30 years, I’ve taken Pearson & Shaw’s Memory Upgrade II. I take a tablespoon in the morning on an empty stomach with a 12oz bottle of soda water.  Mix it with a little plain water and drink it down, then the soda water.  If you mix it with the soda water, it will foam all over the place.

Start with a teaspoon or less at first, get used to it.  All the niacin can give you a niacin flush, which can weird you out as your skin turns red as boiled lobster, but it’s harmless and doesn’t last long.  Note there’s a sugar-free version, Memory Upgrade III, which I’ve begun switching to.  Avoid Memory Upgrade I, however, that has 80% less taurine – and you need the taurine,

Please let me know how it works for you.  It’s worked for me for thirty years.

Now if age is creeping up on you and want to make double sure you ward off any mental decline, you can also take galatamine.  It’s pricey, so I’d sure try Memory Upgrade II or III first.  You take 8mg a day with food.  Amazon offers Life Enhancement’s GalataMind, which is the best quality I know of, but over $1 per 8mg cap.  Be careful when searching for cheaper brands.

We’ll close with a request.  All of these Sanity columns so far have been on ways I think are helpful in retaining our capacity to function while our country as a whole is losing its mind.  I’d like to suggest that you share with your fellow TTPer what ways are working to keep your sanity.

You can post them in the Forum for Sanity XVI – or let me know personally at [email protected].  I’m really looking forward to learning what is working for you.