2 The Point News » Behind The Lines » Free Articles » IS OBAMA CRIMINALLY INSANE? 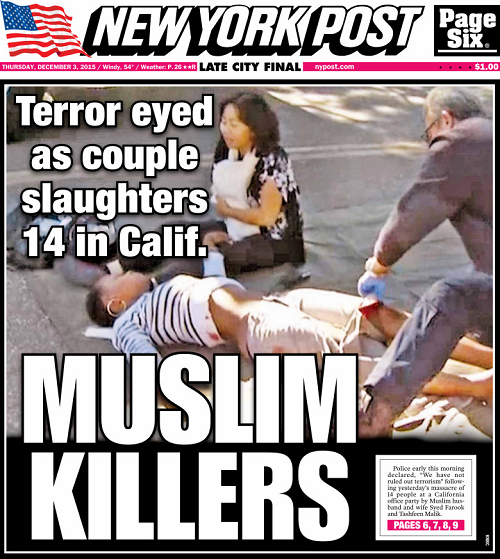 This is the cover of the New York Post today (12/03). At least there’s one media outlet willing to state the obvious.

A Moslem guy in San Bernardino goes to Saudi Arabia and comes back with a wife who’s been trained in using automatic weapons. They collect an arsenal of handguns, AR-15s, tons of ammo, grenades, home-made IEDs and pipe bombs, along with tactical military clothing, body armor and masks. He grows a beard and reads the Koran all the time. His father says: “He was very religious. He would go to work, come back, go to pray, come back. He’s Moslem.”

Yesterday afternoon they — Syed Farook (28) and Tashfeen Malik (27) – left their six-month old baby with grandma, gathered their weaponry, donned their terrorist clothing, drove to where Syed worked and slaughtered as many people as they could in cold blood – people who had earlier thrown a baby shower for them. They were wearing Go Pro cameras to film their jihad.

“They came prepared to do what they did, they were on a mission,” San Bernardino Police Chief Jarrod Burguan said. “This was not a casual workplace argument, it’s a well-planned and thought-out attack.”

Yet the headline across the top of the New York Times’ front page this morning is: Police Seek Motive in California Attack. The Slimes’ story says: “Investigators on Thursday were puzzling over the motives over the attack.” The AP story says: “The FBI is investigating several possible motives, including workplace violence.”

Open up CNN and a huge headline is emblazoned across your computer screen: WHY DID COUPLE KILL 14? Click on the link and the first sentence is: “While police say they know who massacred 14 people Wednesday at a holiday party in San Bernardino, California, the killers’ motives remain a mystery.”

The most obvious fact on earth right now, on a par with it’s cold and dark at the North Pole in December and Mount Everest is a really high mountain, is that there is no mystery, no puzzle – the San Bernardino murderers are Moslem terrorists.

Being literally terrified to state the obvious is The Cost of Envy Appeasement (11/20). It’s a form of insanity, the biggest promoter of which is the current inhabitant of the White House.

“Speaking to CBS News moments after news broke of the shooting” – meaning before there was any information about the killers – Zero wasted no time whatsoever to use the Moslem slaughter to promote for the umpteenth time the disarmament of Americans. The CNN story with that quote followed his lead, turning what should have been about Moslem terrorism into an argument for “gun control.”

CNN of course neglects to mention that California already has some of toughest gun control laws in the US – just like the US murder capital of Chicago.

“We now have a pattern now of mass shootings in this country that has no parallel anywhere else in the world,” claimed Zero. This was a reiteration of what he stated at a press conference in Paris the day before (12/01): “I say this every time we have one of these mass shootings, this just doesn’t happen in other countries.”

John Lott at the Crime Prevention Research Center provides the data proving just how absurd Zero’s claim is: Obama Is Wrong: Mass Shootings Do Happen Elsewhere and More Often. The CPRC website has further data comparing death rates from mass public shootings and bombs in the US and Europe.

But the key to Zero’s perfidy is not in comparing loner wacko killers, like the nutball attacking Planned Parenthood in Colorado last week (Robert Dear) to the Norwegian lunatic (Anders Behring Breivik) who murdered 77 in Oslo in 2011. It is being in complete total 100% estrangement from reality (the definition of psychosis) in denying mass murder committed by Moslems in the name of Islam have anything to do with their being Moslem.

On July 16, 2015, Muhammad Youssef Abdulazeez, a “devout Moslem” and a “violent extremist” as described by the FBI, murdered four US Marines and a sailor in an attack on Chattanooga’s U.S. Naval and Marine Reserve Center. It was a blindingly obvious act of Moslem terrorism – yet the FBI has announced that the Moslem murderer’s motives may “never be revealed.”

This is because Zero has ordered FBI Director James Comey never to do so. I submit that this is an act of criminal insanity by the President of the United States. That and his denial of the very existence of Islamic terrorism in the first place.

His oath of office, his Constitutional obligation, and his most fundamental moral duty as President is to protect the security of Americans to the best of his ability and within his legal authority. He has overtly, consistently, resolutely and perversely refused to do so.

23 acts of Moslem terrorism in America during his presidency, of which Zero has refused to designate any as one of Jihadi Islam.

As Dan Greenfield explains in TTP Wednesday (11/25), Obama Wants to Defeat America, not ISIS. Any doubt of that was removed yesterday when, in his Presidential Thanksgiving Message to America he compared the Moslem invasion of the US he is promoting to the Mayflower Pilgrims.
Here is the appropriate question to ask of him and his supporters:

Meanwhile, earlier in the week (11/22), the WashTimes reported Illegal Immigrants Surge Across Border at Record Rate.Congressman Duncan Hunter (R-CA) is quoted: “The greatest existential threat to this nation right now is this administration’s open-border policy.”What Hunter is saying is undeniably true, i.e., that President Barack Hussein Obama is overtly on purpose creating the greatest existential national security threat to America.It follows then that it is Hunter’s patriotic duty to call for Zero’s impeachment on the floor of Congress on the basis of treason and/or mental incompetence via the 25th Amendment.Obvious evidence for the latter came Tuesday (11/24), when Zero claimed that the Paris meeting on Climate Change next week would help defeat ISIS. Yep, no doubt about it, he’s nuts, fascist nuts.

On Tuesday (12/01) – the day before San Bernardino and Zero’s reaction – Charles Hurt of the Washington Times joined me in asking: Has the President Lost His Ability to Discharge the Powers and Duties of Office? In other words, he says it’s “now time to invoke Section 4 of the 25th Amendment.”

Charles was so stunned at how mentally confused and disturbed Zero was in Paris that he concluded: “Anyone who listened to President Obama speak to reporters in Paris on Tuesday would reasonably conclude it is high time to start drawing up the papers to transmit to Congress for his removal.”

It is now far too dangerous for our personal and national security to be governed by a president who is clearly and criminally losing his marbles.

On Wednesday before the attack, Donald Trump told Alex Jones he wouldn’t support Zero’s impeachment as that would “make him a martyr.” But he had nothing to say about the grounds for impeachment, assuming it would be under Article II Section 4, which states that the president “and all civil Officers of the United States shall be removed from Office on Impeachment for, and Conviction of, Treason, Bribery, or other High Crimes and Misdemeanors.”

An attempt to impeach Zero for treason could very well make him a martyr to many. But to do so on the grounds of mental incapacity is an entirely other matter. It would ignite a debate about his mental functioning which would itself create a great deal of doubt in a lot of minds. Millions of voters would be thinking, “Yes, given all his bizarre actions, maybe he is no longer mentally fit for office.”

There is an antithesis of Zero in his principles, intelligence, moral clarity and courage, and love for America. The statement of Ted Cruz regarding the slaughter in San Bernardino makes this clear:

“Our prayers are with the families of those who were murdered and those who were shot. And all of us are deeply concerned that this is yet another manifestation of terrorism, radical Islamic terrorism here at home. Coming on the wake of a terror attack in Paris, this horrific murder underscores that we are in a time of war.” (emphasis added)

Cruz is the one who, on the floor of the Senate, should request Zero’s removal from office via invoking section 4 of the 25th Amendment. No impeachment is necessary. The 25th offers a different pathway for ridding the White House of this demented man.

I’m asking you to join me in this request. I’m asking you to call one of his offices in Texas (especially if you’re a Texan), or his office in the Russell Building on Capitol Hill   Here are the numbers of Senator Cruz’s offices.

“I’m calling to respectfully request that Senator Cruz, on the basis of President Obama’s refusal to protect us from Islamic terrorism, and his claim that the hoax of global warming is a greater threat than ISIS terrorists, propose that the president be removed from office via Section 4 of the 25th Amendment, as he is clearly mentally unable to discharge the powers and duties of his office. Thank you.”

Of course, you can express this however you like. Just be nice, calm, and respectful when you call. We can do this. And if we get Cruz to heed our call, it will electrify the electorate, placing the thought of Zero’s derangement in the minds of millions.

Make a phone call, change America for the vastly better. It’s an action we all can do.