I AIN’T GOT NOBODY

Let’s get in the right mood.  Relax and enjoy Louis Armstrong’s rendition of I Ain’t Got Nobody – Satchmo sings the lyrics starting at 1:20.

Now – doesn’t that make you feel better?  Especially when you consider that’s the Democrats’ and the Fascist Media’s theme song for 2020?

What more evidence do you need that they ain’t got nobody with their current straw-grasping frenzy over the Queen of Hollywood’s Cesspool of Hypocrisy, Oprah Winfrey?

On Sunday evening (1/07), she got an award from the foreign press – as if anyone cares about them – in a meaningless ceremony called the “Golden Globes” – as if anyone outside of Hollywood has ever heard of it.

The attendees wore black to be in “solidarity” with women harassed by Hollywood moguls – although not one of the ladies who’ve gone pubic over their harassment was invited, or even mentioned by name by any of the awardees, including Oprah.

Instead, in her hailed-to-the-moon “presidential” acceptance speech, Oprah dredged up an ancient white-men-rape-black-woman story from 1944 in Alabama (neglecting to say that was in the Yellow Dog Democrat South) to condemn the Hollywood harassers of today she was too cowardly to name:

“She [Recy Taylor, the woman raped 73 years ago] lived as we all have lived, too many years in a culture broken by brutally powerful men. For too long, women have not been heard or believed if they dare speak the truth to the power of those men. But their time is up. Their time is up.”

With that line, the audience of Hollywood Hypocrites gave her a standing ovation.

Note the typically dishonest segue of Fascist agitprop from a rape in the Racist Democrat South of generations ago to pretending that’s still all of America today – “a culture broken by brutally powerful men” – while completely ignoring her own culture of Hollywood whose brutally powerful men are perpetrating the sex harassment scandal.

She had to ignore it because she’s been an enabler of it for decades.  Like all the horde of celebs who claim they had no idea Harvey Weinstein was a pervert pig, Oprah of course knew all along – as Twitter tracked on https://twitter.com/hashtag/sheknew.

She and Weinstein have been best buds for many years.  Google images for Oprah + Weinstein and you’ll get hundreds of pics of them happily together at scores of events.  This has become the most infamous, taken four years ago (Jan ’14) showing Oprah “kissing” Weinstein, or giving him “a peck on the cheek” at an awards banquet. 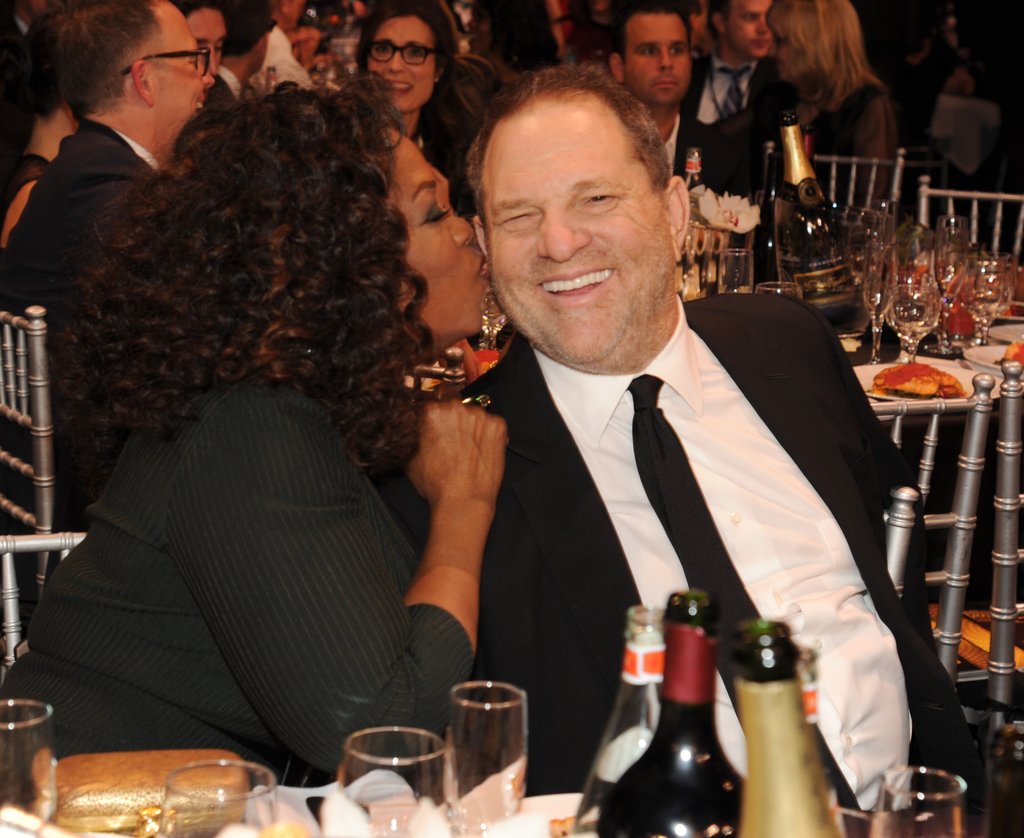 But look closely – and you’ll see it’s not a light kiss or peck.  Oprah is sucking on Weinstein’s ear lobe. 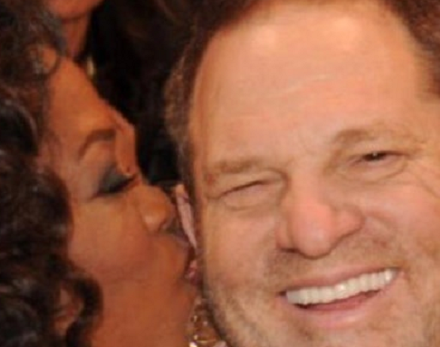 Yet it’s not all about Harvey.  Another of the “brutally powerful men” who rape and abuse women that Oprah supports and defends is Bill Clinton.  As Juanita Broaddrick, who was raped by Clinton in 1978, sardonically notes, “Oprah never mentions my name.”

Enough, however, about hypocrisy, for Oprah is a creature that lives and swims in the cesspool of hypocrisy that’s Hollywood.  As Ben Shapiro observed on Fox (1/08):

As one wag said of these ridiculous “Golden Globes” –

“Hollywood has somehow managed to turn a scandal of its own making into three more hours of colossal self-righteousness.”

For there’s something infinitely worse about Oprah than her being a dishonest lying manipulative hypocrite.

Back in 2013, she was in London to promote her role in the movie “The Butler” – produced by Harvey Weinstein – during which she gave a television interview to the BBC.  She allowed her true feelings of incorrigible racist hatred for whites when she proclaimed that “generations” of white people “have to die.”

She’s still living in the Democrat Jim Crow South of the 1950s.  She wants to send entire generations of whites – whom she imagines are all racists like the poor white trash who raped Recy Taylor 73 years ago – to the ovens like a Black Hitler.

This is not hypocritical.  This is evil, racist moral depravity.  And she’s the Democrats’ hero.

In large part, she’s their savior hero because she’s all they’ve got.  The rest are a bunch of washed-up septuagenarians, kooks, crooks, and Marxists (or combinations thereof) such as Joe Biden, Hillary, Pocahontas, Bernie Sanders, Jerry Brown, Andrew Cuomo, Terry McAuliffe, plus a gaggle of mediocre Senators.

The hysteria over Oprah running is proof of Democrat Desperation.  It’s doubtful that she’ll run.  She’s already being ridiculed in the press, such as the New York Post, for even considering it: 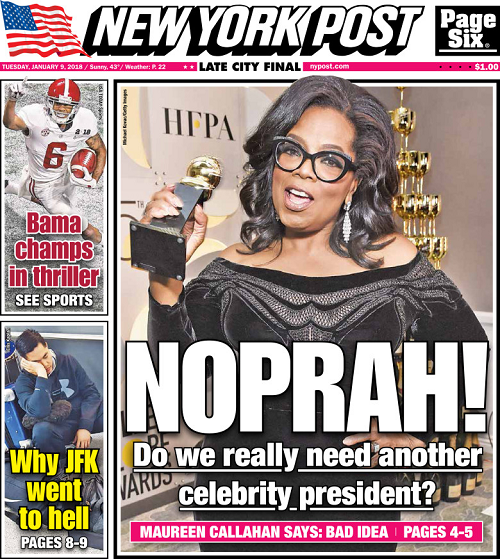 If she does, she’ll be an Epic Fail.  America does not need another black racist hate-whites president.  Been there, done that, never to be repeated.

So with or without Noprah, the Dems’ lament remains – I Ain’t Got Nobody.  It’s their dirge.