HOW TO SEND THE LOCKDOWN GOVERNORS TO JAIL 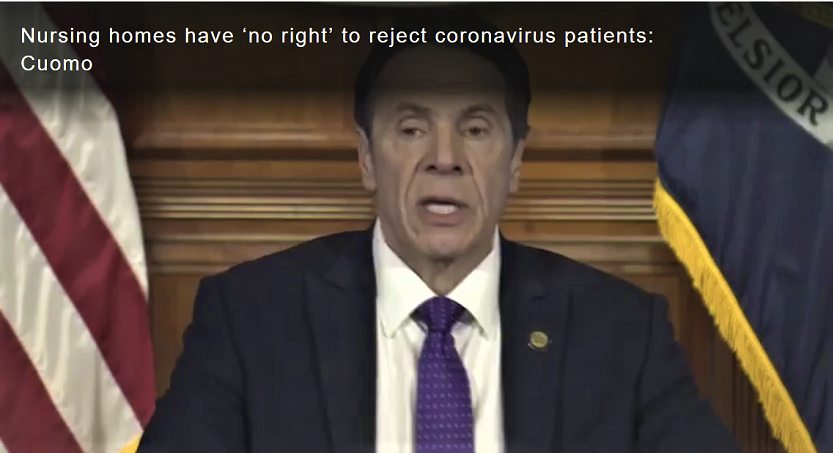 And bankrupt them as well.

What you may not know is that one particular executive order of theirs has caused the death of hundreds, even thousands in their state – and for each one they can be criminally liable and sued personally.

“New York’s nursing homes weren’t allowed to challenge a controversial order to admit patients with the coronavirus, Gov. Andrew Cuomo said Thursday — even though it’s been blamed for spreading the deadly disease among residents.

‘They don’t have a right to object. That is the rule and that is the regulation and they have to comply with that,’ Cuomo said during his daily briefing in Albany.”

In other words, Cuomo used state police power to force nursing homes at the point of a gun to put hospital patients with C-19 who are only “stable” and still test positive in a facility with elderly at-risk but virus-free people.

Last night (5/21), Fox News senior meteorologist Janice Dean told Tucker Carlson  that New York Gov. Andrew Cuomo’s failed nursing home policy should be “one of the biggest” stories of the year after both of her parents-in-law lost their lives to the China virus.

It’s a lot bigger than a big news story, Tucker.  The real story is that Janice can personally sue Governor Cuomo making a wrongful death claim, holding him liable for the deaths of her in-laws, and the pain and suffering he caused inflicted upon their relatives, requiring substantial monetary recompense and punitive damages.

Janice can then launch a class action wrongful death civil lawsuit on behalf of the relatives of the thousands of nursing home virus deaths caused by Cuomo’s order – suing him personally, and the state bureaucratic system that enacted his order, so that in addition to bankrupting Cuomo, the state has to cough up, say, $50K each to the multitudes of relatives joining the suit.

New York State has 62 counties, each with its own elected district attorney.  Find any willing and able to criminally indict Governor Cuomo for criminally negligent homicide in willfully mixing virus-infected and virus-free people in nursing homes causing thousands of deaths.

This is no civil suit for monetary damages.  This is criminal prosecution that can result in imprisonment.  That is precisely where Cuomo should reside instead of the Governor’s Mansion in Albany.

Realize now that a class-action wrongful death civil lawsuit and county DA prosecution for criminally negligent homicide can be initiated against every governor forcing by executive order nursing homes to accept virus-infected patients.

That would include Minnesota’s Tim Waltz, Michigan’s Gretchen Whitmer, Pennsylvania’s Tom Wolf, and California’s Gavin Newsom, among others.  All of them can be sued and prosecuted.

So let’s get the word out on this.  It will be sent to Tucker, Rush, and Sean.  Know any county DA’s with someone in their jurisdiction dying of the virus in a nursing home forced to take infected patients? Let them know.  This is just an intro note on what can be done.  There will be updates on progress to put these Lockdown Governors out of business.