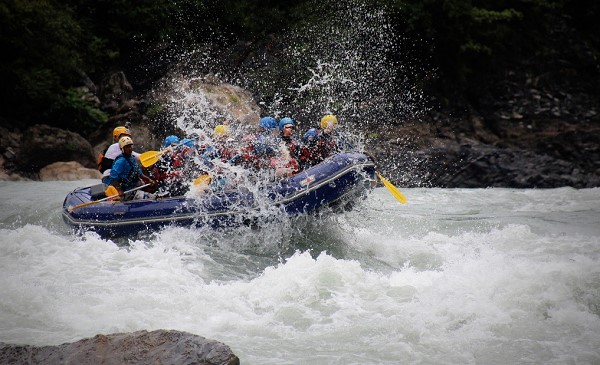 Are you up for a real adventure in your life?  Not group tour stuff but the real deal, the genuine article, the Real McCoy.

Ready?  This is going to be true High Adventure in both senses of the word – for our entire experience is going to be over two miles high (11,000ft/3,400m) in a hidden region of remotest Asia where the world’s most exotic culture still exists… that of Tibet.

Having driven many thousands of kilometers crisscrossing Chinese-Occupied Tibet, I’ve seen how Beijing has destroyed Tibetan culture, turning it into a Disney-type fake theme park for Chinese tourists.

Yet there’s a part of Tibet that the British, when they ruled India, prevented China from capturing.  Monasteries over a thousand years old still flourish there today. 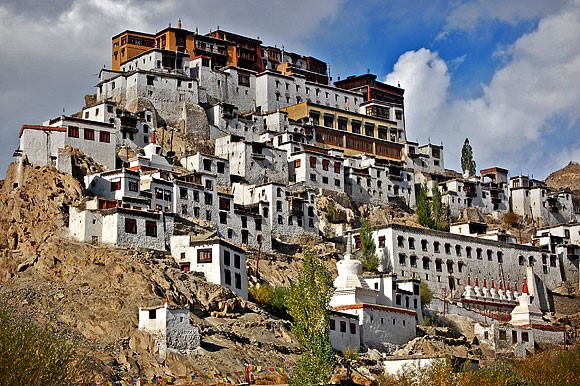 Is it in the Himalayas?  Yes and No.  That is, it’s centered between the Himalayas and the great mountain range beyond them, the Karakorum.    It is the region and surrounding area of the Upper Indus River as it flows out of Chinese Tibet and before it crosses into Pakistan, in the far northwest corner of India.  The section in yellow in the map. (Note: the purple is the Upper Ganges River.) 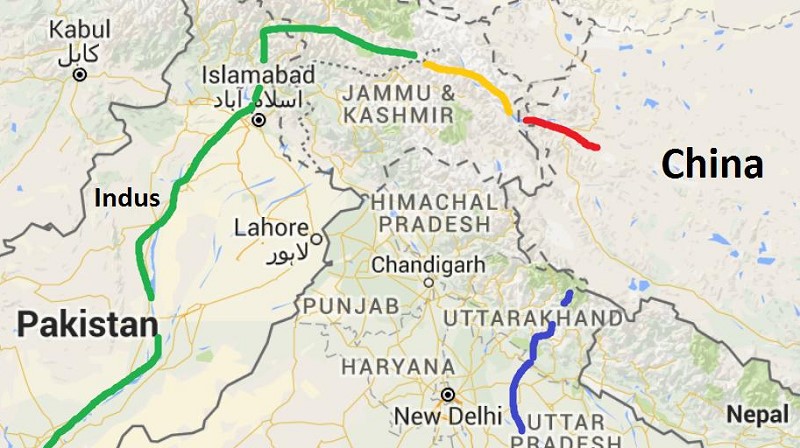 Tibetans who live in the region of the Upper Indus and surrounding side valleys call it Ladakh, the Land of High Passes.  It is wholly Tibetan – here you will find real Tibetan culture truly alive and thriving, replete with astoundingly spectacular Tibetan monasteries or gompas.

Like Thikse gompa pictured above, Leh gompa hovering high above Leh Palace of the ancient Ladakhi kings, or The Tiger’s Nose, Stakna Gompa – 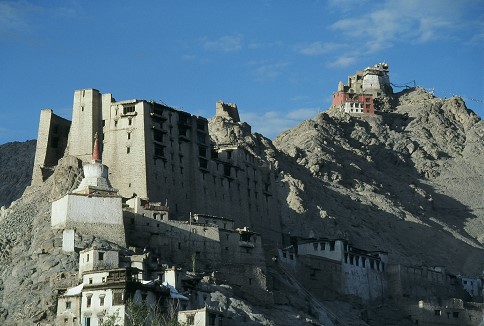 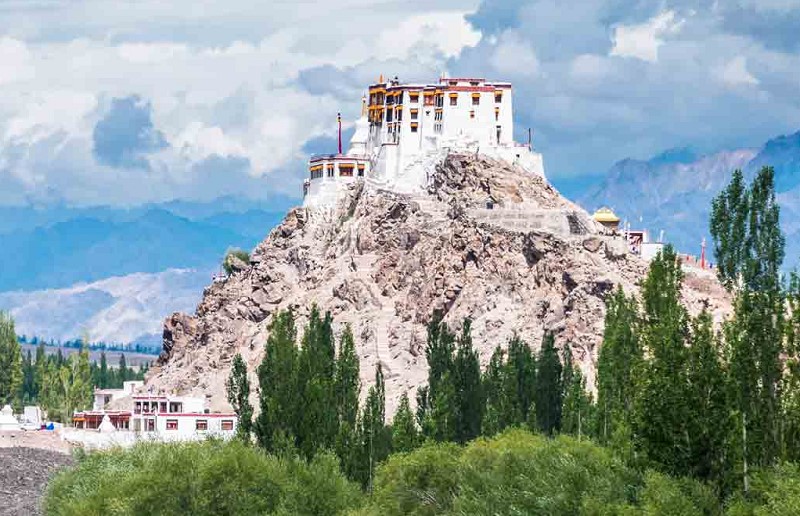 There’s Rizong gompa, glued to the side of a vertical cliff… 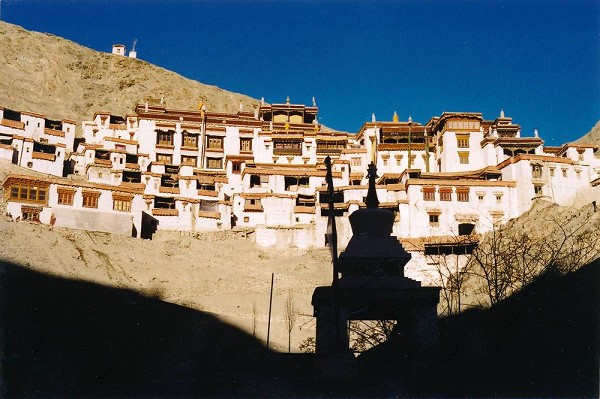 And most remote, mysterious, and mystical of all,  Lamayuru… 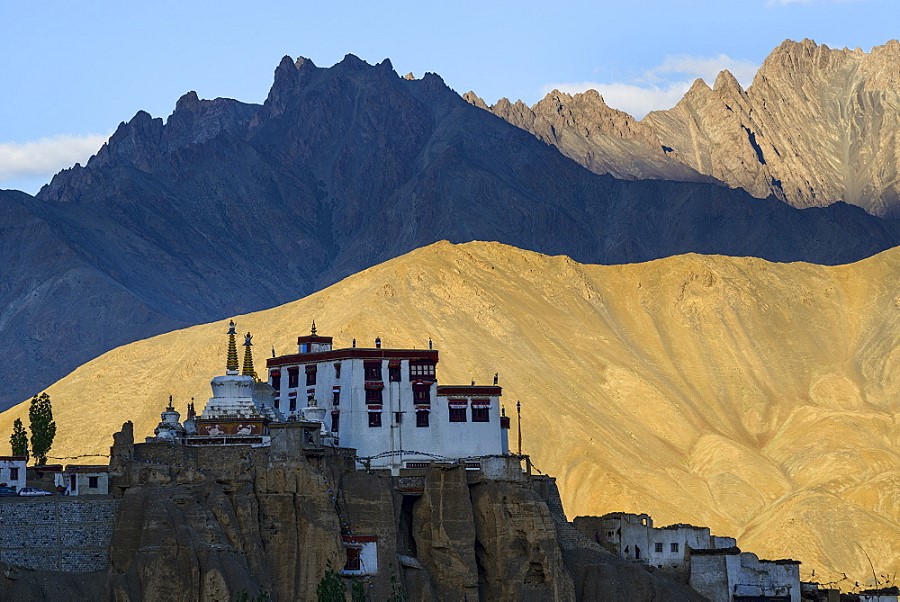 The dukhang or main prayer hall of these gompas are out of a movie, with their gilded and gorgeously decorated statues, wall hangings, and tankhas, sacred paintings. 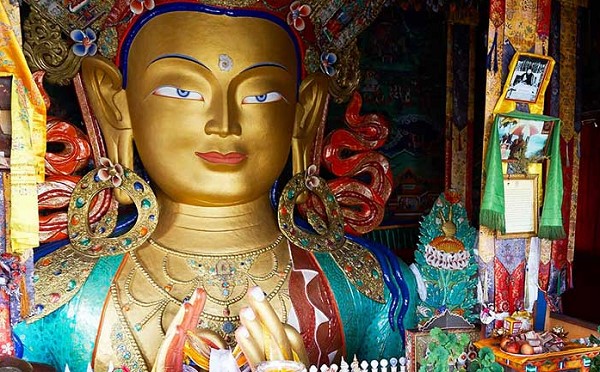 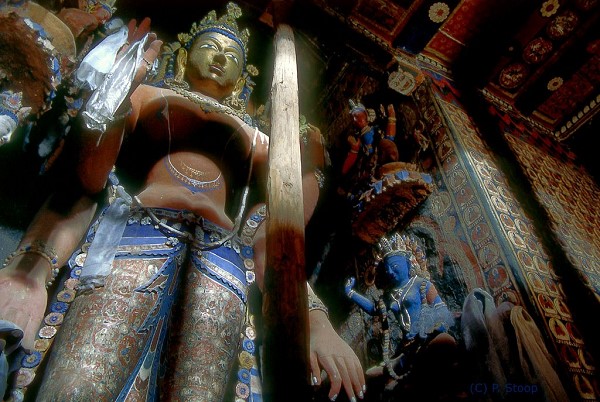 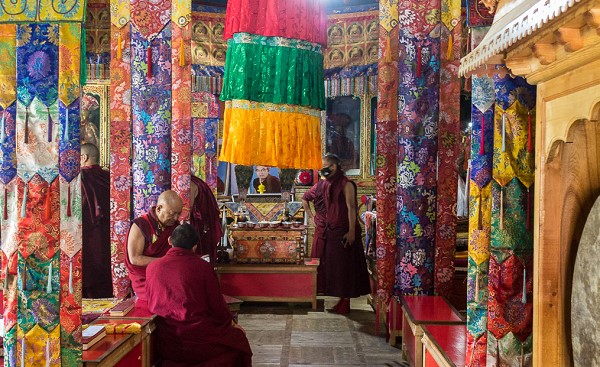 Within Ladakh is an even more remote region called Zanskar – with the extraordinary Zanskar River from source to confluence with the Indus over two miles high and flowing straight through the crest of the Himalayas.

The only entrance to Zanskar is over the 14,450 ft Pensi La (“la” means “pass”) above the gigantic Drang-Drung Glacier surrounded by Himalayan giants over 20,000 feet high. 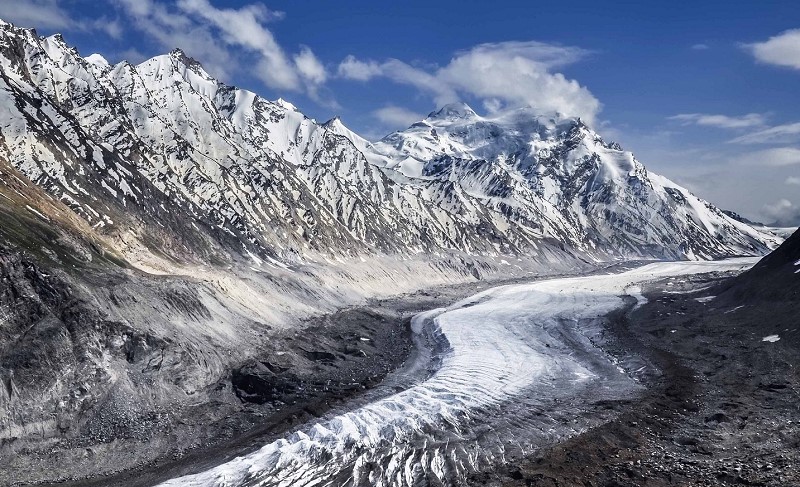 To camp in the Zanskar Valley with the massive Himalayan twin peaks of Nun and Kun (both above 23,000 ft) towering above is truly unforgettable. 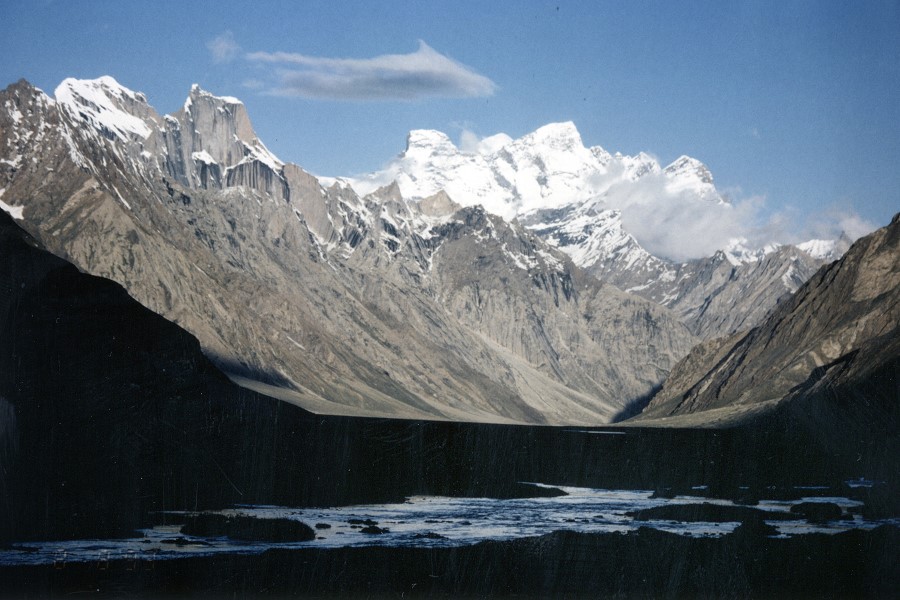 You’re among Tibetan nomads tending their yak herds here, so expect to wake up in the dawn light with curious nomad kids peering inside your tent. 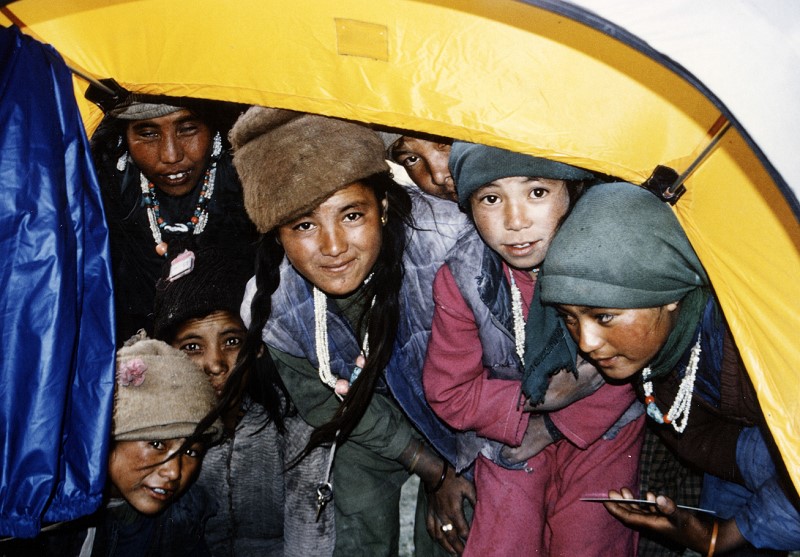 Most unforgettable of all, however, is whitewater rafting through the Zanskar Gorge known as The Grand Canyon of the Himalayas.  The walls rise straight up for thousands of feet while the river bottlenecks in places only a few feet wide.  Running its Class IV and V rapids is one of the greatest whitewater experiences on our planet.  This is High Adventure. 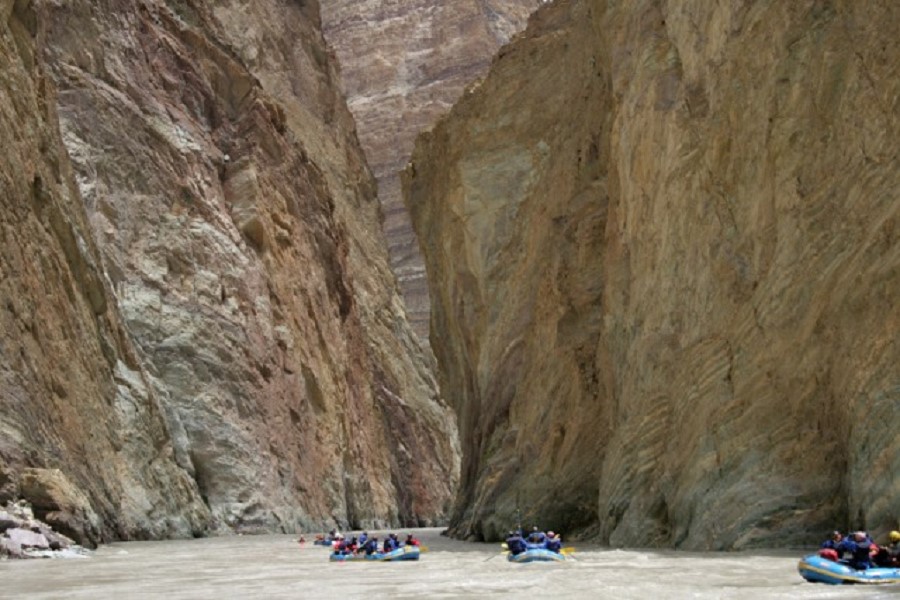 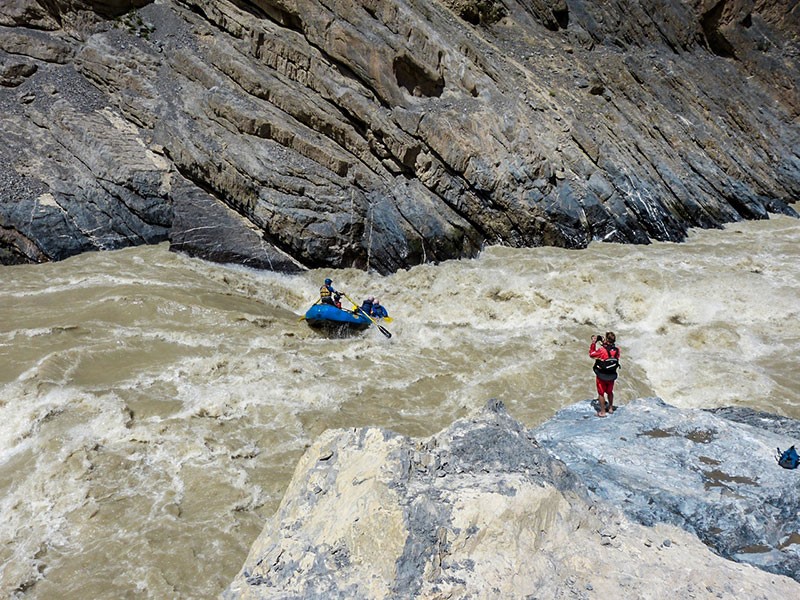 Upon reaching the confluence of the Zanskar with the Upper Indus… 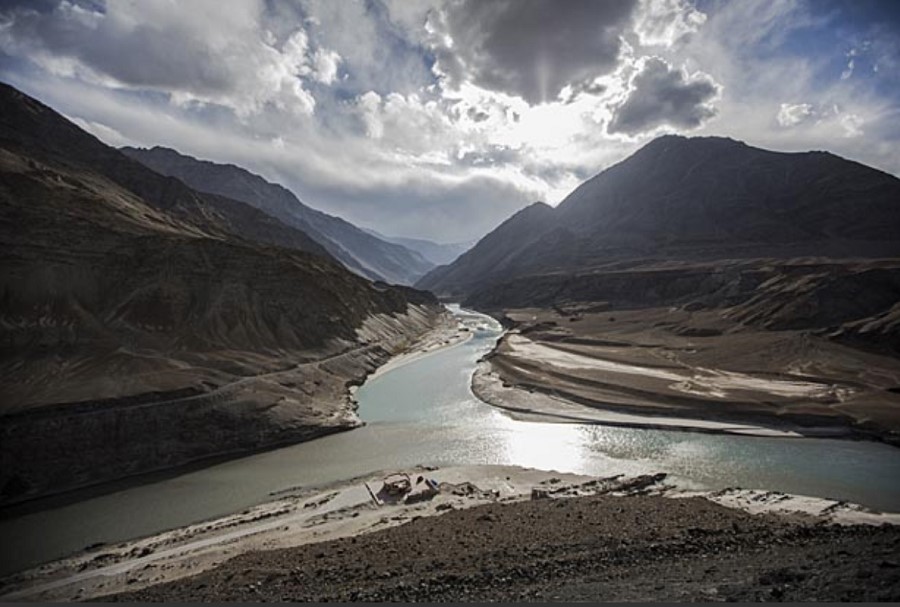 We return to Ladakh’s capital of Leh to celebrate what we’ve had, a true thrill of a lifetime.

In our exploration of Indian Tibet and running the Zanskar this August, what we’ll see, learn, and unforgettably experience is far, far more than this small glimpse in the photos above.  This is Real McCoy High Adventure.

Note that Wheeler Expeditions will also operate this expedition to Ladakh and Zanskar next year, in August 2020.  To apply to participate either this year or next, contact me at [email protected].

Carpe diem. Life is short. The time for a great adventure is now. 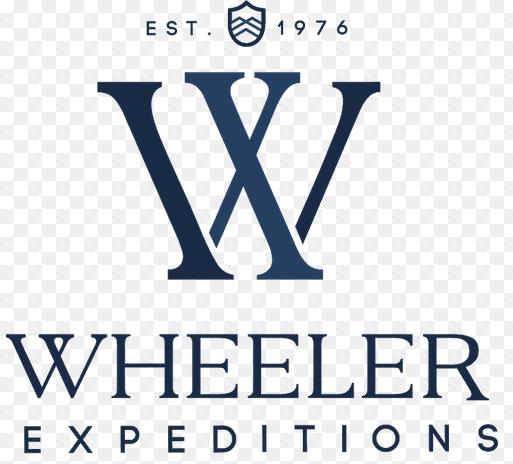