In 1959, the most popular hit song in America was Johnny Horton’s The Battle of New Orleans.  Yesterday (12/07), President Trump, in his twitter feed @realDonaldTrump, inserted among memorializations of National Pearl Harbor Remembrance Day:

As the POTUS is a well-known admirer of America’s 7th president (1829-1837) placing his portrait in the Oval Office, you’d think Kilmeade had written a bio of Old Hickory.  Instead, it’s the story of Andrew Jackson winning the Battle of New Orleans at the end of 1814.

The question arises:  is Trump’s tweet a presidential dog-whistle?  For just about everyone old enough to remember Johnny Horton’s song in 1959 still does.  It’s still ranked as one of the top country music songs of all time.

The Brits were the world’s superpower still smarting from us colonial yokels beating them at Yorktown and were determined to reconquer us.  The invasion force they launched in New Orleans to seize control of the Mississippi River was enormous.  All Jackson had was a rag-tag assemblage of coonskin-hat militiamen, freed black slaves, Choctaw Indians, Jean Lafitte’s pirates, and 58 US Marines – Deplorables all to the Brits.

Yet Jackson’s Deplorables cleaned the Brits’ clock.  Trump was 13 when Horton’s song came out, and no doubt put to memory the most famous verse of the song like every other kid in America did (like me – I was 16), of what our ancestors did to the Redcoats:

So – why would Trump pick this week to hail out of the blue a book about a battle over 200 years ago?  Is he dog-whistling a message to us Deplorables that he intends to do to the Empire of the Left what Andy Jackson did to the Brits in 1814?

If so, he picked this week because his Winning is starting to reach warp-speed.  The week wags began calling it Strategic Omnidirectional MAGA-winning.  Such a deluge of winning that the HFR today is going to have a hard time encompassing its scope.  Might as well dive right in. 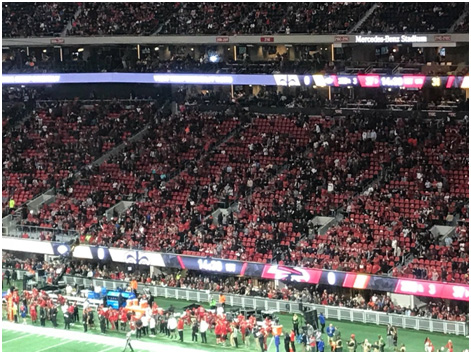 We’ll start with this photo taken last night (12/07) showing more empty seats than fans at the Saints-Falcons game in Atlanta.  Most Saints players were Knee Jerks refusing to stand for the anthem – on the 76th anniversary of Pearl Harbor.

After last week’s epic fail, with Goodell’s $89 million dollar donation to Leftie “Social Justice” causes as a bribe to get Knee Jerks to stand up like men, the NFL continued its suicide mission this week.

After destroying the NFL by siding with Hate America spoiled millionaire brat Knee Jerks instead of the fans, causing losses of over $500 million, you’d think the owners would fire Goodell in a heartbeat.  Nope, on Wednesday (12/06), they renewed his contract for $200 million.

Masochism ultimately leads to suicide.  Capitulation to the Left always results in the capitulator putting a gun to his head and pulling the trigger.  What Trump realizes is that the ultimate masochists are the Lefties themselves – that if you keep triggering all the hate they have for themselves (which they project onto their ethnicity, their culture, and their country), they’ll self-destruct.

The NFL going full self-destruct wacko is only one example this week. 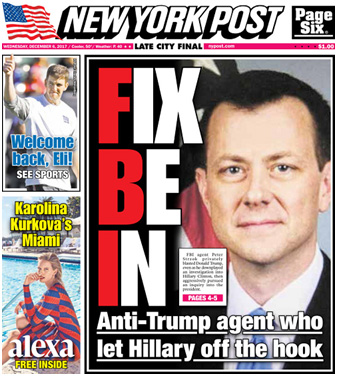 The Daily Mail’s: The FBI’s Forrest Gump: Agent fired from Mueller probe for sending anti-Trump texts to his lover interviewed Mike Flynn before his guilty plea AND Huma Abedin and Cheryl Mills before Hillary was cleared.

But it quickly got Kafka-worse.  On Wednesday (12/06), DOJ revealed there weren’t just a few anti-Trump texts between Strzok and his mistress (he’s married but for how long now?) Lisa Page – there are over 10,000!  Oh, by the way, Lisa Page is married too.

There’s more.  Lisa Page is the Assistant to FBI Deputy Director Andrew McCabe, the corrupt Clinton operative to whom Hillary (via Virginia Dem Gov. Terry McAuliffe) gave $700K to submarine the FBI’s investigation into her email scandal.  (The money was in donations to his wife’s state senate campaign; when she lost the McCabes kept the money as VA laws allows.)

McCabe is also the guy who instructed FBI agents to lie about Benghazi in order to protect Hillary.

Rhodes is the principal orchestrator of Obama’s effort to ruin the Trump presidency with the “collusion” myth and Mueller’s investigation.

And more again:  Today (12/08) came the latest revelation: Mueller’s ‘Right-Hand Man’ on Russia Probe Represented Clinton IT Aide Who Set Up Unsecure Server.  Aaron Zebly, Mueller’s chief of staff at the FBI, was also the guy who physically destroyed Hillary’s Blackberries with a hammer.

Want still more?  During the years Mueller (2001-2013) and Comey (2013-May 2017) were FBI Directors, they covered up numerous acts of sexual abuse of female FBI agents by their male counterparts.

No wonder Former U.S. Attorney for the District of Columbia Joe diGenova told Tucker Carlson on Monday night (12/04) that “James Comey is the dirtiest cop in America.”  That “the FBI is in serious trouble… the FBI’s reputation has been destroyed.”

The same goes for Mueller.  As James Lewis notes in the AT (12/05), “Mueller’s FBI Will Never Recover Its Good Name.”

The slightest shred of Mueller’s credibility has been nuked.  On Monday, the Wall Street Journal editorial board called for him to resign, and implied that Deputy Attorney General Rod Rosenstein, who appointed him, needs to resign from DOJ.

And at last, Pub Congresscritters are stepping up to the plate: GOP Ramps Up Attacks on Mueller.

“Republicans will now be investigating the unprecedented bias against President Trump that exists when we allow people who hate the president to participate in the investigations against him.  A witch hunt continues against the president with tremendous bias, no purpose and no end in sight.  It has to end.”

Mueller’s hubris has morphed into self-destruction.   Here’s how Michael Ramirez puts it: 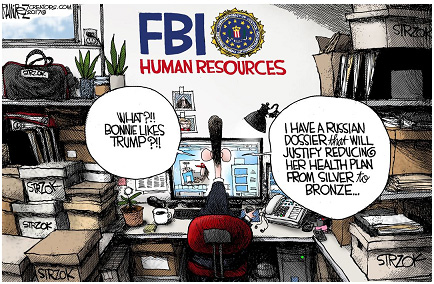 You may not get a clearer example of the Hubris-Masochism Combo leading to “I want to kill myself” humiliation than the Dems’ plan to impeach Trump via Roy Moore getting MOABed today.

The Dem Libtard Toad Brains had it all figured out.  Get their most loathsome jerk – whom they all despised – to cave to their chorus demanding he resign.  Which he not-really does, saying he’s really innocent and his accusers are liars but he’ll resign anyway “in weeks.”  Meaning once Roy Moore wins next Tuesday (12/12), FrankenSlime announces he won’t resign unless fellow sex abuser Moore resigns.

Upon which, the entire Dem-FNM (Fake News Media) goes en masse full tilt freak out, in calling for Trump’s impeachment because he engaged in guy locker room talk, proving he’s an abuser like Moore – with the shriek that Moore must resign blowing everyone’s ear drums out.

‘Tis many a slip ‘twizt cup and lips, noted The Bard.

That sure settles that – combined with Doug Jones ticking off every Black in Alabama with his stupid pander-ad, while the libtard editor of hyper-lib Mediate announces on CNN Headline News (12/07) that “it’s time to look down our nose at the constituents of Alabama” for voting for Roy Moore.

The entire Big Plan of the Left has suddenly gone sideways.  Moore landslide-wins on Tuesday with accusations against him blown up, Franken quits to utter no avail, Mueller’s disgraced, the Demtard-Lying Swine realize Trump will never be impeached and they all get to drink bile for breakfast, lunch and dinner.

Sometimes it’s feels so good to bask in Schadenfreude.

But wait – it’s just beginning to get worse!  For them, that is, not us.  Here’s the astonishing compendium of what has been the POTUS’s Winningest Week so far.

Sunday (12/03): Donald Trump Pulls US Out of UN Global Compact on Migration.  This set lefty hair on fire all over the world – Trump standing up for the sovereignty of US borders as opposed to Soros-Globalist open borders, an outrage!  The tears in the link are those of the London Guardian.

Even funnier:  US Pulls Out of UN Commitment to Protect Refugees and Migrants.  Lefties are scandalized Trump would rather protect Americans instead.

Monday (12/04): Donald Trump Shrinks Federal Monuments In Utah: ‘You Know Best How to Take Care of Your Land’.  The Federalies claim unconstitutional ownership of almost 30% of the entire US, principally in the West: 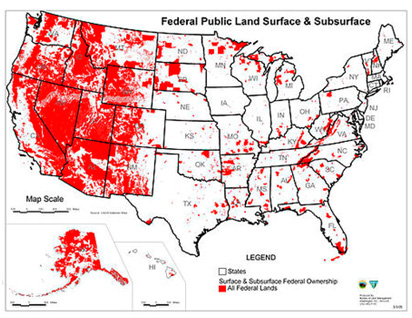 Ignoring the left’s wailing and teeth-gnashing, Trump has begun the process of returning this stolen land to the states.

Monday (12/04): Victory for Trump: Supreme Court gives the go-ahead for President’s controversial travel ban to be put in place IMMEDIATELY.  All lower court rulings by libtard judges are now blocked.  Note the decision was 7-2, only Ginsburg and Sotomayor dissenting.

Tuesday (12/05):  How Trump Turned the Tide – Border Crossings at 45 Year Low.   In this regard, please consider reading and participating in #KatesWall on Twitter.

The night before (12/05) when it was fully known Trump would shortly officially recognize Jerusalem as Israel’s capital, Obama went Full Demento by comparing Trump to Hitler.  Trump’s successes which necessitate the demolishment of his legacy are driving Zero into almost criminal insanity.

The UN has done much more to damage the prospects for Middle East peace than to advance them. We will not be a party to that. The United States no longer stands by when Israel is unfairly attacked in the United Nations. And the United States will not be lectured to by countries that lack any credibility when it comes to treating both Israelis and Palestinians fairly.”

No doubt she also was saying the US will no longer be lectured to by Former President Zero.

Thursday (12/07):  This is going to make you laugh until you cry.  Yesterday the Daily Caller discovered A Massive Troll of Obama in the Trump Christmas White House.

You know that the Trump official White House Christmas card wished everyone a Merry Christmas, while Zero for all 8 years refused to do so, sending out a limp-wrist “Happy Holidays” instead.  So what is on framed display at the White House today?  The Trump Christmas Card with all eight of Zero’s below: 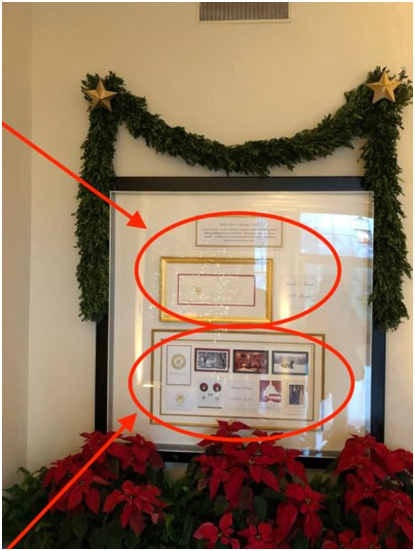 America has never had a President as cool as PDJT, not since Ronaldus Magnus, or possibly since Andy Jackson.

Friday (12/08): The Jobs Report out of the Labor Dept’s Bureau of Labor Statistics is simply historical.  228,000 jobs  — and 40,000 high paying manufacturing jobs, were created last month, 2.2 million since the election with unemployment at a 17-year low, and Hispanic unemployment at 4.7% – the lowest in US history.

Trump can’t be blamed for celebrating:

Sorry, kid, you’ll have to suck it up, ‘cause we’re just getting started.

Yet, inconceivably, in the midst of all this on Wednesday (12/06), Democrat Al Green forced a House vote on a bill to impeach President Trump.  58 Dems voted Yes.  58 AINOs – Americans In Name Only – who have ceased being democrats, small-d as advocates of democracy, refusing to accept a democratic election.

Green himself is a flaming Black Racist in a district – Texas’ 9th CD, part of Houston – that’s gerrymandered 5.5% White; 38.0% Black; 12.2% Asian; 38.3% Hispanic.  He, like his fellow 57 colleagues and the entire Hate Trump-Hate America Left, has gone moonbat psycho.  They have willfully chosen to become mentally ill and desperately require psychiatric help.

Here is the advice we should give them:

You guys lost. It’s time to stop being demented moonbat psychos, tormenting your souls with rage over not getting your way.  It’s time to start being Americans again.  To get off your knees, to realize no one else cares about your whines and anger, to join us in loving your country and supporting your president who is doing his best for America.

Do that and we welcome you, bygones are bygones, you’re Americans once more.  Don’t do that and… we don’t care.  You will have become irrelevant to our country’s future.  We’ll keep winning and you’ll keep losing.  Your choice, your call.

There was so much winning this week that the HFR couldn’t get to it all.  Please feel free to add to it in the Forum.  And please, don’t get tired of winning.