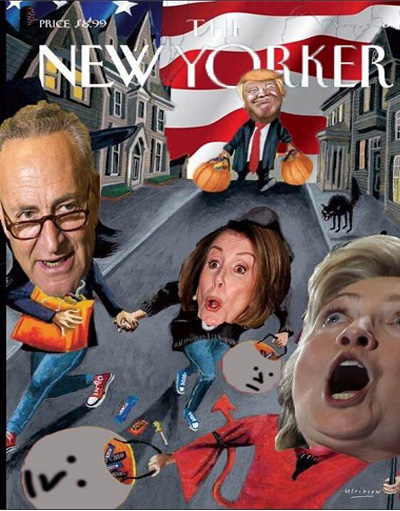 Welcome to the Happy Halloween HFR!  There will be plenty more trick-or-treats in the next 80 hours or so until Election Day, but those this week have been corkers.

In addition to holding massive record-breaking rallies all over the country for GOP candidates with his inexhaustible energy, the President has been triggering the Enemedia into meltdown after meltdown all week long.

He freaked them out yet again yesterday afternoon (11/01) in his White House speech, here in full at TTP:  Our Illegal Immigration Crisis and U.S. Border Security.  This is what in particular gave them ‘splodey heads:

Why Trump is doing the right thing is explained by Congressman Clay Higgins (R-LA) who is also a Reserve Deputy Marshall for a city in his district:

This really is an invasion.  Here’s a map the London Daily Mail has up today (11/02) showing there are currently four illegal invasions underway right now.  This has to be stopped in its tracks.

Luckily, we have just the President to do it: 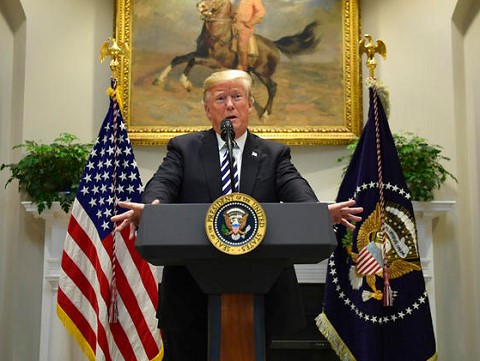 Proof that POTUS is deadly – deadly – serious is this: U.S. Military Sending Miles and Miles of Concertina Wire to SW Border (10/30) and lots more.

How lots?  Click on the video in this Tweet to see how loaded for bear this military armaments train headed for the border is.  Note that a red-pilled eagle eye spotted ADS Systems on the train.  Deploy these bad boys and the illegal invaders won’t come close to our border again.

The other Trick-or-Treat October Surprise the President pulled on the Dems was his bombshell revelation on Tuesday (10/30) that next week he will issue an Executive Order eliminating Birthright Citizenship.

The reaction of every libtard in Congress and the Enemedia is the funniest thing we’ve seen in many years.  All of a sudden they’re running around with their hair on fire screaming, “THIS IS UNCONSTITUTIONAL!!!”

Can you recall one single time libtards have ever showed the slightest concern about any of their causes – like Roe v. Wade, Obamacare, the EPA, ad infinitum – being unconstitutional?  Here is a typical example:

“At the U.S. Capitol on Oct. 22, 2009, CNSNews.com asked then-Speaker Pelosi, ‘Madam Speaker, where specifically does the Constitution grant Congress the authority to enact an individual health insurance mandate?’

Everything the Left wants to do is unconstitutional!  But the instant one of their sacred cows bred to ruin America is gored, they go apoplectic claiming it violates their twisted invented interpretation of some Article or Amendment of the Constitution.

No more “Living Constitution” that needs to be reinterpreted for modern times.  Oh, no, now libtards are Born Again Originalists.

Once again, El Donaldo suckers the libtard Dems down the garden path.  I see, you want an Originalist 14th Amendment?  Well, it just so happens I have an Originalist 5-4 majority now, soon to be 6-3 when RBG gives up and I replace her with Amy Coney Barrett.  I can hardly wait to take my No More Birthright Citizenship EO for a SCOTUS ruling, let’s go!

Actually, that’s what Trump plans to do with  most every libtard lower court judge ruling, or House obstruction if the Dems win on Tuesday – keep applying his executive actions as a co-equal branch of government, ignoring the other two until he gets a SCOTUS decision.

He’s been waiting to do this after the midterms – but he telegraphed it yesterday (11/01) in an interview with the WashTimes: Trump Says Pelosi Subpoena Threat ‘Illegal,’ Grounds for Supreme Court Battle.

Pelosi Galore – indeed, the entire Dem Party – is waaaay out of their league with this POTUS.  He will steamroller them so badly they’ll curse the date of November 6 for winning the House majority.

Yet the odds now are that won’t happen.  One reason was made clear by Democrat strategist Mark Penn today (11/02):  Democrats Don’t Understand This Surprising Secret of Trump’s Success.

What would that be?  Not his insults, but his ideas: “Trump has deployed more specific issue ideas than any President in a very long time.”

And it turns out, Dems have no ideas at all, all they’ve got is insults.

“You probably know President Trump’s positions on almost every major issue… what exactly does Barrack Obama, or Chuck Schumer, or Nancy Pelosi stand for? Other than investigations and impeachment, what are the Democrats running on?”

Penn is pointing to a double-whammy that dooms the Dems.  Yesterday (11/01) in Columbia, Missouri, the President vitriolically denounced the “lunatic” Dem birthright policy that has led to a “birth tourism” industry – and vowed to put an end to it all.

All the Dems can do is screech schoolyard insults in response, like “racist!” which now means nothing more than “I hate you, you stink!”

And here’s the bottom line.  Get a load of the headline this morning about that Missouri rally:  Trump Gets 27,000 in 50° and Drizzle in a Cornfield – Obama Can’t Fill a High School Gym at Room Temp.

Okay, very well, but what is going to happen on Tuesday?  Here’s what TTP’s resident psephologist Jack Kelly thinks:

“Over the last 40 years, the president’s party has lost an average of 26.3 seats in the midterm election two years into a presidential term. But there is a striking disparity between Democrat losses and Republican losses.

To be purely partisan, I’d say it’s because Democrats lie like rugs when they run for office, then implement disastrous policies.

A more objective analysis would attribute it primarily to the fact that the drop off in voting from presidential years has been greater for Democrats than for Republicans.

And, of course, each midterm has been affected by issues and circumstances unique to it. Our big loss under Reagan happened mostly because we were still in the grips of Carter’s hair-curling recession. It didn’t become Morning in America until early in 1983.

The gain in 2002 came at a time when the vast majority of Americans were giving Dubya high marks for how he responded to 9/11.

Generic reasons for why the president’s party loses seats in the midterms are:

*The base of the losing party in the presidential election is more motivated to vote in the midterms.

*Swing voters want a check on the power of the new president.

*Swing voters are disappointed because the new president failed to fulfill campaign promises.

Which brings me back to Democrats lie like rugs when they run for office, then implement disastrous policies. The differences between the pie in the sky bye and bye Carter, Clinton and Obama promised, and what they actually delivered was YUGE.

Those who voted for him in 2016 — and many who didn’t — are thrilled with Trump’s performance in office. No president ever before has accomplished so much for so many in so short a time. No disappointments here.

I don’t know what, if any, predictive value there is in this reprise of recent political history. What is past is prologue… until it isn’t. But we shouldn’t let the Lying Swine gaslight us about average losses.

Democrats are farther from +23 than Pelosi Galore imagines.  While it’s pie-in-the red-wave-sky for the Pubs to gain House seats like they will in the Senate ( at least 4, maybe 7), my bet is they’ll lose about a dozen or so, nor more than 15.  Botoxic Pelosi can kiss her gavel, and Mad Maxine with Adam Full-of-Schiff their chairmanships, goodbye.”

One thing you can count on 100% is that there will be surprises on both sides.  I bet there will be more on ours than theirs – like Connecticut might elect a Pub Governor.

Another reason to be optimistic is the extraordinary early voting by Republicans outpacing that of Dems in race after race across the country – as chronicled by Larry Schweikart and by FoxNews.

At his yuge rally in Florida on Wednesday (10/31), the President was shocked by how many in the crowd had already voted.  Everyone loved and applauded his response.

The bottom line for more surprises for us than them is the real bottom line – the blaring main headline on the Drudge Report today:

The choice is clear, it’s…

Trump’s America is on a roll, folks.  It’s going to be a Rock and Roll Tuesday.

Ps:  Thanks for all your support of Dana Rohrabacher.  He’s suddenly jumped to a 9-point lead, thanks in part to you.  But don’t let up, there’s still four days to go which can be a long time in politics.  Helping Dana is one sure way to help save the House.