That’s celebrity impressionist Jeff Trachta, “The Singing Trump,” performing on America’s Got Talent.  And he’s right about the POTUS – the Dems “can’t touch this” for presidential achievement in both performance and substance.

Not only is he a master showman with dragon energy, he is a master achiever for America that no one in our history has come close to in his first term – as you saw in TTP on Wednesday, the incredibly long list of The Accomplishments of President Trump. 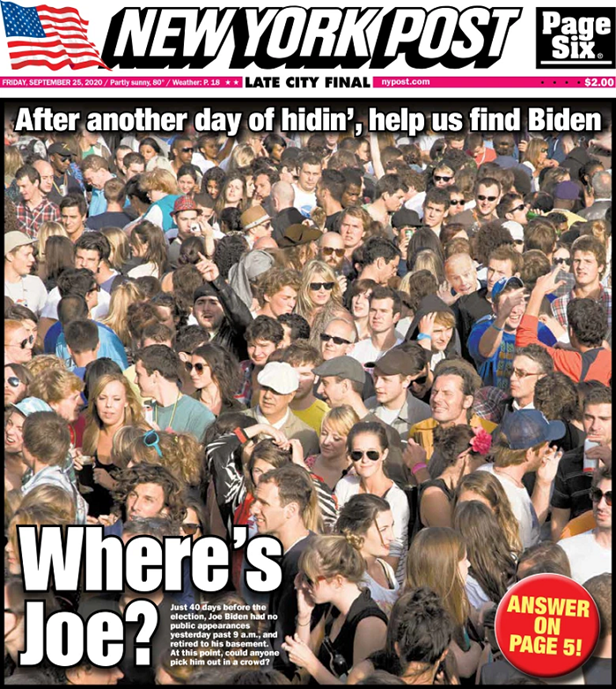 Although they photoshopped Joe Waldo playing peek-a-boo behind the guy in the blue shirt-blue cap (middle-right, look first for orange shirt guy), he’s in his basement of course, with his campaign placing a “lid” on him.  POTUS observed:

So how is Hiden Biden going to hold up in the most-watched debate in world history next Tuesday (9/29)?

There is an anonymous internet post making the rounds purportedly by an ex-Biden staffer claiming Joe is on Alzheimer’s medication called Namenda (generic Memantine), which helps him be more lucid but is causing him two common side effects, incontinence and agitation.

“The medication has made Joe incontinent. Though his ‘good days’ have increased dramatically, he can barely get through a press event without running to the bathroom. That’s why he didn’t take questions after announcing Harris as his running mate. They weren’t afraid of the questions, the press loves him… they were afraid he was going to piss his pants on-camera.

Lately, Jen’s been having closed-door meetings to discuss which brand of incontinence pads would be best to purchase. Seriously, a group of paid staffers sat around and discussed which brands were the least visible, the least likely to leak, and wouldn’t audibly ‘crinkle’.”

You’ve all seen video clips of how easily Namenda Joe gets agitated and loses it.  So not only will POTUS do his best to keep him going with no p-break, but will be constantly sticking rhetorical needles in him until he explodes.

There’s also the strong suspicion that Sleepy Joe is just that – i.e., that he suffers from a condition of dementia called Sundowning.  From the Mayo Clinic:

“The term ‘sundowning’ refers to a state of confusion occurring in the late afternoon and spanning into the night. Sundowning can cause a variety of behaviors, such as confusion, anxiety, aggression or ignoring directions. Sundowning can also lead to pacing or wandering.

Sundowning isn’t a disease, but a group of symptoms that occur at a specific time of the day that may affect people with dementia, such as Alzheimer’s disease. The exact cause of this behavior is unknown.”

This is why his campaign only schedules events for him in the morning or early afternoon.  However – the First Debate in Cleveland next Tuesday is from 9:00 to 10:30 at night eastern time.  It may be lights out for Sleepy Joe, hit by a Namenda-Sundowning double-whammy while being hammered by the best debater in America.

No doubt he’ll be coached to deliver memorized smear slogans trying to rattle Trump’s cage, which we’ll expect will be swatted away like flies.  Yet the slogans are what the commie media will fixate on in a desperate attempt to headline how good Namenda Joe performed.

How desperate are they really, though?  The commie media, the Biden Campaign, the entire Dem Party – if they were genuinely concerned their candidate, the most pathetic in US presidential campaign history, were going to lose they wouldn’t have nominated him in the first place.  He’s been in Dementia City for a long time, they well knew.

Which means their game plan all along is to cheat to victory.  It’s the only game plan they have – and it’s coming true before our eyes, in the key battleground states of Michigan, Pennsylvania, and now on Tuesday (9/22) North Carolina: North Carolina Joins Michigan and Pennsylvania – Will Accept Late Ballots For 9 Days After Election and Ballot Harvesting.

Let’s be clear:  if Trump loses these three, he loses the election.  So the cheating has to be stopped by the federal courts.  Armies of Dem lawyers are persuading state judges all over the country to order cheat-by-mail and ballot harvesting, while Trump campaign lawyers are filing lawsuits to stop them.

Update:  This afternoon (9/25) the GOP sues to stop late ballot ruling in Michigan.

The Lefty Politico gives a surprisingly balanced analysis: Ginsburg’s death gives GOP an edge in 2020 legal fights.  This is well worth reading, for its discussion on how Roberts has voted on such issues, and on the circuit courts which will adjudicate before SCOTUS.

POTUS has substantially altered the balance in several.  The 7th Circuit which includes Wisconsin is now 9R/2D, for example. The likelihood is conflicting circuit decisions will reach SCOTUS and soon.  Politico takes Ted Cruz’s statement seriously: “We cannot have Election Day come and go with a 4-4 court.”  And notes that “Roberts… would try to avert such a tie vote at all costs.”

“We’re going to have a victory on November 3rd the likes of which you’ve never seen. Now, we’re counting on the federal court system to make it so that we can actually have an evening where we know who wins. Not where the votes are going to be counted a week later or two weeks later.”

POTUS said that less than 24 hours after RBG’s death was announced.  He promised his court nominee would be a woman.  The must-read here – along with TTP’s ACB – The Worthiest Replacement for RBG (Tuesday 9/22) – is John Gizzi’s Amy Coney Barrett Near Cinch last night (9/23).

I’ve known John for many years, his sources are superb, Chris Ruddy’s Newsmax is lucky to have him.  What he says about ACB standing next to POTUS tomorrow afternoon (9/26) is a very good bet.

My bet is that she’s going to be confirmed fast.  The Dems, no matter how Schumer fulminates, know they’re going to lose with McConnell herding in every Pub vote (including Romney and Murk, most likely Collins too as the Pub vote will collapse for her if she doesn’t).  Joe Manchin (D-WV) may well Dem defect too.

Grassley will chair the hearing and not put up with any Dem attempt at a circus, Feinstein as the minority chair will simply be befuddled as she’s lost it at age 87.  Delays are futile, 35 of these guys and gals are running on Nov 3rd and want to get back on the campaign road ASAP.

The Court’s Fall Session opens on Monday, October 5. Don’t be surprised if its new Justice Barrett is sworn in mere days later.

The Court will then be 6-3 Conservative.  Roberts can revert to his being an Originalist as he is no longer the key swing vote.  POTUS is betting his farm – and America’s – that its decisions will enable an election ending on Election Day and not weeks later.

But wait!! Stop the presses, extra, extra, read all about it!  Talk about a must-read, from Red States’ Nick Arama late last night (9/24): Backfire: Dems Suddenly Pivoting to Promoting In Person Voting, the Reason Why Tells You Everything.

Nick refers to this on Axios earlier in the day: Democrats’ Mail Voting Pivot. Nick comments:

“So why the big switch after claiming that everyone was going to die if they voted in person? And how do they justify this after screaming about how this could endanger people?

Because just like with the riots, they have grievously miscalculated and realized that this gambit might hurt them more than it would help them… They’re finally getting the massive chaos [mail-in voting] is all going to cause and they have no one to blame but themselves.”

Read both Axios and Nick – you’ll love it.

By the way, Nick is right about the Dem Riots.  The rioting that has just exploded in the last two nights in cities all over – New York, Chicago, Portland, Denver, Minneapolis and elsewhere, not just Louisville – over Breonna Taylor are the last straw for many millions of us.  Especially when The Truth Emerges, as you learned on TTP yesterday.

The police report reveals that Breonna was standing next to Kenneth Walker when he opened fire on the police, shooting and almost killing a police officer.  The police of course fired back, with six bullets fatally hitting Breonna and not one bullet hitting Walker.  The only possible reason is that he used her as a shield to protect himself.

Please get that fact out to as many as you know, with letters to the editor of your local publications.  Everyone except Communists are sick and tired of BLM/Antifa rioting and want whatever it takes to put an end to it.  Whatever means whatever.

Now I’d like to switch gears and talk to you about Chickasaw, Alabama, in hopes that there are TTPers who know Senator Josh Hawley.  The connection between the two is a 1946 Supreme Court decision, Marsh v Alabama.

You can read the details, but the bottom line is that it applies exactly to the big social media giants like Facebook, Twitter, Google and YouTube, in which a privately owned public square is deemed a public forum where the First Amendment applies.

Hawley is having regular meetings with AG Barr and at the White House and is finally realizing legislation now is worthless.  What he and Barr need to know is the solution:  By quoting the exact wording of Marsh v Alabama and subsequent SCOTUS decisions based on it, have the FCC declare Facebook, Twitter, Google and YouTube a public forum.

What Sen. Hawley and AG Barr also need to know is such a FCC ruling need only apply to the giant social media virtual monopolies due to Metcalf’s Law, which shows that the value of a network is proportional to the square of nodes or users it has.  That makes them equivalent to the monopoly the company owning Chickasaw, which is the basis for the Supreme Court ruling its privately owned public square was a public forum.

I’ll be doing my best to get this to Sen. Hawley, but the more who explain this to him the better.  Please help if you can.

We end the week in anticipation for POTUS’ announcement at 5pm tomorrow on who will be his SCOTUS nominee. 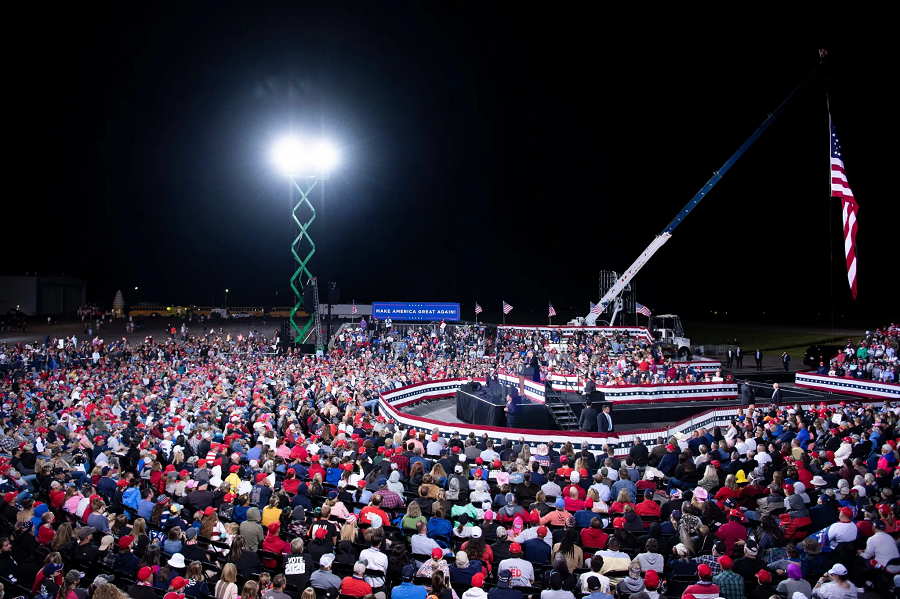 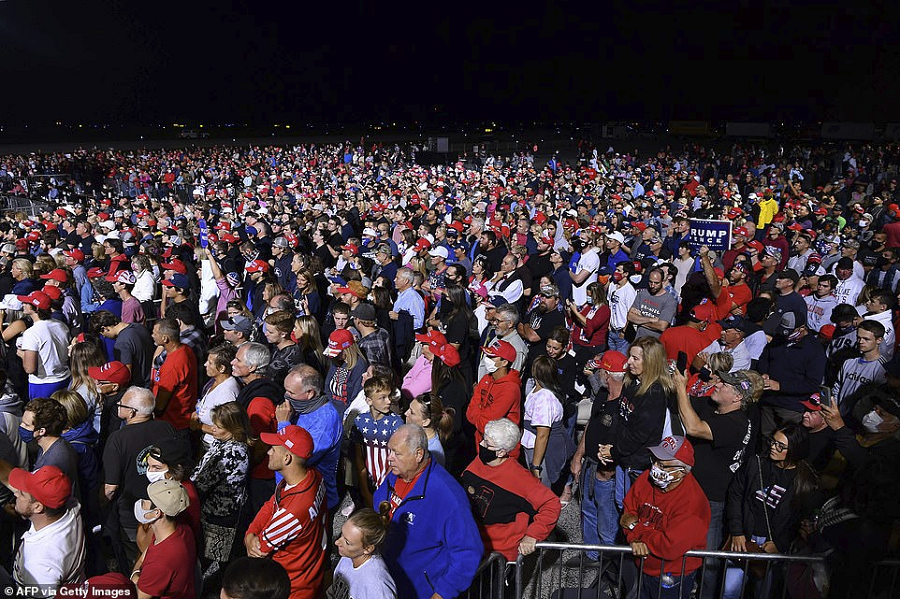 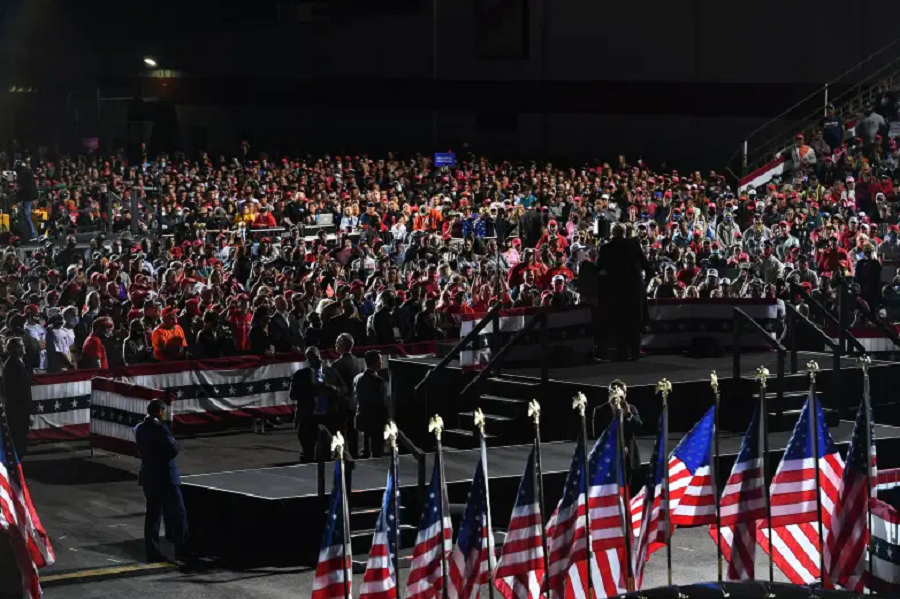 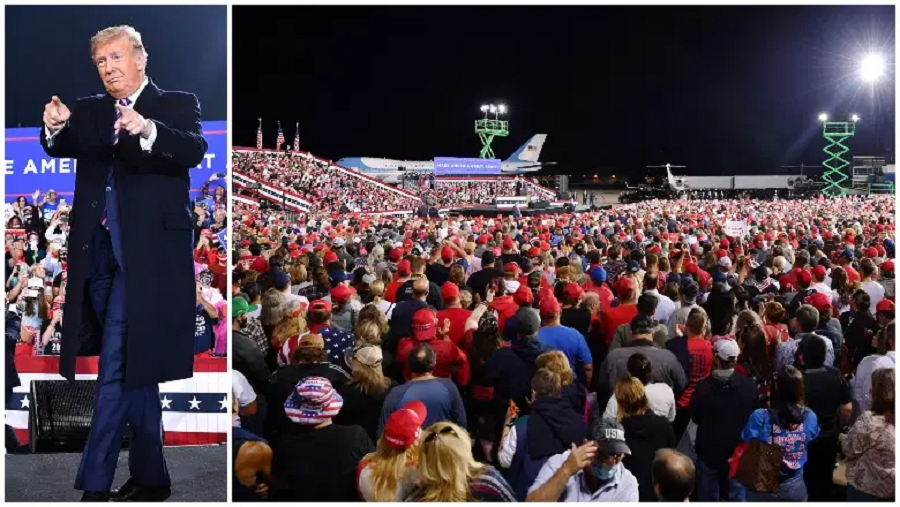 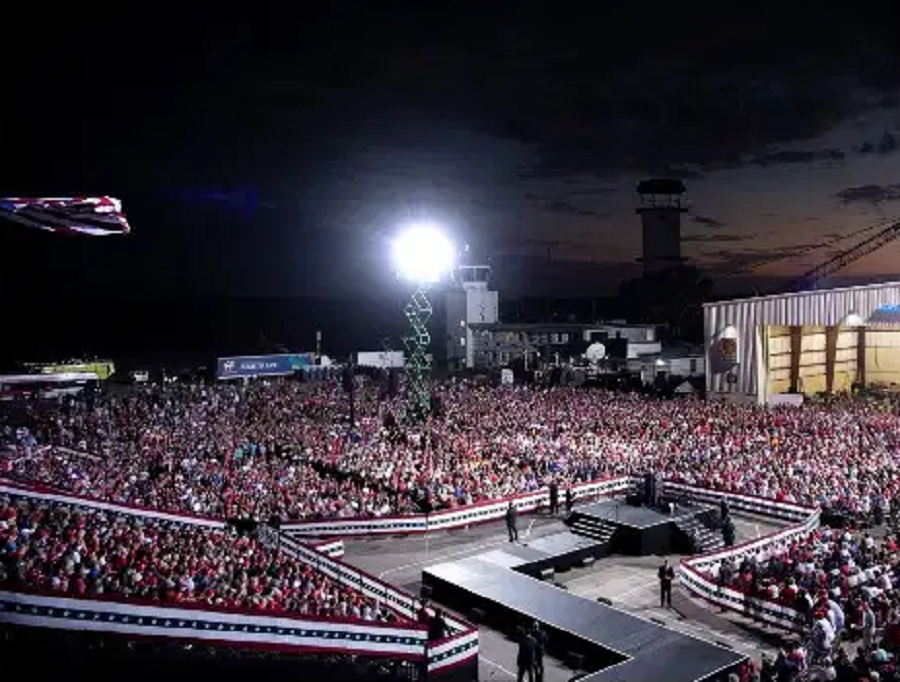 And tonight he’ll be at another in Newport News VA.  Who could possibly compete with this?  Certainly not Sleepy-Narenda-Burisma-Beijing-Dementia-Basement Joe.

And on top of all this, POTUS delivered an astounding address to the United Nations General Assembly, delivered from the White House on Tuesday (9/22).  There is simply no one who has the moral courage to say this to the world:

“We will distribute a vaccine, we will defeat the virus, we will end the pandemic, and we will enter a new era of unprecedented prosperity, cooperation, and peace.

As we pursue this bright future, we must hold accountable the nation which unleashed this plague onto the world: China.

In the earliest days of the virus, China locked down travel domestically while allowing flights to leave China and infect the world. China condemned my travel ban on their country, even as they cancelled domestic flights and locked citizens in their homes.

The Chinese government and the World Health Organization — which is virtually controlled by China — falsely declared that there was no evidence of human-to-human transmission. Later, they falsely said people without symptoms would not spread the disease.

The United Nations must hold China accountable for their actions.”

Here is the full White House text.  Below is the full video. It’s seven minutes, so easy to watch entire.  Be enthralled – and thank Providence for blessing America with this man.