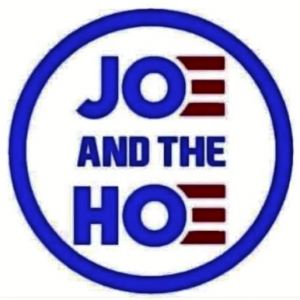 Might as well start off with the Official Harris-Biden 2020 campaign logo.

How impossibly ludicrous was the DNC Virtual Convention hardly anybody watched during the last four days?  Answer: last night, Biden was introduced by his son Hunter who praised his character and “honesty.”  Franz Kafka couldn’t have dreamed that up.

This corrupt senile clown is bought and paid for by Chicom China.  The DNC Convention was unmercifully panned as the “Summer Bummer,” “a snoozefest,” “unwatchable,” “insufferably boring,” by critics, and those were the kinder comments.

Of course, the Biden Gaffe Machine worked as expected.  When his elder-abusing wife delivers a syrupy plea for him, he comes in to embrace her and introduces himself: “Hi, everyone, I’m Joe Biden’s husband.”  Watch for yourself (at 35 seconds):

Last night (8/20) during his acceptance speech, he couldn’t read the teleprompter right and said: “There’s never been anything we’ve been able to accomplish when we’ve done it together.”

Okay, we’ve come to expect this from someone mentally defective, like when he told an audience a year ago (8/08/19) at the Iowa State Fair, “We choose truth over facts.”

So here’s the bottom line.  No energy.  No optimism.  Nothing but doom and gloom, whining and moaning about “darkness,” blaming every problem in America and the entire world on Trump, while offering no solutions whatever, just bromides, platitudes, and memorized commie-fascist slogans.  Not a word of criticism of BLM/Antifa burning Democrat cities down.  That’s it.

Which tells you one thing, when combined with the most ridiculous senile corrupt buffoon ever nominated for president by a major party in US history:  the Dems know the only way they can win in November is to cheat – and they are confidant of getting away with it.  Period.

Last Friday’s HFR (8/14) began: “The entire Woketard World is suddenly on Four Alarm Hair-on-Fire Alert this week over a fellow named DeJoy. Never heard of him?  You will.”

Wow, was that prescient.  So freaked out with fear that Postmaster General DeJoy would ruin their Cheat-by-Mail plan, Pelosi on Sunday (8/16) actually called back Congress out of recess to vote on a USPS cheat-by-mail bill.  She insisted DeJoy testify to Congress, getting him to promise no “tampering” with mail-in ballots.

Meanwhile, instantly, at least 20 Democrat states are now suing DeJoy and the USPS over changes they claim will sabotage mail-in voting – as reported this afternoon by Forbes (8/21).

The Dems get it – if they can’t cheat with this incredible main-in fraud, they lose, game over.  So they are in total panic desperation to save their scam.  Let’s be very clear how the scam works.

“Universal mail-in voting” is the sending out (using the Post Office) blank ballots to every address on record in a state, regardless of residential or commercial property, regardless of citizen or non-citizen, regardless of occupancy. Anyone can apply for extra ballots claiming a large group occupies the space. As in homeless shelters or drug rehabs. The ballots do not require witnesses or notarization to be acceptable.

As done in 2018 in California and other Dem states, unless the precinct leaders nullify improper ballots, any ballot with any name written on it can be counted without checking for a registration in good standing in the name of a legitimate citizen. No way to look over the shoulder of every vote counter for every ballot received. States using this practice have had to delay a certified, final count for weeks, even months.

Dems will rubber stamp the results, won’t let anyone audit, then say that there isn’t any evidence of fraud. All this because  while it’s safe to gather en masse to protest, it isn’t safe to vote in person – the virus, you see. 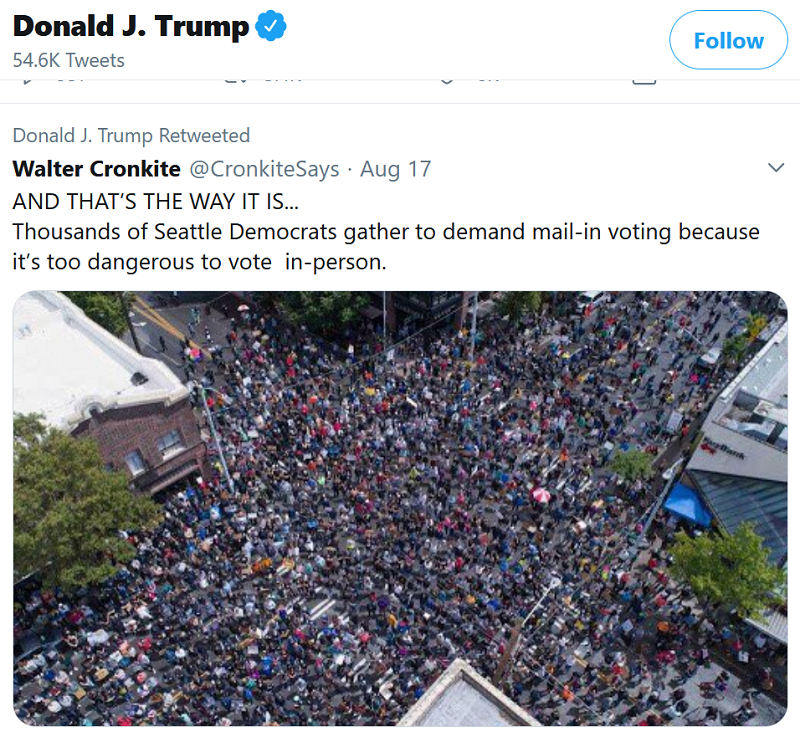 Now, despite DeJoy’s assurance that all of the mass ballots will be delivered, that’s doubtful in extreme.  There’s no way whatever these vast millions of mailed ballots can be zip-code or precinct sorted by hand.  Mail-sorting machines must be used.

USPS mail-sorting machines are huge with over 1,000 moving parts.  They are decades old, break down often, and there’s a serious shortage of repairmen who know how to fix them.

And that is fine with the Dems, as it allows them to claim “sabotage!” when this happens with so many voters “disenfranchised,” delegitimatizing not only Trump’s reelection, but the GOP maintaining the Senate and winning the House.

It is going to the anarchic chaos the Dems want.  For SCOTUS to rule to end it properly means the fate of America will depend on one single man – John Roberts – joining with the four good guys instead of the four bad. Place your bets.

What’s the solution?  Where’s the antidote?  Let’s go to Scranton, Pennsylvania – birthplace of Joe Biden and traditional Democrat stronghold – to find out.

Yesterday (8/20), just hours before Basement Biden was to deliver his virtual acceptance speech, President Trump traveled there for a campaign rally, held in a suburb of Scranton called Old Forge.  Here’s a video of his reception as his motorcade arrived.  You’re looking at solution:

That’s it in a nutshell.   In almost any non-rigged election, optimism wins over pessimism, happy wins over the soul poison of bottomless anger.  Further, only Dem states with one exception have universal mail-in voting:  California, Colorado, Hawaii, Oregon, Nevada, New Jersey, New York, Utah (the exception), Vermont, Washington, plus DC.

That doesn’t mean we’re home free.  Here’s the Wall Street Journal with the current (8/20) How to Vote by Mail in Every State. 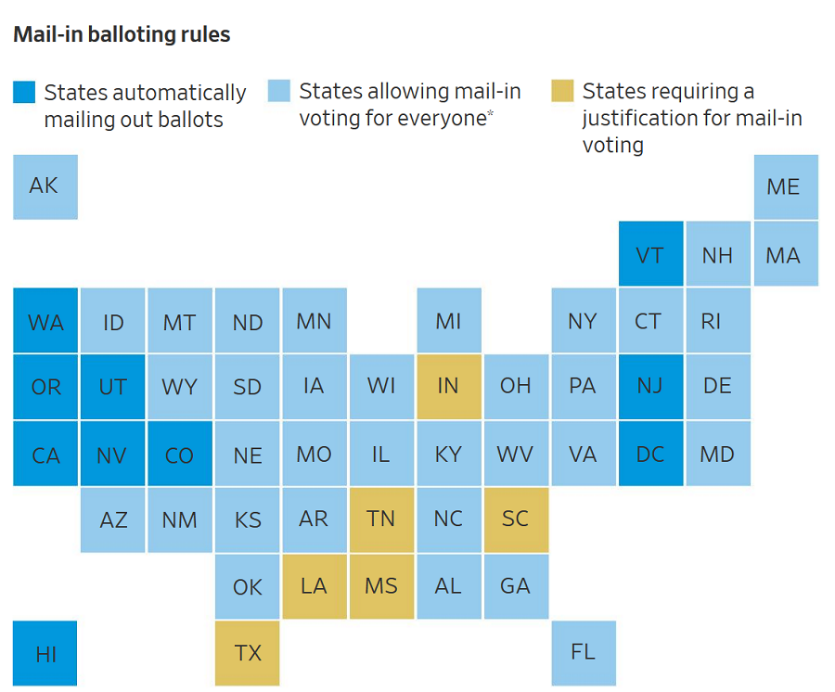 It’s in those light blue states where the election will be decided.  My personal bet is, optimism, positive excited energy will triumph.

This optimism is being reflected in the economy.  The WSJ headline this morning (8/21) is:  US Economic Recovery Gaining Steam.  Or this report: The Economic Recovery Looks Stronger Than Expected.  The markets reflect this: both NASDAQ and the S&P 500 are at record levels, while the Dow is back to nearing 28,000.  Everyone’s 401(k) is getting fatter again.

Dems will do everything to ruin the economy between now and Nov 3, with the main way to keep the riots and the China virus fear panic going.  They may succeed, but the odds are at some point a majority of Americans are going to realize without doubt that Democrats are not on their side and Trump is.

And that settles it.  Always remember, fear, hate and anger make you stupid – which is why we are smarter than them.  Put it this way:

And then a finale of our POTUS this morning (8/21) explaining that where Basement Biden sees American darkness, he – like you and I and a winning majority of millions of others – sees American greatness. 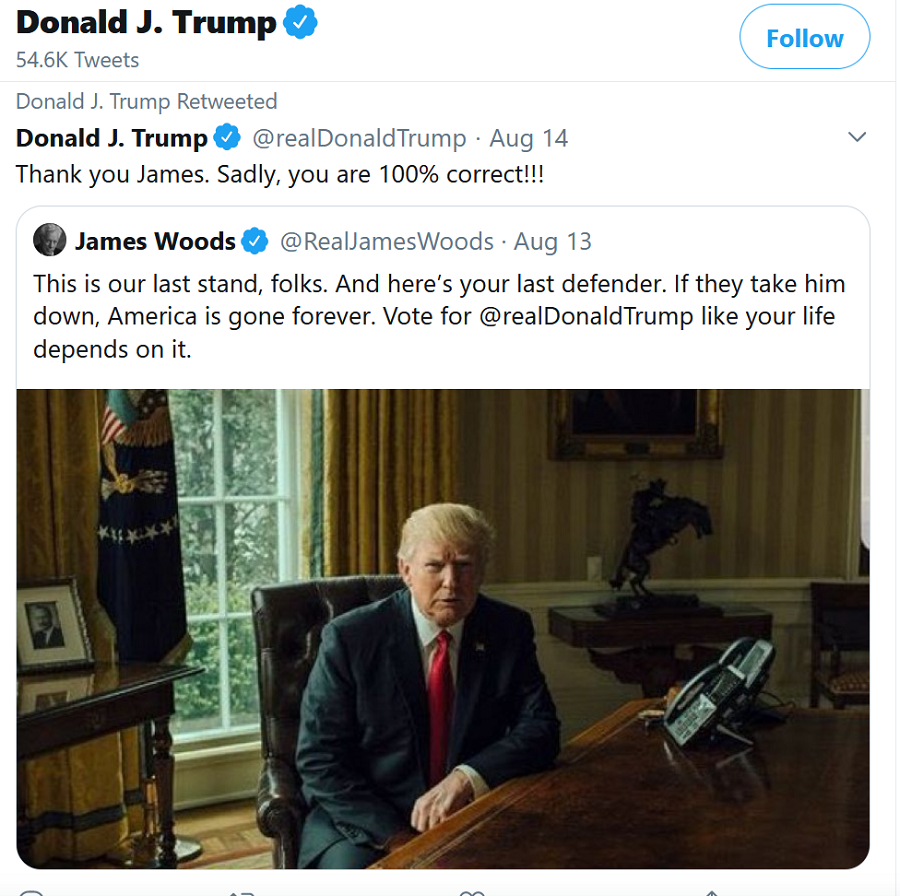