Yes, that is my son, former United States Marine Captain Brandon Wheeler on Fox News Tuesday (8/17).  In 2010, Brandon led his 2/6 Marines for seven months of daily combat in Marjah, Helmand Province, Afghanistan.  Marjah was Apache country when he arrived in June.  By December before he left, the Commanding General of US Forces in Afghanistan, David Petraeus, was able to walk down the streets of Marjah with Brandon safely.

Earlier this month (August 2021), under the auspices of the Freedom Research Foundation that I founded in 1984 and of which he is now Executive Director, Brandon spent two weeks in Kabul, and Mazar-e-Sharif in northern Afghanistan.  There was no awareness among all the officials and warlords he met of an immediate American abandonment of their country. 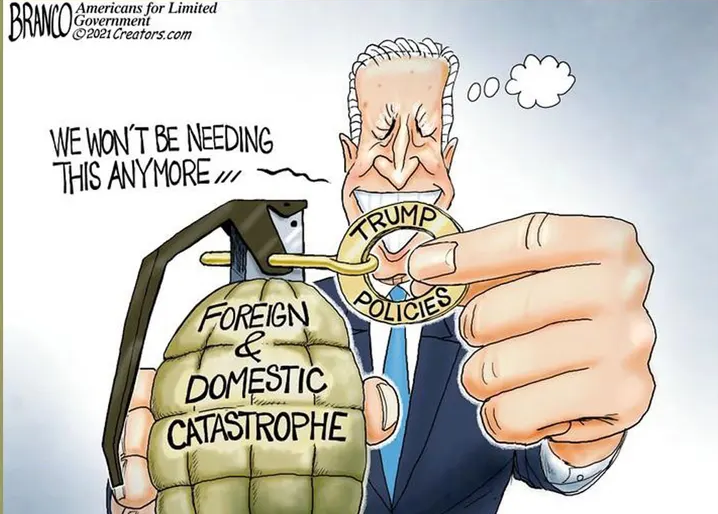 We must pray for the lives in dire danger from Taliban terrorism, American and Afghan – and we must plan on how to make the Democrats’ crisis as worse as possible, for this is a crisis we cannot afford to waste. 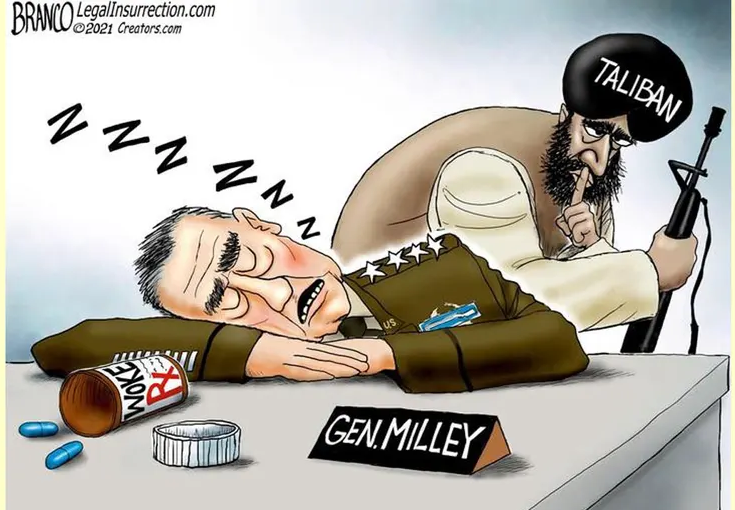 The Pentagon’s Chairman of Joint Chiefs, 4-star Gen. Mark Milley is going to be scapegoated to the moon by the Dems.  It’s a two-fer for them.  He’s despised as a total woketard by everyone on the right – and he was elevated to CJCS by President Trump so they get to blame him too.

Milley is already so rattled he’s making extremely stupid excuses, like saying (8/18), “There was nothing that I or anyone else saw that indicated a collapse of this army and this government in 11 days.”  What an airtight admission of blindness and incompetence.

Yet a premier requirement for getting to our military bureaucracy’s top tier is to be a CYA Master.  There is no question but that the Pentagon has had a well-thought out contingency plan for evacuating Americans out of Afghanistan, which would detail as always how civilians such as the many thousands of military contractors were to be evacuated before the troops.

Yet China Joe did the opposite – removed the troops first, allowing the instantaneous Taliban takeover, leaving 15,000 or more American civilians high and dry.  The NY Post this morning (8/20) says “Biden’s Saigon” is now “Biden’s Tehran” — 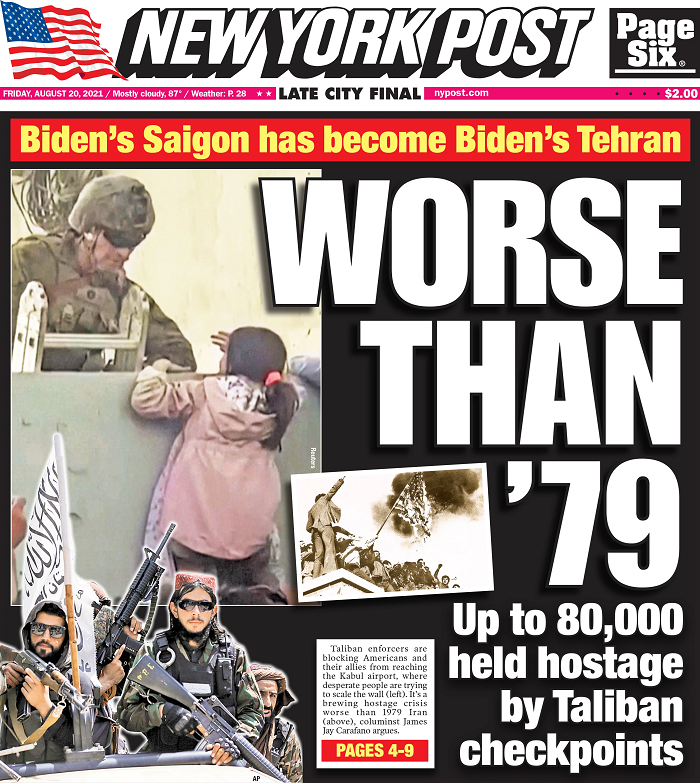 Yet the Tehran Mullahs had a little over 60 hostages, making “Biden’s Tehran” over a thousand times worse, adding in all the Afghans who worked for the US and are starting to be slaughtered as you read this, to the15,000 Americans.  Thus the Post cover story is: Call Afghanistan what it is: The worst hostage crisis in American history.

You can bet your bippy that Milley will strike back Dem scapegoating, fixing the blame on the real goat by releasing the official Pentagon Afghan Evacuation Contingency Plan and announcing that his Commander-in-Chief personally overruled it.

They won’t slink off silently taking one for the team, because the public at large – plus an increasing amount of the media – has lost it with President Dirtbag.  For it’s “Hidin’ Biden” who’s slinking away “on vacation” during the worst self-inflicted humiliation in US history that will soon be ever more disastrous.

As the Dems’ Saigon+Tehran goes squared on steroids, it will metastasize, causing exponential growth of all the other catastrophes they are causing: 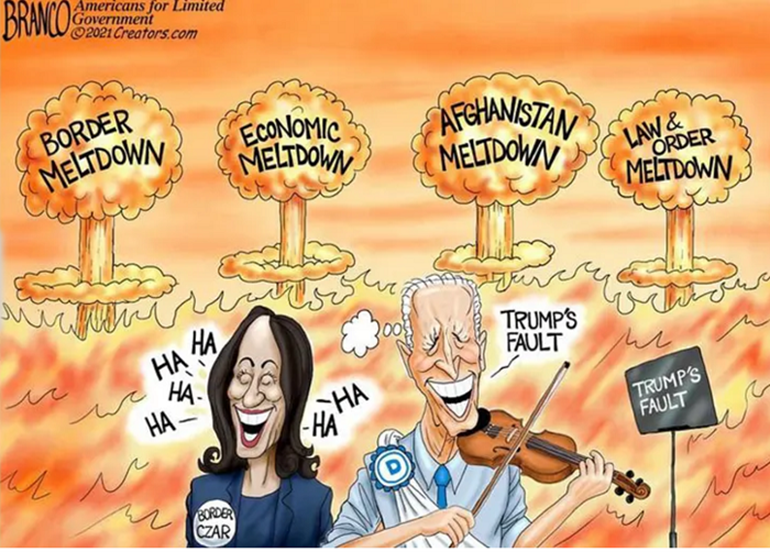 Look at the Afghan meltdown as catalyzing all the rest, resulting in stratospheric anger and opposition to the entire Xiden Regime.  With multiples of millions upon millions rejecting the regime’s legitimacy – and engaging in mass civil disobedience to its edicts – the collapse of Dem control of both ends of Pennsylvania Avenue becomes a possibility.

MTG (our standup gal in Congress) is 100% fed up, having no qualms over calling Xiden a POS.  Millions agree with her already – with many more millions soon to follow.  Click on the link but four-letter language alert:

Things are disintegrating for China Joe so quickly that it may become impossible for the Dems not to jettison him via the 25th Amendment:

Read the link if you want to get into the weeds here, but VP Heels Up only becomes president for real, not just Acting, if both the House and Senate subsequently vote to impeach and convict Xiden by two-thirds.  The whole process is a dog’s breakfast.

Please allow me to engage in a fantasy at this point.

The Pelosi House has a majority of only 5 seats: 220D-212R (with 3 vacancies, 2D-1R with 1D/1R election in Nov, the 2nd D next Jan), so currently a flip of five D seats to R and Pelosi’s out.  It’s not unreasonable to hypothesize five or more Dems quitting to “spend more time with their families” or switching D to R as they can’t stand Dem catastrophe anymore.

Should that happen, the new GOP majority gets to elect a new Speaker, per Article 1 Section 2:

“Clause 5: The House of Representatives shall choose their Speaker and other Officers; and shall have the sole Power of Impeachment.”

So far, this is plausible, perhaps even likely.  Here’s my fantasy.  There is no Constitutional requirement that the Speaker has to be a Member of Congress.  He or she can be anyone who meets the Clause 2 requirements: 25 years or older, a US citizen for at least seven years.  That means a House Majority is free to elect Donald J. Trump as Speaker of the House.

Immediately, all the Xiden Regime insanity comes to a halt.  House GOP investigations of Xiden-China corruption begin – and you can take it from there all the other possibilities for they are endless.  The Xiden-Harris Regime limps crippled and helpless to Nov ’22, solid GOP majorities in both House & Senate are sworn in Jan ’23 (many with Trump’s endorsement), the woketard-cancel culture influence is crushed, America begins to heal itself back to normal, and 45 is in the catbird seat for ’24.

Nice dream, yes?  Yet the bottom line remains:  the Dems are suffering a true catastrophe right now which is very likely to disastrously get worse, many House Dems are likely to bail as a result, and we really could have Pelosi out and a GOP majority in within the next few months.  That alone is a grievous blow to the woketard cancel culture CRT left.

That’s all about the House.  The Dems have a more immediate problem in the Senate.  A lot of DC pundits are saying there’s no way Xiden can be removed via the 25th, as with Heels Up no longer VP but “Acting” President, she can no longer preside over the Senate as the tie-breaker.  With the current 50D-50R Senate, it’s McConnell who calls the shots not Schumer.  The Dem agenda goes down the drain.

The magnitude of Xiden’s mendacity in Afghanistan – please read John Solomon’s Exclusive: Ex-Trump Aide Lays Out Afghan Withdrawal Plan That Biden Scrapped (8/20) for example – brings the question of who put him up to it, as the senile moron couldn’t have come up with this all by his lonesome.

The HFR’s bet is Xiden’s namesake – China’s Xi Jinping, who, let’s face it, owns him via covert videos of his corruption deals with son Hunter in Beijing.   Here are four immediate clues.  Reporter Julie Davis in Kabul:

And Xi’s ordering Xiden to emasculate America in Afghanistan gives a greenlight for his seizure of Taiwan: China Vows To ‘Crush’ Any US Troops On Taiwan ‘By Force’ And Conducts Live Fire Naval Exercises In South China Sea After Biden Abandoned Afghanistan (8/18).  Branco sums it up: 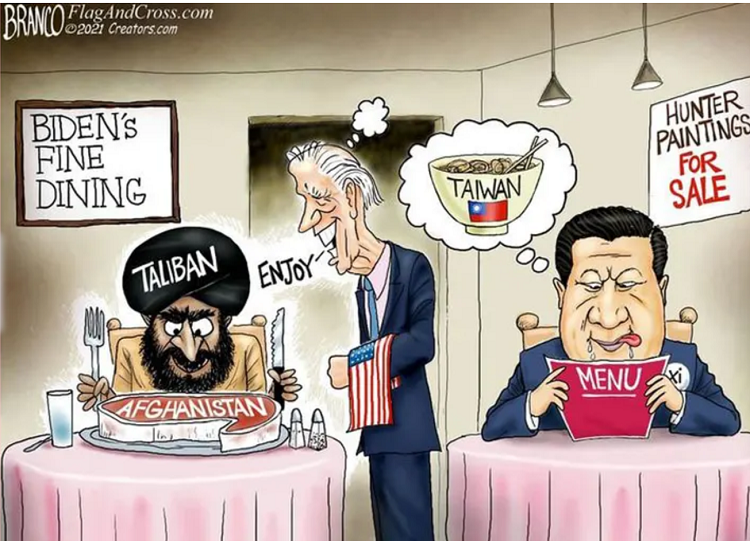 This is the latest chapter in Communist China’s undeclared War on America, starting with unleashing a bioengineered deadly virus upon us and the world and paying of US and world media to create a pandemic hoax over a flu bug and ruin Trump’s presidency.

Then paying off whomever necessary, including governors, to rig the November election with Dominion machines, to cheat their Xiden puppet into the presidency.

Then ordering him to ruin the US economy and the dollar with printed money to the moon inflation – and cause utter chaos with open borders flood of illegals by the millions.

Yes, the Dems are in a catastrophic collapse.  But so are we as an entire nation.  We still have time to come to the rescue of ourselves.  But we had better take advantage of the opportunity being handed to us right now while we can.

Please let me and your fellow TTPers know your thoughts on all this in the Forum.  Let’s get to closing with some fun.

In Skye’s Links yesterday (8/19), there was this — WATCH: Melee Breaks Out in California Between Antifa and Anti-Vaccine-Mandate Protesters – with Skye speculating on who paid the Antifa thugs to attack a peaceful anti-vax protest.

If you watch the video clips in the link, you’ll see that Antifa gets their butts kicked.  Funniest is this huge Antifa lardball in a pink shirt hitting like a girl and getting punched out in return.  Whoever paid these commie clowns lost their money. Enjoy!!

And I got this message from a TTPer in Oz who expressed exactly how I and so many of us really feel:

“I am currently locked in Australia unable to depart due to the criminal & fascist brain-dead political halfwits dictating what & how we citizens are expected to exist under their ever-changing scamdemic dictatorship. They need to be all arrested & executed for these crimes against humanity.”

About Brandon.  He gave two other interviews to a local station in San Diego this week:

You can see why his mother and I are so immensely proud of him.

Now for that story I promised.

Brandon – USMC Capt. Wheeler – befriended so many elders in the villages around Marjah, and gained such a reputation of how he commanded his Marines in battle with the Taliban, that he became known as “Commander Ibrahim” in the villages.

In one village he had never been to his reputation preceded him.  His Afghan interpreter introduced him to the elders as “Commander Ibrahim.”  The elders frowned.  Brandon is of normal height.  Standing next to him was a giant Marine, 6-foot-6, muscles like Arnold, and wearing just a tank top.  “No!” the elders cried, and pointed to the giant.  “He’s Commander Ibrahim! Commander Ibrahim is 7 feet tall!”

Everyone had the laugh of the day, and Brandon made another village full of friends of America.