Let’s talk about the Four Stages of Drunkenness.

Every drunk guy at a bar starts at the first stage by suddenly believing I’m handsome!  After another couple of drinks he’s convinced I’m rich!  More booze and he realizes I’m bulletproof!  The final fourth stage is the revelation I’m invisible!  After which others at the bar prove he isn’t by treating him to a knuckle sandwich.

Our Democrat political, social, business, and media elite are just like that guy – drunk at the bar of fascist power.  From Hiden’ Biden in his basement to blue state mayors and governors to Libtard celebrities in super-wealthy enclaves – they are sure of their invisibility to the BLM/Antifa terrorists they’re rooting for to destroy America.

Funny how sobering it is when their invisibility gets a knuckle sandwich of reality.  Seattle Mayor Jenny Durkan was pro-terrorists until they went after her own home.

So enjoy this delightful story of ereyesterday (8/05) from America’s worst-governed city: Crime Soars in NYC’s Wealthy Upper East Side as Democrats Move to Defund Police.

All the woketard billionaire sponsors of BLM, Antifa, and the Dem Party live in the Upper East Side, along with TV news airheads, editors of the New York Times, and brainless hostesses of chichi  dinner parties where all these folks gather to laugh at normal Americans.  What fun to watch the crime wave they’ve unleashed hit them where it counts.

Want another ROTFLMAO moment?  Please don’t be having a sip of coffee when you read what’s coming or you’ll make a mess.  On Monday (8/03), the New York Times ran this op-ed: Let’s Scrap the Presidential Debates  — in which the author assures us:

“This, by the way, isn’t written out of any concern that Donald Trump will prevail over Joe Biden in the debates; Mr. Biden has done just fine in a long string of such contests.”

The media fascisti are clamoring in unison with a demand that Dementia Joe refuse to debate Donaldus Magnus.  They’ll howl in denial but we all know the reason – they’re terrified that the American public will see just how senile Biden is.

The clamor is so loud now that it forces Biden into, not out of, the debates.  Beware, however, of how he’ll cheat.  Using covid as the all-purpose excuse, he’ll want to debate from his basement.  The moderators will feed him the questions in advance, answers prepared, which he’ll smoothly read off a hidden teleprompter.  A hi-def recorder would show his eyes moving back and forth as he reads.

Let’s hope POTUS prevails in getting the in-person mano-a-mano voters want to see.  The Biden campaign will do anything to avoid it.  This 74 seconds shows why:

Can’t resist another.  Here he is interviewed on Wednesday (8/05) where he asks if the reporter questioning him is a junkie (note: recall his son Hunter was kicked out of the Navy for being a crackhead) and he can’t even pronounce “mental fitness” at the end:

The Gaffe That Keeps on Giving went off the rails again yesterday (8/06), telling a NPR interviewer that “Unlike African-Americans, Latinos are incredibly diverse.”  Informing America’s blacks that they are unthinking robotic lemmings did not go over well, with POTUS and almost everyone else.

What happened to Joe Biden? pic.twitter.com/1Xn0yWnRCt

Now we’re going to talk about China – because it’s very important to understand that the Chicoms own Biden.  They suckered him into giving his cokehead son a $1.5 billion dollar deal while they were both in Beijing, and all the details are on hidden video.  Blackmail City.

They are (with the dates originally proposed to wage them in 2013):

In other words, continuous war upon China’s neighbors for the next 40 years.  Good example of Communist China being the single greatest threat to the world.

Events of this week make revisiting that Six Wars scenario necessary.  My friend Paul Goble, who authored “Will Siberia Secede From Russia” Wednesday, tells me that the Chicoms are setting up the seizure of all eastern Tajikistan – the region of Gorno-Badakhshan. 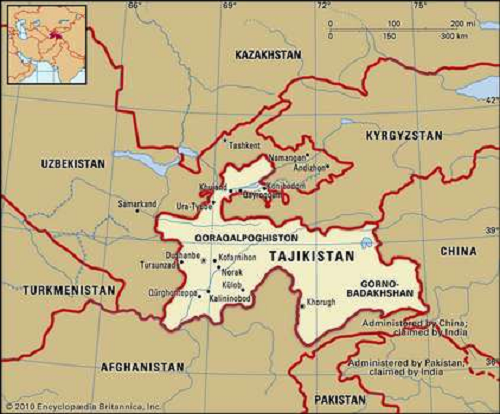 Comprising 45% of Tajikistan, the region has been known as “The Roof of the World” since Marco Polo traversed it 1273 – a high plateau studded with the Pamir Mountains 23,000 feet high.  In 2010, my traveling buddy Jerry Finn and I followed the entire region’s borders with Afghanistan and China, then up into Kyrgyzstan.

Paul tells me that official government press agencies are now publishing Chinese historian Cho Yao Lu, who says that the entire Pamir region belonged to China at one time and consequently Tajikistan should return it to Beijing.  Since Tajikistan is allied with Russia for protection against Chicom imperialism, the Russian press is issuing furious denouncements.

Meanwhile over at ZeroHedge, on Wednesday (8/05) there appeared: “China Will Soon Be Able To Close Off The Straits Of Hormuz And The Red Sea” 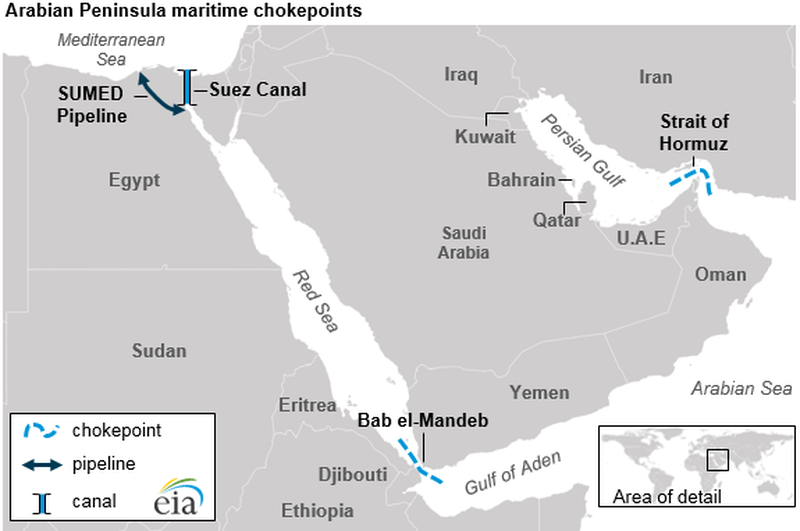 While Egypt controls Suez and Oman controls Hormuz – and the article makes no claim otherwise – the real problem is the Bab el Mandeb (Gates of Grief) southern entrance/exit of the Red Sea.  In 2017, China established its first overseas naval base in Djibouti right at the Gates.

Although it’s certainly evidence of Chicom meddling, Djibouti makes its living from its strategic position by leasing land and facilities for military bases to France, Japan, and the US.  CENTCOM has a major base there and could easily wipe out the Chicom contingent if necessary.

ZeroHedge doesn’t even mention this, pretending China has Djibouti all to itself.  So the claim of the article is false.  But for how long?  In an excellent article  in today’s UK Spectator (8/08 issue), British military historian Francis Pike discusses how “China Has Its Sights on the Bay of Bengal.”

This is an update on the Chicom “Necklace of Pearls” strategy to choke its number one (by far) Asian rival India to death or submission.  It includes the amazing buildup of the Chicom Navy compared to ours, and has a wealth of information about China’s manifold measures for influence over all of India’s neighbors.  A must geopolitical read.

In short, Communist China is our and the world’s greatest threat – nothing else comes remotely close.  And with Biden in the White House, America becomes China’s lapdog.

“The Obama-Biden administration was laughed at, they were a joke, and they were perfectly happy to let China win, your jobs disappear, and your factory to close.”

And that’s exactly what will happen again if…

…Evil triumphs in November.  The US Spectator on Monday (8/03) argues that we have Passed Peak Biden, and maybe so.  Not only is POTUS surging in real polls, manufacturing surging to a 15th month high, and the economy coming back alive with 1.8 millions jobs added in July and unemployment down to 10.2% with the Jobs Report released today (8/07).

Then there’s the Left starting to eat its own, targeting now BLM’s biggest supporters, Woke White Women.  Thought you were invisible, didn’t you, brainless ladies?

So here we go again.  The only hope the Dems have is to destroy the entire American electoral system with cheat-by-mail throwing it into irrecoverable chaos.

Their goal has shifted.  It’s no longer cheat-to-win, it’s cheat-to-chaos.  More chaos than you can imagine.  And the whole plot depends on blackmailing one single guy to be on their side.

The Constitution as amended requires the Electoral College vote for President/Vice-President 35 days after the election – that’s December 8 after November 3.  If they cannot reach a majority (270), it becomes a Contested Election with a majority vote of the House deciding the President and that of the Senate deciding Vice-President (out of the top three Electoral Vote recipients and no one else).

But those votes come on January 6, after a new House/Senate (the 117th Congress) is sworn in on January 3.  So here is the critical question at this point:  What if there are so many contested and undecided Congressional elections bombarded by countless lawsuits that it’s impossible to seat the 117th Congress to vote for the next President/Vice-President?

Then we have no President at all come January 20 when Donald Trump ceases to be President.  And no succession as there’s no Speaker, or Secretary of State and so on.

What could stop this before total chaos, force a majority vote of the Electoral College on December 8?  Only one man:  Chief Justice John Roberts.  With a Bush v. Gore level of importance, the vote will be reliably be 4-4: Alito, Gorsuch, Kavanaugh, and Thomas versus Breyer, Ginsburg, Kagan, and Sotomayor.  Roberts will be the deciding vote.  Will he vote for America or America’s doom?

I don’t know, but I wouldn’t bet anything of real value that he’ll do the right thing.

On Monday (8/03) at a White House press conference, President Trump stated he had the authority to issue an Executive Order banning mail-in voting.  He hasn’t done this, but you better pray he does so and very soon.

The fate of our country hangs in this balance.  Vice-President Pence put it this way in a speech in Tampa, Florida on Wednesday:

“The choice in November could not be more clear.  It is a choice for America or no America at all.”

Or as Michael Ramirez puts it, it all depends on whether or not the Dems will get away with this: 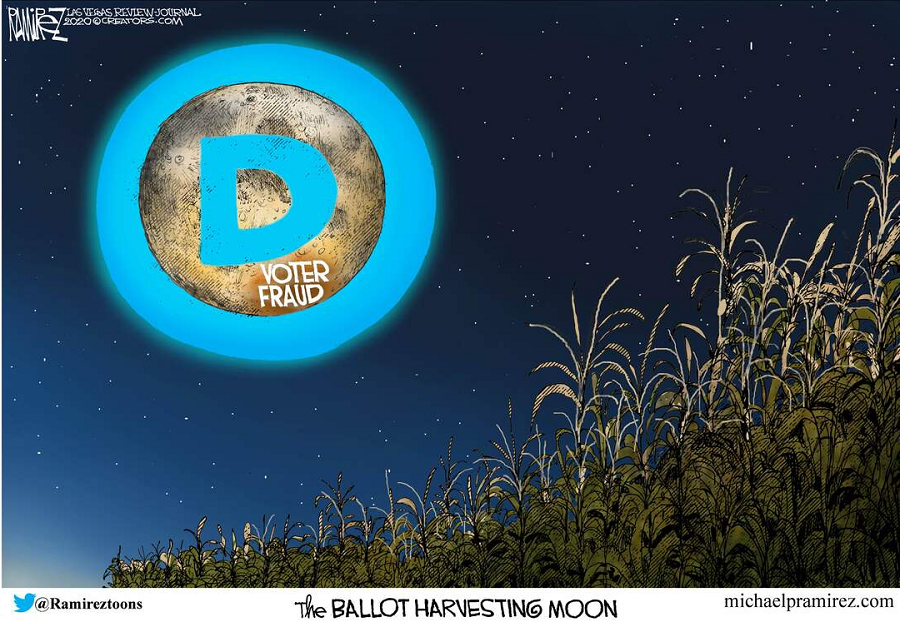