President Trump had a summit meeting with Russian President Vladimir Putin in Helsinki Monday (7/16). The two talked privately for 90 minutes, then held a joint news conference, which you can watch here. Or watch just the highlights here.

The president “stood on foreign soil next to a murderous lying thug and refused to back his own country,” said former FBI Director James Comey.

Trump “is aiding and abetting our arch adversary,” said James Clapper, Director of National Intelligence during the Obama administration.

If meeting with Soviet/Russian leaders, saying nice things about them during summits is treason, then every president from FDR onward committed it. 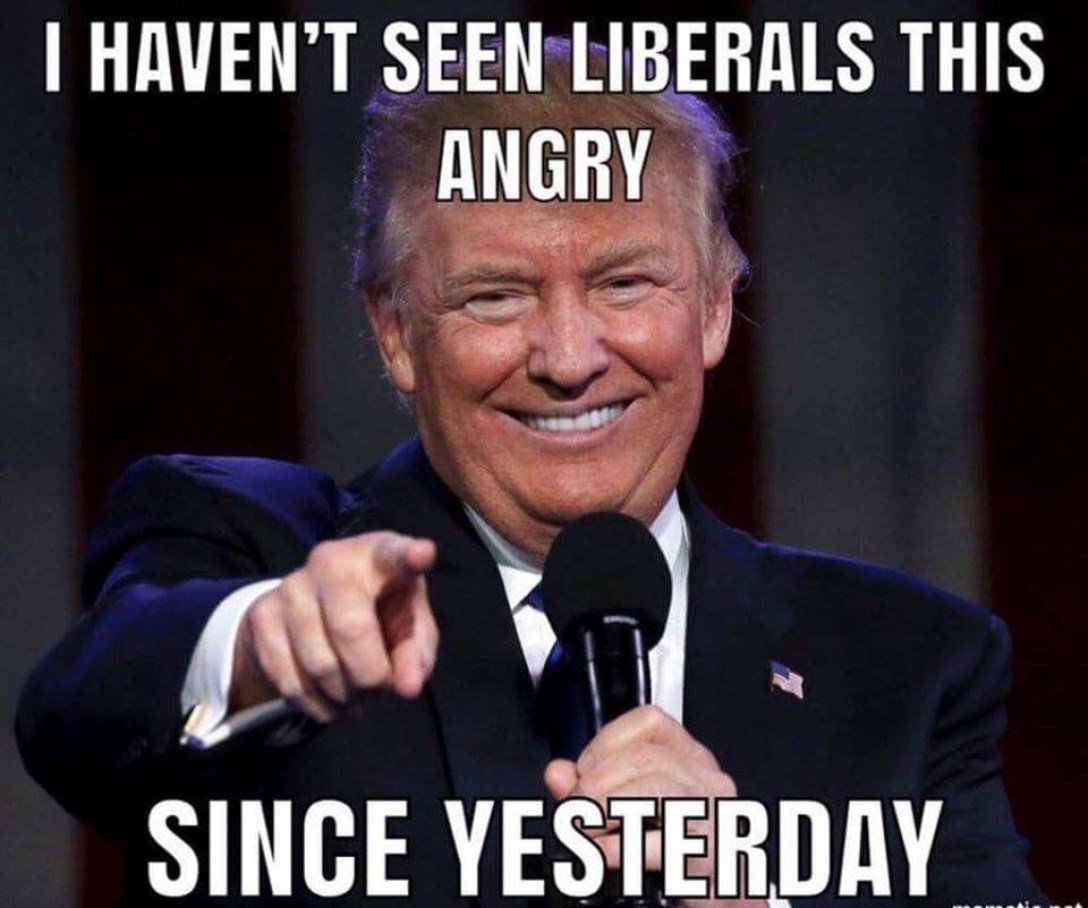 Here’s Hillary, talking about the importance of “resetting” relations with Russia back when she was secretary of state:

Will the Dems and Fake News ever learn? This is classic! pic.twitter.com/kSX3ROI4QG

************
Trump sought the summit to finalize a deal to end the civil war in Syria, I speculated in the HFR July 6. Putin also seems willing to abandon his support of the mullahs in Iran, and to help Trump free North Korea from Chinese influence.

The tell good deals are being made was the ear to ear grin on the face of Jon Huntsman, our ambassador to Russia, during his appearances on Fox News Sunday and Meet the Press the day before Trump and Putin met.

Our worthless elites are so busy virtue signaling to each other they pay no attention to what Trump is doing. For them, optics matter more than actions, words are more important than deeds.

************
Leftists accuse adversaries of what they themselves have done. Their prolific use of the T-word may soon come back to haunt Brennan, Comey, Clapper et al.

What Trump said in Helsinki isn’t treason. Conspiring with foreign powers to rig a presidential election and to frame a president very likely is.

Brennan made a secret trip to Moscow in March of 2016 to meet with officials of the FSB, which is what the KGB calls itself these days. Also that month Secretary of State John Kerry paid a visit to the Foreign Ministry in Moscow, John McCain made a visit to London.

What else was going on in March of 2016? Why that was the month Admiral Mike Rogers discovered FBI contractors were illegally rummaging through NSA intercepts, and shut them down.

They detect in the increasingly hysterical tweets of Brennan, Comey and Clapper the distinctive odor of flop sweat.

Brennan “knows his time is short before what he’s done is exposed and he is indicted,”  Shipp said. “I have every intention of helping make that happen.”

“Watching Brennan reveal how partisan (and guilty) he is is pure comic gold, Mikayes said. “He knows he’s circling the drain and only a matter of time before he’s gone.”

Here’s a chart illustrating Brennan’s central role in the effort to frame Trump: 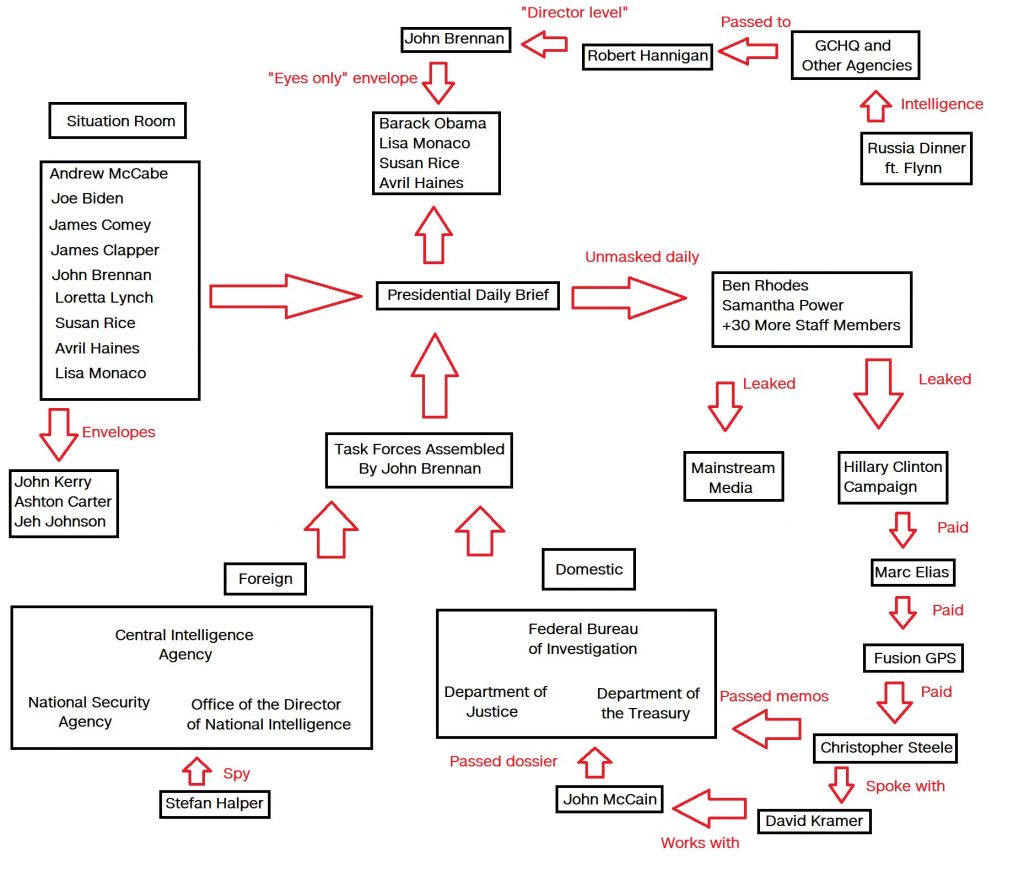 ************
Members of the cabal had another sphincter tightening moment this week when Republican lawmakers said Lisa Page has been a very cooperative witness.

Peter Strzok meant every word he said in his text messages to her about stopping Trump, Page said, according to Rep. John Ratliffe, R-Tex. That contradicts what Strzok said in his testimony last week.

Page confirmed that when Strzok texted “there’s no big there there,” he was referring to the Russia collusion narrative, reports John Solomon.

“The FBI agents who helped drive the Russia collusion narrative… apparently knew all along the evidence was going to lead to ‘nothing,’ and yet they proceeded because they thought there was still a possibility of impeachment,” Solomon said.

Page’s testimony “tends to confirm the suspicion that the Mueller probe is a cover-up operation to obscure the criminal use of counterintelligence capabilities to spy on a rival presidential campaign and then sabotage the presidency that resulted,” Thomas Lifson said.

************
The Special Counsel has offered Tony Podesta and four other potential witnesses immunity if they testify against Paul Manafort in his trial, slated to begin July 25.

But the optics are very bad.

“Team Mueller didn’t need Podesta to prosecute Manafort,” said Sundance. “But Team Mueller did need the prosecution of Manafort as an excuse to hand out immunity to Podesta.”

We should be angry about this, not alarmed. I suspect the president is giving Rat Bastard Mueller enough rope to hang himself.

************
Is Strzok an agent for Iran? Did the mullahs blackmail Obama? As is his wont, Thomas Wictor expresses certitude about what at this point is only a plausible theory.  But others have picked up on it, and it would make sense of Zero’s puzzling behavior, and John Kerry’s panicky reaction to a threat from the mullahs to reveal all about Western collaborators.

************
Many conservatives suspected Deputy Attorney General Rod Rosenstein announced Special Counsel Robert Mueller’s indictment of 12 GRU (Russian military intelligence) last Friday (7/13) to divert attention from FBI Agent Peter Strzok’s abysmal performance in a Congressional hearing the day before, or to embarrass the president on the eve of his summit meeting with Vladimir Putin.

Turns out President Trump asked Rosenstein to make the announcement on that day to increase his leverage with Putin. We don’t know as much about what’s going on as we think we do.

************
In this poll taken Monday and Tuesday, President Trump’s approval rating among blacks rose to 22 percent, among Hispanics to 38 percent.

Maybe blacks and Hispanics care more that the economy grew 4.5 percent in the 2nd quarter (April May June) than they do about the Russia collusion narrative. Jobless claims are the lowest since 1969.

In the Gallup Poll for July, the percentage of Americans who said relations with Russia is their most important concern was too small to represent with a number.

************
Watch “the future of the Democratic Party” as she reveals she knows absolutely nothing about the Middle East, her hate on Israel has no basis in fact.

Then watch here as Alexandria Ocasio-Cortez is unable to cite any examples of anywhere where her ideas have worked.

And here the Dems’ new superstar talks about occupying airports and ICE offices on behalf of illegal immigrants.

WOW. @Ocasio2018 recently stated that “unemployment is so low because everyone has two jobs”.

This is incomprehensibly stupid.

Her loud mouth and empty head pose a problem for Chuck Schumer.

“Octavio-Cortez is genuinely clueless,” writes David Catron. “Does she represent the future of the Democratic Party? I fervently hope so.”

************
In a heroic display of political courage, 133 House Democrats voted “present” Tuesday (7/17) on a resolution expressing support for “the officers and personnel” of Immigration and Customs Enforcement.

GOP leaders offered the resolution after three Democrats introduced a bill to abolish ICE. They initially planned to bring that bill to a vote, but offered the nonbinding resolution instead so Dems in swing districts wouldn’t have a chance to vote against abolishing ICE.

The resolution passed, 244-35, with 18 Dems voting for it, 34 against. One dirtbag Republican (Justin Amash of Michigan) also voted no.

************
The White House announced Thursday the president will nominate Steven Dillingham to be Director of the Census.

This is important because Trump wants a question about immigration status to be asked on the next census. If illegal immigrants are excluded, a half dozen or more House seats could shift from blue states to red in the next reapportionment.

************
Apparently even in dark blue New Jersey voters don’t like pols who take bribes and have sex with minors.

Dem Sen. Bob Menendez is in a statistical tie with his GOP opponent in this poll, despite the fact darn few people in the Garden State know who Bob Hugin is.

Typically, if an incumbent is below 45 percent before Labor Day (Menendez is at 43), he/she is toast.

According to Rasmussen, Trump’s popularity is as high as it was before the summit. Most Republicans think he did just fine in his meeting with Putin.

While the Left obsesses about optics and words, we deplorables care more about results.

“I’m supposed to change my opinion about a President that's doing all kinds of amazingly positive things because of a one-hour press conference?”

Supporters of President @realDonaldTrump in Michigan defend his performance in Helsinki alongside President Putin pic.twitter.com/qHajTTfL90

The White House is executing a brutally effective High Ground Persuasion Play, Scott Adams says. While Dems, NeverTrumpers and the Lying Swine stumble about in the weeds, expressing outrage about this word, debating the meaning of that word, the president is seizing the high ground on war and peace.

Trump said yesterday (7/19) he plans to invite Putin to come to the United States in October. If this visit takes place, you can be sure it will come after there is clear proof Putin has cooperated on something important, such as a cease fire in Syria.

The hyperbolic rhetoric of the Left will be exposed as empty… just in time for the midterms.