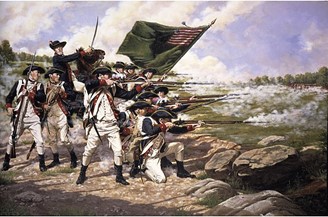 On July Ninth, 1776, 245 years ago today, General George Washington issued an executive order that The Declaration of Independence be read to members of the Continental Army gathered in Manhattan, while thousands of British troops on Staten Island prepared for the Battle of Long Island, which was fought on August 27th, 1776.

The Americans lost that battle. It was Washington’s greatest defeat and humiliation in his military career. He even almost lost his own life. However, he learned from that experience and reformulated his military strategy, and ultimately achieved a glorious victory for America in The War of American Independence on September Third, 1783.

The War of American Restoration was formally begun in 2016 with the election of Donald J. Trump as the 45th president (“Make American Great Again”). Yet, last winter, We the Sovereign lost the Battle of the 2020 Presidential Election. A historic landslide victory was fraudulently overturned with impunity by the transnational globalist leftist cabal united to defeat Trump by all means necessary.

The election was stolen, and today in the United States of America, we literally have a Kleptocracy, which etymologically means “rule by a class of thieves”.

Trump wrote in The Art of the Deal:

My philosophy has always been that if you ever catch someone stealing, you have to go after him very hard, even if it costs you ten times more than he stole. Stealing is the worst.

Trump is a man of action. He has been diligently applying his philosophy in going after the thieves of the ‘Great Theft’, working with key individuals around the nation who have initiated forensic investigations into the 2020 general election and 2021 primary. For example:

What will happen if the 2020 election audit proves that Trump actually won? Nobody knows. There is no precedence, nor is there any provision in the US Constitution or the Federal Law.  More details here:

What if the election audits show Trump really won?

The question people ask: Why did Trump not do all this while in the office? Why did he not prevent the election theft? Why did he not initiate an election reform? Why did he not send all those criminals and thieves to jail? The noted conservative scholar and author Angelo Codevilla writes about where Trump failed, what Trump should have done, and what post-Trump leadership should be and should do:

What Is Trump to Us?

How will you transform a criminal organization, a mafia, from within? You have managed to become the head of a mafia and you want to transform it so that the lives of the people in the city will be qualitatively better—more free, safe, and prosperous without the mafia’s extortions and interferences, but you have no choice but to work with the members of the mafia, 95% of whom are against you or even want to kill you.

We need both awakened leaders and awakened citizens, coherently working together, simultaneously nationally and locally, or ‘nationalocally’. That is to say, we need to revive the Federalism as originally conceived by the Framers but in the new 21st-century globalized technoscientific socio-cultural context.

We need to revitalize and reconstruct a process and structure for dynamically harmonious interactions and interchanges between centralized and decentralized, concentric and polycentric political, economic, and ideological power sources and centers. This is the time to re-study and re-examine The Federalist Papers with your children and the youth in your community:

Trump is simultaneously both a POTUS who never concedes to the result of the fraudulent election and a private citizen. He holds a unique power and influence which no one else in the nation or in the world has. By strategically using his unique power and influence, Trump has now turned offensive against his (and our) enemies with an expanding army of sovereign individuals.

The Trump rallies. The transformation of GOP through his endorsement. The forensic probes and audits of 2020 presidential election. His call for election reform. His “Trump Education Plan”, calling for the end of CRT, and for instituting a new American Civic Education, intended to educate the young minds with the philosophic and moral principles at the foundation of the United States. Trump’s class action lawsuit against Big Tech (see Skye’s Links). The list goes on. Here are some samples:

Enantiodromia is happening in the human world. The tyranny of the leftist globalist cabal has reached its extreme during the “pandemic” and then 2020 presidential election, and now the movement of human consciousness has reversed its course toward freedom and liberty. It is a Revolution (turning around) in human consciousness.

This is bad news for the Democrats, RINOs, DS, CCP, and the entire globalist elite power structure (CB, WEF, IMF, UN, WHO, et al.) The sign is everywhere. Some samples:

The House Select Committee to Criminalize and Obstruct

H.L. Mencken remarks in In Defense of Women:

The whole aim of practical politics is to keep the populace alarmed (and hence clamorous to be led to safety) by an endless series of hobgoblins, most of them imaginary.

The real brains behind the global tyranny are brilliant masters of deception. Just as master magicians do, they know how to use their sleight of hand by deviating and occupying your attention with appearances and apparitions.

What if “climate change”, “Covid pandemic”, “Russia”, “China”, “election fraud”, Epstein & McAfee suicide, CRT, etc. were all side shows—constantly moving and changing shinny objects with which to occupy the minds of the gullible, while the real agenda keeps moving toward its goal? What if the happening of the world that make headline news were mere “circuses” in what the Roman poet Juvenal (c. 100 AD) phrased “bread and circuses (panem et circenses)”.

What is their real objective? It is total global tyranny. It is power for the sake of power. It is control for the sake of control. Their real agenda is a transhumanist resetting of humanity and the world, which includes depopulation, dehumanization, and an AI/AGI supremacy over humanity.

We have experienced their dehumanization and depopulation agenda firsthand during the “pandemic” — quarantine & lockdown of asymptomatic people, social distancing, mask-qua-muzzle, murdering of the elderly and infirm. We must remember that for the globalist elite humankind is ‘humankine’ and we the common people are entirely disposable.

Now, in this complex world, all real problems are interconnected and therefore all real solutions are also interlinked. Discerning intelligence is required for differentiating real problems that exist in reality from false problems that are promoted and propagated by the media and exist only in “narrative reality”.

Also, complex thought is required to comprehend the whole in its internal interconnectivity and to make sense of the complex entangled web of problems in order to formulate a comprehensive integral solution and strategy for attaining the solution.

Does Trump and his inner circle have such strategy and solution? My working hypothesis is that he does. The challenge is to deceive the master deceivers and to win the information-narrative war which is the substance of the actual war now waged.

WHO Whistleblower Dr Stuckelberger on Gates and GAVI

MIT Scientist: Covid Vaccines May Cause Diseases in ’10 to 15 years’

The War of American Restoration is the latest war in the “Eternal War” between the “Responsibles” (the forces of good) and the “Resentfuls” (the forces of evil). Responsibles and Resentfuls are each comprised of a minority of the human population, forming a bipolar opposition, while the large majority comprises the “Adoptables” existing between the two.

Responsibles are motivated by love and sense of justice, Resentfuls by hatred and need for control, and Adoptables by fear and mimetic (learned/programmed) desire for recognition, reputation, and status. Adoptables are not capable of envy (a class of hatred) but jealousy, which is a greed for what one cannot possess, presently or permanently.

“Evil” is “Live” spelled backward, coincidentally, but symbolically expresses that it is the degenerative and devolutionary force. Evil never ceases to exist and it has now almost conquered the whole world.

Resentfuls have successfully put a large portion of Adoptables in a hypnotic trance so that they take a simulacrum of reality as actual reality, living in a collective dream wherein values are inverted, lies are believed as truth, tyranny is accepted as security, and becoming entrained in their metaphysical slumber and slumberous ignorance. Having long been victimized as a hostage, they cling to their misery and suffering that give them their identity and meaning.

Our TTP community is a community of the Responsibles. We each have a work cut out for him or her. What is required is courage. C. S. Lewis in The Screwtape Letters states: “Courage is not simply one of the virtues but the form of every virtue at the testing point, which means at the point of highest reality.”

Courage is neither the absence nor the opposite of fear. Courage is the alchemical virtue that transmutes the base emotion of fear to the sublime spirit of commitment. Courage alchemically transmutes fear into ego-transcending love. Courage implies the resolve, the commitment, that arises with the knowledge of a value greater than one’s mortal self. In courage (“encouraged”) we devote our life to that for which it is worth dying. Freedom and liberty are such a cause for which it is worth dying and therefore more than worth living.

The Combat Manual for Rational Conservatives

M. Stanton Evans (1934—2015), journalist, author, educator, was one of the unsung heroes of the modern conservative movement. Stephen Hayward of POWERLINE (www.powerlineblog.com) has completed a book on Evans entitled: M. Stanton Evans:  Conservative Wit, Apostle of Freedom. (The book is definitely worth reading. Personally I have placed a pre-order.)

In his introductory article, Hayward lists Evan’s Rules of Political Combat, which a friend characterizes as a conservative response to Saul Alinsky. Evans describes the left building up alarm about some asserted menace. They cite studies or science that the average person is unable to understand; trot out the activists/ politicians/officials who hammer the data; repeat this all in endless hearings.  When the public has its consciousness sufficiently raised, they quickly move to adopt the “solution” which always involves taxation/big spending/regulations.

In order to fight this, Evans proposes six rules:

There is simply too much news and information to cover and I have omitted 90% of the original including a large portion of my own draft. Here I shared with you thoughts and information focused on and pertinent to the theme of this HFR, which is the War of American Restoration and the Eternal War Thank you, Jack, for this honor.

In closing, here is a picture worth a thousand words (courtesy of Dan Scavino on Twitter) 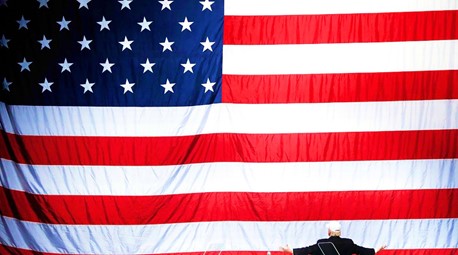