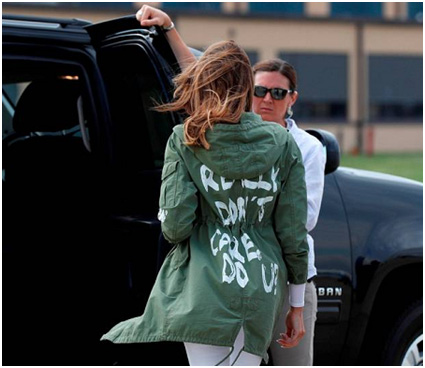 WOW… Who knew FLOTUS is a PR genius?  And the gutsiest.  She’s learned from the master, who happens to be POTUS.

Without saying a word, the world’s High Fashion Queen wore a $39 Zara jacket that annihilated, nuked, obliterated, tore to shreds, made mincemeat of every demented proto-hominid Trump-hating has-been celeb from Samantha Bee, Kathy Griffin, Peter Fonda, Robert DeNiro on down plus their Fake Newser megaphones.

Talk about shock and awe, a total wipeout firestorm meltdown in the Libtard Enemedia.  It hit them right between the eyes like a punch from Rocky Marciano, yet they were too brain-dead to get the message.  The number of headlines describing as “baffling” what Melania has done is uncountable.

Everything about this is no accident, comrades.  The cheap jacket instead of her usual haute couture coat costing thousands emphasized how cheap and worthless she regarded her and her husband’s hate-filled critics.

Wearing it on a solo visit to an illegal alien children’s shelter on the Tex-Mex border – the status of whom is the Fake News’ freakazoid hysteria of the moment – emphasized that, while of course she cares for children, she couldn’t care less about the phony manufactured Fake News crisis about them.

The words on the back, in white paint like graffiti on a wall, carried an ice-water bath of a message.  That of course she cares for her children like any mother – she called the Secret Police to go after Peter Fonda after he threatened Barron – the people spewing filth and lunacy mean nothing to her.

And so much more.  For the question, “Do U?” means they should mean nothing to you either.

There are many compendiums of famous put-downs and insults – but simple indifference, just not caring, is the worst insult of all.  A snippet of dialogue in Ayn Rand’s The Fountainhead is often cited.  The hero, Howard Roark, encounters Peter Keating who hates him, wants to destroy him, yet craves his approval.

Keating:  “What you do think of me, Howard?”

Another example.  You’re at a bar or cocktail party and you find yourself with a jerk who really doesn’t like the way you think.  You ask him, “Can I tell you a secret?”  They always say yes, so you respond, “What you think of me is none of my business.”

Yet Melania’s message has another target besides the Demented Left – us.  Exhibit A is Breitbart.  Constantly it’s running no-news articles about someone you never heard of or couldn’t care less about calling Trump some vulgarity.  There’s one today (6/22) about a rapper named Cardi B.

Who? Hey, Breitbart – Who cares?  The one and only purpose of such articles is to get us mad – mad enough to vote red in November.

Yet we shouldn’t get mad.  Instead, we shouldn’t care – and tell Breitbart to shut up and not care either. When Libtard proto-hominids do something for the sole purpose of outraging us, we have to not care – because caring by getting us upset is what they want.

When they do something violent, like incite or participate in violence, that’s time for direct action in defense.

And in case you’re wondering, yes, Melania’s message was for me personally.  I wrote Enough! in white heat yesterday.  I wish I had seen the back of her Zara coat before I did.

Regarding the Fake News phony crisis du jour, these sum it up: 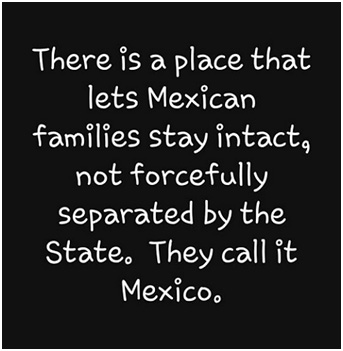 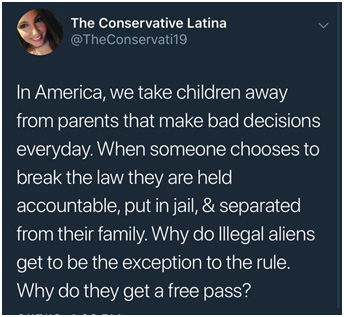 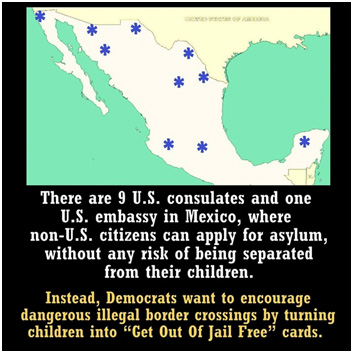 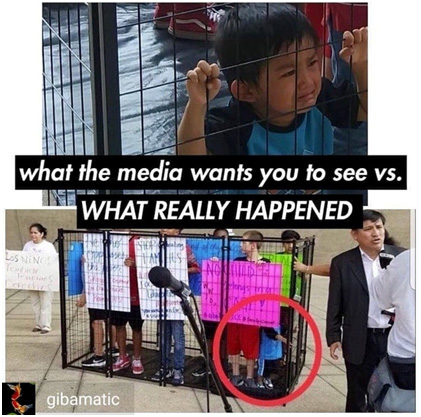 And this headline last night (6/21):  Rasmussen Poll: Majority of Americans Blame Illegal Immigrant Parents for Child Crisis on the Border.

Lastly, proof that Trump is winning:  Asylum-Seekers Are Hesitating At The Border, Fearing For Their Children (6/20). 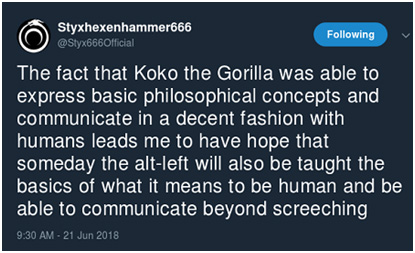 Meanwhile, in real news the Fake News wants you to be distracted from, evidence of Trump’s Triumph regarding North Korea keeps pouring in.

This last should earn PDJT the Nobel all by itself.  The real Nork threat, as opposed to nukes they haven’t got the missile for, is the thousands of artillery pieces dug in at the border aimed at the 17 million South Koreans in Greater Seoul a few miles away.  If this is accomplished, POTUS will have potentially saved millions of lives.

However, something never reported at the Trump-Kim Summit was another agreement between them.  You should know about it: 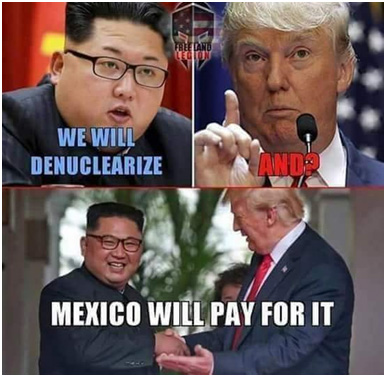 The article focuses on Interior and how happy Secretary Zinke is about restructuring and consolidating all the conflicting agencies under one streamlined operation.  Fox on the other hand focused here:

“President Trump’s administration unveiled a wide-ranging set of proposals Thursday (6/21) to boost government efficiency and accountability, including merging the Education and Labor Departments and privatizing the Postal Service (USPS).

‘The federal government is bloated, opaque, bureaucratic, and inefficient. President Trump understands the frustration felt by hard-working Americans,’ OMB Director Mick Mulvaney said, noting that many of the proposals could be carried out via executive action.”

To drain the swamp you have to shrink it.  This is just the start.

This is massive.  Federal agencies operate outside the Constitution with what’s called “administrative law” – meaning they get to make their own laws, criminally prosecute anyone they decide is breaking their laws, and be the judge who finds them guilty.

You may not believe that so please read it again.  It’s an unbelievable violation of any American’s basic rights.  Finally at last SCOTUS has ruled the SEC’s administrative judges’ very existence violates the Constitution.

Federal agencies have over 2,000 of these creatures pretending to be real judges in a real court of law (with no jury by the way).   Their jobs as Kangaroo Judges in Kangaroo Courts (with no hope of an actual trial until you’ve bankrupted yourself “exhausting your administrative remedies”) may now be in jeopardy.  Good riddance to them all.

You can’t beat this for a heartwarming story:  Elizabeth Warren “Lives Every Day in Terror” at Midterms Going Trump’s Way.

Well, it turned out yesterday (6/21) you can beat it: Elizabeth Warren’s Creation, the Consumer Financial Protection Bureau (CFPB), Ruled Unconstitutional by Federal Court.

“Judge Loretta Preska of the Southern District of New York ruled that the CFPB’s creation as an independent agency… was unconstitutional. She ruled that the entire section of the 2010 Dodd-Frank Act that established the CFPB should be stricken.”

This entire monstrosity can now be dismantled.  If the law creating the CFPB no longer exists, then obviously neither can the agency.  Pocahontas’ nightmares just got terribly worse.

This just in from the Winning on Steroids Department:  Canada, EU, and Germany Signal Compliance with Trump’s Trade Demands (6/21).

As the article wryly notes:  “This win needs to be sipped slowly for maximum enjoyment.”  You gotta read the whole thing.

And if you want a chaser, this today (6/22): OPEC Bows to Trump’s Demand for Cheaper Oil. Savor it:

Keep the fun going with Gateway’s The Hysterical Dithyramb – How Mueller’s Bumbling Special Counsel Team Is Getting Humiliated in Court (6/18).  You won’t believe what incompetent bozos Mueller has.  Enjoy.

One good consequence of the Horowitz IG Report is the exposure of the humungous corruption and dishonesty rampant in both the FBI and DOJ.  They are the Augean Stables of Washington – the analogy being one of Hercules’ Twelve Labors in which he diverted an entire river to wash out the stables’ incredible filth.

Let’s hope Trump is up to the Herculean task.  He could start with cleaning out Sessions, Rosenstein, and Wray – which is barely scratching the surface.

One fellow to help him do it is House Judiciary Member Mark Meadows (R-NC).  On Tuesday (6/19), he had the moxie to defy the demand of the FBI that “national security” required the impossibly biased yet unnamed FBI agents in the IG Report remain undisclosed.

Meadows, in a public hearing, revealed that “FBI Attorney 2” and “Agent 5” are Kevin Clinesmith and Sally Moyer.  They are corrupt and biased to the bone.  Note that Clinesmith was hired by Mueller.

But Mark remains on the warpath.  This morning (6/22) he tweeted: 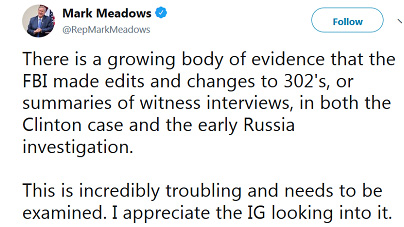 The corrupt and criminal collusion between the FBI and Mueller’s Witch Hunt is coming to light before our eyes.  The IG Report is thoroughly delegitimizing Mueller.  The sooner he realizes he’s got to fold his tent, the less he destroys what’s left of his career and reputation.

To me, the most astonishing thing about the Trump Presidency is not simply all that’s been accomplished – certainly more than any other president ever in his first two years in office (actually less, just 17 months).

It’s that President and First Lady Trump can maintain their composure and continue to stay focused on doing their best for their country surrounded by the most insane din of hatred any president and his wife have ever experienced.

On Tuesday (6/19), the President and First Lady hosted the King and Queen of Spain at the White House.  Here’s a press pool photo of them in the Oval Office. 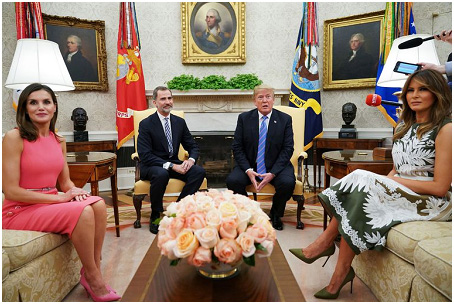 Note how calm and composed Melania is.  How is it possible for her to be like that when this is the reality? 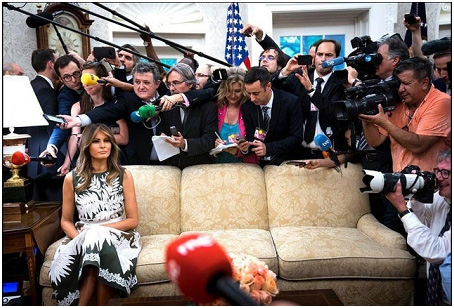 And this is what it is like for them every day – plus all the filthy deranged hatred.  Now is a good time to reflect that Donald is a self-made multi-billionaire.  He and Melania love each other, they could live the most luxuriant life together you can imagine.  They did not need this is any way.

Yet they do out of love for our country.  They are healing our country from all the wounds and tyranny inflicted upon it by Obama, the Corrupt Deep State, and the Fascist Left – and getting nothing but horrific filthy smears in return by them.

There is one thing above all we can do to demonstrate our gratitude – and that is to work as hard as we can to get out the Republican vote in November.  As POTUS tweeted today (6/22)” 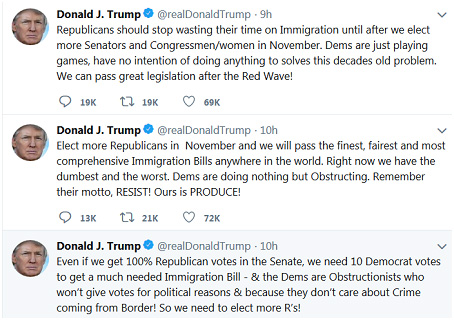 If we have a Red Wave in November – with a lot of the old Rino deadwood gone (including Ryan!) and replaced by real Trumpers – then the Left’s goose is cooked.

A lot of people feel that Providence had a hand in Trump’s election.  Yet you know who helps them who help themselves.  Now it’s up to us.  We are being handed a glorious future for America on a golden platter.  Not in our lifetimes will we have this opportunity again.  I ask that we all commit ourselves to help achieve the Red Wave.

And if you need any additional incentive, note that the man who will be elected President of Mexico in nine days (July 1), Andrés Manuel López Obrador, called today (6/22) for Mexico to flood the United States with illegal aliens.  Mass migration of illegals to the US is a “human right,” he shouted.

That’s just one of the stakes this November for our future.  Red Wave. Make it happen.