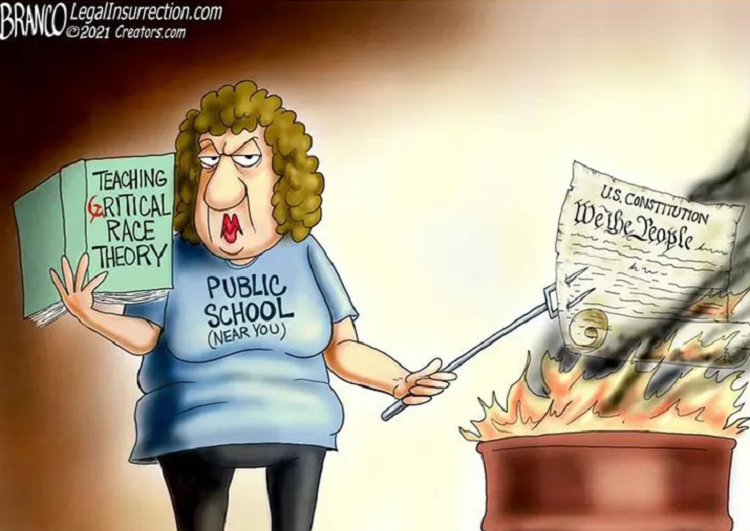 And Elite Private Schools Too

On today’s (6/11) TTP, Victor Davis Hanson plaintively asks when will “enough be enough” for there to be a public rebellion putting an end to the Commie-Fascist Woke madness engulfing our country.

Such a rebellion never starts across-the-board, but will always start over a specific issue, a concrete target in particular.  That’s what happened this week.  It’s been building for a while, but now we have liftoff.

On Wednesday (6/09), you read A Teacher Rebels Against An Elite School Ruining Her Students’ Minds, Dana Stangel-Plowe’s resignation letter in protest against her $52,000 annual tuition high school for going wacko-fascist with Critical Race Theory.

Instantly, she’s national news for being the hero she is.  The Daily Mail headlined:

She’s not alone.  Leesburg Virginia mother Xi Van Fleet, who was born and grew up in China during Mao’s Cultural Revolution, denounced her local school board for its Critical Race Theory doing the same thing to America’s and Communist China did to theirs:

“We are teaching our children to be social justice warriors and to loathe our country and our history. Growing up in China, all of this sounds very familiar. The Communist regime used the same critical theory to divide people. The only difference is that it used class instead of race. This is indeed the American version of the Chinese cultural revolution.”

Last night (6/10), she was interviewed on Hannity:

Next to go viral is Keisha King, a Black mom of two, who denounced her school board in Florida:

“Telling my child or any child that they are in a permanent oppressed status in America because they are Black is racist – and saying that White people are automatically above me, my children, or any child is racist as well. This is not something that we can stand for in our country.

Our ancestors – White, Black, and others – hung, bled, and died right alongside each other to push America towards that more perfect union. If this continues, we will look back and be responsible for the dismantling of the greatest country in the world by reverting to teaching hate and that race is a determining factor on where your destiny lies.”

This is where the rebellion against Commie-Fascist Wokeness catches fire across the entire country.  Next target coming in range?

That would be the Illegal Alien Invasion.  Yesterday (6/10): Gov. Abbott: Texas Will Build Its Own Wall.  The story is a must-read because this is a Big Deal.

Included in the governor’s directive is the order for Texas law enforcement to arrest illegals caught crossing the border for violating state law.  Meaning they will be incarcerated pending lengthy trial, meaning they can’t get any job to pay back the smuggler cartel that got them across.

And that means the cartels will shift their smuggling illegals to New Mexico and Arizona, forcing those states to build their own walls.

It also means that Texas is never going Blue.  The Dems can kiss that fantasy adios.  Texas Dems are now on the other side of the border fence from DC Dems – the only way any of the former are going to get reelected is to be against the latter.  If you’re a Texan, start buttering your popcorn.

Watch for the rebellion against the Illegal Alien Invasion to spread across the country because of this: llegal Aliens Are Being Flown to Cities Across the U.S. in the Dead of Night. How many of these cities are going to erupt in protest against local Dem pols, putting them in the same Catch-22 as those of Texas? 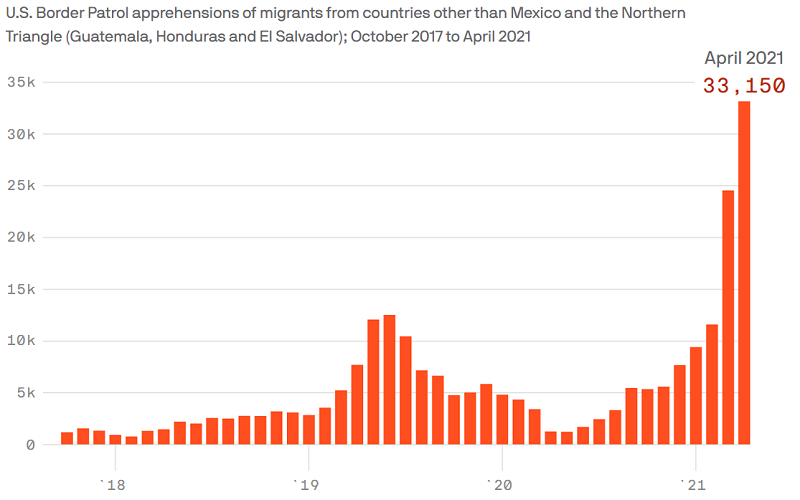 Data: US Customs and Border Protection

More than half a million illegals have been allowed into our country and spread throughout it with malice aforethought since this traitorous dirtbag has been fraudulently in our White House.  The rebellion against this is the next political wildfire to flash across America.

Want another wildfire?  Take a look at Georgia.  The Audit in Arizona’s Maricopa County, to be completed next week, is important no doubt – and hopefully it will spark similar audits by other GOP-controlled state legislatures that had their constitutional rights trashed last November, say in Wisconsin, Michigan, and Pennsylvania.

(An example:  The Nevada GOP, using the Arizona audit method, has found 122,000 potentially fraudulent votes for Xiden in a state he supposedly won by under 34,000.)

The difficulty in Arizona is the public being able to grasp intricacies of computer security, making it too easy for the Dems to confuse and bamboozle public opinion.  Not in Georgia, where as Skye linked to yesterday: Why A Judge Has Georgia Vote Fraud On His Mind: “Pristine” Biden Ballots That Looked Xerox’d.

This is something anyone, even an average grade-school kid, can understand:

*Tens of thousands of mail-in ballots counted for Biden, all shrink-wrapped on pallets housed in a warehouse in Atlanta.

*They were supposedly mailed in envelopes, yet they are all unfolded.

*A voter records their vote by filling in the blank oval with a pen: 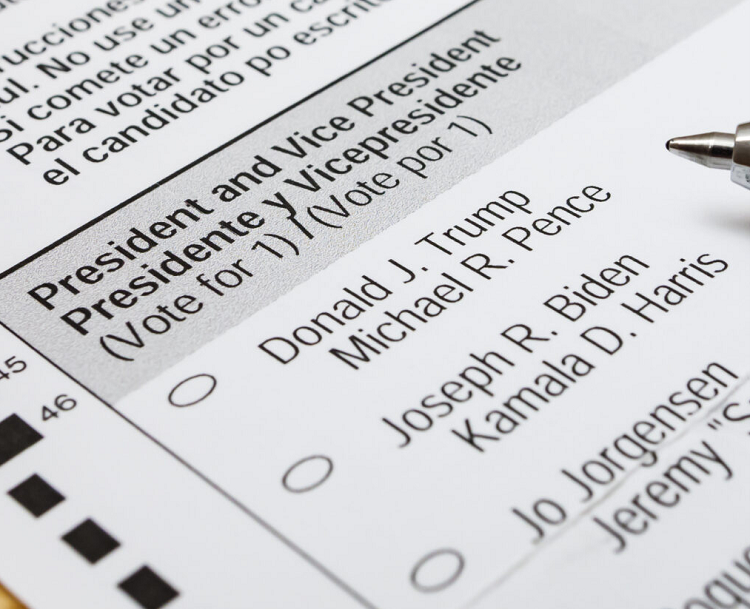 *In all of these tens of thousands of unfolded mail-in ballots, every oval is perfectly filled in for Biden exactly the same, except for the exact same unfilled small white spot. As the judge says, they all look “xeroxed” from one ballot, all on copy paper different from the kind of paper used in real main-in Georgia ballots.

Anyone can get this is undeniable 100% pure voter fraud. Note that of the almost 5 million votes cast for Trump and Xiden, the latter supposedly won by less than 12,000.

A Democrat judge has ordered an investigation.  Dems will be desperate to cover this up, but if they fail to do so, this is what will render the Biden-Harris administration totally illegitimate in the public eye, making it impossible for Dems to keep the House & Senate next year, or the White House two years after that..

All of the above is really just for openers on what a horrible week the Dems have had.  On Tuesday (6/08) in TTP, you read Senator Joe Manchin’s Why I’m Voting Against Hr1 The “For The People Act”.

To say the Dems have gone around the bend since is… well, Nicole Wallace on MSNBC declared (correctly) that Manchin’s no vote “is an official death sentence for the Biden agenda.”  Democrat Congresscritter James Clyburn, the House Majority Whip, compared Manchin’s decision to the fall of Rome.

Let’s hope they are both right – for we know that Clyburn was comparing the fall of Rome to the fall of the Democrat Party.

On her first foreign excursion as Fake VP, Heels Up was greeted in Guatemala with these welcome banners: 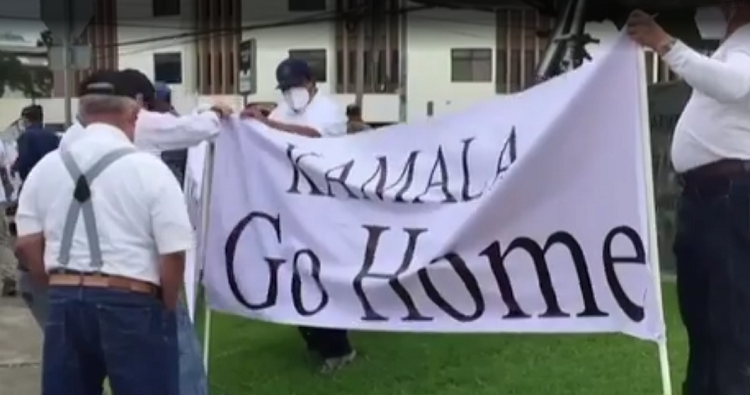 Guatemalan President Alejandro Giammattei bluntly told her that her country’s border crisis was entirely her government’s fault, not that of its predecessor.

From Guatemala she went to Mexico, meeting with its President Lopez Obrador – which went sideways as well.  All in all, The Hill (newspaper of Capitol Hill in DC) quoted a number of White House people describing her foreign escapade as “a disaster,” “cringeworthy,” and “terrible.”   You asked for this, lady.

In the light of these debacles, Florida Senator Marco Rubio on Monday (6/07) observed that the Shift in Hispanic Vote Toward GOP Under Trump ‘Permanent’ Unless Republicans Revert to Pre-Trump Ways.

Namely, that the “common sense wisdom and working class values” possessed by Hispanic voters were championed by Trump and have been abandoned by the Dems.  RINOs and Never-Trumpers beware, warns Marco.  Good advice.

This awful week for Dems included this on Monday (6/07): 9-0 Supreme Court Rejects Liz Warren’s Subversion of Immigration Law.  Yes, unanimously SCOTUS ruled that an illegal alien has no right to a green card.  Another major obstacle in the Dem plot to allow illegals to vote.

It’s also another 9-0 warning shot to Dems – don’t even think anymore about packing our Court because we are united in ruling against it.

Then there is this word introduced into our vocabulary this week: Shrinkflation.

“Consumers are paying more for a growing range of household staples in ways that don’t show up on receipts — thinner rolls, lighter bags, smaller cans — as companies look to offset rising labor and materials costs without scaring off customers.  It’s a form of retail camouflage known as ‘shrinkflation,’ and economists and consumer advocates who track packaging expect it to become more pronounced as inflation ratchets up, taking hold of such everyday items such as paper towels, potato chips and diapers.”

Yet even with that, as Zero Hedge reports today (6/11): Real Inflation Is Now In The Double Digits And Pain Is Coming.  This is a must-read for how the government’s CPI is rigged to report inflation much lower than it’s experienced when you go shopping.

Bottom line to this and everything in this HFR: Events are moving fast now, and will continue to move faster and faster in coming months in directions exceedingly detrimental to the future of Democrat politicians seeking reelection and that of the Democrat Party itself.

Next Wednesday (6/16), Zhou Xiden will meet with Vladimir Putin in Russia.  The Real POTUS issued this statement regarding it – please note the Master Troll stiletto in the ribs at the end. 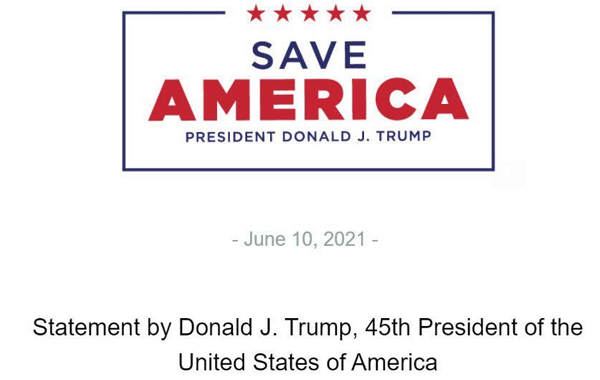 We close with something that will make you cry.

On Wednesday evening (6/09) at the Nassau Coliseum in New York, 13,917 hockey fans assembled to watch game 6 of the NHL Stanley Cup playoffs, the New York Islanders vs. the Boston Bruins.  Before the start, songwriter-singer Nicole Raviv sang our national anthem.

Watch what happens – and note there’s not a mask in sight.  This glorious moment is the real America, our America that will triumph over all one day soon to come.