Welcome to the Bogart In The White House HFR.

POTUS in Nashville, Tuesday May 29

POTUS is committed to building a 1,000 mile-long Wall to protect our border with Mexico from invasion by illegals, terrorists, and animal drug gangs.  If there’s one thing he knows, its construction – and if there’s one thing the Israelis know to build is a virtually impenetrable wall that does that quickly and cheaply.

As reported by the Mexican press with figures from the Bank of Mexico, remittances by Mexicans in the US back to Mexico were over $28 billion in 2017 alone.  Fourteen times the cost of the Wall in one single year.

A 10% tax on these remittances would quickly pay for the Wall, which Mexico would enjoy paying with the alternative being shutting off all remittances entirely. 20% even quicker.  90% even 80% of a loaf is a lot better than no loaf at all.  That’s the Trump-Bogart way.

Time for the Trump Lesson of the Week – perhaps of the entire Trump Presidency, all 8 years of it.  It takes Nicky Parsons in The Bourne Supremacy a few seconds to describe Donald Trump to a T:

“The objectives always came from us. Whose giving them to him now?” the Deep State Establishment and Global Elite asks.  “Scary version?” Nicky replies.  “He is.”

Trump doesn’t do random.  There’s always an objective, always a target.  And the Deep Staters, Fake Newsers, Dem libtards are too scared to get it, so all they do is rant and rail, whether it’s tweets threatening North Korea – that somehow produce actual real peace talks – or, the current freak out of the moment, tariffs on Mexico, Canada, and the EU – just wait to see how they produce far fairer trade deals for the US.

Funny isn’t it that they never heeded the wisdom of their éminence grise on presidential foreign affairs.  Shortly after the November ’16 election, he observed on CBS’ Face the Nation:

To this day, they can’t handle the truth of what Henry Kissinger said back then:

Not being able to cope with the Reality of Trump literally renders his critics retarded.  Calling them libtards is an objectively accurate description.  Take their demented meltdown over Roseanne tweeting that ValJar was like “the Muslim Brotherhood and Planet of the Apes had a baby.”

Brilliant.  Now a spotlight seen by millions is shining on this evil woman known as “The Obama Whisperer” – and know she is a Pro-Iran Moslem, a radical Hate America friend of Communist terrorist Bill Ayers, the product of Chicago political gangsters, and the brains (such as they are) behind Obama – who lives with him and Michelle in their Kalorama mansion in DC.

And it gets better.  A huge spotlight now shines on all the demented hate speech towards Trump – and his family – by genuine nutcases like Keith Olberman, Stephen Colbert, Jimmy Kimmel, Joy Reid and so many others, the latest being a talentless frump named Samantha Bee.

So much so that CNN anchor Brooke Baldwin was so disgusted she said this – on CNN! – live last night (5/31) on Olberman and Bee:

Meanwhile, while it’s supposedly uncouth to compare ValJar with Kira…

No doubt you can see the resemblance here with Colin K… 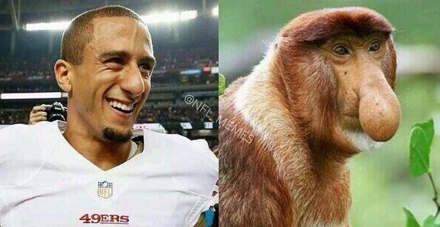 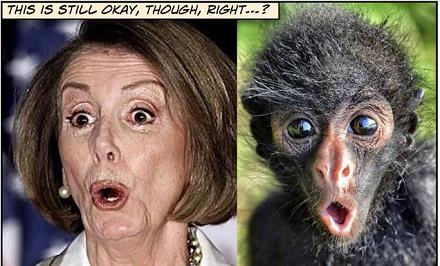 What really fries Trump-Hating Libtards’ stunted brains the most, however, is not what they criticize him for – it’s that he’s right, he is in fact WINNING! just about everywhere.

And to run this follow up front page story: We Ran Out of Words to Describe How Good the Jobs Numbers Are:

The economy is in a sweet spot, with steady growth and broad improvement in the labor market.

And for CNN to run this: Black Unemployment Rate Hits a Record Low.  And to report:

That’s winning in spades and no pun intended. There’s no vote more important to Dems than the black vote – and they are losing more of it every day.  Just look at this black student at Stanford University being interviewed by Candace Owens proclaiming on Wednesday (5/30), “I’m off the plantation, bro!”

Which brings us to an Armenian woman married to a black guy with 27 million twitter followers, and who herself has a twitter following of 60 million herself.  Here’s a picture of her yesterday (5/31): 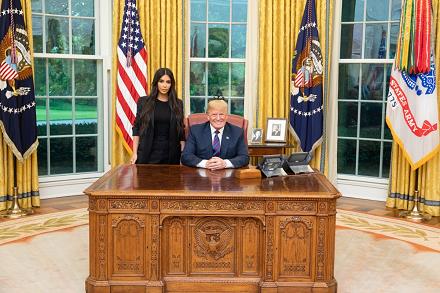 Yes, that’s Kim Kardashian, wife of Kanye West, meeting the President to request a pardon for an elderly black lady, Alice Marie Johnson, who turned 63 ereyesterday (May 30), and has been in federal prison for 21 years serving a life sentence without parole for a first-time non-violent drug offense.  Here is Kim interviewed after:

Alice will be pardoned, count on that – which opens the door to wholesale prison reform regarding all the blacks incarcerated for minor non-violent drug offenses.  That, plus massively increasing black employment (with real jobs not government pretend jobs) is a double whammy the Dem lock on the black vote can’t withstand.

Speaking of non-randomness,  let’s talk about the POTUS pardon of Dinesh D’Sousa yesterday (5/31).  As White House Press Secretary Sarah Sanders explained, “Mr. D’Souza was, in the President’s opinion, a victim of selective prosecution for violations of campaign finance laws.”

Right… selective prosecution of a conservative author and filmmaker by Obama.  Of course, all of Fake Newsdom went into crybaby meltdown mode – but what really drove them into Panic City was his telling them he was also considering pardoning Martha Stewart and Rod Blagojevich.

Oh, oh, trouble in River City.  A Martha Stewart pardon is a warning to Mueller, forget about perjury trap process crimes, schmuck.  But a Blago pardon is far more dangerous.

Blago was imprisoned as sitting Governor of Illinois in 2009 in order to keep him from revealing Obama’s deep connections to Chicago’s criminal gangsters such as Tony Rezko.  There isn’t anyone in the Obammunist Inner Circle, from Rahm Emmanuel to Ben Rhodes to ValJar, who doesn’t think a deal has been made between Trump and Blago to sing like a canary after his pardon and release.

Sure hope his pardon comes very quickly now before Blago finds himself suicided in his cell.

Here’s the Cartoon of the Week.  Nice touch with the MAGA hat starfish: 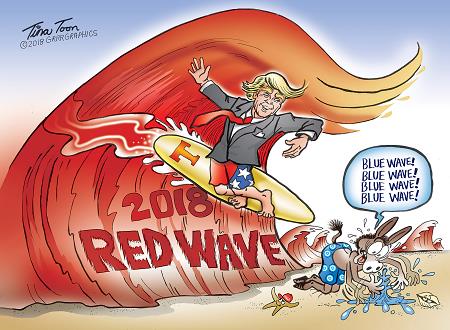 And the political ad of the week.  It’s confirming evidence that, as toad-brain Rino John Boehner lamented yesterday (5/31), the Republican Party is now the Trump Party.

This is an official RNC (Republican National Committee) 60-second campaign ad attacking Pelosicrats with the Democrat Mid-Term Message:  MS-13 Killers, They Aren’t So Bad.  Devastating.  And nothing is random.

You’ve seen the Big News of the Day:  Trump-Kim Singapore Summit Is Back On.  There’s no competing with Trump – the guy is a political and geopolitical strategic genius – and a marketing-PR genius at drama and timing to boot.  It’s not like he’s playing the Fake News and the Deep State and the Dems and Mueller like a Strad – he’s playing the whole furshlugginer world.

Thus TTP’s prediction still stands:  That during the first week of October, in an Ultimate October Surprise 30 days before the mid-terms, the Norwegian Nobel Committee will announce that President of the United States Donald J. Trump will have won the Nobel Peace Prize, along with North Korea Supreme Leader Kim Jong-Un, President of South Korea Moon Jae-In, and President of China Xi Jinping.

Should this happen – and if the June 12 Summit is successful and holds it will be a virtual necessity – that cartoon you see above becomes reality.

By contrast, what in Hades is wrong with Ireland?  So much for the Irish claim they’re Catholic.  On Saturday (5/26), Irish Voters Said Yes to Abortion.  What’s more, unbelievably disgustingly so, is the huge crowds ecstatically celebrating it’s now legal in Ireland for a woman to murder her own children: 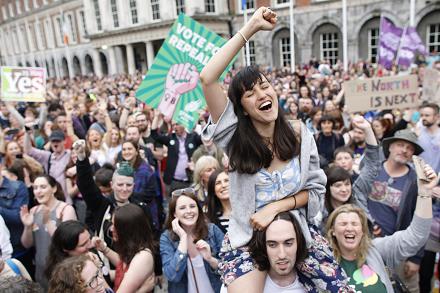 So much for the Irish claim they’re a morally decent people.  As one headline puts it, St. Patrick Weeps.

Meanwhile, on the other side of the Irish Sea, England has decided to go Full Islamofascist.  The news broke Saturday morning (5/26) that the previous afternoon the leader of the English Defense League, Tommy Robinson, was quietly and peacefully live-streaming via his cell phone outside a court in Leeds, West Yorkshire, about a trial of a Moslem “grooming” gang that enslaved and gang raped young girls.

These gangs have been operating for years, enslaving and raping hundreds and hundreds of children.  Here are the charges against just one of the 29 defendants at the Leeds trial:

“Amere Singh Dhaliwal, 34, from Huddersfield, West Yorkshire, is accused of 54 charges, including 21 charges of rape and 14 charges of trafficking with a view of sexual exploitation against eleven different girls from 2004 to 2011.”

Suddenly, he was arrested by British police for disturbing the police.  Within six hours, Robinson was arrested, given a trial, convicted, sentenced to 13 months in jail, and imprisoned in a jail dominated by Moslem convicts who may very likely kill him.

The UK government has been trying to cover up any exposure of the Moslem Rape Gangs terrorizing cities all over England, and had to shut Tommy up.  Even more unbelievably, the judge who convicted him in his kangaroo court placed a gag order on the press criminalizing any reporting of the event. 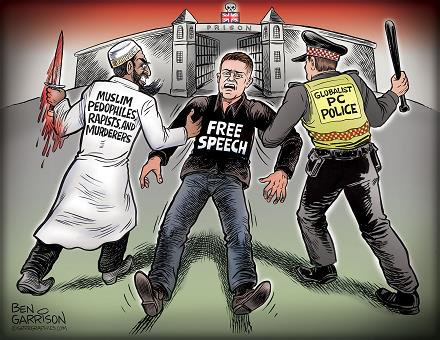 Instantly, protests broke out all over England, forcing the gag order to be rescinded.  A huge protest in Leeds took place this afternoon.

To keep up with this, there’s the #FreeTommy twitter hashtag.  With any luck, the Free Tommy protests may stop the suicidal Islamification of England and the Union Jack looking like this: 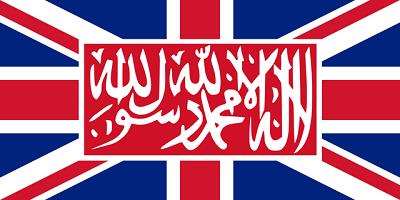 Tommy Robinson is the HFR Hero of the Week.

What’s happening to England is a true historical tragedy.  Elsewhere, however, sunshine is appearing.

*Yesterday (5/31), the Government of Denmark banned the burqa.

*Yesterday (5/31), the WaPo reported that the Moslem Terror Group Hamas is in serious crisis.

*Today (6/01), several twitter sites report that the nationwide truckers strike throughout Iran is now in its 11th day.  Anti-regime protests are occurring daily now in dozens of cities.  Find out more at #IranProtests and #IranRegimeChange‌. Also see #WhiteWednesdays.  As TTP has been saying for many years, women’s rights are Islamofascism’s Achilles Heel.

Let’s close with this reminder of how cool it is right now to be American: 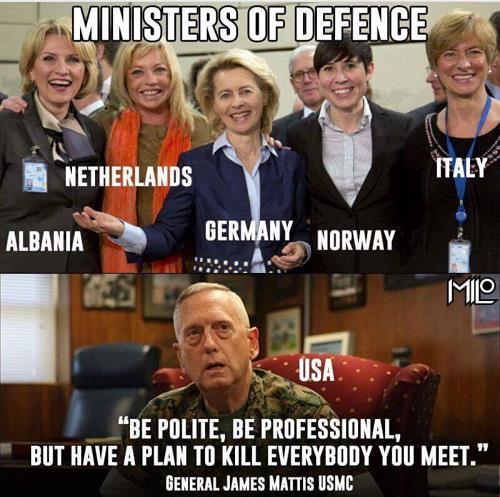 Bogart would have loved Mad Dog.