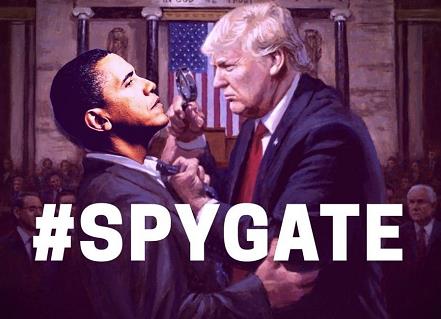 The Storm we have been waiting for has finally begun.  It was preluded in last Friday’s HFR (5/18):

The Wednesday POTUS Tweet was a historical message.  No longer is the target simply the “Deep State.”  Now it is the “Criminal Deep State.”  It gives a masterfully memorable name to the culminating criminal scandal:  Spygate.  And the critical message is in two words: “turned around.”

Focus on those two words, folks.  POTUS saw the pivot in the Wall Street Journal article last Friday (5/18), “Where In The World Was Barack Obama?”, and drove it home on Monday (5/21):

Such a good question that it sent the entire Fake News Establishment Media into apoplexy.   Naming the conspiracy against him Spygate, calling the Deep State Cabal criminal, and asking this question means only one thing – Trump was playing bare knuckle offense fully willing to pin the whole criminal plot on Obama himself.

This is the Dems’/Left’s/Media’s Red Line, and the instant they all realized Trump would cross it, they turned from offense to defense, circling the wagons to defend Obama at all costs.  Tables turned around.

Investors Business Daily in “Obama White House Was Behind Trump Investigation” (5/23), and a number of analysts are showing that it was Obama or someone directly under his supervision that organized the Comey-Clapper-Brennan-DNC hiring a spy on the Trump campaign, Stefan Halper, and cooking up the entire Russia Collusion Hoax.

The whole Deep State-Democrat-Media Complex is in a state of panic right now – and Trump has no intention of letting them off the ropes.  Here’s how Scott Adams sums up their defense of Spygate: 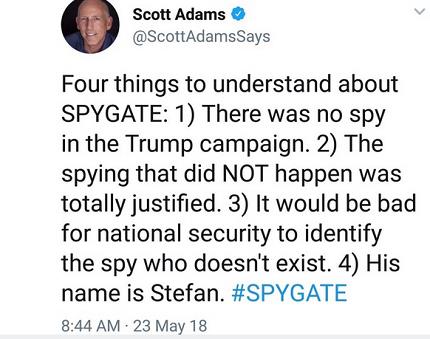 And be sure and read Jack Kelly’s masterful The Left Is Losing It (5/22) – the TTP Must-Read of the Week.

As a Chicago political mobster, Obama knows to assign the real dirty work to the biggest thug you have – and for Spygate, that was John Brennan.  He was so hated at the CIA there were jokes like this: 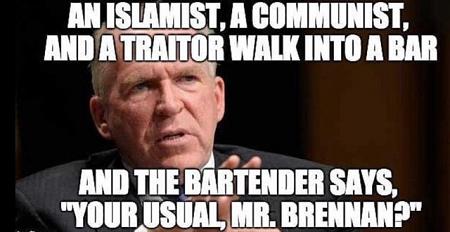 Even before the Inauguration in early January 2017, Chuck Schumer warned Trump not to mess with Brennan’s CIA:   “They have six ways from Sunday at getting back at you.”

So it was no accident, Comrades, that right after Gina Haspel’s Senate confirmation as CIA Director (5/17) and on the day of her swearing in (5/21) – which POTUS attended – Trump felt free to go straight for Brennan’s jugular.  Haspel will shut Brennan out of getting dirt and instead has the dirt on him.

Schumer was wrong, Trump is smarter than he or Brennan.  POTUS wants Brennan in jail.  Don’t bet against it.  Monday (5/21): 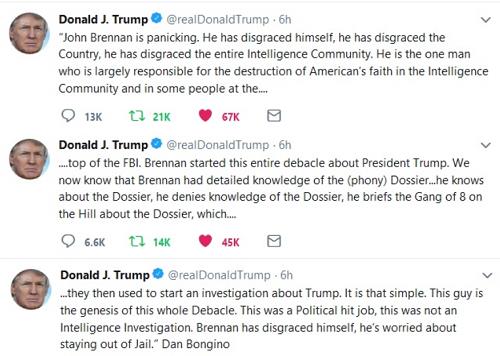 It’s also no accident that with the emergence of Spygate, on Tuesday (5/22) FBI Agents Request Subpoenas from Congress So They Can Testify Against Comey, McCabe, Lynch, and Holder.  Trump backed that up yesterday (5/24):

And he hammered away on Spygate this morning (5/25): 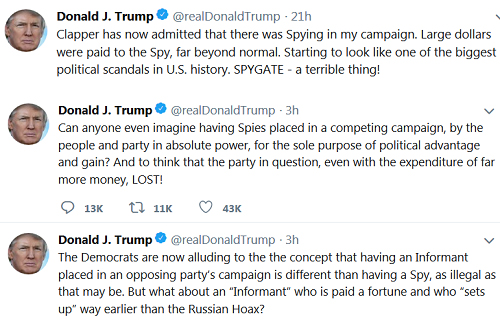 Game on, the storm is here, POTUS knows he’s got them on the hook, he’s reeling them in to put the whole cabal in Leavenworth.  And what to do with Obama? 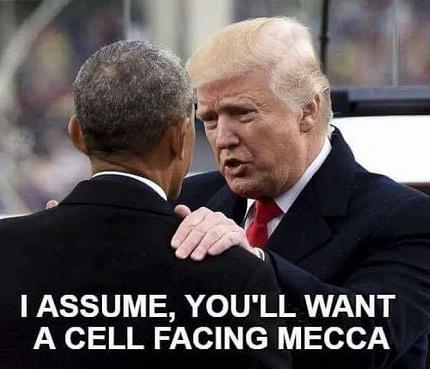 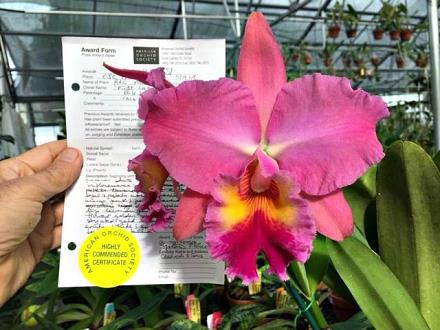 Almost as beautiful as the woman it’s named after.  Yes, in what wags instantly dubbed Flotus Flower Power, the American Orchid Society on Saturday (5/19) gave its highest award for the new hybrid orchid Rlc Melania Trump.

Might as well commemorate this with a picture of Melania that’s now going viral: 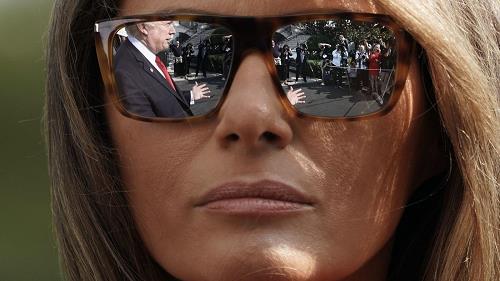 And here’s another beautiful lady with the Quote of the Week: 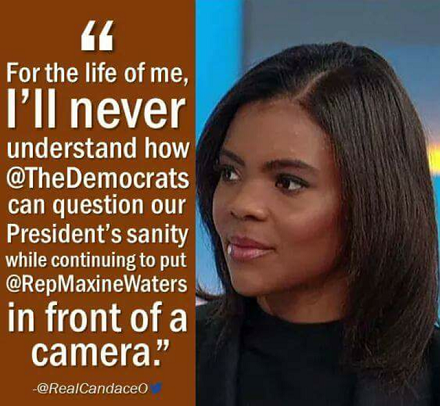 Plus we have this gut-wrenching truth in the Sums It Up Department: 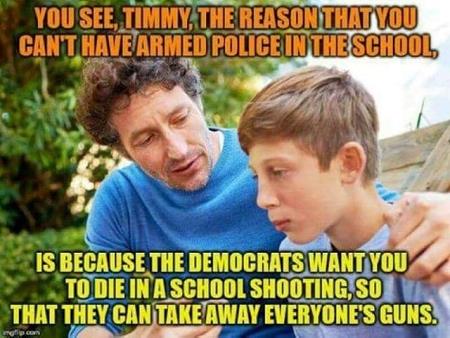 Okay, back to business – although this is pretty funny too.

The Fake News bozos think they’re having a field day making fun of POTUS for canceling his June 12 Summit with Kim Jong-un.  They’ve been untiring in quoting Nancy “Alzheimer’s” Pelosi’s quip yesterday (5/24) that Kim must be having a “giggle fit” laughing at Trump.

Well, there’s more than one way to look at this.  For example: 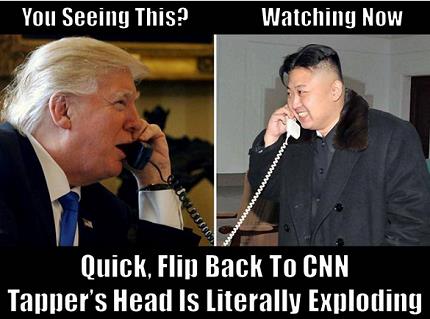 Actually, what is happening is China’s Xi Jinping is getting a world-class lesson in The Art of the Deal.  He is getting schooled, and let’s hope his considerable smarts can override his even more considerable ego to accept it.

As North Korea is a totally owned colony of China’s, Kim is simply Xi’s colonial mouthpiece.  When Xi dangled a Nobel for Trump on the Norks, he expected Trump to back off on hard trade deals and let him expand control over the South China Sea.  Not a chance.

Xi realized he make an Epic Fail.  The immediate result was that he had Kim make nicey-nice this morning  (5/25) asking the American President to reconsider.  Instantly this morning came the response:

So the June 12 Summit may be back on.  Yet there is a far more important and long-ranging result for Xi in all this.  He has gained a whole new level of appreciation of just how smart – Chinese smart – Trump is.

“Chinese smart” means they’ll use every angle they can think of to screw you to their advantage, and if you’re too dumb or limpdick to let them get away with it, that’s your fault not theirs.

Let’s face it – NorkLand is a poverty pit of no threat to us whatever.  China is the major threat to us, at least one order of magnitude greater than any other place or entity on the planet.  The Chicoms are vastly more dangerous to America than the Soviet Union ever was.

Thus what happened this week on this summit flap is of the most extreme importance geopolitically.  The only thing Xi and his fellow Chicoms respect is real hardcore Chinese smarts in an adversary.  The realization that Trump has this in spades and can’t be rolled is an ice cold reality shower for Xi.

Let’s watch and see what Xi has learned from this.  Unfortunately on our side, TDS has killed too many Democrat and Fake Newsers’ brain cells for them to learn anything.  POTUS understands.  This morning:

Which brings to mind: 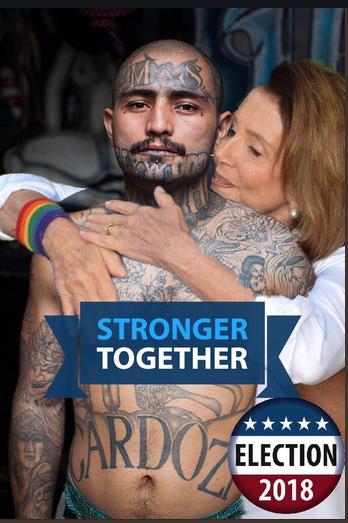 Sunday (5/20):  Trumponomics: More than Two-thirds of Americans Credit the President for the Booming Economy.  Nancy “Crumbs” Pelosi gives all credit to Obama.

Monday (5/21): The Supreme Court just handed business a huge victory, and Ginsburg is angry.  The City Journal calls it an Epic Decision.  Class action lawsuit lawyers are jumping off ledges all over Manhattan, Washington DC and elsewhere – with crowds below yelling, “Jump!  Jump!”

Tuesday (5/22):  European Companies Flee Iran to Avoid US Sanctions.  The Euroweenies discover to their shock and dismay how Trump is the polar opposite of Ameroweenie Obama.  French Total cancelling $5 billion investment just one example of many.  Iran’s economy is down the tubes.

Wednesday (5/23):  Liberals Meltdown Over NFL Rule Requiring Players to Stand for Anthem.  POTUS decided to twist the knife and trigger libtards even more, saying on Fox that NFL players who kneel should get out of America.

Thursday (5/24): President Trump Signs Bill Unraveling the ‘Dodd-Frank Disaster’.  This is S.2155, the Economic Growth, Regulatory Relief, and Consumer Protection Act that was passed with substantial bipartisan support:  in the House 258-159, and the Senate by two-thirds, 67-31.

This is a big deal – thousands of banks are free of suffocating rules that only big banks can afford (the purpose of Dodd-Frank, so that the bigs could gobble them up and stifle competition).  Even the New York Times admits this is a stunning victory for Trump – and the economy.

Time for the HFR Hero of the Week.  She’s a lady likely have never heard of – Jazmina Saavedra.

“A prejudiced California pol likely flushed whatever election hopes she had down the drain after targeting a transgender person in a restaurant bathroom.”

Every article in Google on her discovering a man in a Denny’s ladies’ room describes the man as a “transgender woman.”  Look at the video – it’s a man in a man’s clothes with a man’s voice pretending to be a woman:

Jazmina, in alt-right terms, is “based.”  She heads “Latinos for Trump” in South LA.  Her Twitter feed is cool – 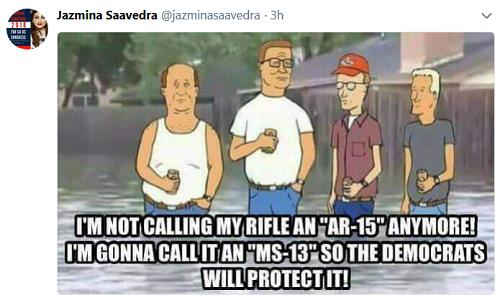 Her nickname is – what else? – Jaz, and her campaign website is Vote for Jaz.  She is pro-life, pro-military, pro-American and pro-Trump all the way.  The CA primary is 11 days away on June 5.  Please consider donating to Jaz.  We – and POTUS – need her in Congress.

Which brings us to Bruce.  Yesterday (5/24), The Hill headline was: “Caitlyn Jenner: On ‘LGBT issues,’ Trump is ‘the worst president we have ever had’.”

Ah, Bruce – here’s a news flash: the vast majority of Americans call this “winning.”  Besides, the “worst ever” since when?  There were no such thing as tranny rights before Obama invented them.  Everyone before him, and most everyone now considers “transgenderism” a mental illness with a masochistic compulsion for self-mutilation.

Another thing, Bruce — this is what LGBT stands for — for us: 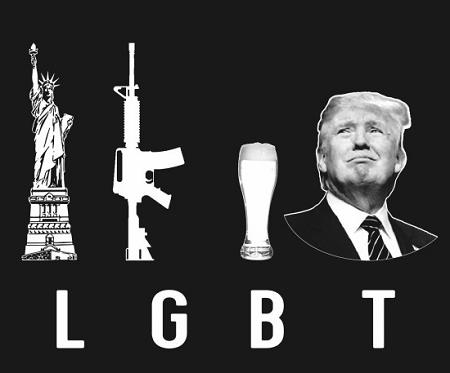 We close with a reminder that Monday (5/28) is Memorial Day.  It’s a day to welcome the summer, to barbeque and enjoy being with friends.  But I know as a Patriot, you’ll also take time to reflect on the deep solemnity of this day.

Listen to the words of Ronald Reagan expressing his nation’s gratitude for those who gave their lives for our freedom.  Listen to taps being played for them.  This is a sacred day.