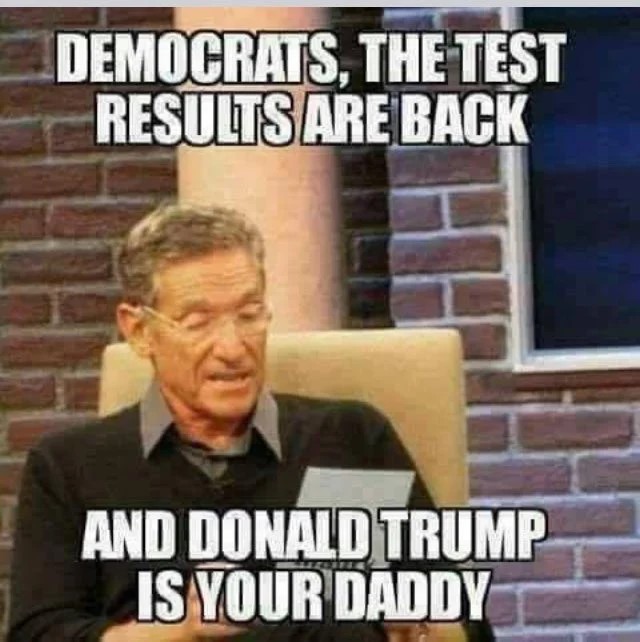 Champagne and popcorn aren’t the usual combo for a celebration, but they sure are this week.

No ifs, ands, or buts.  This is a Victory Week for the POTUS, for America, for you and me.  Time to feel good, pop the corks, and plunge your fingers into a bucket of well-buttered popcorn to watch the show.

How can we not when the week began waking up Monday morning (3/25) with this NY Post cover and the Drudge Report siren blaring? 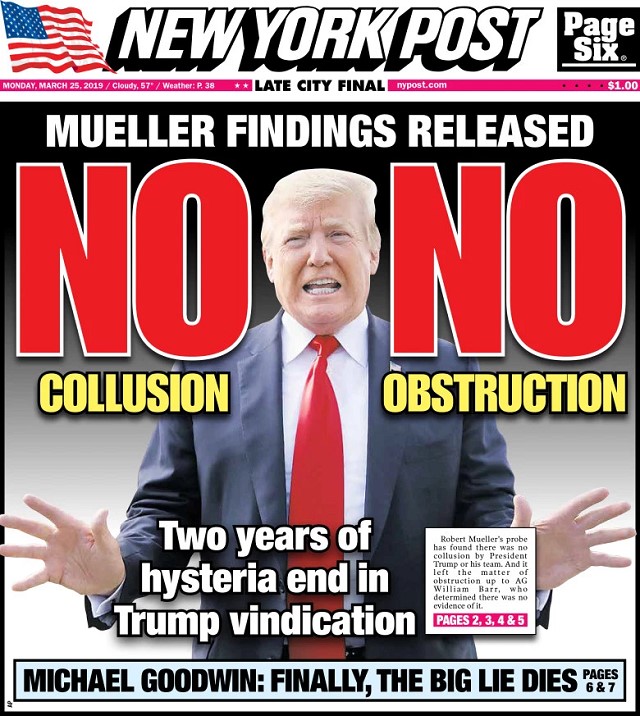 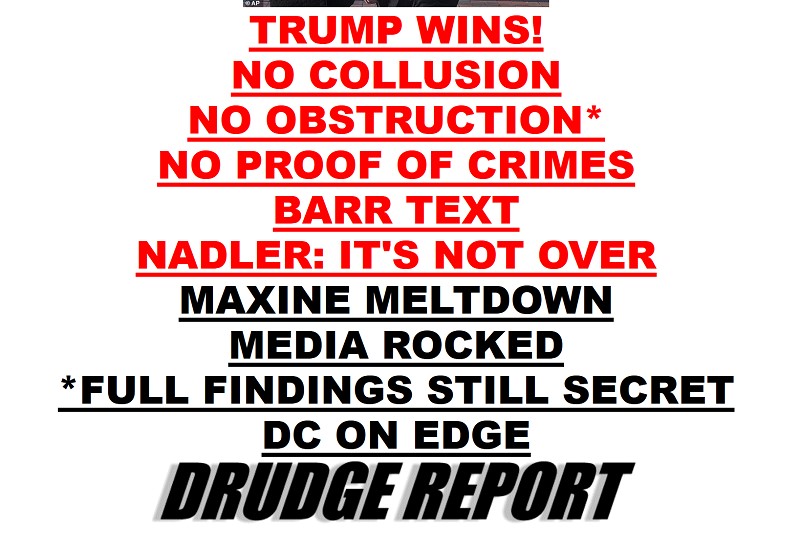 And CNN – CNN! – has a lead story Total Vindication of Trump on Collusion – with CNN proclaiming such vindication “ought to come as a moment of huge national relief.”

Of course, such contrition didn’t last more than a few hours, with CNN returning to Fake News form the next day (3/26) as Crazy Chris Cuomo insisting on “collusion” just the same, then coming out Wednesday (3/27) with a ridiculously rigged CNN poll claiming “56% think Mueller Report does not exonerate President Trump of collusion.”  Yeah, 56% of those addicted to CNN Fake News lies.

Meanwhile, in a legitimate poll, Rasmussen yesterday (3/28) reports that 61% of all likely voters want further investigations of Trump to end.

The Loons of the Left, from those on CNN, and MSNBC like Rachel Madcow, to Adam Schitt and Fatso Nadler in the House are still in the first stage of Grief – Shock and Denial.  They and many others may get stuck there or move just beyond into Anger to get stuck again into Depression.

With luck, they’ll stay stuck there long enough to quit lying for a living as journos or pols and learn to code.  Only when earning an honest living can they advance to Bargaining and finally Acceptance.

Meanwhile, the good news is that House Pubs have been given an injection of POTUS Moxie Juice and are starting to go on offensive.  On Monday (3/25), House Minority Leader Kevin McCarthy called on Adam Schiff to resign as chair of the Intel Committee.  Yesterday (3/28),  Mike Conaway (R-TX) read a letter signed by all Pub members of the House Intel Committee to Adam Schitt’s face demanding he resign his chairmanship.

POTUS then upped the ante, calling on Schiff to resign from Congress:

Then last night at his rally in Grand Rapids, he gave Schiff a new nickname, “Little Pencil Neck”…

Look beyond the ridicule, however, to where he’s serious.  Note the words “knowingly and unlawfully” in the tweet and the word “accountability” that should scare Little Pencil Neck schiffless.

“There has to be accountability” means legal accountability, meaning criminal prosecution.  POTUS revoking Schiff’s security clearance, which he can do for any reason and would automatically kick him off Intel, should be the least of his worries.

POTUS wasn’t just talking about accountability for Pencil Neck.  No, he meant all the sick-in-the-head Dems and Deep Staters responsible for the Collusion Delusion.  On Monday (3/25), his closest advisor Kellyanne Conway told White House reporters that James Comey “should go get a lawyer” for his role in the FBI-Clinton conspiracy to invent to the collusion hoax.

Another indication POTUS is going for the jugular is this of his yesterday (3/28):

The message is clear for the tweet quickly flows into not him on Hannity but of Nunes explaining to Maria Bartiromo (starting at 1:30 into the clip) that he would be submitting criminal referrals to the DOJ requesting criminal prosecution of those in the FBI and DOJ (e.g., Comey, MCabe, Ohr and others, although Nunes gives no names):

All the Hill-talk now is that Nunes will also submit a criminal referral to prosecute Obama’s loathsome CIA Director John Brennan, especially since Senator Rand Paul on Wednesday (3/27) publicly accused Brennan of being behind the infamous “dossier” as the excuse for the whole Mueller investigation.

We’re not talking low-lying fruit here, but perp walks for the big dogs.  How big?  Listen closely to the President’s words on Tuesday (3/26) to reporters:

For the record, here’s the White House transcript:

”Q    Mr. President, you’re accusing the people who launched the investigation into your campaign of treasonous acts.

Q    Mr. President, do you think it reached the West Wing of the Obama White House?

THE PRESIDENT:  I don’t want to say that, but I think you know the answer.”

Let that sink in deep.  As Keith Jackson would say, Whoa, Nellie.

Thus, on the floor of the Senate yesterday (3/28), a Senator blocked a resolution calling for the immediate release of the full Mueller Report.  Listen to his reasons why, because it is for them that he, along with Devin Nunes, is the HFR Hero of the Week

So far, all we know about the Mueller Report is what AG Barr’s letter to Congress said about it.  According to Barr, the Special Counsel’s investigation determined that one of the “main Russian efforts to influence the 2016 election” was to conduct “computer hacking operations designed to gather and disseminate information to influence the election.”

“The Special Counsel found that Russian government actors successfully hacked into computers and obtained emails from persons affiliated with the Clinton campaign and Democratic Party organizations, and publicly disseminated those materials through various intermediaries, including WikiLeaks.”

“In May of last year, Fox reported that “Murdered DNC Staffer Seth Rich Shared 44,000 Emails with Wikileaks.”  Rich was infuriated about John Podesta and the DNC rigging the primaries against Bernie Sanders and for Hillary.

Shortly afterwards, the suspicion is, Podesta hired thugs to murder him – then began inventing the cover-up myth that the Russians did it by hacking into DNC computers – impossible as the clock speeds of the email downloads show it was done on the inside, not via an external internet connection.”

The lie about successful Russkie hackers is more evidence of the Mueller Report is a cover-up (TTP yesterday) of the Clinton-Obama people to stage a coup against Trump – for it was Podesta’s lie about Russian hacking that started the entire Russia Collusion myth.  The myth was invented to coverup Podesta’s murder of Seth Rich, the DNC computer specialist who copied data (no hack, provably impossible) and gave it to WL .

FYI, the latest rumor making the rounds of staffers’ offices on Capitol Hill is that the Steele “pee dossier” was originally sent to Hillary by Putin’s people as a warning about the dirt the Kremlin had on Bill.

The story is that when Bill got $500K for speaking to a Putin-crony company in Moscow in 2010, he stayed in the same presidential suite at the Ritz-Carlton as did Obama the year before.  That’s verifiable.

The story then is that due to Bill’s hate for Obama for denying his wife the nomination and presidency in 2008 (also verifiable), it was he who paid a prostitute to urinate on the bed Obama slept in.  Of course KGB/FSB cameras got it on tape.

The warning was to have leverage over Hillary as Putin was sure she would be elected in 2016.  When she learned that Trump had stayed at the Ritz in 2013, she had the report doctored to switch Bill’s name to Trump.  Rumor?  Sure has the ring of believability.

Now a word on why the Chicago corruption of setting Jussie Smollett free is so astoundingly bald-faced for the world to see.

It’s one thing to document how a host of Dems from the Obamas on down are “tainted” by the Smollett Hoax.   They can deal with being tainted.  Hard evidence is another matter – like all those calls on Smollett’s cell phone to Kamala Harris planning the phony “attack” fr media hype on her “anti-lynching” law.

What happened is that Jussie’s prosecution had to be squashed so he wouldn’t rat out on Kamala and her accomplice Cory Booker in a plea deal.  Problem is, his lawyer Tina Glandian is such an idiot she’s now claiming his phony “attackers” were wearing whiteface makeup.

Bottom line:  if the FBI doesn’t conduct a federal investigation and the DOJ doesn’t prosecute not only Smollett but crooked Cook County prosecutor Kim Foxx, we’ll know Obama Deep Staters are too entrenched in both to thwart even a promise of POTUS.

Okay, compounding Victory Week was a quartet of WinningI

*Tuesday (3/26): Green New Deal Dies in Senate 0-57, Not One Democrat Votes For It.  McConnell sent out this classic ridiculing Dems:

Occasional-Cortex’s Fascist New Deal didn’t die before Senator Mike Lee of Utah  treated it with the seriousness it deserved – by comparing it to the level of reality displayed in an artwork of Ronald Reagan Machine-Gunning Enemies Riding on the Back of a Velociraptor. 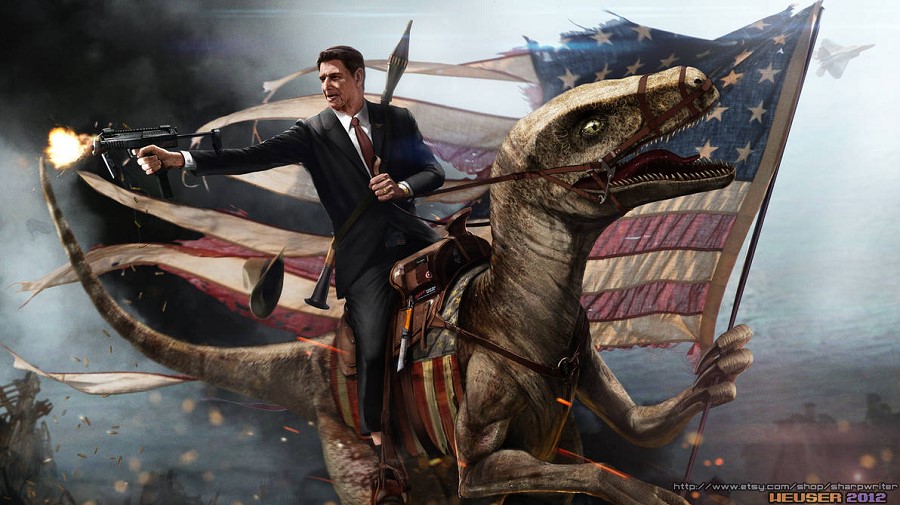 Gotta love the artist’s touches like the Indiana Jones hat and all the cartridge casings falling in the air.  The artist is Jason Heuser.  You may have seen this of Trump by him: 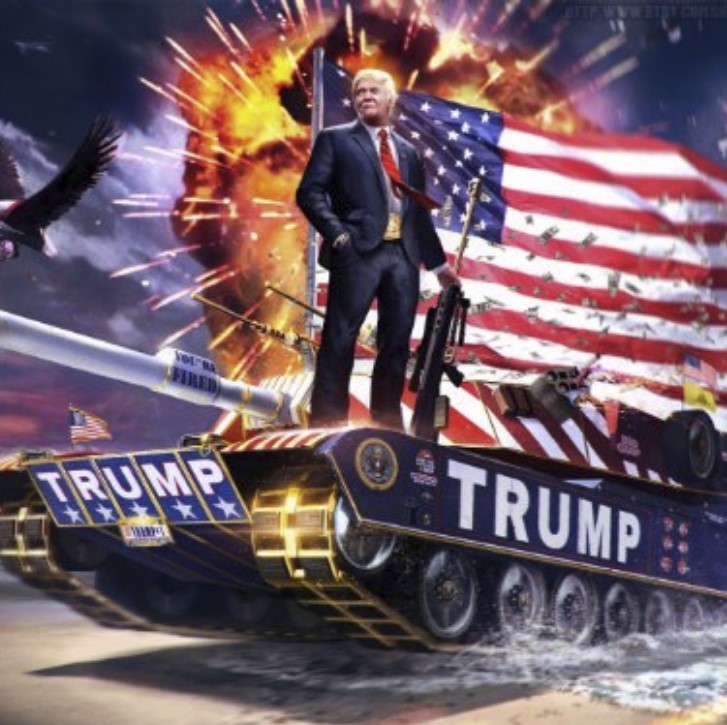 In any regard, you’ve got to watch Mike’s floor speech.  Ridicule is the only way to deal with Miss Cortex’s Bolshevik lunacy.

Before we close, let’s take the time to thank our Vietnam Vets for fighting Communism where it mattered – especially those here at TTP – on Vietnam Veterans Day.  Here is the POTUS message to them: 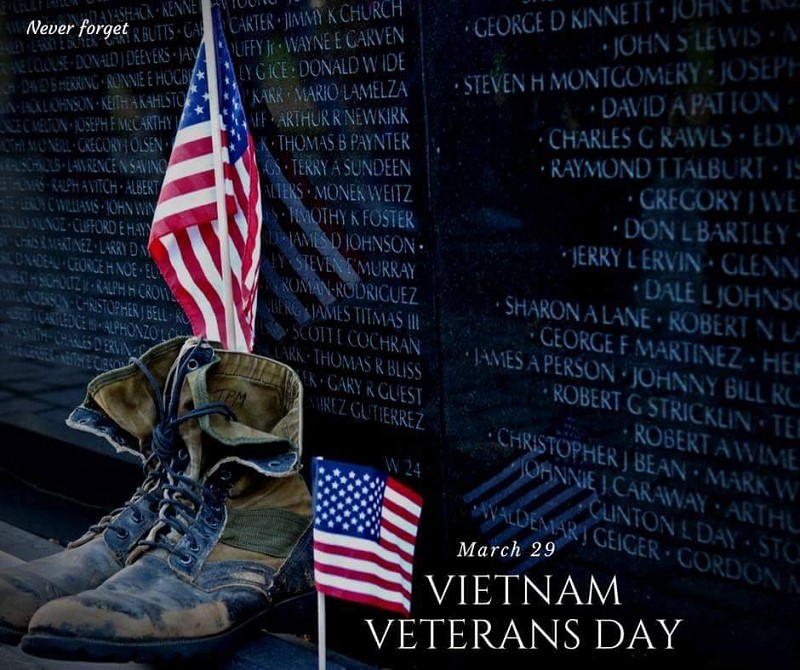 El Donaldo really did deliver a barnburner in Grand Rapids last night.  When you can take a break over the weekend, it’s worth watching the whole 90+ minutes.

That’s it, folks.  An amazing week.  Let’s hope next week will be the same as Trump shuts down the border with Mexico! 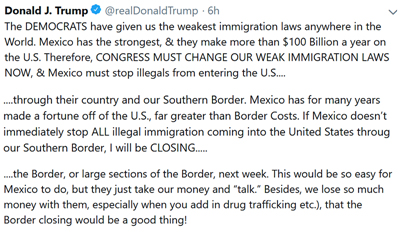