You’ve heard of, perhaps been lucky to have been to, the French Riviera, from east of Marseilles to St. Tropez, Cannes, Nice, Monaco and the Italian border.  You may also be familiar with the Italian Riviera (“riviera” is Italian for “coastline”) from Sanremo to La Spezia.

But how about Tuscany’s Versilia Riviera just north of Pisa and its Leaning Tower?  At its center is the charming beach community of Viareggio. 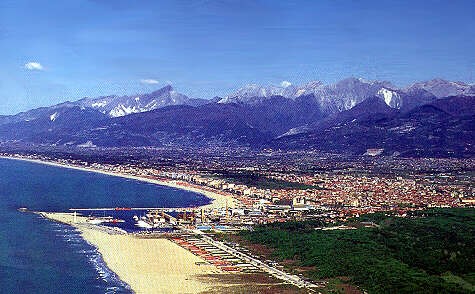 For 146 years, since 1873, the town has held a carnival parade at this time of year.  It lasts for a month ending on Fat Tuesday – Mardi Gras – the day before Lent begins on Ash Wednesday.  It has now grown to such extraordinary proportions that it attracts hundreds of thousands of spectators:  The Carnivale di Viareggio.

This year, last Saturday through Tuesday (2/09-12), the Carnivale began with its now world-famous Corsi Mascherati, the Parade of Gargantuan Floats.  These towering massive paper mâché concoctions of political satire can stand fifty feet high and weigh forty tons – and that indeed was the size of the parade float that took everyone’s breath away:  that of God Emperor Trump created by Italian sculptor Fabrizio Galli.

“The God Emperor Trump float emulates the dominant character of the war game Warhammer 40k, with the soundtrack of the Sabaton. Its gigantic dimensions and theme represent the ambition of the American president to relaunch the missions on the Moon and to create the first space army. The time of intellectuals, philosophers and of old and worn culture is over. The dominant male par-excellence has arrived, democratically, and is now here, among us.” 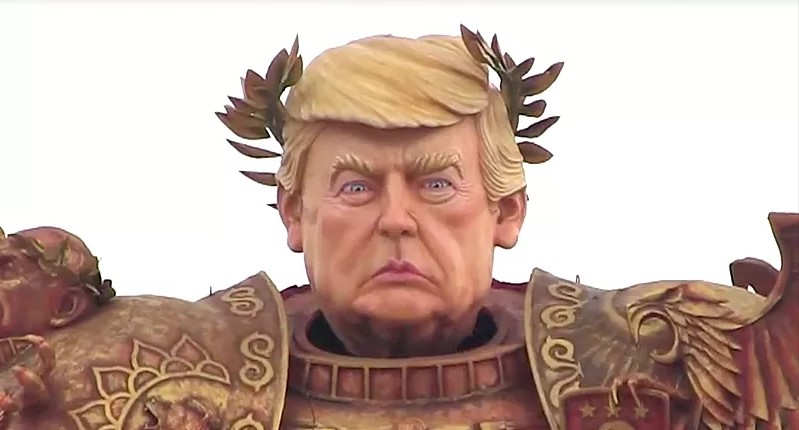 God Emperor Trump is a larger-than-life mythical figure.  Then there is the living human being – who we discovered this week is not a superman.  He is a man who has just broken his promise to America.

So much for that promise.  Despite this monstrosity of 1,159 pages which no one has read entire (just like last March) is one giant $333 billion poison pill preventing border security, Sarah Sanders quickly announced POTUS would break his promise and sign:

This is a complete disgrace.  Who can now believe any promise of his from now on?  Mo Brooks and others in the House Freedom Caucus like Jim Jordan and Mark Meadows are absolutely right saying “The president must veto this bill.”

The whole bill with all attachments and appropriations is actually over 5,000 pages long. Read how bad it is, you’ll get nauseous.  It is designed by Uniparty traitors – Pubs paid off by the Chamber of Commerce that wants cheap illegal labor, and Dems who want illegal votes – to prevent border security.  There is no rationale whatever for POTUS to sign such treason.

And there is no reason to declare a National Emergency to build the Wall – none whatever.  Just as there’s no reason for Ted Cruz to push his EL CHAPO Act, using money seized from the drug cartel kingpin ($14 billion) for the Wall.  It’s also silly as it would never pass the Pelosi House.

Chapo’s money – and all money seized from the drug cartels – is in DOJ coffers.  It is not taxpayers’ money that requires a House appropriation to spend it.  Congress has no say in how it is spent.

“Drug cartels move anywhere from $60 billion-$100 billion dollars from the United States to Mexico annually from the sale of drugs and other things. We confiscate, as a U.S. government, about $5 billion of it… My thought is, let’s just take this money we’re confiscating and use that to build the barrier. It wouldn’t be the Mexican government, it wouldn’t be the U.S. taxpayer, it would be the cartels’… That money is already within the executive branch, so Congress wouldn’t have to appropriate… we actually have dollars within the executive that could be used.”

This seized money – which includes Chapo’s $14 bil now he’s been found guilty – is supposed to be used for “law enforcement.”  What better law to enforce that that to stop the illegal invasion of our country?

And if the Fascicrats and Pub Unicrats protest, all POTUS has to do is to ask, where were their protests when Obama AG Eric Holder extorted $17 billion from Bank of America and used the money to fund radical leftist Democrat groups?

By now, however, you may be asking, if billions have been available within the executive branch all along, why has Trump bothered at all with this ridiculous circus of demanding to get the money out of Congress?  Why didn’t Trump use that money to build his Wall starting Day One of his presidency two years ago?  Why isn’t the Wall already built by now, his largest and most important promise already kept?

Yet, as you know by now, the President declared in the Rose Garden this morning (2/15) that he will sign this Anti-Border Security travesty and declare a National Emergency to use $8 billion for the Wall.  Okay on the latter, but there’s no excuse for the former.  It is a disgrace.

In more ways than one.  Here’s the 12 Noon main headline on Drudge now:

It links to Daniel Horowitz condemning Uniparty drunken-sailor spending – and the refusal of the President to put a stop to it.

“We’re now $22 trillion in debt, yet despite all that red ink, the Mexican cartels have control of our border and we’re not one bit closer to spending money on our own security. We’ve gone into deep debt for everything except the core function of the federal government.

Instead Republican senators are meeting with Ivanka Trump to see how they can create a new entitlement of paid family leave like they have in Europe!”

What’s the point of having a Republican Party at all?, Daniel asks.  We could observe, so much for all the blather about the GOP being Trump’s party now.

It’s a massive shame that POTUS won’t veto the Uniparty treasonous scam, if only because his caving overshadows all the terrible news that befell the Dem Fascicrats this week.  Might as well enjoy it.

The Hill is Capitol Hill’s daily newspaper distributed to all Congressional and federal offices in Washington.  It is not radical left but neither is it conservative – you could call it “center-left.”  It’s read by everybody in DC.

And on Monday morning (2/11), they all saw their copy placed on their desk with the blaring front page story written by ace investigative journo John Solomon:  The Case for Russia Collusion… Against the Democrats.

”The evidence shows the Clintons financially benefited from Russia — personally and inside their charity — at the same time they were involved in U.S. government actions that rewarded Moscow and increased U.S. security risks.

The intersections between the Clintons, the Democrats and Russia carried into 2016, when a major political opposition research project designed to portray GOP rival Donald Trump as compromised by Moscow was launched by Clinton’s presidential campaign and brought to the FBI.

Congressional investigators have painstakingly pieced together evidence that shows the Clinton research project had extensive contact with Russians.

Collusion can be criminal if it involves conspiracy to break federal laws, or it can involve perfectly legal, unwitting actions that still jeopardize America’s security against a “frenemy” like Russia.

And there’s irrefutable evidence that her opposition research effort on Trump — one that inspired an FBI probe — was carried out by people who got information from Russia and were consorting with Russians.”

One of those folks who read this on his desk was Bill Barr, sworn in yesterday (2/14) as Attorney General.  He is now in charge of Mueller’s Witch Hunt.  Very easy, with The Hill story, to order Mueller to thoroughly investigate Clinton-Russia Collusion – and to hire non-Democrats to do the investigating, which he, Barr, will oversee.  Will he?

The other bludgeon the Dems got hammered with this week was the Senate Intelligence Committee after an exhaustive investigation finding “no evidence of Trump-Russia collusion.”   That’s not just the reporting of Fox saying “no evidence.”  It’s Politico, NBC, even MSNBC. CNN?  Surely you jest.  Nonetheless, the Dems’ Trump-Russia myth just died, and tout le DC monde knows it.

And really sticking a fork in it was one of the Beltway’s truly evil scumbags, Former FBI Deputy Director Andrew McCabe telling 60 Minutes he was organizing a coup against Trump.  The news was released yesterday (2/14).  Now will new AG Barr prosecute this vile traitor, along with his conspirators like James Comey, and put them in orange jump suits?  The HFR will believe it when it sees it.

Then there’s the most enjoyable headline of the week:  Scandals Rip Apart Democrat Party.

“A raft of scandals involving racism, antisemitism, radicalism, allegations of sexual assault, and extreme views on a variety of issues has hit the Democrat Party hard as it slinks back into the limelight after a two-year period of GOP control of all levers of government in Washington and most state governments across the country.

The scandals are far-reaching, and affect the highest levels of the party. The policy developments on everything from environmental issues to life to immigration are equally profound and deep-seated in the Democrat Party.”

That would be live birth abortion murder, the ridiculed Green New Deal, the overt Anti-Semitism of Moslem Congresscritters, and more.  POTUS had fun with the GND and greenie-weenie Dems.

And so did others with Dem ilk. 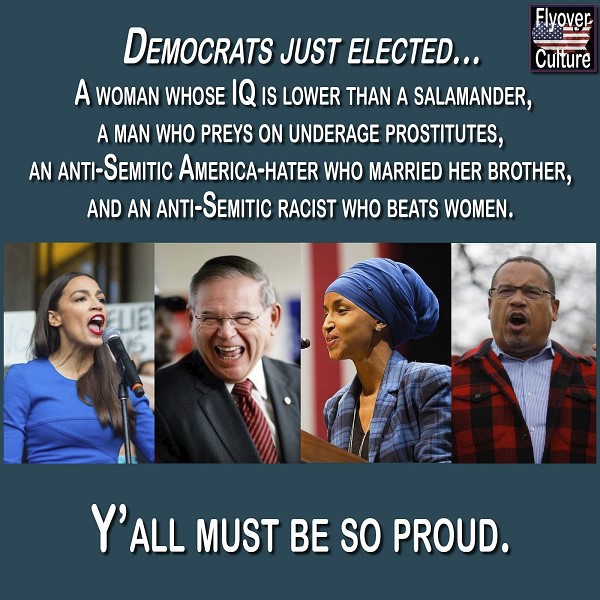 And today (2/15), the latest earthquake is Occasional-Cortex being massively condemned by Amazon and New York Dem Gov Cuomo for torpedoing Amazon’s 2HQ in Queens.  AOC (Airhead of Congress) is acquiring a very impressive list of very powerful Dems who hate her guts.  Can’t wait to see Jeff Bezos’ Washington Post rip her guts out on the WaPo front page – over and over again until she’s toast.

Time for the Hilarity of the Week, from the Hyper-Libtards of Sunday’s (2/10) London Guardian:  Plummeting Insect Numbers Threaten Collapse of Nature.  It’s all our fault of course.

Sure wish idiot hair-shirts dreaming up Chicken Little eco-scares would go extinct though.

The Funniest Picture of the Week is a bunch of idiots believing in Chicken Little sitting in a snowstorm covered in snow listening to a fellow idiot warning them about the dangers of global warming – and asking for their vote for her to be President of the United States. 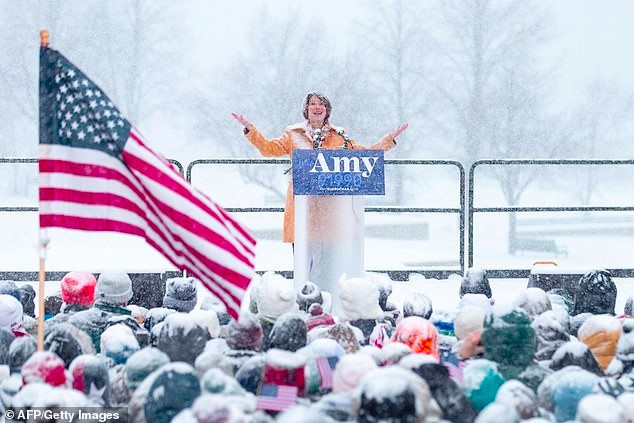 This is a real picture of Dem Sen. Amy Klobuchar (MN) announcing her running for president, not a joke photoshop.  POTUS couldn’t resist:

Look at that photo and realize all of the more than two dozen Dems thinking they can beat Trump in 2020 are just as idiotically fascist as Senator Snowwoman.

Why are there so many?  Is there some secret that gives them reason to believe that the Dem nomination is a sure-fire ticket to the Oval Office?  Yes, there is. 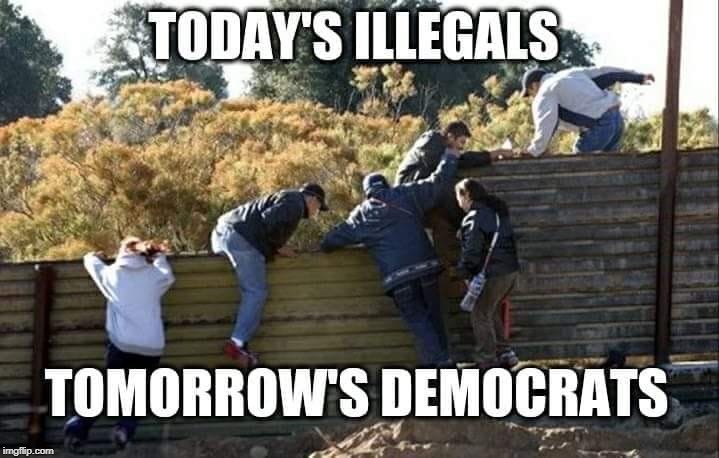 Open Borders and Voter Fraud is the Dem’s magic wand to victory in 2020.  Actually, open borders to get more illegals in is just frosting on the Dem Fraud Cake – there are tens of millions of illegals already here, and being registered to vote Dem.  What is being done for real to prevent it?

Sorry to end on a downer, but this has been a week that should have been more than half-full and it’s been drained more than half-empty.  Let’s hope next week will be the reverse.

Meanwhile, let’s remember what month this is: 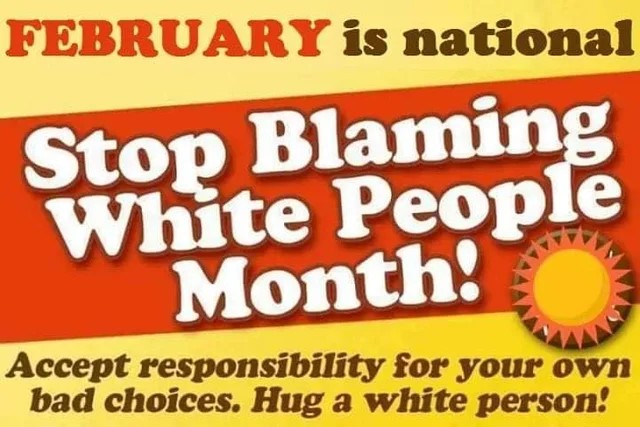 Send this to every liberal you know.  Might as well have some fun this week.