What a glorious week.  Where do we start?  How about saying hello to the flip side of MAGA:

Miss Occasional-Cortex certainly earned her sobriquet of “3B” this week – the Bug-Eyed Brainless Bolshevik – for the childish lunacy of her “Green New Deal” (the link is to the actual bill she submitted to Congress yesterday 2/07).  As one wag observed:  “It looks like something a four year-old in Soviet Russia dreamt up.”

Yet with this, you couldn’t have clearer proof that Global Warming – defined in the bill’s first sentence as “human activity  is  the  dominant  cause  of  observed climate change over the past century” – is the Left’s substitution of Marxism as the new ideological rationale for full fascist government control over everyone’s life.

That in fact is why 3B’s crusade is a cause for celebration.  WSJ’s Kim Strassel gets it:

Kim followed that up with a her column in this morning’s Wall Street Journal, “The Socialist That Could.”   Her synopsis:

“(The Green New Deal) is in the form of a resolution, sponsored in the Senate by Massachusetts’ Edward Markey, on which AOC is determined to force a full House vote. That means every Democrat in Washington will get to go on the record in favor of abolishing air travel, outlawing steaks, forcing all American homeowners to retrofit their houses, putting every miner, oil rigger, livestock rancher and gas-station attendant out of a job, and spending trillions and trillions more tax money. Oh, also for government-run health care, which is somehow a prerequisite for a clean economy.

It’s a GOP dream, especially because the media presented her plan with a straight face—as a legitimate proposal from a legitimate leader in the Democratic Party. Republicans are thrilled to treat it that way in the march to 2020, as their set-piece example of what Democrats would do to the economy and average Americans if given control. The Green New Deal encapsulates everything Americans fear from government, all in one bonkers resolution.”

Last night (2/07), the kicker headlines at the top of the Drudge Report were:

What’s marvelous about this is how many Dems have announced on the #greennewdeal twitter feed how proud they are to support this fascist dementia.  In fact, as of this morning the Green New Deal bill in the House has 67 co-sponsors (all Dems, not a single Pub – even Rinos are not that crazy).

That “Abusive Amy” moniker for the Minnesota Dem who pretends to be “The Senator from Next Door” (the title of her hagiography) comes from a HuffPo piece on Wednesday (2/06) on Klobuchar’s history of abusing her staff.

How nuts is this?  One example of oh-so-many:  In the “Green New Deal FAQs” on 3B’s website, we discover that hamburgers and airplanes will be outlawed:

“We are calling for a full transition off fossil fuels and zero greenhouse gases… We set a goal of net-zero instead of zero emissions in 10 years, because we aren’t sure that we’ll be able to fully get rid of farting cows and airplanes that fast.  (The goal is to) build out highspeed rail at a scale where air travel stops becoming necessary.”

Good luck getting to Hawaii, or from New York to London.  Actually, though, the link to the FAQs is a screenshot of them in the Daily Mail – as they’ve been taken down on 3B’s site. 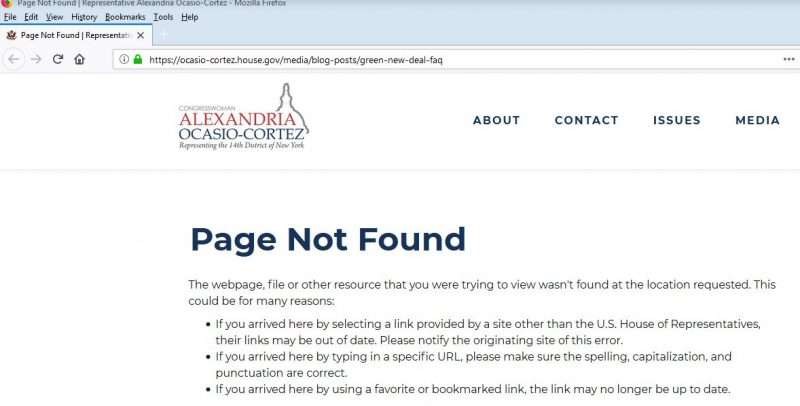 In fact, as of this morning, her entire site — https://ocasio-cortez.house.gov/ — has been wiped clean.  There’s no information on anything, just a message to “Contact our office” for more information.

In fact, the whole thing is so nuts that “’We’re Nuts!’ Isn’t a Great Pitch for a Green New Deal” is the Washington Post headline story this morning.

This impossibly stupid and stupidly fascist bartendress has run out of her 15 minutes of fame.  If there’s a picogram of sanity left among House Dems, there will be a revolt against her.  Pelosi is a corrupt leftie to the core, but she’s not stupid.

It’s a going to be the most entertaining circus in town to watch how she finesses this to prevent a fratricidal war between those willing to destroy their party in the cause Warmist religious fanaticism, and those who are not.  You’ll need plenty of butter for that popcorn.  MABA, baby!

Of course our POTUS knew this was coming when he delivered his historic SOTU on Tuesday.  He took full advantage of it as Pelosi Galore had to grit her teeth and bear it sitting behind him.

As did the rest of her ilk. As portrayed by memesmith Carpe Donktum in his viral video we began this HFR with, played to the music of R.E.M.’s Everybody Hurts, and entitled:  The State of the Democrat Party:  Hurting.

It’s viral because of the emotions it conveys – these Dems are in deep pain, and they have no idea how to end their anguish.  Touchingly, the vid ends with the powerful poignancy of Mitt Romney in a state of agonized wistfulness.

Perhaps the most depressed Dem was Crazy Bernie.  He left himself open though for the best put-down answer of the week: 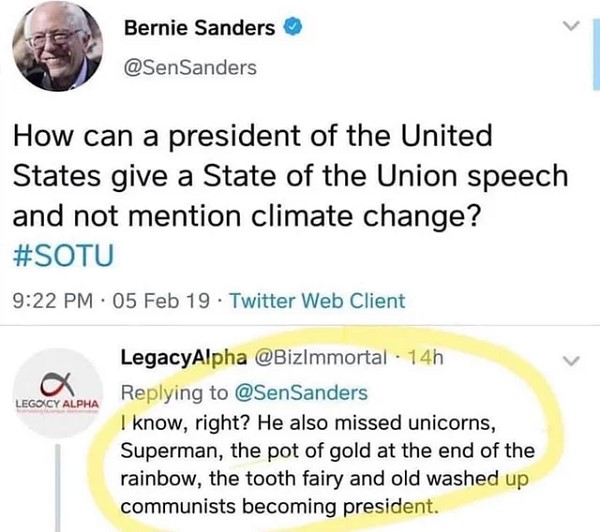 One Dem was cool – West Virginia’s Joe Manchin, who stood up and applauded Trump’s saying:

“To defend the dignity of every person, I am asking the Congress to pass legislation to prohibit the late-term abortion of children who can feel pain in the mother’s womb,” 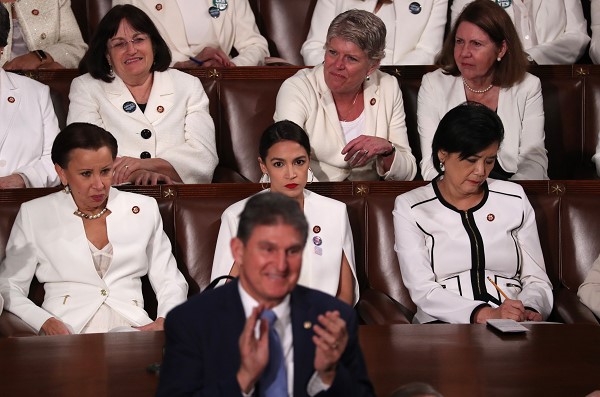 Look at the stone cold hate in 3B’s eyes.  Don’t be surprised if Manchin bolts to other side of the aisle before long.  He also stood, applauded, and gave POTUS a wink of approval when Trump lauded America’s energy boom.

No Dem is going to threaten Joe.  But Nevada Sen Jacky Rosen sure did when new Arizona Dem Sen Kyrsten Sinemma stood up next to her and began applauding POTUS enthusiastically.  Watch carefully in this brief clip, and you’ll clearly see Rosen warning, “Watch your ass.”

Then there was the pathetic Dem rebuttal: 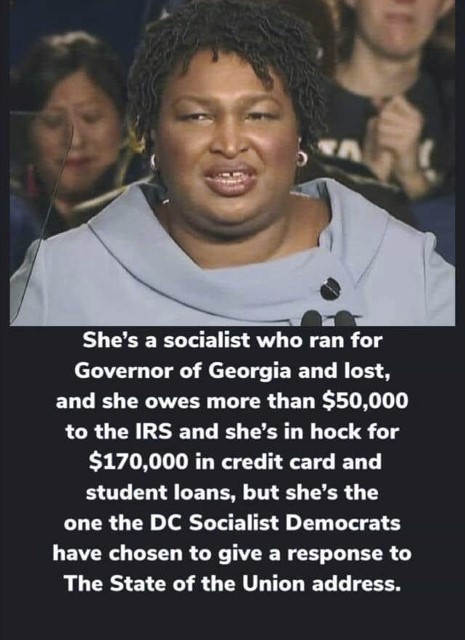 They’re not sending their best.  Yahoo News ran a cringe-worthy story about Abrams’ “history-making rebuttal.”  Listen to the clip of her – she’s a terrible speaker, wooden as a dead tree, reading monotonously from a teleprompter, spouting nothing but worn-out old bromides, the people behind her are green-screened, not really there.

Then Yahoo ran a follow up so childishly absurd that you can’t even imagine grown adults believing:  What’s Next for Stacey Abrams?  Powerful Trump Rebuttal Raises Calls for Presidential Bid.

Yes, Conrad Black is right when he wrote in TTP yesterday (2/07) that Donald Trump Is Annihilating the Democrat Party.

As Jack Kelly describes today (2/08) in A Beautiful Nightmare, the Dems are busy annihilating themselves in Virginia. The New York Post also had fun: 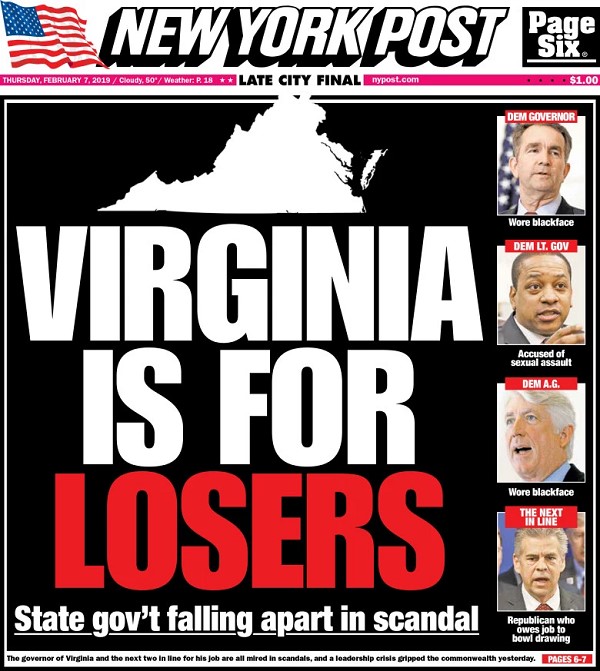 Democrats being laughed at in the national media for being losers – what a beautiful nightmare indeed.

There was quite a show today at the House Oversight Committee hearing.  One of the more revolting Dems now chairs it, New York’s Jerry Nadler.  He sure got his comeuppance when he tried to badger Acting Attorney General Matt Whitaker.  Big mistake:

Loonie Lefty Eric Stallwell (CA) made the same mistake.  Whitaker informed him, “Congressman, I am not here to be a puppet, to repeat terms and words that you say.”

How long have we been asking, When will there be a Trump Justice Department?  When does the DOJ ever indict Dems for their crimes? When does it tell Adam Schitt and Dem Committees no cooperation with their fishing expeditions?  When will Corruptocrat Mueller’s witch hunt be put an end to?

Looks like we just might have found the guy to finally do all this, as he tag-teams with Bill Barr, expected to be confirmed as AG by next month, to give us the Trump DOJ we’re supposed to have.

We got another winner this week, when on Wednesday (2/06) POTUS tapped David Malpass to be President of the World Bank.  I knew David when he was DAS (Deputy Assistant Secretary) at Treasury for Ronald Reagan (he was only 30 years old).

Note in the link the New York Times frets that under Malpass, the World Bank “could be used to curb China’s growing global influence around the world.”  Well, I’m sure David will!

You can also bet David will put the kibosh on the Bank’s agenda of “combatting climate change,” very worrisome to the Slimes.

In short, David is aces.  It will be fun to watch what he does.

Speaking of China, over at AT, Chriss Street explains how China Caves to President Trump in Trade War.  Chriss’ analysis is well worth reading entire.  His conclusion:

“The Chinese must accept that they catastrophically underestimated President Trump’s Trade War resolve to go all-in against China and its multinational corporate fellow-travelers. China must now cut a deal with a relentless adversary.”

Before we end, a story.  A friend asked me to make sure I read an article in Monday’s (02/02) Wall Street Journal, “No Beast So Fierce.”  That was because, he said, “Yours was a noble endeavor.”  That meant a lot to me.

The article is about the horrific toll on humanity in India by man-eating tigers – and a man who dedicated his life to killing them.  It opens with a horrific depiction: 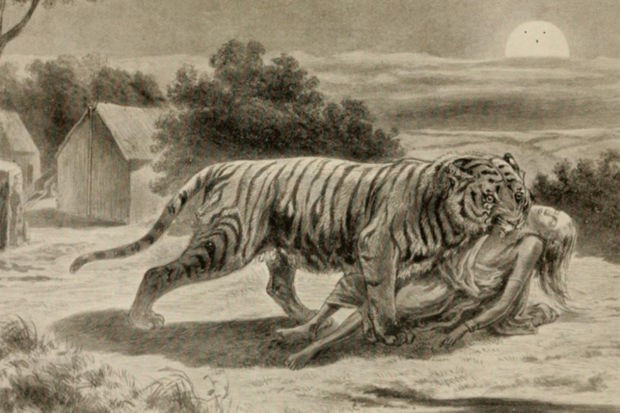 The man was Jim Corbett, whose books inspired me to take the opportunity I had to hunt and kill a man-eating tiger myself.  In 1961 at age 17, I traveled by myself to South Vietnam, where the tribal people in the highlands were defenseless against a tiger with a liking for human flesh.  One in particular had killed and eaten at least 20 Ko Ho Montagnards.

I got lucky and was successful in putting an end to his feasting on human beings. 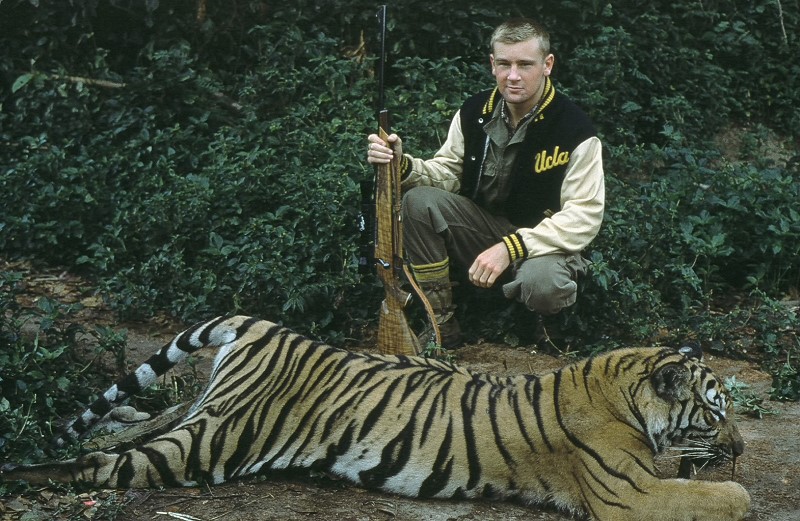 Having an experience like that changes you forever.  For over forty years now, my goal has been to give other people life-memorable experiences that will stay with them forever – and yes, without killing tigers.

I do this through my company, Wheeler Expeditions.  I hope you enjoyed The Route to Everest last week, and The Route to Kanchenjunga this.  Next week will be The Route to Annapurna. That’s in regard to our signature expedition, our Himalaya Helicopter Expedition.

I’d like to invite you to sign on to get advance notice of our Wheeler Expeditions we’ll be running.  We’re doing a lot this year, with my sons Brandon and Jackson with me.  I hope that one rings your bell and that we’ll have an adventure together soon.

It’s been a wonderful week.  Not every one to come will be as glorious, so revel in this one and let the feeling linger.  Then gird yourself, for we’re still in a knife fight to the finish.  We’ll have Mike Ramirez show us how it will end with two of our adversaries in particular. 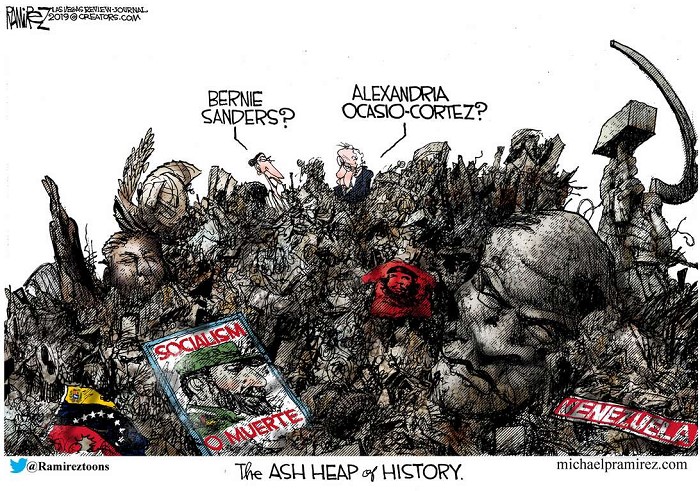