How cold is it?  It’s so cold that, the New York Post joked about “AOC “(Alexandria Occasional-Cortex)  on its cover yesterday (1/31):

It’s so cold that this morning’s headline (2/01) is for real:  Lake Michigan Has Completely Frozen Over.

Nonetheless, Occasional-Cortex and her Fascicrat ilk went bananas in rage (is there any other emotion they feel?) when POTUS made fun of their religion:

Yet their demented Warmist fanaticism is merely one path of many in their descent into madness this week, in which Democrats have become a party of Psychotic Fascism.  No longer a political party but a criminally evil gang bereft of any morality, just thuggish hate and lust for fascist power.

The question of the moment then becomes:  What will the President do about this in his State of the Union Address four days from now this Tuesday (2/05)?

Warmism, as TTPers know, is a political agenda, not a hypothesis of real science with almost all scientist-advocates bought off with government funding.  It is merely the replacement of a failed Marxism as the principal rationale of the Left to seize control over everyone’s life.

That’s why all Fascicrats like AOC keep banging their Warmist drum in our faces, infuriated that the public at large ignores them or looks right back at them with a bemused stand-your-ground smile like Nick Sandmann.

So the President makes fun of them like Chicken Littles screaming the sky is falling, and will leave it at that.  But he simply must address the Nazi Gestapo terror being committed by Robert Witch Hunt Mueller.  Here’s what this fascist thug perpetrated a week ago (1/25), described as “An American Nightmare” by Judge Andrew Napolitano:

“Last Friday, on a quiet residential street at 6 in the morning, the neighborhood exploded in light, noise and terror. Seventeen SUVs and two armored vehicles arrived in front of one house. Each vehicle had sirens blaring and lights flashing. The house, which abutted a canal, was soon surrounded by 29 government agents, each wearing military garb, each carrying a handgun and most carrying high-powered automatic rifles.

In the canal were two amphibious watercraft, out of which more heavily armed government agents came. Circling above all this was a helicopter equipped with long-range precision weaponry and high-powered spotlights.

Four agents approached the front door to the house. Two held a battering ram, and two pointed their rifles at the door. One of the agents shouted and banged on the front door until the terrified owner of the house emerged, barefoot and wearing shorts and a T-shirt. He was greeted in the dark at his open front door by two rifle barrels aimed at his head.

This was not a movie set; it was not a foreign city in a war zone; it was not the arrest of the Venezuelan opposition leader in Caracas. It was Middle America, Fort Lauderdale, Florida. The agents worked for the FBI, and the target of this operation was not a drug kingpin or a terrorist operative or a kidnapper of babies.

It was a peaceful American in his own home — a political operative and longtime friend of President Donald Trump’s, named Roger Stone.

Why were there more FBI agents sent to arrest Stone than Navy SEALs sent to kill Osama bin Laden? Why jackboots in the morning in America?”

To commit a purposeful act of Gestapo terror, that’s why.  The question, asked by TTPer Patricia McCarthy ereyesterday (1/30) is: “When Are You Going to Put an End to This, Mr. President?”

The SOTU (State of the Union) address to Congress and the nation, coming right on the heels of Mueller’s terrorism, gives President Trump the perfect opportunity to do so.  My hope is that he will announce something like this:

“Mr. Mueller’s jackboot raid on the home of a peaceful American citizen was a straightforward act of terror worthy of the Gestapo and completely unworthy of America.  It is the last straw of his witch hunt effort to uncover a non-existent collusion between my campaign and Russia, and to cover up the real collusion, that between the Clinton campaign and Russia.

I therefore have instructed the Department of Justice to, as of today, cease all funding of the Special Counsel’s operation.  Two years, countless millions, and jackboot Gestapo raids are enough.  He is to finish his report and issue it with the money he has at hand.  No more money for Gestapo tactics.  That is over.”

This is what he should say, indeed what he must say to end this fascist abomination.  Will he next Tuesday?  He may never have a better opportunity handed to him on a golden platter.

And what will the President say about an even greater nightmare of evil, described in TTP today (2/01) as “the greatest moral disgrace in American history” by Michael Walsh in “The Devil Has the People by the Throat and Wears a Pussy Hat on His Horns.”  It is the must-read of the week.

The nightmare was discussed in last week’s HFR:

“Here’s the headline, replete with a crowd cheering their governor:  Gov. Cuomo Signs Bill Updating New York’s Abortion Law.  That was on Tuesday (1/22), to celebrate the 46th anniversary of Roe v. Wade.

Read Shocking Facts about New York’s Radical Abortion Law – you may want to throw up.  It really is No Different than Infanticide.”

And yet this week it got worse.  The Democrat Governor of Virginia, Ralph Northam, publicly advocated post-birth abortion.

And in the ensuing backlash, he had the effrontery of the typical Democrat to find criticism of him “disgusting”!

So – if post-birth abortion becomes legal in Virginia (the bill is currently suspended or “tabled” by the state house GOP), does that mean it will be fully legal to post-birth abort – i.e. murder in cold blood – pro-abortionists like Virginia Governor Ralph Northam?  Or anyone else who says killing live-born babies should be legal?

There cannot be clearer evidence than the advocacy of infanticide that Democrats are psychotic fascists.  Worse – they celebrate infanticide.  Cuomo ordered the World Trade Center spire and Tappan Zee bridge lit up in pink in “celebration of the historic victory” of the infanticide bill’s passage. 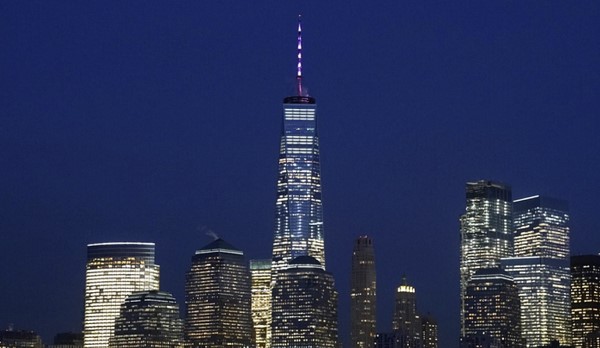 America had to fight a Civil War to end the evil of slavery.  Must we now fight Civil War II to end slavery’s modern equivalent of abortion?  Note in both cases, advocates and defenders of slavery and abortion were/are Democrats.  Dems need to be fully aware that Pro-Life Americans own many orders of guns & ammo than Pro-Abortionists.  The day may arrive when the former will place a bounty on the latter.  Especially Andrew Cuomo.

It’s being reported today (2/01) that POTUS will deliver a major Pro-Life message in the SOTU, specifically denouncing New York’s infanticide law.  He can do so because he knows revenge is soon to come.  The reason? 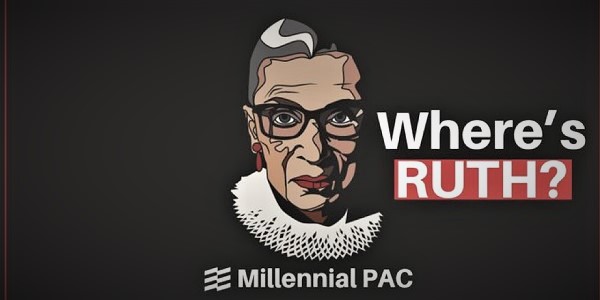 Nobody knows. Not even if she’s still alive.  Think she’ll show up with her fellow Justices at the SOTU?

In any regard, she’s not long for this mortal coil if she hasn’t left it by now.  Then it’s Hello, Justice Amy Coney Barrett.

Already, the baby killers are running scared as is.  Have fun reading this Wednesday (1/30) fright story by the libtards at Glamour: It’s Happening: A Case That Could Seriously Undermine Roe v. Wade Is Before SCOTUS.

Meanwhile, Fox reported yesterday (1/31) that Kneepads Harris and Chinese Feinstein are “fuming” mad that POTUS insists on nominating three conservative judges for the 9th Circuit.  That will flip the most ludicrously leftie court in the country.

Lindsay Graham responded to their hissy fit by saying so what?  “We’re getting Trump’s Ninth Circuit nominees confirmed,” he told them no matter what.

Speaking of Senator Kneepads, aka Heels Up Harris, and the most repulsive Dem in Georgia who’s giving the Dem Rebuttal to the SOTU (no joke), the eagle eye of James Woods observed: 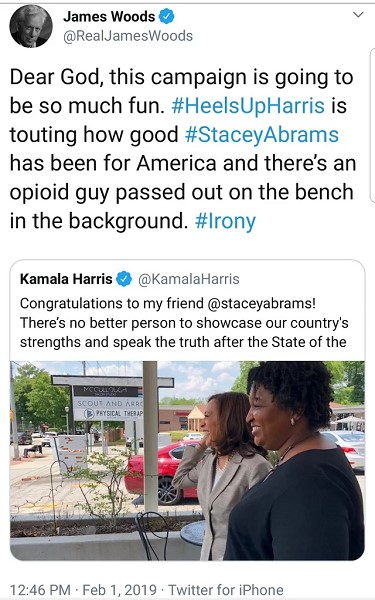 Of course, everyone is expecting POTUS to make our day during the SOTU by announcing he’s going to fund building the Wall without Congress Fascicrats getting in the way – either by declaring a National Emergency or, per Rep. Andy Biggs’ (R-AZ) suggestion on Monday (1/28):

“The president probably is going to have to declare that [the border] is an active drug trafficking corridor pursuant to Title 10 of U.S. code, and if so, he’s going to have access to billions of dollars to build the wall.

Using Title 10’s statutory authority… Trump has the specific statutory power to deal with a specific problem on the border and to build border security infrastructure. No national emergency declaration necessary.”

So expect POTUS to give primetime SOTU focus on protecting the babies and borders.  Plus the economy of course.

Whatever will Stacey Abrams say now?

Time to draw attention away from DC and to two outstanding newly-elected GOP Governors.

Also yesterday, Florida Gov. Ron DeSantis Eliminates the Common Core Once and For All.

This awful public school curriculum was the brainchild of Jeb Bush when he was FL Gov.  Now it’s gone.  New GOP now, Jeb.

Finally, before we close, can’t resist this being The Meme of the Week:  A Message to Democrats 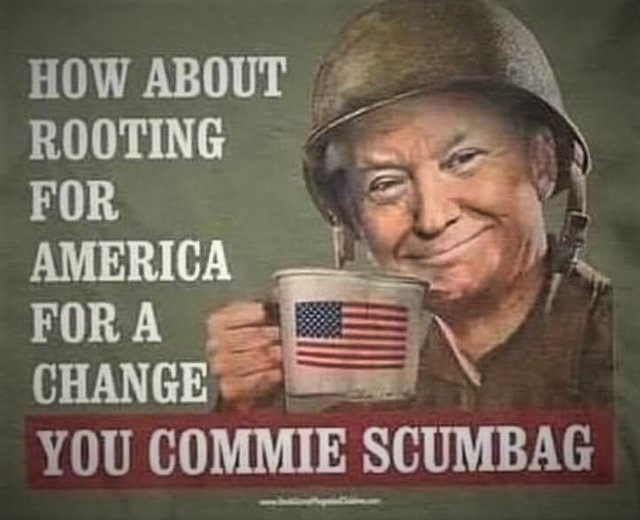 We close wishing you a fun Super Bowl Sunday.  Personally, I’m rooting for Brady to win his 6th Super Bowl ring.  He’s already the greatest QB in the history of football and this will clinch it.  And I’m rooting for him to give the bird to all those haters who envy his success.

I only have nostalgia for the Rams.   As a young boy in the early to mid-50s, I got to go to all the games in the Coliseum as my Dad was friends with Norm Van Brocklin, the Rams’ QB.  He was my hero, along with Tom Fears and Elroy “Crazy Legs” Hirsch.  More than once, Mr. Van Brocklin came over to our home, and threw me passes on our front lawn.

The Rams have never been the same since.  SB LIII will be Tom Brady’s 9th Super Bowl.  He won his 1st, SB XXXVI in 2001 – against the Rams, then in St. Louis.  Even though they’re back in LA, I’m betting on Brady to win the rematch 17 years later.

Besides, who could root for a team this Un-American?  LA Rams Say They Might Skip White House Visit If They Win.  Go Pats! 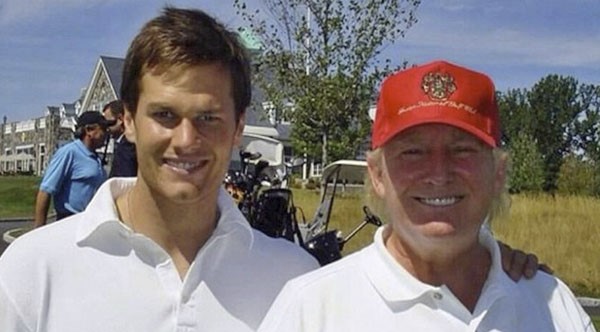