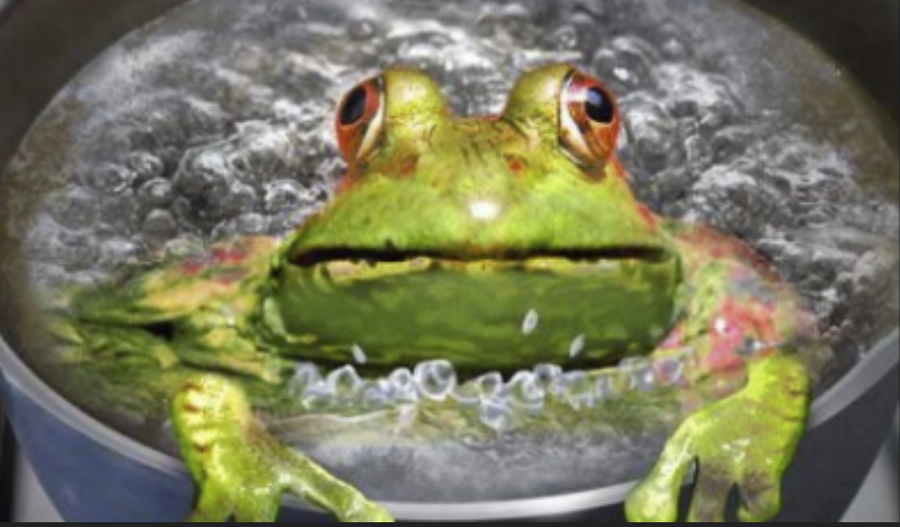 Is it true that if you put a frog in a pot of cool water and very slooowly heat up the water, he won’t notice until he’s boiled to death?   Turns out, it may well be.

Modern scientists of today dismiss it as a fable – without, however, never having performed the rigorous experiments on real live (then subsequently dead) frogs like serious scientists did in the late 19th century and not refuted since.

See the definitive 1888 report by eminent MIT biologist William Thompson Sedgwick (1855-1921), “On the Variation of Reflex Excitability in the Frog induced by changes of Temperature” (scroll to text page 388).

What happens is, as the water is slowly heated (about 2°F per minute) to not much above 100F (or 40C), the frog’s muscles stiffen, eventually paralyzing him so he can’t jump out if he wanted to as he’s “boiled to death” (actually at a temperature well below 212F/100C).

No matter the disagreement, there is universal acknowledgement that if water a frog is in gets too hot too quickly, he wastes no time jumping out of it muy rápido. Which is why the frog-boiling metaphor is so useful as that’s just what us humans do too.

For that’s just what FPX’s Fubar Fascism has done in first few days of his impostor occupancy of the White House.  He tried to boil us American frogs waaaay too fast – including lots and lots of seriously ticked-off Dem union workers.

Most of you may recall NFL quarterback-turned-GOP Congressman Jack Kemp (1935-2009).  He was a dear friend of mine, whom I heard in many a speech of his say, “People don’t care what you know if they don’t know you care.”

What everyone in America knows about President Donald Trump, save only for his maniacal detractors, is how much he deeply cares for all of us, poor or well-off, working or middle class, white, black, brown – We the People as opposed to our Ruling Elite.

And now, what everyone in America knows about FPX, along with the Ruling Elite, is that neither he nor they could care less about us, We the People.

They knew it before, which is why this happened – as Newsmax’s Greg Kelly showed last night (1/27):

Still, it’s hard to grasp the sheer brazenness of FPX’s couldn’t-care-less-about-people fascism.  We know his first act upon infesting the Oval Office was to kill the jobs of 11,000 Keystone pipeline workers.  Here is one of them.

I have to say his short selfie clip hit me hard.  It viscerally hit me how much damage was done to normal decent people’s lives on this evil thieving fascist bastard’s first day – how much life-ruining damage is he going to commit every day now for years on end???  To millions of people just like this, to our entire country???  This made me sob in grief – you may have a breakdown too:

Here’s what I’m scared of.  It’s the answer to the question, “If this and so much like it has happened in the just first few days, how much more can people stand week after week, month after month, before they snap?”

Yesterday’s (1/27) Daily Mail headlined this story: Terrified Members of Congress Demand Funds to Hire 24-Hour Armed Guards for Their Homes. (Note the DM today changed the headline – just look at the URL or put your cursor over the link to see the original.)

Yes, they damwell better be scared out of their minds – and out of their office.  Better to quit, resign before an enraged constituency comes after you with torches and pitchforks.

So far so good, as long as the enragement remains peaceful.   I can easily envision an Occupy Washington movement so massive in physical numbers it shuts down normal operations (by blocking entry) of Congress, Fed Agencies, and the White House.

Wonderful – problem is, the fascisti will insert agent provocateurs committing violence as they did on Capitol Hill Jan 6th.

Further… when people snap, it’s deuces wild, too many variables, the outcome is unpredictable.  This will be grossly exacerbated by the fascisti conducting a false flag faux-hit on FPX. Then it’s SHTF on steroids.   Federalie Fascism completely amok. Outright secession of multiple states.  Millions fleeing fascisti states. Millions trying to leave the US entirely for a place more peaceful and safe.

It’s a future we don’t want and must try to avoid without surrendering to the evil Ruling Elite.  But how?

The answer is, we don’t know, but that we must work together to discover the way as events unfold.  That’s why TTP is here now.  We – the TTP Family – must find ways to break free of America’s Nightmare that has only just begun.

So let’s talk about what to do now.

As we know, POTUS has no intention of starting a Third Party, but intends a hostile takeover of the GOP Elite instead. How do we help him?  We can start now, why wait to 2022?

Let’s begin with the 19 states that allow recall elections. And with the 10 House GOP Dirtbags who voted to impeach POTUS last week. Both include: David Valadao-CA, Adam Kinzinger-IL, Peter Meijer & Fred Upton-MI, and Jamie Herrera-Beutler-WA.  Recall petitions need to be started in all.

Then there’s Georgia, who needs to recall and get rid of treasonous Gov. Brian Kemp and his SecState Brad Raffensperger – and Arizona’s Gov. Doug Ducey – all complicit is assisting their states’ election theft.

How about Traitor Mitch, who on the floor of the Senate proclaimed, “The mob was fed lies. They were provoked by the president”? Or Liz Cheney and the remaining impeachment-voting dirtbags?

Mass peaceful – peaceful! – civil protest at their homes and state capitals until they resign is the answer.  Just look at how Cheney’s popularity has disintegrated since last week’s vote: 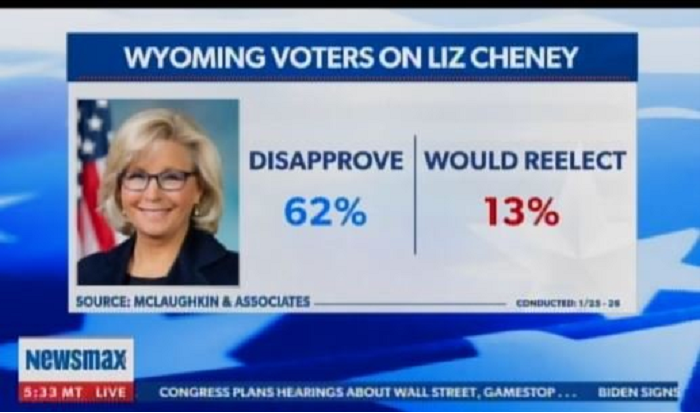 This is where to start – by helping POTUS’ takeover of the GOP now.  For guidance on Organizing A Mass Uprising (OAMU) in your area, see Dale Woolridge’s on-going series on TTP.  Also consider joining the Understanding The Threat organization, recommended by TTPer Rockymount.

Another principal cause of PDJT’s is to disenable the Dems (and GOP Govs bought off by the Chinese like Ducey and Kemp) from mass election fraud again.  There are many necessary conditions here, too many to enumerate.  Let’s focus on something you can do.

All Dominion Voting Machines responsible for the Nov 3 election theft have an audit trail in their software providing a record of who voted for whom.  This by federal law is a public record in a federal election.  Yet they have never been made public, particularly in the six key swing state counties that gave FPX the election, like Maricopa AZ and Fulton GA .

That’s because the crooks who rigged the votes deleted the audit trails – which is a federal felony of election tampering requiring years in federal prison.

Tom Fitton of Judicial Watch is the best there is on our side at successful FOIA requests.  The Dems will stonewall, but Fitton can get a Trump-appointed federal judge to order the Dominion audit trails released as legally required.  Then will come the admission by some Dem (or GOP in GA/AZ) operative that they’ve been deleted.

At that point, any Red County DA in the relevant state can criminally prosecute those who so admitted – and get them to rat on the party higher-ups who ordered the destruction of the audit trails in a plea bargain.  Then all of the election theft crooks can be sent to jail.

What can you do?  Fitton has been advised of this, but you can help by asking him to issue a FOIA request of the public record audit trails of the Dominion Voting Machines in the critical swing states of the Nov 3 election. Just email Tom at [email protected] – or call and leave a message for him at 888-593-8442.

It could be your good deed for America today.

Want to do something else fun and cool?

Michelle Steel, newly elected to CA-48 in Congress, is now on the House Education Committee. Rebel and I have known Michelle and her husband Shawn (former Chairman of the CA GOP) for way over 30 years.  Confession: I have known Shawn since he was with me in Youth For Reagan in 1966!

Click on the committee link to see how cool some of her colleagues are – like Marjorie Taylor-Greene who filed for FPX’s impeachment, which has the Dem fascists setting their pussy hats on fire so much they demand she be expelled from Congress!

So I am now bugging Shawn and Michelle that she enter a bill to eliminate – as in zero out, gone, extinction like the Soviet Union – the US Department of Education, for which there is absolutely no enumerated power constitutional authority for its existence.

It’s the single greatest contribution she and her fellow members of the Education Committee could make for constitutional freedom.  Email Michelle at https://steel.house.gov/contact.  Be sure and tell her you are a friend of Jack Wheeler.  Have fun!

One important point to stress before we close.  And that is the Fascist Secular Religious Cult of “Climate Change” as a replacement for outright Marxism as a rationale for totalitarian control of everyone’s life.

That’s what the Dems are trying to perpetrate, as they only care about power, not a whit about people.  On Wednesday (1/27),  FPX issued another of his satanically depraved EOs: “EO to Create a Civilian Climate Corps to Fight Climate Change.”

If this is attempted in your area, please consider organizing against it to ridicule, laugh at, make fun of, and point out its utter insanity.  If you need talking points, just ask – TTP is here to help.

Bottom line this week: given the mentally ill circumstances, things are going in a good direction with everything going crazy too fast.  It means this evil insanity may be over quicker than we think – but that we must have patience because it won’t be tomorrow.

Finally, something to enjoy and contemplate over the weekend.

80 years ago in 1941, Frank Capra made a movie starring Gary Cooper and Barbara Stanwyck, Meet John Doe.  I chanced upon it this week, and was struck by how Cooper’s character – even though a derelict not a billionaire – compared to PDJT demonized by Uniparty politicians and a villainous Big Media, while recognized by normal people as a savior from them.

As it ended, I thought, this is a movie that may resonate with every TTPer.  So here it is entire – let me know on the Forum.