Welcome to the Macbeth HFR.  You just watched Sean Connery as Macbeth in the famous soliloquy of Act V Scene V, reciting what is now the theme song of the Pelosi Democrats sworn in to the 116th Congress yesterday (1/03).

Theirs is indeed, “A tale told by an idiot, full of sound and fury, signifying nothing.”

Tomorrow, and tomorrow, and tomorrow,
Creeps in this petty pace from day to day,
To the last syllable of recorded time;
And all our yesterdays have lighted fools
The way to dusty death. Out, out, brief candle!
Life’s but a walking shadow, a poor player
That struts and frets his hour upon the stage
And then is heard no more. It is a tale
Told by an idiot, full of sound and fury
Signifying nothing.

Hold on to these words as you see the Dems strut and fret their hour upon the stage of Capitol Hill.  Their lives are but walking shadows lit by a brief candle, from whom we will hear no more soon enough.

They really are idiots, no hyperbole, genuinely mentally retarded like Hank Johnson (D-GA), who repeatedly compared the President of the United States to Hitler in a speech on Tuesday (01/01).  This is the retard, recall, who in a congressional hearing in 2010, said the island of Guam could “tip over and capsize” due to overpopulation.

The ideal temperature to serve draft beer is around 40°F, no warmer.  Johnson’s IQ cannot be much higher than that.  Same with the voters of Georgia’s 4th CD, who have elected him seven times from 2006 to last November.

Or how about Rashida Tlaib?  At 42, she’s never had a real job much less had a business in her life, having been with the Michigan state legislature or a social worker since leaving school.  Yesterday (1/03) she was sworn in as Congress’ first Moslem woman Palestinian terrorist-advocate.  She hates Trump as much as she hates Jews, announcing to wildly cheering libtards, “We’re going to impeach the [expletive].”

You can’t get a textbook example of “sound and fury signifying nothing” better than that.  Or that hubris leads to self-destruction.  The more Pelosicrats waste their time on impeachment votes and socialist spending bills that McConnell won’t even bring to the Senate floor, the better.  Nothing could more unify Trump’s base and widen it.

Which brings us to 3B.  “Three B” – that’s shorthand for the #1 idiot of the sound-and-fury freshmen Dems, the Bug-eyed Brainless Bolshevik herself, Alexandra Occasional-Cortex. 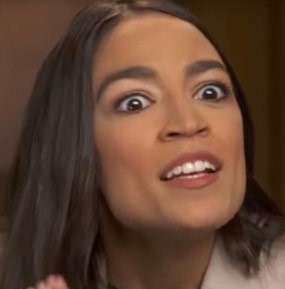 3B – the Bug-Eyed Brainless Bolshevik

Watch the drama unfold as Pelosi’s dementia worsens – she even botched her Speaker acceptance speech yesterday.

As it worsens, enjoy 3B’s challenge to replace her as Speaker, with civil war breaking out between the rabid fascisti of the young and the milquetoast fascisti of the geriatric old guard.

It’s a war both sides will lose as the Dems all descend into an abyss of irrelevancy, screaming their hate-filled invective at our President, at America, and at each other all the way down.

The above items demonstrate the irony of Patricia McCarthy’s A Curse of Democrats this week (01/01) – with the Dems as they turn Radical Left running the House now, they are not only a curse on America but a curse on themselves.  That said, their curse on patriots and normals is going to get worse.

Two examples.  David Horowitz on Monday (12/31) observing that “The Media Never Cares When Americans Are Killed by Illegal Aliens.” 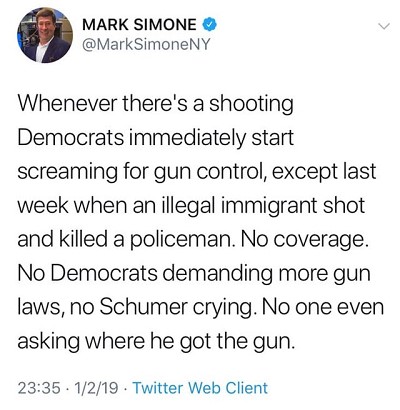 Here’s the solution.  We start with Schumer, Pelosi, 3B and that Tlaib woman:

Second example: the next level of Leftist Fascist-Nazi homicidal violence. On Wednesday (01/02) – Threats to mass slaughter customers and employees of restaurants who serve people they hate, like Michael Savage.

This is vile beyond words.  Warning:  it’s going to spread and get worse.  Quickly we will be given no choice but to fight back.  There is this classic meme against gun control: 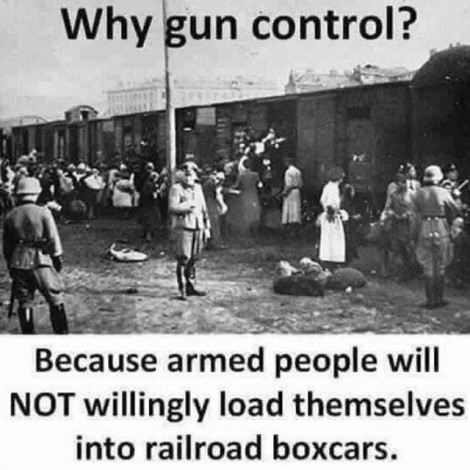 Germany had no Second Amendment preventing Hitler from disarming Jews.  Today for America’s Fascist-Nazi Left, Whites are the New Jews.  But frankly, being armed is not enough.  You have to be willing to use your arms to defend your freedom.

Private American citizens are the most well-armed people on earth, in complete contrast to the defenseless Jews holocausted by Hitler.  We have the chance and choice to preserve and protect our freedom the Jews never had.  Will we take that chance and make that choice when it becomes necessary?

We should be under no illusion whatever that it is the express goal of the Left in America to kill or enslave us.  That’s clear now and will become ever more blindingly so with the House Dems embracing fascism.  Let’s pray the Dems will now destroy themselves before we have to physically put the Second Amendment to the purpose for which it was intended. 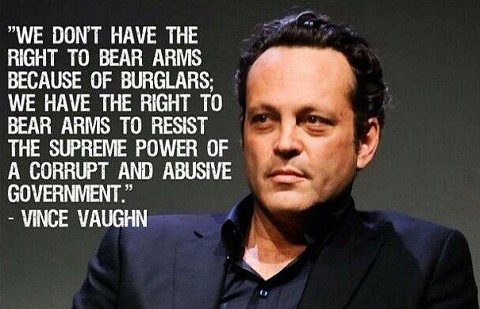 Patricia McCarthy says the collective noun for Democrats should be a “curse.”  Couldn’t be more apt.  Collective nouns are cool, like a murder of crows, a bouquet of pheasants, an ostentation of peacocks.  It’s a pride of lions, a leap of leopards – and I’m suggesting to Patricia that a crash of rhinos be aptly applied to RINOs.

Particularly since the Crash of the Week was Romney the RINO.   Sore Loser Mitt got immediately blistered by his fellow GOP Senators like Lindsey Graham, while pundits like Lou Dobbs called him a “treacherous fool.”

Certainly Mittens’ wholly gratuitous attack on Trump’s character in WaPo on New Years’ Day was monumentally foolish.  Why would he do this, because he’s not stupid.

It’s because his character is the problem, not POTUS’.  His character flaw is a penchant for self-sabotage.  It runs in the family.  His father, George Romney (1907-1995), was a very successful businessman then Governor of Michigan (1963-1969).  Smart, charming, tall, handsome and popular, he was the front-runner for the 1968 GOP Presidential nomination.

Until one single word did him in.  On September 4, 1967, he was asked in a TV news broadcast why he had changed his position from support to non-support for the Vietnam War.  He replied he had been “brainwashed” by US generals in Vietnam two years prior.  Media frenzy ensued and his candidacy went down in flames.

All his life, George’s son wanted to achieve what his father was denied – the presidency.  And yet, deep down he felt he could never be as good as the father he worshipped.  That cognitive dissonance drove him straight into Self Sabotage City. It will take this freshman senator a while to recover, if ever.

Let’s go international for a moment.

Iran.  On Sunday (12/30), the Majlis (Iranian Parliament) research department warned that hyperinflation will ruin Iran’s economy before the end of March.  Actually before March 21, the Iranian New Year or Nowruz.  Trump’s sanctions are working.

“Shanghai’s stock benchmark ended 2018 as the world’s worst market performer for a second year, falling 24.6 per cent over 12 months as an unprecedented trade war between China and the United States weighed on the Chinese economy and crimped corporate earnings.

Worse is still to come, as the full impact of the trade war takes time to work its way into the corporate accounts and household budgets in the world’s second-biggest economy. Growth could slow to 6.2 per cent in 2019, which would be the weakest annual clip in almost three decades, according to a Nikkei survey of 32 economists.

To underscore the bleak outlook, the latest statistics from mainland China showed November’s industrial profits falling for the first time in nearly three years, while the growth in retail sales slowed to a 15-year low.”

Notice how that this is the doing of our POTUS-VSG (Very Stable Genius) is acknowledged.  Winning!

It’s a shocker since AMLO (Andres Manuel Lopez Obrador) is a radical leftist, yet his Tax Incentive Decree for the Northern Border Region of Mexico dramatically reduces taxes, doubles the minimum wage, reduces government regulation for the express purpose of job creation and  investment “to provide an incentive for Mexicans and other migrants to remain working in Mexico.”

Sounds like Obrador has been taking Trump lessons in Maganomics.  As TTP has been saying for many years, the best solution for illegal immigration is for Mexico to have a booming economy so that its people want to stay in their own country.

Brazil. The biggest global news of the week is the inauguration of Jair Bolsonaro as President of Brazil on Tuesday January 1st.

In his inaugural address, he declared his election “liberates Brazil from socialism and political correctness.”  That children would no longer be taught “the ideology of gender” but “respect for our Judeo-Christian tradition,” and “be prepared for the job market, not political militancy.”

Within 24 hours after his assuming office by donning the presidential sash, he ordered the firing of all “Communist” bureaucrats in his government, while his human rights minister Damares Alves announced that “LGBT concerns” were no longer responsibilities of her ministry:

Bolsonaro’s tweets are in Portuguese, but on Wednesday (1/02), he made this clear to the world in English:

Brazil is the 5th largest country in the world at 210 million people, and in area (3.2 million square miles).  It has the world’s 8th largest economy, and is the 800 pound gorilla of South America.  Now it has a president who admires President Trump (and vice-versa), who intends to have a Trumpean economic and foreign policy. Brazil is now America’s (and Israel’s) ally and friend.  This is a Big Deal.

Jair Bolsonaro, “The Trump of the Tropics,” is the HFR Hero of the Week. 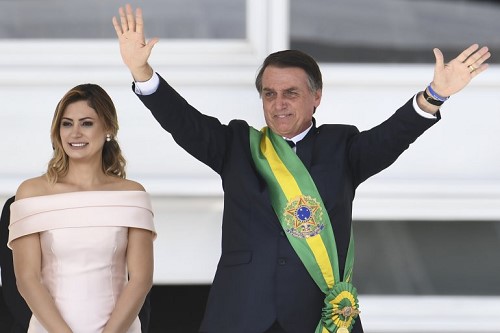 Back to our shores.

Funniest News of the Week: Women’s March Event Canceled over Concerns of Being ‘Overwhelmingly White’.

Now let’s take a look at this picture:

Where’s RBG?  Not there – because she won’t be on SCOTUS for much longer.  Soon, with her Amy Coney Barrett replacement, it will be a 6-3 court on our side.  Which is why Fox’s John Yoo is a must-read:  2019 Could Be an Incredible and Historic Year for the Supreme Court – Here’s Why (Monday 12/31).

He reveals how this term’s Gundy case can reinstitute the nondelegation doctrine: that Congress cannot authorize agencies to pass rules that legally bind the public in its stead.

That this term’s case of Kisor v. Wilkie can end “Chevron deference” requiring federal judges to defer to agency interpretations of ambiguous statutes and regulations.  There’s more – must read.

Okay – we come to the end of the Inaugural HFR of 2019.  We’re off to a fabulous start.  Here’s the huge banner headline on Drudge today: 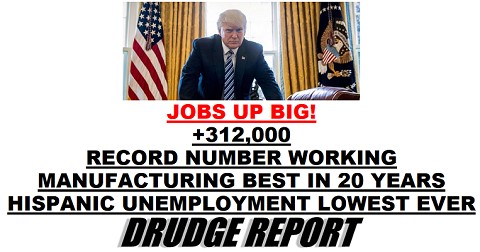 MAGA, baby!  The key to a MAGA 2019 for POTUS:  ignore all House Fascicrat investigations and subpoenas, act as if they don’t exist with the President’s administration being coequal with Congress unless ordered otherwise by SCOTUS only, no lower court libtard judge ruling.

POTUS is off to a terrific start today (1/04), telling Chuck the Schmuck he’s willing to keep the current shutdown for months or years  and declare a national emergency to build the Wall without him unless he caves.  Coming out of the White House, this is the look of a defeated man: 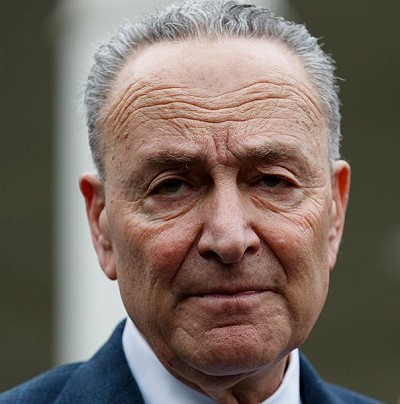 This is the look of a triumphantly confident man in the Rose Garden press conference today: 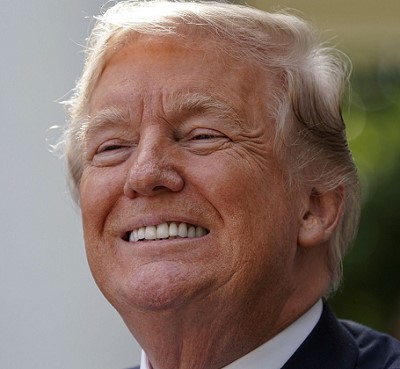