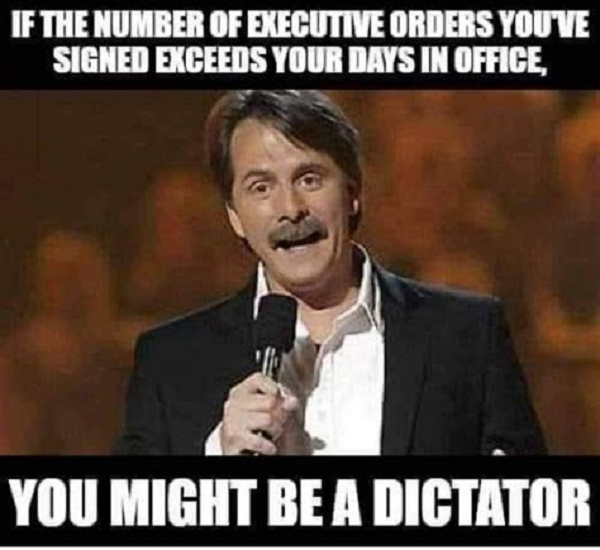 How about over 3 times as many?

As [FPX] issued 52 executive orders and actions in his first 16 days in office, Republican attorneys general in the states appear poised to be the strongest check on overreach by the federal government.

“Everything is fair game. We are going to defend the Constitution of the United States and look out for the best interest of our states,” Georgia Attorney General Chris Carr, chairman of the Republican Attorneys General Association, told me in an interview.

“It’s not just lawsuits, but also working with members of Congress,” Carr said. “And we will try to work with the administration.”

Montana Attorney General Austin Knudsen led 13 other attorneys general Tuesday (2/09) in calling on [FPX] to reconsider his first-day revocation of a permit to construct the Keystone XL oil pipeline from Canada to Nebraska.

Knudsen advised him that states are reviewing legal options to “protect our residents and sovereign interests.”

“Your decision will result in devastating damage to many of our states and local communities. Even those states outside the path of the Keystone XL pipeline—indeed all Americans—will suffer serious, detrimental consequences,” Knudsen and the other attorneys general wrote directly to FPX, adding:

“In Montana, for instance, killing Keystone XL will likely cost the state approximately $58 million in annual tax revenue. Montana will lose the benefits of future easements and leases, and several local counties will lose their single-biggest property taxpayer. The loss of Keystone XL’s economic activity and tax revenues are especially devastating as five of the six impacted counties are designated high-poverty areas.”

FPX also signed executive orders to change other aspects of immigration policy, including stopping construction of the border wall. An executive order itself isn’t grounds for litigation until the government implements the action.

Pressuring the federal government to enforce its own laws will be one goal for the Republican Attorneys General Association, says Missouri Attorney General Eric Schmitt, vice chairman of the group.

“He’s not enforcing immigration laws,” Schmitt says of FPX. “His idea is to make it easier to come here illegally. The policy of not enforcing the law, we have a hard time wrapping our minds around that.”

Attorneys general from West Virginia, Arkansas, Indiana, Mississippi, Montana, and Texas already have issued a formal warning to the OVO (Oval Office Occupant), making it clear they intend to defend the First and Second Amendments to the Constitution.

“The growing and dangerous hostility to the free exercise of religion in recent years … is appalling,” says the letter to FPX from six Republican attorneys general, led by West Virginia’s Patrick Morrisey. “As a man of faith, we hope that you will ensure your administration accommodates and respects the free exercise of religion and complies with both the Constitution and the Religious Freedom Restoration Act.”

“The Second Amendment guarantees the right to keep and bear arms is part of the Constitution that your oath requires you to preserve, protect and defend. We are dismayed at your stated intentions to impose numerous limits and burdens on ownership of firearms. You can expect strenuous opposition from us against any such efforts.”

Republican attorneys general came of age as a national force during the Obama administration where FPX served as vice president, banding together to challenge policies such as the Affordable Care Act.

Although the Supreme Court upheld the constitutionality of the law creating Obamacare, the attorneys general helped topple certain aspects such as requiring all employers to cover contraception and abortion-inducing drugs, even if they objected on religious grounds.

Similarly, during the Trump administration, Democrat attorneys general routinely sued the federal government over policies such as immigration and health care.

Energy issues under FPX are emerging as a major focus for attorneys general, Georgia’s Carr says:

“The energy executive orders [FPX] has issued are moving America away from energy independence. The supply increase was driving down the cost of fuel. He is undoing those pro-growth policies and hitting people in the pocket. … The Keystone pipeline is of great interest to me as not only an attorney general but as a former commissioner of economic development. Killing it means killing 11,000 well-paid jobs.”

“America really achieved energy independence in the heartland.  His actions on energy don’t just affect jobs. It will make it more expensive to build roads and heat homes. … He wants to curb [carbon] emissions in the United States, but is not interested in holding anyone else accountable, including China.”

The FPX administration has requested that the litigation be halted.  It won’t be.  GOP state attorneys general are just gearing up for a torrent of litigation designed to block and reverse the emerging White House dictatorship.

Fred Lucas has been the White House Correspondent for several conservative media outlets.  He is the author of “Abuse of Power: Inside The Three-Year Campaign to Impeach Donald Trump.”