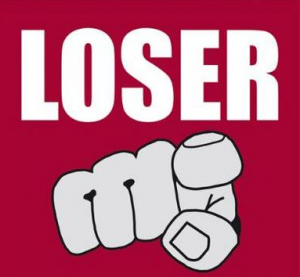 If you think that’s no big deal, you’re wrong. It’s a big deal. This is – literally – weapons-grade persuasion from the most powerful Master Persuader of our time.

President Trump’s clever nicknames for people are not random. They are deeply engineered for visual/auditory impact and future confirmation bias.

In this case, the visuals will be provided by future terror attacks. That reinforces the “evil” part, obviously.

But more importantly, the Losers! will be doing nothing but losing on the battlefield from now until “annihilation.” They are surrounded, and the clock is ticking.

Oh, and the press isn’t allowed to watch the final battles. In other words, we won’t need to build new holding cells on Guantanamo Bay this time. No press means no prisoners, if you know what I mean. Note: American soldiers won’t be shooting the prisoners. We have allies for that sort of thing.

As you know, “annihilation” of the Losers! in Loserdom won’t stop their ideas from spreading. You still have to kill the ideas. And that takes persuasion, not bullets. President Trump just mapped out the persuasion solution: Evil Losers!

Quickly, name one other way you could label/insult the Losers! that would be as powerful as the word Loser! You can’t do it with any other name or insult that is also repeatable in polite company.

What kinds of people join the Losers!? Mostly young males. And you know what brand young males do not want stamped on their foreheads?

If you call them monsters, they like it. If you call them ISIS or ISIL they put it on a flag and wave it around. If you call them non-Muslim, it just rolls off their backs because they have Korans and stuff. Almost any other “brand” you can imagine is either inert or beneficial to Loser! recruitment.

Loser! is different. No one joins the Loser! movement. Try at home, with your family or friends, to concoct a more effective brand poisoning than Loser! You probably can’t. Remember, your brand has to fit with future confirmation evidence.

The Losers! on the battlefield will continue to be losing, so the brand is engineered to get stickier over time. Your alternative idea for a brand solution has to have that quality of future confirmation too. Good luck finding a better persuasion brand.

This is not accidental. President Trump does (laugh if you will) have the best words, at least for this sort of thing. He’s proven it over and over. Just ask Marco, Jeb, Ted, and Hillary.

As a mental experiment, imagine the CEOs of the major browser companies, including Google, Apple, Microsoft, and the open source products getting together to stop the spread of Loser! propaganda.

They could collectively decide to program their browsers to auto-convert ISIS or Al-Qaeda or other cool terror names to Evil Losers, or just plain Losers! If all the browser products agree, that’s all your teenager Muslim in Europe will see as he tries to self-radicalize. That would, in time, end recruitment for Losers!

An hour ago you believed there was no way to stop the spread of the ideas behind terrorism. I just told you how to do it by the end of the week. While I don’t expect the browser companies to take my suggestion, I do expect some of you will realize for the first time how winnable the war of ideas is.

So long as your Commander in Chief is also a Master Persuader.

Otherwise you’re out of luck.

America, as it turns out, has lots of luck left in it.

You haven’t seen anything yet. We’re just getting started.

Scott Adams is the creator of the Dilbert comic strip – and says “You might enjoy reading my book because you are a winner.”