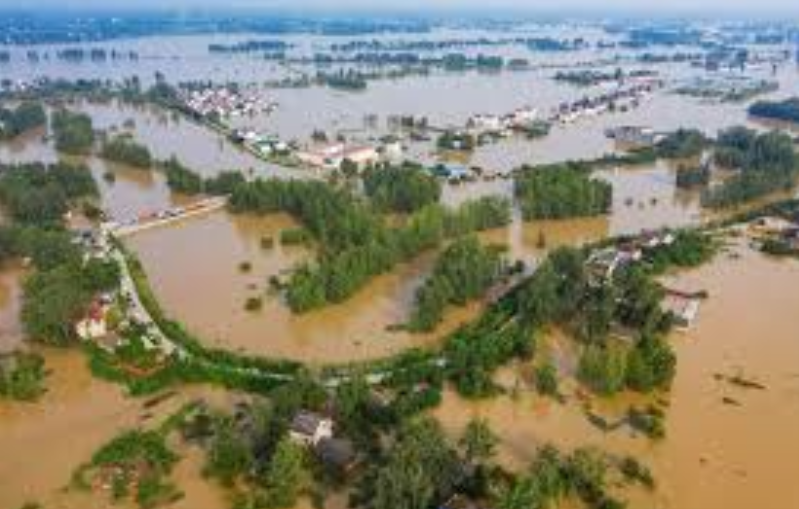 Flooded farmland as far as the eye can see

This has not been a good year for China.

The economy suffered a 6.8 percent economic contraction in Q1, followed by a 3.2 percent rebound (anemic by Chinese standards) in Q2. Relations with the United States remain tense and complicated.

On top of that, heavy rains have caused massive flooding that has wiped away billions of dollars of value in China, washing up factories, homes and agricultural land in a frothy tide of destruction. This last is important.

While China supports over 20 percent of the world’s population, it has a little over 12 percent of its arable land (according to the World Bank). Heavy rains and floods are bad enough; add in an African Swine Fever resurgence in some parts of southern China and the question of food security gains traction as something to watch.

Food, large populations and good governance are built into China’s history. Indeed, the national story has often been defined by a dynastic cycle in which the old order becomes corrupt, fails to maintain key infrastructure like canals and irrigation, and eventually is unable to keep public order or defend the frontier. The economy eventually fails as does support for the dynasty.

Famine, bandits and rebels add to the misery, eroding the old dynasty’s Mandate of Heaven. Out of the chaos a new leader arises, sets the wrongs right and founds the next dynasty. So the cycle goes.

The Communists are no strangers to famine. Mao Tse-tung’s Great Leap Forward (1959-1961) set out to rapidly industrialize China, but instead plunged his country into the Great Chinese Famine, which killed up to 55 million people.

The question is: does China face a similar situation now?

The scope of the food security problem facing China today is complicated and touches on a number of factors. Although China has considerable stocks of corn, rice and wheat, it remains dependent on imported soybeans and has a shortage of pork, a traditional staple.

African Swine Fever forced a major culling of the hog herd in China in 2019 and the 2020 floods have hurt efforts to rebuild them. And while China has diversified its sources of soybeans (to include producers like Brazil and Argentina), it is still dependent on imports.

China’s more aggressive “wolf warrior” diplomacy, as reflected in Beijing’s aggressive moves along the Indian border, South China Sea, as well as tetchy relations with three of its most important food suppliers (Australia, the U.S. and Canada) could be part of an effort to divert attention from domestic problems such as food insecurity.

This was a tactic used by Mao in 1962 in the aftermath of the Great Famine to divert attention away from domestic troubles to the borders, resulting in the Sino-Indian 1962 War.

While China’s persistent poking at India’s border over the last months has drawn attention, the August 26 decision to fire four “Guam Killer” ballistic missiles from the South China Sea raised tensions with the U.S., but also fits a pattern long used by Mao to start troubles outside the country while dealing with internal challenges.

The floods in the Yangtze River basin, the source of most of China’s rice, have impacted production and transportation and left behind a fair amount of land under water.

According to the China General Administration of Customs, China’s grain imports have risen by 22.7 percent (to 74.51 million tons) in between January and July as compared to the same period in 2019. Wheat and corn imports over the same period saw significant increases. The importance of grain imports is likely to last through the year.

China’s food production has also been hit by insects. According to the U.S. Department of Agriculture’s Foreign Agricultural Service, corn crops fell victim to an intense infestation of Fall Armyworm, a type of moth, in June.

The Yangtze River Economic Belt is both a strength to China and a weak point. The area is home to more than 40 percent of China’s population (about 600 million people) and accounts for almost 50 percent of export value and 45 percent of GDP (according to China Water Risk).

As Bloomberg’s Anjani Trivedi noted: “On its own, the region could be the third-largest economy in the world.” It could be said that, as goes the Yangtze River Economic Belt, so goes China. Rising population weight and over-urbanization make this a region that will increasingly be under the threat of flooding.

China’s consumer inflation accelerated to 2.7 percent in July from 2.5 percent in June, pushed along by rising food prices. This pressure has come from supply-side problems, which have been particularly evident in rising pork and egg prices referred to as “flying pigs” and “rocketing eggs.” These are two socially sensitive foods, which no doubt concerns the government.

There is also a looming possibility that Xi is about to launch a new purge of the party in anticipation of a more challenging economic landscape ahead as well as heading off growing dissent within the party over his policies.

Indeed, there is talk about a “rectification” campaign, a tactic used by Mao to purge his enemies within the party.

Is Communist China, then, heading into a Great Famine again?  Probably not, at least not right now. The Chinese authorities are keenly aware of historical developments and have little wish to lose their Mandate of Heaven.

On August 17, the Chinese Academy of Social Sciences predictably claimed that “there is no need to worry” when it comes to the country having enough food. However, it also warned that unless major agricultural reforms are made, China could face a “food shortfall” by 2025 if not before.

The driving forces behind this are an aging population and an ongoing movement of population to the cities which translate into a shrinking rural labor force. This takes us back to Operation Clean Plates.

The reasoning behind Xi’s initiative is tied to the need to start being smarter about food use. Simply stated, the more China has to import food, the more dependent it is on other countries. If food is weaponized, China’s growing reliance on food imports could reduce its ability to pursue certain policies, such as its moves to consolidate its position in the South China Sea and control over Hong Kong.

It could also put pressure on food prices, something that the Communist Party is sensitive over considering it was one of the factors that helped spark the Tiananmen Square demonstrations in 1989.

The Chinese government is bearing down on its population (through shaming people for eating too much and attacking the fad of binge eating) to preserve food stocks, make the Chinese people think about food as a precious commodity, and set the stage, if needed, for tougher measures to secure food supplies.

While thinking ahead is proactive, it has downside risk. One of the main promises made by the Communist Party to the Chinese people has been plentiful food. It can be argued that the Communist Party has delivered on meeting the basics of putting food on the table, personal safety and a place to live. Now it is signaling that food could be an issue in the future.

Slate’s Joshua Keating has observed: “People may vote with their pocketbooks, but more often than not, they revolt with their bellies.”

Scott B. MacDonald is the Chief Economist at Smith’s Research and Gradings, and a Senior Associate at the Center for Strategic & International Studies in Washington.