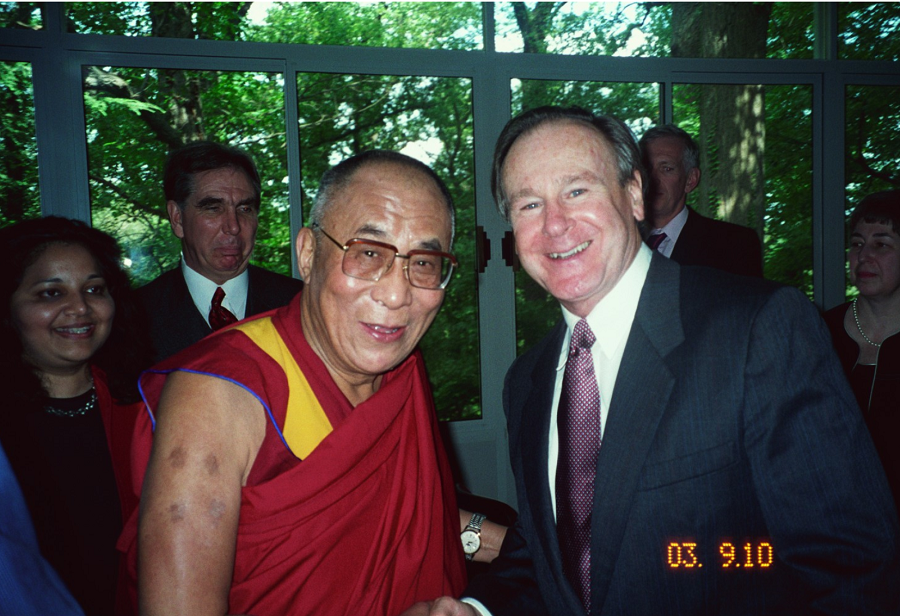 Eighteen years ago, October 9, 2003, I had the privilege to meet and have an unforgettable conversation with His Holiness the Dalai Lama. It was at a luncheon hosted by India’s Ambassador to the US at his residence in Washington. His Holiness loved my telling him how I had passed out over a thousand pictures of him during my three overland expeditions crisscrossing Tibet. “Illegally, yes?” he asked, as the Chinese make this a crime. “Oh, very illegally!” I answered as we both chuckled.

The Ambassador asked where he was born. His answer, “very remote village in far northern Tibet.” He was startled when I interjected, “Yes, I know, I’ve been there – I even bought a doonchen (telescoping 15 foot-long Tibetan prayer horn) in your village.” “A doonchen?” he exclaimed. “You mean…?” and put his hands to his lips to make this really loud WHOOOH like the horn makes. I nodded and did the same, WHOOOH. We belly laughed, while all the diplomats and Congressmen did not know what was going on.

Then he wrapped his hands around mine and I felt an electric energy run through my body. It was his blessing. I will treasure it all my life. (Glimpses of Our Breathtaking World #60 photo ©Jack Wheeler)