FIVE FEET AWAY FROM AN 800-POUND GORILLA 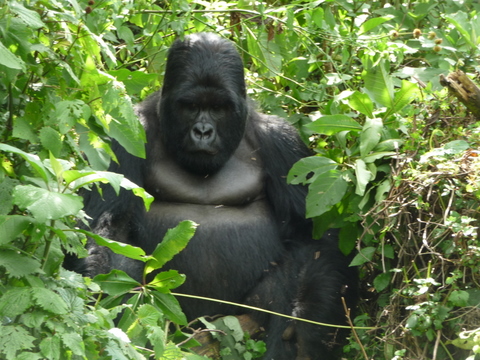 You know the adage about the “800-pound gorilla” going wherever he wants to – such as five feet from you in the Virunga Mountains of Rwanda. It is one of the world’s great thrills to be this close to these giants and feel at ease doing so. They are “habituated” to small groups of people whom they ignore. You of course are very quiet and do nothing to alarm them, just observing the little ones playing, mothers nursing, young ones climbing trees, huge male silverbacks watching over their families.

Gorillas are vegetarians, males eating up to 75 pounds of vegetation a day – thus they spend most of their waking hours chewing! The biggest silverbacks never get anywhere near 800 pounds by the way – 450 to 500 pounds at most (like the fellow in the photo). Big enough, believe me.

Rwanda is one of the best-run countries in all Africa. President Paul Kagame deserves the Nobel Peace Prize for healing his nation after the genocidal horrors of the 1990s. That’s far in the past now in this beautiful, peaceful land. (Glimpses of Our Breathtaking World #93 photo ©Jack Wheeler)