His Fraudulency Joe Biden’s attorney general has just announced that the FBI will be engaged to terrorize parents who oppose left-wing school board policies.

All around the country, parents have been speaking out and protesting against several absurd and destructive school board policies that have been put in place to damage, sexualize, and indoctrinate innocent children.

Chief among these policies is Critical Race Theory, which teaches children to be racists and that white people are inherently dangerous oppressors due to their skin color.

Now Joe Biden is deploying the FBI against parents who have concerns about Critical Race Theory being taught to their children.  As Senator Josh Hawley notes:

This is a remarkable and dangerous abuse of power

Parents are also opposed to anti-science mask mandates. Although nothing in the science supports the idea that forcing kids into filthy masks all day long does anyone any good, these fascist school boards are still imposing these mandates.

Then there’s the sexual nonsense, where kids are indoctrinated with a bunch of perversion about how men can magically transform into women, where kids (who are still minors) are taught about homosexuality and abortion and given sexual writing assignments.

Tragically, too many of the government-run schools in this country have become breeding grounds for mentally ill educators desperate to force their warped political agendas and neuroses on our children.

And now that parents have had enough, the same Joe Biden who just yesterday said that being harassed and filmed in a public restroom is “part of the process” of being an elected official (school boards are elected officials), is now unleashing his FBI Brownshirts on parents who have the audacity to want a say in how their child is educated:

Days after a national organization representing school board officials lamented to the Biden administration about “hate groups” intimidating education officials, Attorney General Merrick Garland has directed the FBI to combat “threats of violence” against administrators.

Without citing specific cases, in a memorandum issued on Monday, Merrick Garland expressed concern about a “disturbing spike in harassment, intimidation, and threats of violence against school administrators, board members, teachers, and staff who participate in the vital work of running our nation’s public schools.”

The critical thing here is that Biden does this without citing even one instance — just one — where someone was harassed or threatened.

Moreover, even if that was the case, this is not a federal matter. This is a local matter. Thus, the feds have no jurisdiction in local criminal matters.

But the goal here is obvious: to criminalize not only dissent and peaceful protest but to criminalize daring to disagree with the fascist, narcissistic left-wing maniacs who have seized control of government-run schools.

This is also about using the federal government to chill free speech, to scare and intimidate parents away from speaking out. And it will almost certainly be used to harass those parents who do speak up.

The other tactic here is that Biden is hoping to inflame the situation. Using the FBI in this unlawful and un-American manner is meant to anger and provoke people into misbehaving, which is what the fascist Biden regime wants.

Nothing would make Biden and the Hitler Youth at the FBI happier than an incident that would allow them to crack down even harder on everyday parents who don’t want their children taught to be racists.

Here is advice all parents in America need to take to heart:

Ron Paul explains why it is so important for parents to control the education of their children: 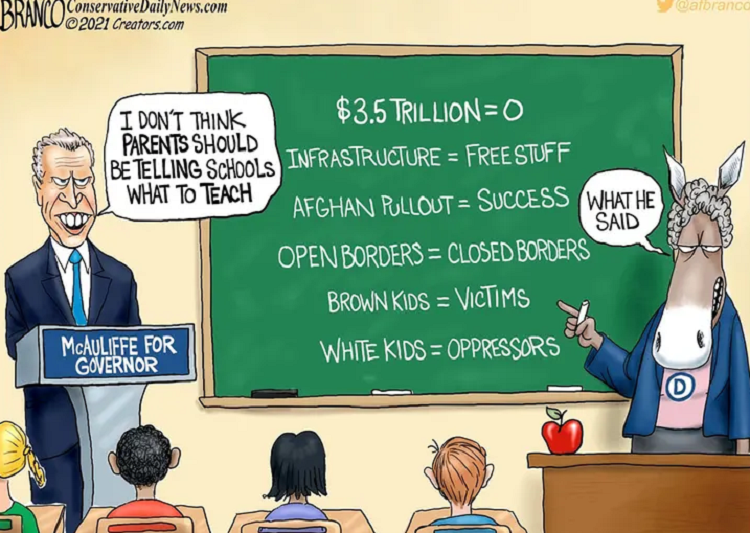 “During last week’s Virginia gubernatorial debate, Democrat candidate Terry McAuliffe promised that as governor he would prevent parents from removing sexually explicit books from school libraries, because he doesn’t think “parents should be telling schools what they should teach.”

McAuliffe’s disdain for parents who think they should have some say in their children’s education is shared by most “progressives,” as well as some who call themselves conservatives. They think parents should obediently pay the taxes to fund the government schools and never question any aspect of the government school program.

School officials’ refusal to obey the wishes of parents extends to the anti-science mask mandates. Mask mandates are not only useless in protecting children from a virus they are at low risk of becoming sick from or transmitting, the mandated mask-wearing actually makes children sick!

Yet school administrators refuse to follow the science if that means listening to parents instead of the so-called experts.

Replacing parental control with government control of education (and other aspects of child raising) has been a goal of authoritarians since Plato. After all, it is much easier to ensure obedience if someone has been raised to think of the government as the source of all wisdom and truth, as well as the provider of all of life’s necessities.

In contrast to an authoritarian society, a free society recognizes that parents have both the responsibility and the right to provide their children with a quality education that reflects the parents’ values. Teachers who use their positions to indoctrinate children in beliefs that contradict the views of the parents are the ones overstepping their bounds.

Restoring parental control of education should be a priority for all who believe in liberty. If government can override the wishes of parents in the name of “education” or “protecting children’s health” then what area of our lives is safe from government intrusion?

Fortunately, growing dissatisfaction with government schools is leading many parents to try to change school policies.”