DEMS GO FROM IRONY TO PARODY 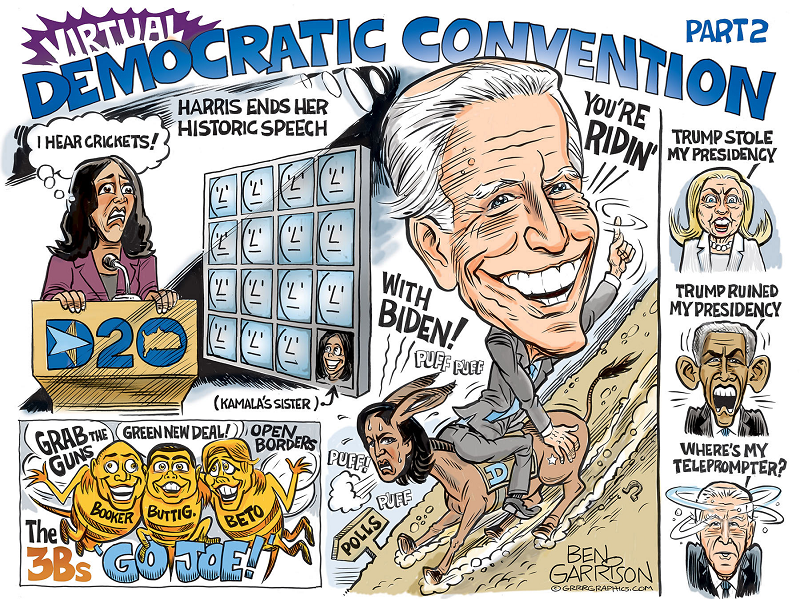 If nothing else, the architects of the 2020 Democrat Convention appeared to be ignorant of irony.

Either that, or they know irony so well and cared so little that they wished to ram it down the throats of the few who watched the nightly taped speeches—as if to say, “We’re hypocrites and proud of it—and what are you going to do about it?”

There is one rule that should guide all of Bill Clinton’s post-presidential speeches.

He must never use the term “Oval Office” in reference to its ethical or professional requirements during his own tenure. The second he does, the natural response is to equate that hallowed location with the scene of his tawdry sexual escapades with a young intern—what the Left under other circumstances would call, at best, a “power imbalance” or “a hostile workplace climate,” and at worst sexual assault, full stop.

And so what does Clinton say during the convention? He lectures Trump on how the Oval Office must become the locus of positive presidential power, inspired decision-making, and resolute authority.

Thereby reminding the listener of his Oval Office trysts with Monica Lewinsky–at the same time Nemesis lands on his hubristic shoulder with a picture of him getting a neck rub from an Epstein girl in an interlude from an Epstein flight.

There is one rule that should guide all of Barack Obama’s post-presidential speeches. He should never mention respect for the Constitution and the rule of law that begins in the Oval Office. And yet Obama did just that.

So the listener then asks himself: did Obama not plan the destruction of Donald Trump’s national security advisor designate, General Michael Flynn, from the Oval Office? Did he not, while in the Oval Office, oversee illegal Department of Justice and FBI surveillance of a U.S. citizen, despite being warned by his own hirelings in the FBI that the taped Flynn calls with Russia’s U.S. ambassador were “legitimate”?

In other words, Barack Obama, for the first time in U.S. presidential history, had his appointees in the Department of Justice, CIA, and FBI surveil and disrupt, through a false “dossier,” an opposition political campaign. He sought to tap, monitor, and deceive an incoming elected president and his staff. Finally, on exiting, he put in place people and procedures to ensure that the succeeding administration would be weakened and disrupted.

Thus, last week Obama emphasized his allegiance to the Constitution at the very time a federal prosecutor had just won a confession from an FBI lawyer for deceiving the Foreign Intelligence Surveillance Court, which in turn led to the unlawful surveillance of a U.S. citizen. And there will likely be more indictments of Obama appointees to come.

There is one rule that should guide Elizabeth Warren in all of her campaign-related activities. Under no circumstances, should she reference Native American issues, especially in the role as a tribal advocate.

Again, what does she do? She serves on the Democratic Convention Native American Caucus Committee.

What could Warren possibly say to reassure such representatives—“I have so proved my commitment to our Native American communities that I was willing to create a false identity as an American Indian”? “My high cheekbones are proof of my solidarity”?

Or, “We must be careful not to let outsiders, eager to exploit false and constructed ethnic identities for careerist purposes, habitually expropriate Native American heritages to advance their own interests at the expense of the indigenous community”?

There is one rule that Governor Andrew Cuomo should follow in all discussions of  COVID-19.

Given his own disastrous record, he should never claim success in battling the virus by disparaging the successes of other states or nations in combating the contagion, especially on the basis of deaths per million residents.

Cuomo himself sensed that trap once. In his earlier paranoia and embarrassment over his February and early March assurances (along with those of his doppelganger Bill de Blasio) that New York remained wide open and still ready for business, Cuomo demanded all sorts of instant federal relief.

He screamed nightly about the need for thousands of ventilators. He wanted a federal hospital ship, a tent city hospital, and stocks of protective equipment.

So terrified of repercussions over his prior laxity and so clueless as to the proper course of action and so eager to get infected patients out of sight and out of mind, Cuomo both praised Trump’s cooperation to the skies as his wish list was granted and ordered nursing homes and assisted living centers to admit active COVID-19 patients.

The result was predictable: somewhere between 10,000-15,000 previously uninfected residents died needlessly from the virus.

What did Cuomo do then?  In the best tradition of progressive projection—accuse others of what one is guilty of—Cuomo immediately quashed investigations into his role in the tragedy.  He then trashed Trump for his insufficient response and blamed him for U.S. deaths.

In her post-first lady career, one would imagine Michelle Obama would avoid two or three of her once-signature topics in the olden days of “never been proud” and “downright mean country”: one, disdain for the “rich,” and, two, race-baiting in the context of her own misfortunes.

Yet what does she say at the convention?

“And here at home, as George Floyd, Breonna Taylor, and a never-ending list of innocent people of color continue to be murdered, stating the simple fact that a black life matters is still met with derision from the nation’s highest office.”

While the death of George Floyd was tragic and shocking, in fact, fewer than 15 unarmed African Americans were killed last year by police—compared to 25 whites.

White officers are not statistically more prone to kill blacks in custody than are non-white officers. More police were fatally shot in 2019 (15) by blacks than were unarmed blacks during police stops and arrests (9 & 14). More importantly, in 2019 more than 7,000 blacks were murdered, most all by other blacks.

Statistics also suggest that in relatively rare interracial violent crimes, blacks are far more likely (depending on the particular crime) to kill or injure whites than vice versa, despite vast disparities in demographics (blacks make up 13 percent of the U.S. population versus whites, who comprise roughly 60 percent).

None of these data supports Michelle Obama’s famous contention, “when they go low, we go high.” It is about as dishonest as saying some sort of structural bias explains the disproportional deaths of whites to opioid overdose, or that racism explains why blacks kill whites at five times the rate of whites killing blacks.

What would be the point of such a declaration other than to inflame racial tensions and reduce complexities to simple political advantage?

But Michelle can’t leave it there.  She actually said this:

“We live in a nation that is deeply divided, and I am a black woman speaking at the Democrat Convention.”

According to many polls, Michelle Obama is the most esteemed woman in America, and the majority of poll respondents belong to the so-called white majority.

In terms of her admission to Princeton and Harvard Law school, her employment in law firms and University of Chicago billets, and her White House persona, it is difficult to envision how being a “black woman,” frequently self-referenced, has proved disadvantageous.  She actually said this too:

“They see our leaders labeling fellow citizens enemies of the state while emboldening torch-bearing white supremacists. They watch in horror as children are torn from their families and thrown into cages, and pepper spray and rubber bullets are used on peaceful protestors for a photo-op.”

In the current violence, America sees no torch-bearing white supremacists—not in the nightly rampages in areas like Portland where a left-wing, young, white middle-class mob sought to roast police barricaded in their besieged precinct. Or in Chicago, where mostly African American youth systematically looted and destroyed much of Chicago’s Magnificent Mile, in efforts to strip outlets like Gucci and Louis Vuitton of their tony bags and shoes.

No mention of that of course.  Instead she asks:

“So what do we do now? What’s our strategy? Over the past four years, a lot of people have asked me, ‘When others are going so low, does going high still really work?’ “

We should ask her:  When have the Obamas ever gone high?

Barack Obama won his Senate race only after the sealed divorce records of both his primary and general election rivals were mysteriously leaked to the public. Sloganeering like “get in their faces,” “take a gun to a knife fight,” “punish our enemies,” and “you didn’t build that,” were boilerplate divisive campaign and presidential rhetoric during Obama’s two terms.

Why the excruciating left-wing irony, and why was it so unabashedly expressed at last week’s convention?

First, the new “progressives” and their converts live in an echo chamber where there is no journalism left as we once knew it. All these speakers assume that whatever untruth or embarrassing paradoxes they utter will go unchallenged by ABC, NBC, CBS, NPR, PBS, CNBC, MSNBC, and CNN. And undeterred, they are justifiably emboldened.

Second, leftists are postmodernists who believe in narratives, not facts. Truth or falsity hinges on who says what. The who, not the what, is all that matters. If one is an egalitarian, empathetic, and morally superior to the unwashed, then any means are allowable to further such noble ends.

Biden’s family can traffic in Ukrainian and Chinese lucre with exemption because they “care”; Trump’s Art of the Deal phone call to Ukraine—a supposed “high crime” compared to Obama’s explicit hot mic quid pro quo to Putin’s Russia—justified his impeachment. Michelle and Barack may distort, but if they do, it is justified given their arc-of-history mission.

Third, the Democrat Party is now that of the upper class and the very rich.

The Obamas are worth well over $100 million. The Clintons are worth as much or more. Elizabeth Warren wrote a book that included advice about profiting from house flipping. Joe Biden became a multimillionaire while a senator.

When one is rich and privileged with government largess and an array of subordinates, and one is professedly equalitarian, then one is also worried about one’s own apparent lack of egalitarianism.

Thus anger at the rich, and one’s own supposedly dominant culture of privilege, become a psychological mechanism of squaring the unsquarable circle that is being that which one rhetorically targets.

Finally, the Left is unhinged by Trump. Anything that is said to his detriment is “true” and “acceptable” and rules of discourse, logic, and empiricism are bourgeois relics in extremis.

All leftists might privately concede that they mark a new low in presidential destruction, all done mostly illegally or unethically. And yet the venom is justified in their minds, as pursuant to eliminating a supposedly existential threat to the establishment.

The point is not what Democrats say against Donald Trump, or the irony of their rhetoric, but the very fact that their opposition somehow exempts them from all rules of honesty and the absurdities of their own paradoxes.