Democrats have released The Kraken. It will devour them.

Democrats subsidize Antifa Communists and BLM thugs and make excuses for their violence in the hopes the disorder they cause will hurt President Trump in November.

But the monsters they’ve let loose on society are more interested in tearing down the system than in perpetuating Democrat control of it.

What happened in between were race riots, and “anti-war” riots and bombings instigated by Antifa’s Commie predecessors such as the Weathermen.

Back then, Democrats had the good sense to put some distance between themselves and the looters, arsonists and bombers. Still, Republicans – running on a law and order platform – won five of the next six presidential elections. 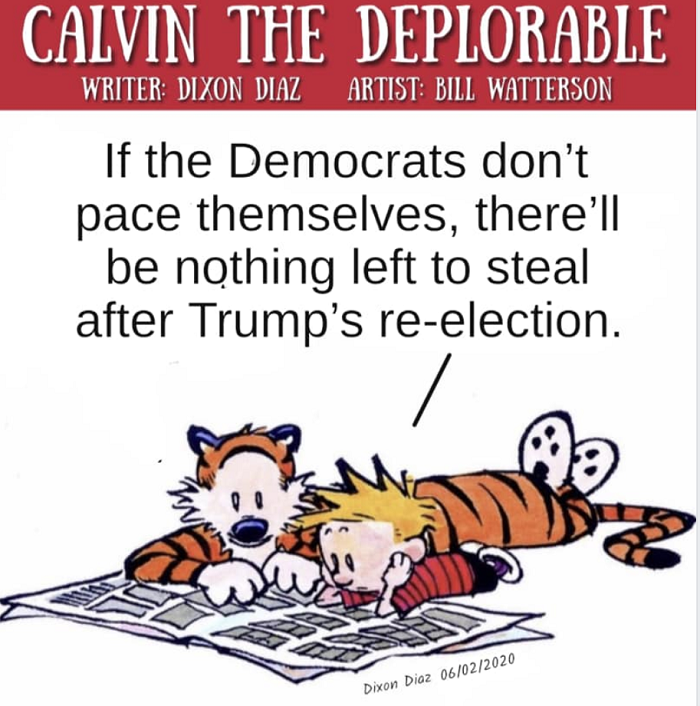 “Defund the police,” demand Antifa and BLM. They get a sympathetic hearing from many in the MSM.

If there were no police, who would come to help if someone broke into my house in the middle of the night? CNN anchor Alisyn Camerota asked Lisa Bender, president of the Minneapolis City Council.

The expression on Camerota’s face as Ms. Bender blows off that question with bilge about “checking her privilege” is priceless.

Why yes, yes it does, protestors say. Watch as the mob shoos away the soy boy mayor of Minneapolis, Jacob Frey, after he says he wants to reform the police, not defund them.

Mau Mau-ing the police will backfire at the polls in November, have profound repercussions long afterward.

The Minneapolis city council plans to virtue signal for several months before defunding the police. But the horse has left that barn. Cops there and in other blue cities are quitting, taking early retirement. Who can blame them?

Many small businesses destroyed by the rioters will not reopen. Big box store chains likely won’t rebuild in cities where political leaders won’t protect them from looters and arsonists.

Truck drivers say they won’t make deliveries in cities where police have been defunded, increasing the likelihood Wal Mart and Target and Walgreens will stay away.

Blue cities will shrivel as those who can leave.

Middle class people in the suburbs will buy more guns and ammunition, form armed neighborhood watches to protect their homes.

The wealthy will have private security for their gated communities.

In the urban jungle that will result from condoning mob violence, the big losers, as per usual, will be the poor in the inner city, who will find it harder than ever to shop for food and medicine, and to find jobs.

This is how Matt Walsh feels about the anguish of this young black mother as she surveys the ruins of her neighborhood grocery store.

“To all of you tolerant liberals who displayed your wokeness by justifying rioting while sitting on your fat comfortable asses totally insulated from the damage, this is what you supported. This is on you. Congratulations you despicable monsters.
— Matt Walsh (@MattWalshBlog) June 15, 2020”

The people responsible for this – both the thugs who looted the stores and the leftists who make excuses for the thugs – are moral monsters.

Leftists want to keep inner city blacks poor because they figure that’s the best way to keep them voting for Democrats. Only when more realize Democrats care only for their votes will their circumstances improve.

Some Democrat mayors and governors have visions of Kent State 1970 dancing in their heads. By doing nothing to stop the rioting, they hoped to goad President Trump into over-reacting.

This hit piece in the Atlantic by James Mattis seems predicated on the assumption the president would use U.S. troops to restore order.

Troops from the 82nd Airborne flew from Fort Bragg to an undisclosed location near Washington D.C., then flew back again.

While the MSM – like a kitten chasing a laser pointer – was mesmerized by the movement, Trump quietly dispatched thousands of well-trained federal cops to hot spots. Did you know the Dept. of Agriculture has a SWAT team? So do the Railroad Retirement Board and the Fish and Wildlife Service and many other agencies.

The violence in the Twin Cities was stopped in one night. That night, the St. Paul police department said it pulled over several vehicles driving around without license plates.

“Each time officers stopped the vehicles, people inside have raced away on foot, leaving vehicles and tools used to wreak havoc on our city behind,” the St. Paul PD said.

Hmmm. Cops stop multiple vehicles filled with bad guys, all of whom ran away on foot, leaving behind guns and bricks and Molotov cocktails. Cops who had cars couldn’t catch any of them. Either the cops aren’t very competent, or…

Thomas Wictor/Carlos Osweda thinks the cars were stopped because feds fried their electronics with a device like this one, grabbed up the malefactors, then told the St. Paul police where to find their cars. Makes more sense to me than that the cops couldn’t find their buttocks with a map and a compass.

President Trump’s job approval is suffering because some conservatives are impatient for him to crack down on CHAZ, the Antifa mini-state in Seattle.

It’s the responsibility of the mayor and the governor to restore law and order. But Mayor Jenny Durkin and Gov. Jay Inslee support CHAZ, dare the president to act.

CHAZ likely will fall apart in the next few weeks. In the meantime, it’s an object lesson in the fecklessness of the left. And by the time CHAZ does fall apart, most people in Washington state should be really, really mad at Durkin and Inslee for their dereliction of duty.

People in blue states must be shown how evil are the Democrats for whom they voted. This takes time.

If he must, President Trump will intervene. But he won’t send in the Marines. As in Minneapolis and in Washington D.C., he’ll do something more subtle.

In the meantime, President Trump issued an executive order Tuesday (6/16) that at once makes him the foremost defender of cops, and the foremost champion of police reform.

The executive order is a “good thing,” said CNN commentator Van Jones. “Progress has been made.”

Leftists convinced they are so much smarter than the president would do well to reflect on why he always seems to be a step or two ahead of them.