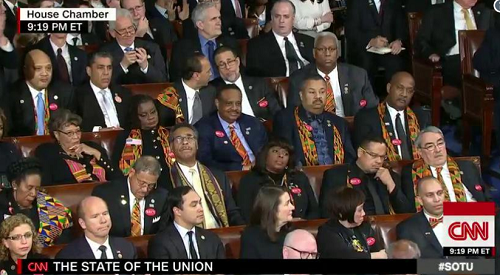 It is difficult to imagine a more galling demonstration of incivility than the Democrats in the House Chamber for Trump’s SOTU speech last night (1/30).

They scowled, frowned, and sat on their hands throughout the speech. They could hardly be bothered to acknowledge the heroes in the audience when they were introduced. While the Dems brought illegal immigrants, Trump invited actual paragons of American character and the families of victims of illegal immigrant crimes, as well as a victim of North Korea.

It was embarrassing, like watching the anti-Semites in the UN stomp out of the room when Benjamin Netanyahu speaks. How is it any different? Our Democrats behave exactly like the most racist, intolerant people on the planet, and in their own Capitol.

The Democrats loathe the tax reform that has kick-started the American economy. They abhor the return of American manufacturing and the bonuses so many companies have doled out to their employees.

It was not so long ago that Obama essentially swore that “those jobs are never coming back.” “Crumbs,” billionaire Pelosi called their bonuses.

The left today hates our military. They hate the notion of national security.

Like Obama, they cannot abide the unfair advantage, as they see it, of American might, American success, and American freedom which they are always trying to impede, to restrict, to regulate and tax.

The Left has been doing its best to turn the United States into Venezuela for two generations. Progressivism is socialism. Venezuela is how it ends.

How and why have the Leftists among us become so anti-American, so contemptuous of the Constitution, the Founders, and American heroism?

When did they get to be so rude? They hate Trump so much they have regressed to being playground bullies, a gang of horrid little toddlers.

They seem to have one issue and one issue only, the prioritization of illegal immigrants. That’s all they’ve got and for some reason they think it is a winning issue, that it will drive their base to take back the House and maybe even the Senate this year.

They are so blinded by the light of their own self-regard they think that is a turnout cause for most Americans who are suffering under the onslaught of illegals in their communities. Congressman Tim Ryan, a Democrat from Ohio, kept an empty seat to honor a deported illegal from his district, a district in which many thousands have died from opioid overdose.

Tucker Carlson asked Ryan why he would want to make his defense of illegals a cause and not the deaths of so many Americans. He did not have a satisfactory answer. But this much is clear:

The Democratic Party is today the party of illegal immigrants. That is their core constituency, that is who they represent over and above Americans.

It was truly shocking for all to see how disrespectful were the Democrats in attendance. Do they think their bad manners will endear them to the American people, most of whom have been taught basic manners and probably agree with nearly every word Trump spoke tonight?

Do they think that refusing to stand for the heroes and victims Trump profiled will win over new voters? The members of the Black Caucus in attendance did not even stand when Trump touted the “lowest black unemployment ever recorded.” They cannot even celebrate good news for their own people who suffered terribly under Obama.

These elected representatives lack the basics of common sense if they think this kind of scorn will win over voters.

High taxes, redistribution of wealth, open borders, the erasure of gender, the primacy of skin color, the dumbing-down of education across the board: these are the policies the Democrats promote.

This is why they are desperate for illegal immigration, amnesty for millions, and chain migration. They cannot remain in power if they do not massively increase the dependent class they themselves created by design.

It goes without saying that many of these immigrants are hardworking, fine people who are assets to our civil society, but many thousands of them are not. The criminal element among them is too much to bear. That is why legal immigration and immigration laws exist!

The fact that the Democrats in Congress loathe Trump more than they love their country or the American people is a tragedy. They have become a group of chattering nabobs who have nothing but disdain for the President and anyone who voted for him, those of us who wisely chose a political novice over a known criminal and liar.

Given the many successes of Trump’s first year (too many to list here), that choice would make Trump supporters the really smart people. It follows then that the Democrats are not only ill-mannered and out of touch with the constituents they represent, they are not very bright.

Generally speaking, enmity and rancor do not win over voters. Optimism and success for all does. Love of country does.

Trump loves the country and all of its people. That was the message of the night, loud and clear.