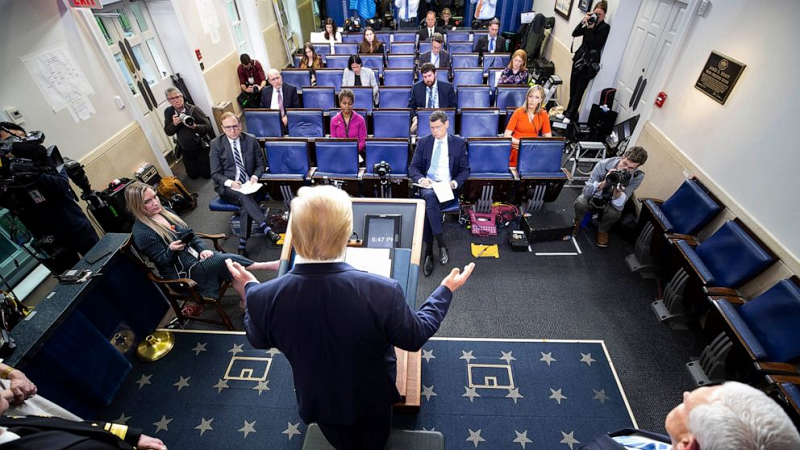 Dangerous to whom?  Not to Americans – only to them and their pathological Hate America-Hate Trump narrative.

Of course, Rachel Maddow, Dan Rather and other MSM bigwigs agreed.

Ms. Sullivan’s column was triggered by this exchange the day before between the president and Peter Alexander of NBC News:

2⃣Alexander attacks Trump's positivity, accuses him of "misrepresenting," implies people should not have hope. pic.twitter.com/GQOqqa2hwq

News organizations deceptively edited the exchange to conceal why Trump was angry at Alexander.

The White House briefings are dangerous and destructive only to MSM narratives.

Alexander asked his snide “question” after the president expressed hope the anti-malaria drug chloroquine will turn out to be an effective treatment for the Wuhan virus.

In limited tests, all patients treated with hydroxychloroquine and azithromycin recovered within six days.

Gaslighting got surreal when journos blamed Trump for the death of an Arizona man who swallowed large amounts of the fish tank cleaner chloroquine phosphate. 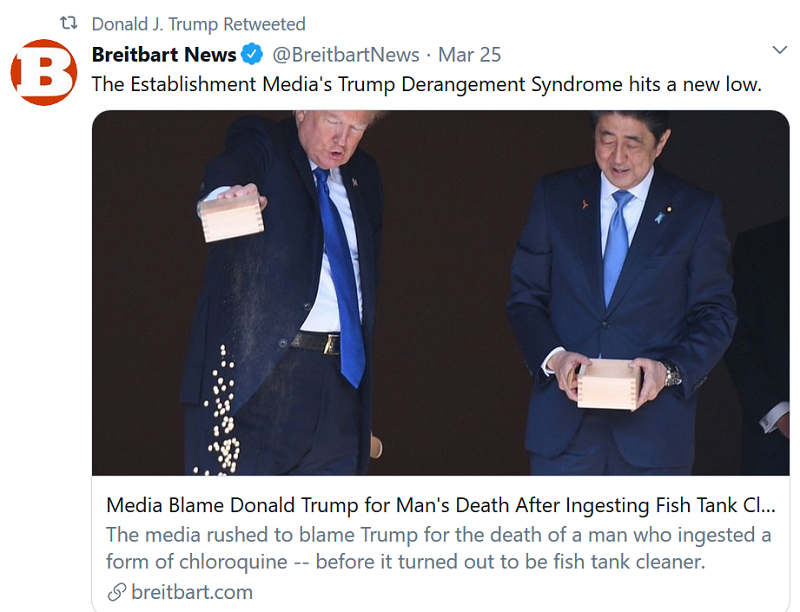 Dr. Anthony Fauci, head of the National Institute of Allergy and Infectious Diseases, is a bureaucrat who, evidently, admires Hillary Clinton. Doubtless he and President Trump have some differences of opinion.

But Dr. Fauci is angered by MSM efforts to create a “rift” between the president and him.

The Lying Swine peddle fear. There is no good news they won’t try to spin into bad.

The president has botched the response to the pandemic, Fake Newsers say. A corrupt, senile old pervert who can’t speak for five minutes without losing his train of thought or making a gaffe would do a better job, they tell us.

Alas for them, a large majority of Americans approve of how the president is dealing with the crisis, polls indicate.

That’s chiefly because so many watched the daily news briefings from the White House, the only source of accurate, comprehensive information about what’s being done to contain the Wuhan virus.

Which is why the MSM doesn’t want to broadcast them anymore. People who have access to the truth are harder to gaslight.

The truth is President Trump responded to the threat much sooner – and far more effectively – than any other world leader.

The Wuhan virus was spread throughout the world chiefly by Chinese living abroad who went home for the Lunar New Year, returned carrying the virus.

President Trump ordered that air passengers from China be screened January 17. He shut down air travel from China Jan. 31. On both occasions, Democrats and MSM pundits said he was being racist.

Mark Levine is chairman of the Health Committee on the New York City Council. Weeks after the president first took action, this is what Levine said about a public gathering with very likely infected people:

“In powerful show of defiance of coronavirus scare, huge crowds gathering in NYC’s Chinatown for ceremony ahead of annual Lunar New Year parade… If you are staying away, you are missing out!”

Oxirus Barbot, New York City’s health commissioner, said: “I want to remind everyone to enjoy the parade and not change any plans due to misinformation spreading about coronavirus.”

Is it any wonder why the pandemic is very much worse in New York than anywhere else in the country?

Most European leaders were more than a month behind Trump in imposing restrictions on travel from China, which is chiefly why the pandemic is much worse there than here (except for the New York metro area).

President Trump was right to restrict travel when he did.

More agree with him, now, about the importance of secure borders. (Many who didn’t care much that drugs, criminals, and human traffickers flood across our southern border draw the line at letting in a deadly virus.)

And many who were unaware of the problem agree with Trump that it was dangerously stupid to become dependent on China for medicines and other goods critical to our health and safety.

Democrats and Fake Newsers were wrong about all of this.

In our federal system, state and local governments are primarily responsible for dealing with public health issues.

After they were depleted by the swine flu pandemic of 2009-2010, governors could have replenished supplies of critical medical equipment. Most didn’t.

Cuomo was told in 2015 New York would need 16,000 ventilators to deal with a future pandemic, but he had other priorities. Now he’s trying to blame Trump for his negligence.

The Obama administration should have replenished federal stockpiles after the swine flu pandemic, but chose not to.

By slashing red tape and enlisting the help of the private sector, President Trump is making good the shortfalls in record time.

Fake newsers don’t want Americans to know this. Hence the attempt to censor the White House briefings, so only their spin reaches the public.

MSM gaslighting is faltering because more of us can see with our lying eyes how massive, unprecedented, and effective the administration’s response has been.

It’s especially important that Trump be able to cut through MSM spin when he talks to Americans about the need to revive our economy. Fake Newsers want to cause a depression, don’t care how many are hurt by it.

To stop broadcasting the briefings in the midst of a national emergency is as despicable as the Democrats’ trashing of the economic relief package.

I wonder if the Emergency Broadcast System could be utilized to require the networks to broadcast the briefings live.

The MSM would scream bloody murder. But they do that anyway. He had to take this step, the president could explain to a huge national audience, because otherwise Americans would never hear the truth.