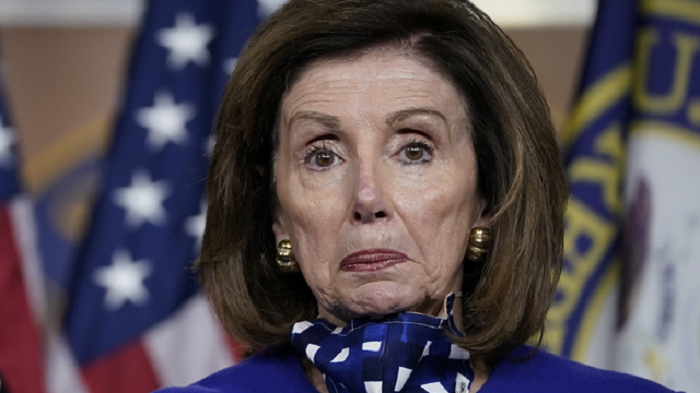 She knows the end is nigh

What accounts for the frenzied shift to hysterical language among Leftists when attempting to demean the president every time they open their mouths?  That is an easy question; they know that Biden is a pathetic loser and that Trump is going to defeat him handily in November.

Sure, the constant din of their hateful slings and arrows may have done some damage, but not nearly enough for him to lose the election, and the Democrats know it.

Thus, we hear terms like “storm troopers,” “militia,” “private troops,” and other nonsensical language to describe Trump’s light-touch attempts at rescuing those Democrat-run cities that are under siege by violent Marxist groups like Antifa and Black Lives Matter.

The Left loves the vocabulary of the Third Reich.  Nancy Pelosi, who was horrified whenever Trump called COVID-19 the Wuhan virus, now calls it the “Trump virus.”  No verbal assault is too low for Leftists.  As usual, the Democrats make the mistake of assuming that Trump-supporters are rather stupid, easily manipulated by their mono-minded media and sound bites.

They don’t seem to grasp the fact that much of America is laughing at them for their misplaced arrogance and crying for the residents of those cities being destroyed by Leftist officials and the well-organized, well-funded anarchist groups that have turned them into war zones.

What’s their plan?  To discredit the outcome of the election before it takes place.

Every Democrat who appears on a cable or network news program as well as every radical on CNN and MSNBC has received his talking points: Trump will refuse to leave the W.H. if he loses, he will use the military one way or another, he will commit voter fraud, etc.

These are all things Leftists actually do.  They cheat — always have, always will, which is why, as Hugh Hewitt wrote a book about years ago, “If it’s not close, they can’t cheat.”  Chances are, it will not be close, and the Democrats know it.

If Biden were to win, he would have to be removed almost immediately for mental incapacity.  As blinkered as the Left is, Leftists can see as well as everyone else that Biden’s dementia is progressing rapidly.  They think if they can just eke out his win, Sanders and Warren can run the country.

The Biden-Sanders Unity Project spells out the end of America and the implementation of full-scale socialism of the Marxist variety.

For the never-let-a-crisis-go-to-waste Left, the COVID pandemic was a gift.  Leftists needed only to exploit it and convince the public that it is the 2020 version of the Black Death.

Not surprisingly, those Americans who believe that it is the government’s job to care for them and who take on faith every word the media utter have been and still are willing dupes for all the fudged numbers re: cases, hospitalizations, and deaths.

The mandatory mask bit has filled the Left with glee!  Leftists are stunned by the vast numbers of people who believe that masks provide protection against the virus and who have succumbed to these silly mandates.

So gullible is this portion of the virtue-signaling public that for them, the masks have become a symbol of decency when in fact they are a symbol of submission to nonsense.

The entire lockdown was and is a dream come true for the Left.  Leftists are certain that this will be Trump’s undoing.

Wisdom and practice should have dictated that the elderly with other illnesses be quarantined and wear masks in public, not the millions of healthy people who have had their livelihoods come to a full stop.

Good news about the slow demise of the flu is being suppressed, the numbers regularly inflated — by the media and by the hospitals that have nearly been put out of business.  Hospitals across the nation have been nearly put out of business by fear of the virus, so they inflate the numbers for government money.

The same easily manipulated portion of the population that thinks masks are a panacea bought into the polliticization of hydroxychloroquine because it was President Trump who first mentioned the nearly 60-year-old drug as a possible treatment.  It was and is the best treatment to date.

Trump was on top of COVID-19 sooner than any Democrat, and he has managed it better than any other world leader and certainly better than certain incompetent governors.  Trump’s effective utilization of private industry has been brilliant.  The Obama/Biden administration was completely behind the 8-ball throughout the H1N1 epidemic, yet Biden continues to criticize Trump’s handling of this crisis!

It seems as though Biden no longer keeps current with the news.  When asked what he would do, everything he listed had been done months ago.  His wife and his staff are using and abusing a senile old man in order to make the United States a socialist nation.  Jill Biden apparently has dreams of being Edith Wilson!

The hysteria on the Left is understandable.  Leftists made a huge mistake by thinking BLM, Antifa, and all the violent rioters, looters, and vandals would bring people over to their side.  What is their side?

Granted, this is the nonsense that has been taught to university students for at least two generations, so that group is mindlessly and dutifully on board as indoctrinated.

But the people who actually contribute to the glory of this nation, who have made it the most successful economy in world history, have not been brainwashed.  They love their country, their families, their homes, their local businesses and the people who run them.  They work hard and contribute, unlike most of the pols in D.C. or the talking heads on cable TV.

They did love their sports, but, as Dennis Prager often says, “the Left destroys everything it touches.”  Now it has ruined sports by co-opting all of them to Anti-American dogma.  Now the scourge of BLM and preening social justice memes on jerseys is up front and in the faces of fans who used to enjoy the escape sports provided.

The Left, and the Democrat Party which it controls, is melting down for all to see.  None of its labyrinthine plans to destroy Trump have borne fruit.

The Russia-collusion hoax has been exposed for what it was: a treasonous plot to overthrow a duly elected president.

Impeachment was pure folly set in motion by one of the most corrupt members of the House, Adam Schiff.  The Democrats’ attempts to find something untoward in Trump’s financial dealings have failed.  The Democrats support the defund-the-police campaign and refuse to condemn the violence we are seeing in the streets.

The American Democrat party is now fully socialist.  We would all be wise to remember Churchill’s maxim: “Socialism is a philosophy of failure, the creed of ignorance, and the gospel of envy, its inherent virtue is the equal sharing of misery.”

The Left’s escalating war of words is just exposing Leftists’ abject misery over Trump’s ongoing success and their knowledge that they cannot beat him.  There is a silent majority out there, and those people are enthusiastic, ready to crawl over burning coals to vote for Trump.  You can take that to the bank.