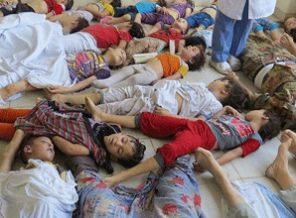 Leadership. That’s what we lacked for eight years. In the early hours of Friday morning in Syria — late Thursday evening here — our military, acting on the order of our commander-in-chief, avenged the slaughtered innocents in Syria and sent a clear message that we will not tolerate the use of chemical weapons. Well done!

Waves of more than 50 cruise missiles, launched from US warships, struck the Syrian air base from which Tuesday’s chemical-weapons attack on a Syrian town had been launched.

The strikes targeted aircraft, fuel supplies, arms stocks and runways. This was exactly the right approach: enough to hurt. President Trump just put an end to the Obama era of vacillation and cowardice.

Trump also ignored Russia’s shameless prevarications. We did warn the Russians to evacuate any of their personnel who were on the base — which may also have alerted the Syrians — but the point was made: Slaughter the innocent and there’s one country left in the world that won’t allow it.

Incontestably, our president became . . . presidential. He passed his first pressing foreign-policy test with dispatch and guts.

To know the full results of our attack, we’ll have to wait for imagery, daylight and bomb-damage assessment. No attack goes perfectly. But Trump just sent a vital message — to the butcher Bashar al-Assad, and also to North Korea’s Kim Jong-un and other rogue leaders:

The United States is back. There are, indeed, red lines. And the enemies of humanity cross those lines at their peril.

Nor was the lesson lost on President Xi Jinping of China, who, with perfect timing, is our president’s guest at Mar-a-Largo.

The coming days will see no end of partisan second-guessing, hand-wringing and, yes, actual repercussions. But President Trump did the right thing.

Relying on the strong backbones of Secretary of Defense Jim Mattis, National Security Advisor H.R. McMaster and, not least, our men and women in uniform, the president knocked it out of the park on his first time at bat in the foreign-policy big leagues.

As I write these lines, I’m unabashedly proud to be an American. Republican, Democrat or independent, you should be, too. Once again, we stood on the side of justice and humanity.

It’s been too damned long, but we’re back.

Remember the date: April 4, 2017. That’s when nerve-gas bombs fell on a Syrian town, killing dozens — including children, women and the elderly — with no effort to disguise the crime. And the world did nothing.

That date marks the beginning of the collapse of a ban on chemical weapons that has endured for nearly a century. Even the worst dictators feared using chemical weapons, and did so furtively, if at all. Now the Geneva Protocol of 1925, buttressed by later accords, has collapsed atop Syrian infants.

Standing beside King Abdullah of Jordan on Wednesday (4/05), President Trump stated that Syria’s behavior “cannot be tolerated.” He sounded like President Barack Obama.

If we do not respond forcefully, chemical weapons will be used against our military in the future, by one rogue state or another. Worse, if the ban on chemical weapons is allowed to crumble, the taboos on biological weapons (germ warfare) and nuclear use will be the next to dissolve.

Those agonized deaths in Syria weren’t far away. They happened next door.

In the brutal world beyond our shores, where the human animal is barely caged by laws, our grimmest endeavor, warfare, has largely (albeit never completely) been governed by rules agreed in the common interest.

Syrian dictator and war criminal Bashar al-Assad is tearing away the last facade of humanity in war.

What should we do? As with the president’s rhetoric, UN Ambassador Nikki Haley’s heartfelt address to the Security Council on Wednesday was no substitute for applying force. We know which Syrian air base those attack planes flew from. We should destroy every aircraft in every bunkered hangar in that facility. Call Vladimir Putin’s bluff. Let the empty rhetoric be Putin’s this time around.

Why us? Who else? Russia, Iran and Hezbollah are the three horsemen of Assad’s apocalypse. Strike Assad even if those nerve-gas victims mean nothing to you. Do it in our own interests, for the benefit of the living. Those who use chemical weapons must pay an exemplary price.

And do it because we bear a measure of responsibility for that chemical attack.

Yes, Trump’s right that a succession of (lesser) chemical attacks erased Obama’s infamous red line as Obama cowered. But blaming the former president helps nothing (as Obama blaming George W. Bush helped nothing). Trump is president now. This is his problem.

We’ve been told that there’s a new sheriff in town. Well, it’s time to crack down on the outlaws.

Our immediate responsibility traces to Secretary of State Rex Tillerson’s careless remarks last week. He took regime change in Syria off the table and, worse, made the preposterous statement that Syria’s future will be decided by the Syrian people.

Living or dead, the people have no say. Russia, Iran, Hezbollah and Assad are deciding Syria’s future, to the extent the corpse-strewn country has a tomorrow.

Such gaffes matter. We’ve been here before and paid the price in blood. When our diplomats speak loosely, all hell breaks loose. In the summer of 1990, our ambassador to Iraq, April Glaspie, told Saddam Hussein, “We have no opinion on your Arab-Arab conflicts, such as your dispute with Kuwait.” Eight days later, Saddam invaded Kuwait.

The world pays attention to every word our diplomats — and our presidents — say.

Assad’s use of nerve gas on his own people was strategically gratuitous: He’s winning. But the attack did serve three purposes:

Second, he showed the opposition the extent of its powerlessness, abandoned by Western well-wishers.

Third, Assad was rubbing our faces in it. The nerve-gas attack was his thank-you note to our secretary of state for tacitly acknowledging his regime (which was also a gift to Moscow, consigning Syria to Russia’s sphere of influence).

Sloppy language and empty threats from two administrations got us into this mess, but words won’t get us out.

If we don’t act, Assad’s behavior will worsen, and the ban on the use of weapons of mass destruction, nuclear, biological and chemical, will fall apart. And we’ll tumble into hell.

Those tiny corpses in Syria were your children.