CHRIS WRAY IS THE PROBLEM WITH THE FBI – NOT THE SOLUTION 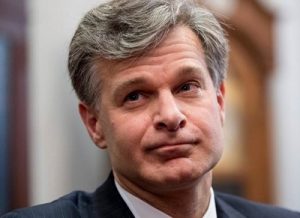 What was going on in Donald Trump’s head when he tweeted Friday (6/15) in response to the inspector general’s devastating report on the FBI that “Christopher Wray will bring it proudly back!”?

Perhaps the president thought he had better things to do than face another interminable nomination battle for a new director. Or perhaps he was trying to co-opt Wray. But if the FBI is meant to come back, proudly or otherwise, Christopher Wray is not the man. He is part of the problem.

In fact, Wray’s continuance as director signals the government is not serious about significantly reforming the FBI and that what changes will be made will be essentially cosmetic, lipstick on the proverbial pig.  (The inspector general’s report can be read that way as well.)

This is not just because Wray worked under James Comey in his first important job as assistant attorney general in charge of the criminal division (2003-2005). That would be guilt by association, although in this instance it’s some association. What’s more important is what Wray himself has done recently or, more specifically, has not.

Wray began his tenure as FBI director some eleven months ago. Since then the record of the organization has been — it’s safe to say — atrocious. They have stonewalled, and continue to stonewall, virtually every oversight request from Senate and House committees in outright defiance of the separation of powers.

And when they have relented and revealed documents and texts, they have almost always been redacted beyond recognition, raising more questions than they answered.

Where was Wray in all this? Where was he when the Department of Justice and/or the FBI redacted Peter Strzok’s only now revealed (by the IG report) text message that even CNN’s Chris Cillizza admits gives “Donald Trump all the ‘deep state’ ammo he wanted.”

PAGE: “[Trump’s] not ever going to become president, right? Right?!”

I’m not going to comment on that text (many have) other than to say that it is redolent of the NKVD, but far stupider than they ever were. That Strzok was in charge of counter-intelligence defies the imagination.

Wray would explain, I suppose, that he reports to Rod Rosenstein — but is that enough of an excuse for acquiescence to what has been going on for the last year? Does it give you any confidence that this arch-insider can reform a world that has nurtured him for decades?

The article Wray wrote in response to the IG’s report is mostly mealy-mouthed pabulum. He seems to buy the IG’s dubious conclusion that although Michael Horowitz and Co. found myriad examples of anti-Trump bias, that bias did not affect decision making in the investigation.

That thinking is so meretricious your eyes roll at the basic prevarication of its premise. Who would leave evidence that their bias affected what they did? Not even Peter Stzrok is that dumb. (Well, almost.)

Horowitz’s report was basically Comey Lite because like the former FBI director, whom Horowitz rightly excoriates in the report, the inspector general details malfeasance after malfeasance and then lets the culprit off at the end — just as Comey did with Clinton.

I suspect Comey did this in part because he had a guilty conscience. He knew that Hillary was guilty — it was obvious — but he also knew he had to let her off. Obama had made that clear. So he spilled the beans, but then did what good Germans do and went along.

Horowitz has done something similar, although with more depth and intelligence. These actions, pseudo-reforms in essence, are sophisticated ways of maintaining the status quo. (Horowitz may redeem himself with his second report on FISA, etc.)

I hope I’m wrong, but keeping Christopher Wray as FBI director will do exactly the same thing — preserve this same status quo.

If you to truly want to reform the FBI, chose someone as far as possible from the system, even from the Department of Justice — someone with completely clean hands who doesn’t know any of them. Maybe a country lawyer.