CHINA IS NOT RECOVERING 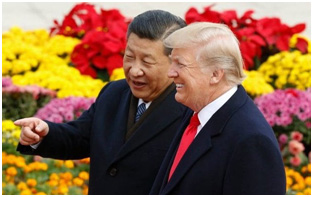 Donald Trump says “trade wars are good and easy to win” if your foes depend on your market and you can break them under pressure.

You see, he knows that China’s majestic and elegantly-stable GDP figures are best seen as an instrument of political combat.  Which is why he proclaimed victory when the Shanghai equity index went into a swoon over the winter. This is classic Trumpian gamesmanship.

It is in China’s urgent interest to puncture such claims as trade talks come to a head. Xi Jinping had to beat expectations with a crowd-pleaser in the first quarter. The number was duly produced: 6.4%. Let us all sing the March of the Volunteers.

“Could it really be true?” asked Beijing-based Caixin magazine. This was a brave question in Uncle Xi’s evermore totalitarian regime.

Of course it is not true.

The greater China sphere of east Asia is in the midst of an industrial recession. Nomura’s forward-looking index still points to a deepening downturn. “Those expecting a strong rebound in Asian export growth in coming months could be in for disappointment,” said the bank.

China’s rebound is hard to square with its own internal data. Simon Ward from Janus Henderson said nominal GDP growth – trickier to manipulate – is still falling. It dropped to 7.4% from 8.1% in the last quarter on 2018.

Household demand deposits fell by 1.1% last month. This means that the growth rate of “true” M1 money is still at slump levels. It has ticked up a fraction but this is nothing like previous episodes of Chinese stimulus. It points towards stagnation into late 2019. “Hold the champagne,” he said.

A paper last month by Wei Chen and Chang-Tai Tsieh for the Brookings Institution – “A Forensic Examination of China’s National Accounts” – concluded that GDP growth has been overstated by 1.7% a year on average since 2006. They used satellite data to track night lights in manufacturing zones, railway cargo volume, and so forth.

“Local officials are rewarded for meeting growth and investment targets,” they said. “Therefore, it is not surprising that local governments also have an incentive to skew the statistics.”

Liaoning – a Spain-sized province in the north – recently corrected its figures after an anti-corruption crackdown exposed grotesque abuses. Estimated GDP was cut by 22%. You get the picture.

Bear in mind that if China’s economy is a fifth or a quarter smaller than claimed it implies that the total debt ratio is not 300% of GDP (IIF data) but closer to 400%. If China’s growth rate is 1.7% lower – and falling every year – the country is less able to rely on nominal GDP expansion whittling away the liabilities.

Debt dynamics take an ugly turn – just at a time when China’s working-age population is contracting by two million a year.

The International Monetary Fund says China needs true growth of 5% to prevent a rising ratio of bad loans in the banking system.

China bulls in the West do not dispute most of this. But they say that what matters is the “direction” of the data, and this is looking better. Stimulus is flowing through. It gained traction in March with an 8.5% bounce in industrial output – though sceptics suspect that VAT changes led to front-loading.

Suddenly the words “green shoots” are on everybody’s lips.

The thinking is that China will rescue Europe. Optimists are doubling down on another burst of global growth, clinched by the capitulation of the US Federal Reserve. It will be a repeat of the post-2016 recovery cycle.

Personally, I don’t believe this happy narrative. But what I do respect after observing late-cycle psychology over four decades – and having turned bearish too early during the dotcom boom – is that investors latch onto good news with alacrity during the final phase of a long expansion. A filtering bias creeps in.

So sticking my neck out, let me hazard that heady optimism will lead to a summer rally on asset markets until the economic damage below the waterline becomes clear.

Let us concede that Beijing has opened its fiscal floodgates to some degree over recent weeks. Broad credit grew by $430bn in March alone. Business tax cuts were another $300bn. Bond issuance by local governments was pulled forward for extra impact. But once you strip out the offsets, it is far from clear that the picture for 2019 has changed.

Nor is it clear what can be achieved with more credit. The IMF said in its Fiscal Monitor that the country now needs 4.1 yuan of extra credit to generate one yuan of GDP growth, compared to 3.5 in 2015, and 2.5 in 2009. The “credit intensity ratio” has worsened dramatically.

This is why the People’s Bank of China (PBOC) is pushing back valiantly against easy-money creditists in the finance ministry. Benefits are marginal and dangers are rising exponentially. The PBOC deserves plaudits for delivering a softish landing, but a landing it is.

The economy will probably bottom out at growth rates of 4.5% this quarter (on proxy measures). Such stabilization is not enough for a world that has come to depend on China to hold up the heavens.

I stick to my view that Europe is on the thinnest of ice. It has a broken banking system. It is chronically incapable of generating its own internal growth or taking meaningful measures in self-defense.

Momentum has fizzled out in the international system. We are entering the window of maximum vulnerability.  China is not recovering and will not come to Europe’s – or Britain’s – rescue.