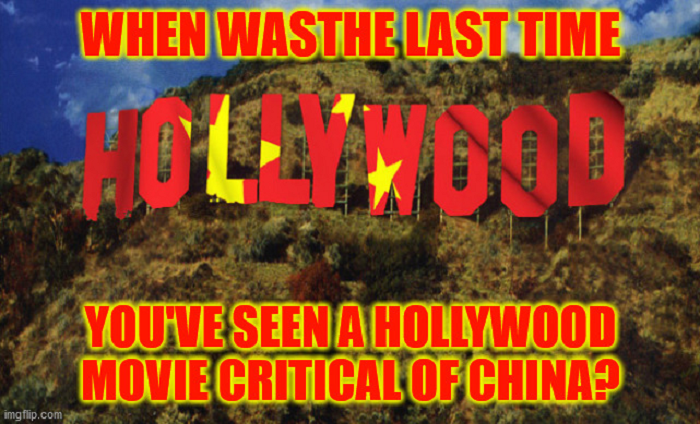 Dissidents have been warning us for years about the nature of China’s communist totalitarian regime.

But unlike a lot of them, the dictatorship also has money and markets. In the West, especially in Woke America, that means quisling defenders, many with a snoot in the Chicom trough.

So here comes a pitched curve ball for China’s clapping seals, according to the South China Morning Post:

A Chinese court has upheld a ruling that a textbook description of homosexuality as ‘a psychological disorder’ was not a factual error but merely an ‘academic view.’

The Chinese LGBT community, and the 24-year-old woman who filed the lawsuit, have expressed disappointment at the decision, handed down last week by the Suqian Intermediate People’s Court in the eastern province of Jiangsu.

Ou Jiayong, who also uses the name Xixi, said the court’s decision about what constituted a ‘factual error’ was ‘random and baseless.’ In 2016, during her first year of study at the South China Agricultural University in Guangzhou, Guangdong province, Xixi came across a psychology textbook that described being gay as a mental disorder.

The 2013 edition of Mental Health Education for College Students, published by Jinan University Press, listed homosexuality under ‘common psychosexual disorders’ — along with cross-dressing and fetishism. It stated that homosexuality ‘was believed to be a disruption of love and sex or perversion of the sex partner’.”

In China, that “academic view” pretty much permits the state to do whatever it wants to anyone who might be homosexual or gay.  In the eyes of the state, they’re mentally ill, see, and the totalitarians running the show there are all benevolent, wanting only the best for the worker-ant collective.

This is a pretty skeezy view, which puts gay people in China in quite a bit of legal peril.  Not even Singapore, famously intolerant of homosexuals in the past, does that anymore.  Singapore is the one China claims to imitate.  Guess not.

As for the judicial ruling, what the heck is an “academic view,” and why exactly does it fail to correlate with reality?

The bottom line here is that China once again proves it doesn’t care about international law.  It’s going to do what it’s going to do because it always gets away with it.

This puts China’s defenders, nearly all leftists, in an increasingly untenable position.

Where’s LeBron James, whose claim to fame beyond basketball is defending China?  He’s got business interests there, and he’s said nothing.

Where’s Disney, whose family fare these days is more than a little gay-friendly?  They too have got business interests in China, and worse still, they made a movie on a Chinese theme complete with Xinjiang’s laogai forced labor camps accidentally appearing in the background.

They may be indifferent to the laogai, but let’s hear their reaction to this news from China.

Hollywood in general is co-opted by China; China has bought up major shares in nearly every major studio.  And Hollywood is also quick to jump for causes that can be called gay.

Weren’t West Hollywood’s denizens responsible for blacklisting people who opposed a gay “marriage” initiative?  Didn’t this bunch boycott the Beverly Wilshire over the Sultan of Brunei’s purchase of a share of it, the Sultan instituting anti-gay policies back in his satrapy?

Suddenly, we don’t hear much from Hollywood about this classification of gayness as a mental illness.

There’s also the Chamber of Commerce, the charmers who engaged in the “conspiracy” to “save the 2020 election,” as Time magazine reported.  They’re big China-boosters.

And where’s Michael Bloomberg?  Bloomberg has famously refused to call China’s leader a “dictator,” giving a Clintonian dodge of “it’s a question of what is a dictator” to a town hall audience during his ill fated 2020 presidential run.  More disgusting still, he’s tried to ruin people who’ve spoken out about the hellhole.  Remember this, from The Intercept?

“I AM ONE of the many women Mike Bloomberg’s company tried to silence through nondisclosure agreements. The funny thing is, I never even worked for Bloomberg.

But my story shows the lengths that the Bloomberg machine will go to in order to avoid offending Beijing. Bloomberg’s company, Bloomberg LP, is so dependent on the vast China market for its business that its lawyers threatened to devastate my family financially if I didn’t sign an NDA silencing me about how Bloomberg News killed a story critical of Chinese Communist Party leaders.

It was only when I hired Edward Snowden’s lawyers in Hong Kong that Bloomberg LP eventually called off their hounds after many attempts to intimidate me.”

What about Nike, which touts every disrespect-America cause under the sun, which scotched its Betsy Ross flag shoe, but which continues to stand by China, even as it finds itself in court over its alleged use of slave labor?  Thus far, crickets.  Don’t hear a thing.

What about Apple, whose CEO is gay, and which just donated $1 million in iPads and other products to LGBT youths?  Apple just registered a blowout quarter in China, with 20% of its sales coming from the communist dictatorship.  Kind of odd to be making big bucks from a regime that now declares homosexuality a mental illness.  We won’t hold our breath waiting for their condemnation.

Where’s Tom Friedman?  The man who wished America could be just like China?  Thus far, no word.

Anything out there to rival President Trump’s strong defense globally for the human rights of gay people, such has his global “Initiative to Decriminalize Homosexuality“?  Or his appointments of gay Americans, such as Richard Grenell?

A look at the record shows that Xiden signed “a directive” to put LGBT rights “at the forefront” of U.S. foreign policy.  No word so far on this judicial ruling.

How about other Democrats?  Thus far, not a word.  Where’s Eric Swalwell?  The special friend of Chinese spies hasn’t been heard from.

The list goes on. China has a lot of defenders, and a lot of people who go silent when it comes out with a human rights doozy, such as this judicial ruling from its non-independent judges.

The Chicoms are on the rampage, seeking to restore the good old days of Mao-style absolute power now that the cat’s asleep at the White House.  They will continue to issue these challenges, making leftist defense-ism of the regime increasingly untenable.

Already by this ruling, America’s Wokesters are exposed as hypocrites.  It will be a long list that follows.